All For Love Australia 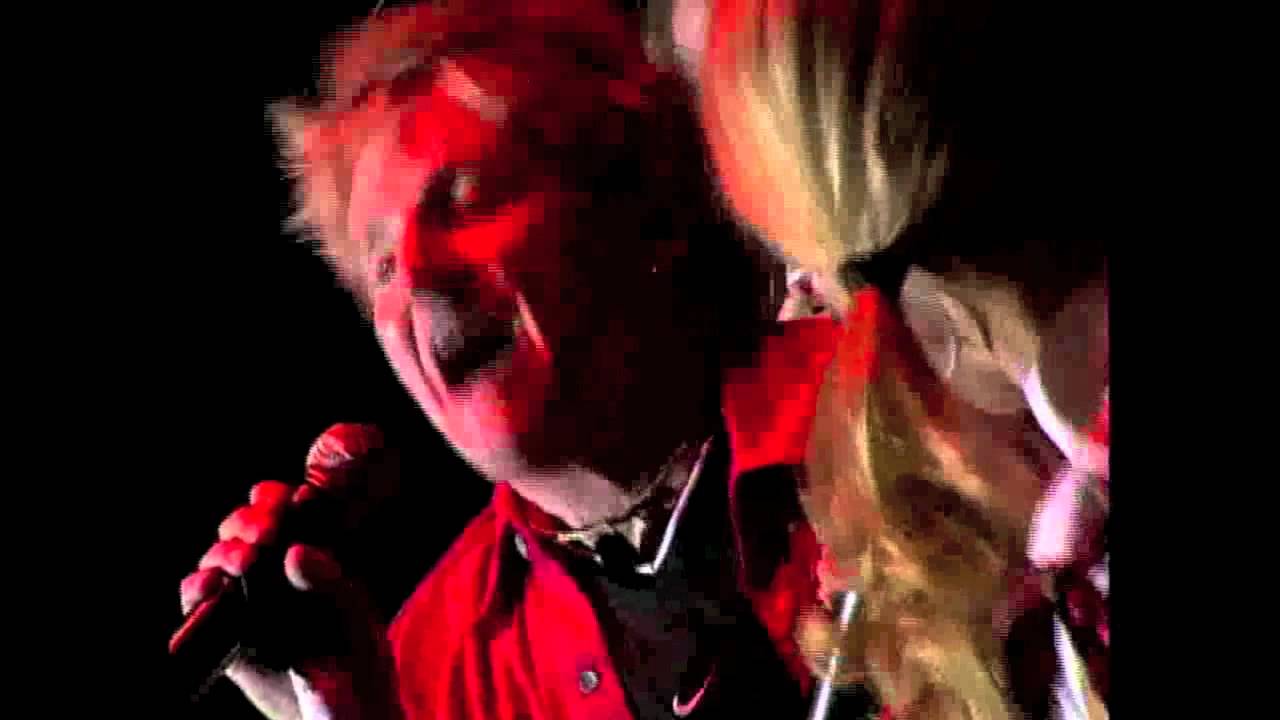 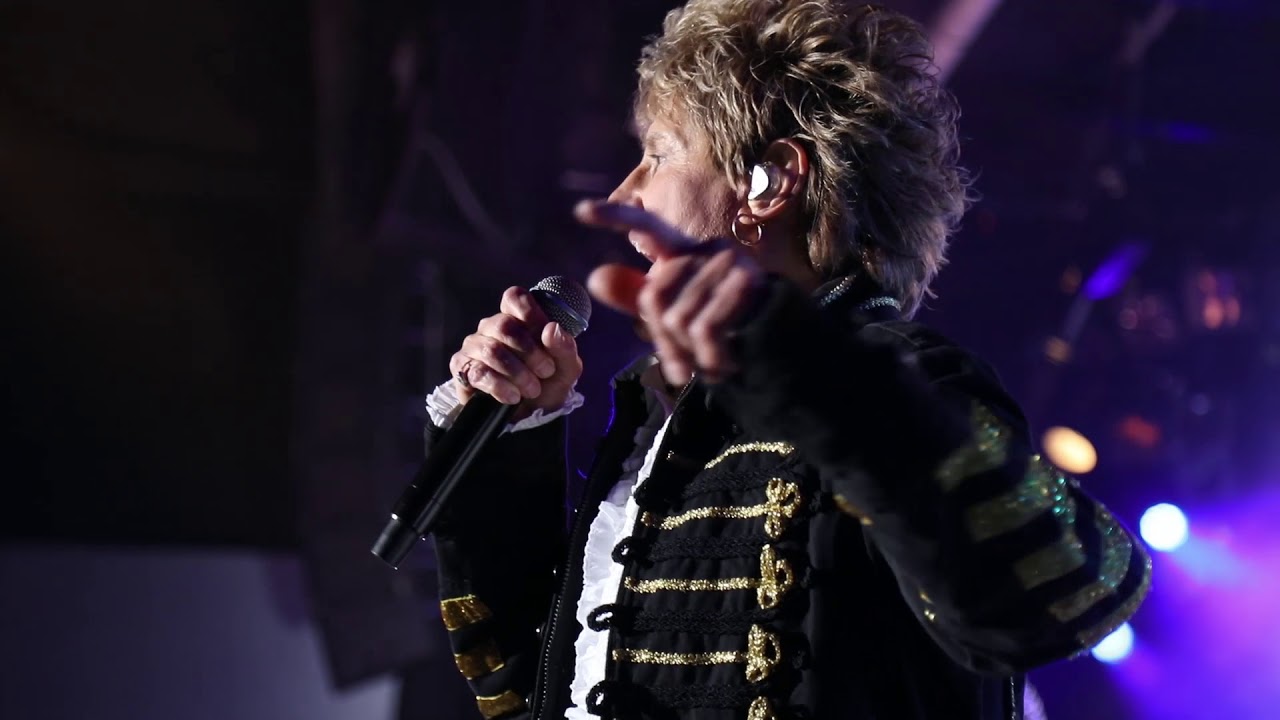 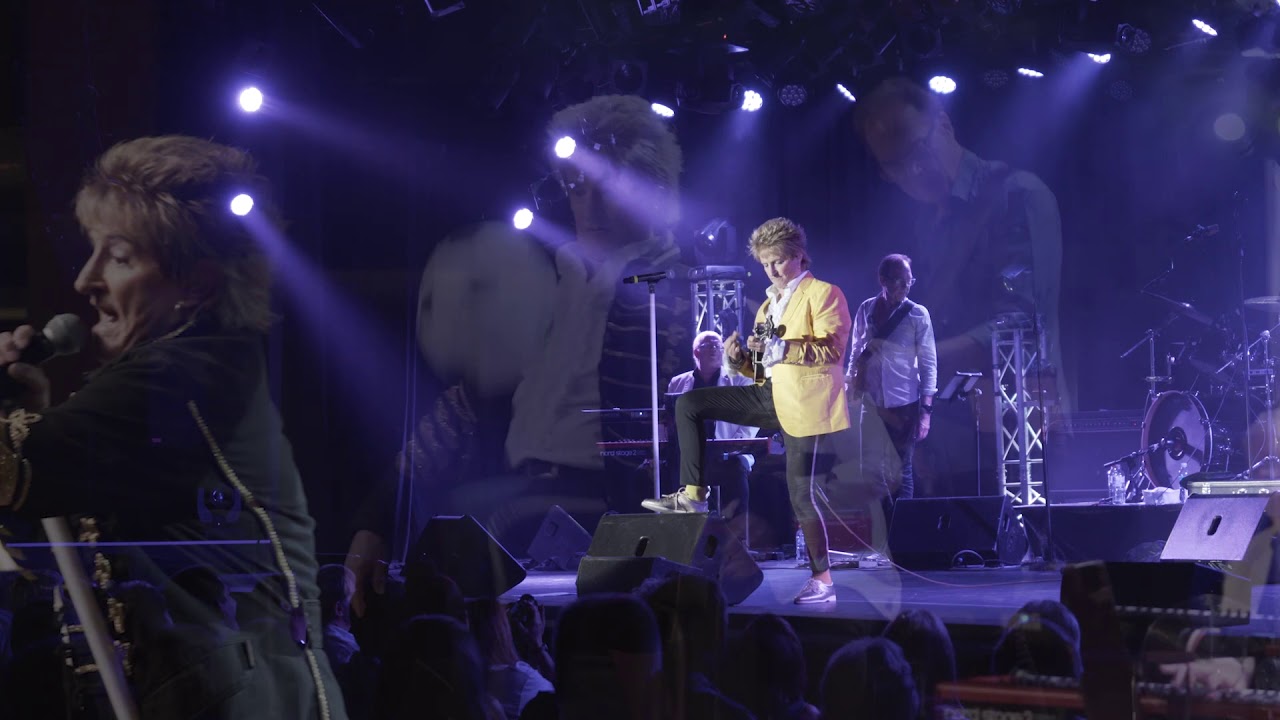 Every Beat of My Heart
Rob Caudill 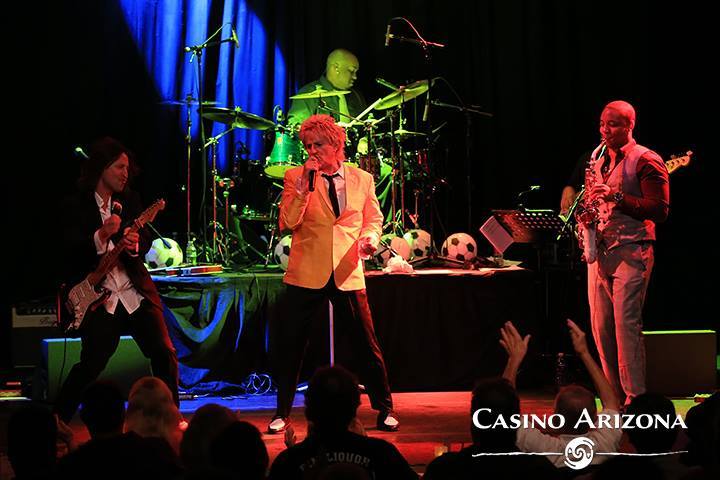 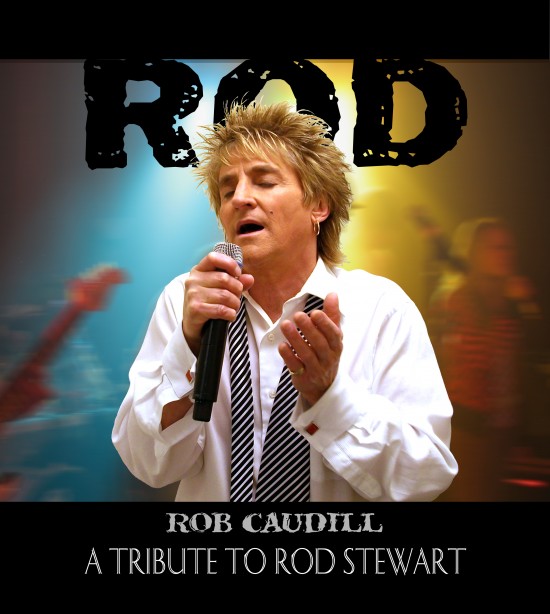 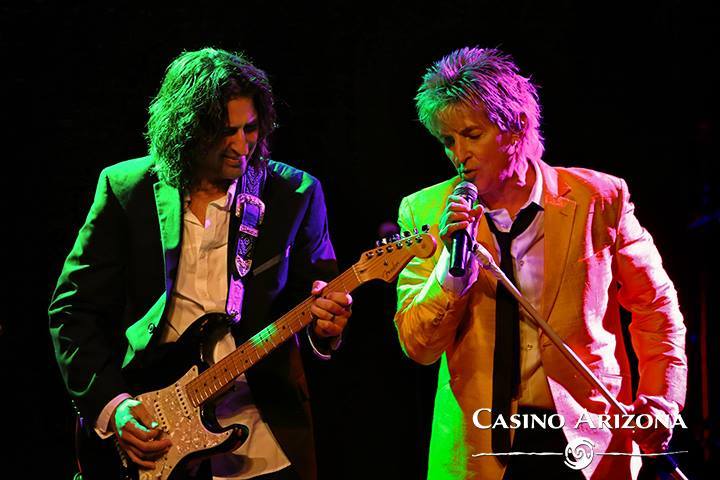 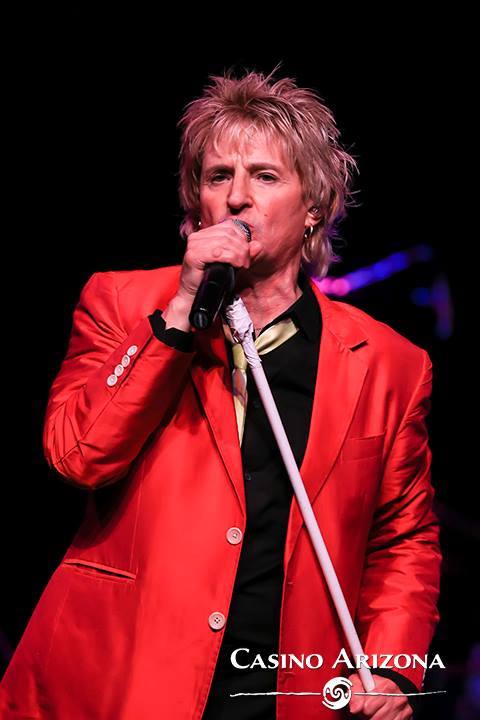 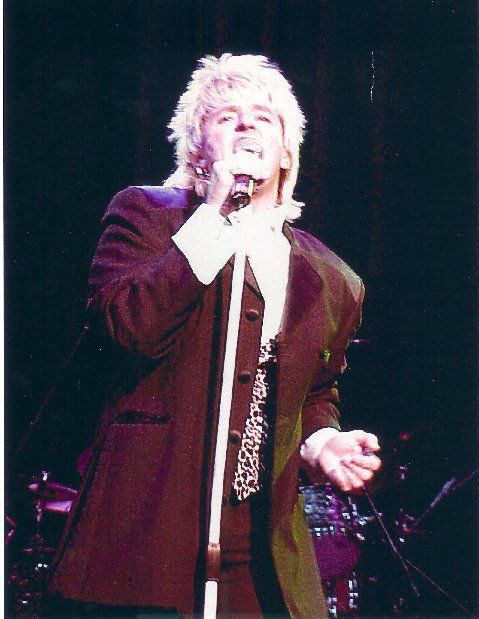 Performing at The Grove In Anaheim 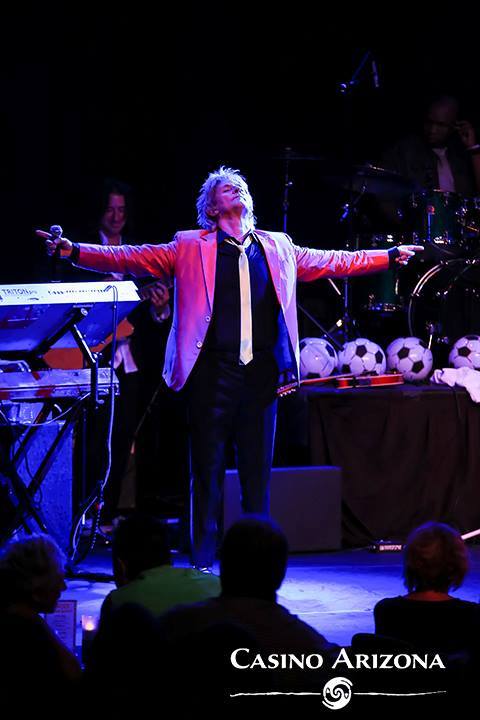 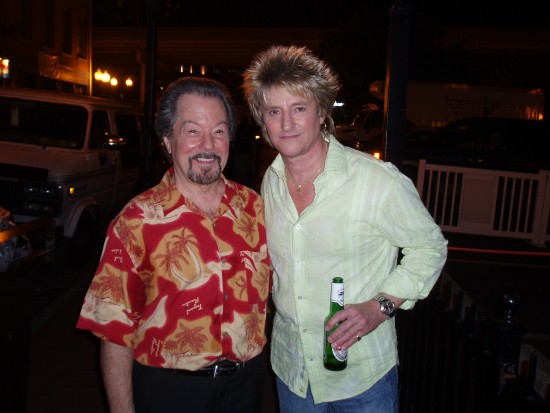 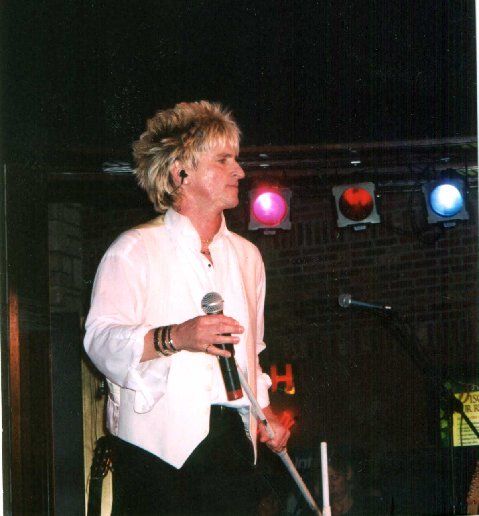 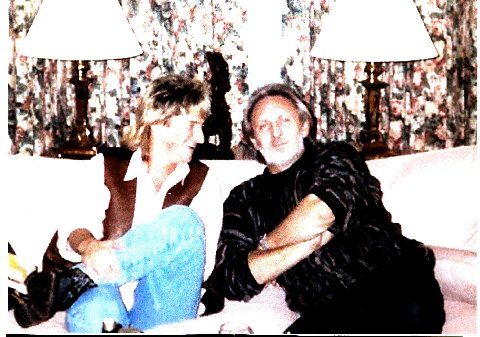 Rob & John Entwhistle from the Who 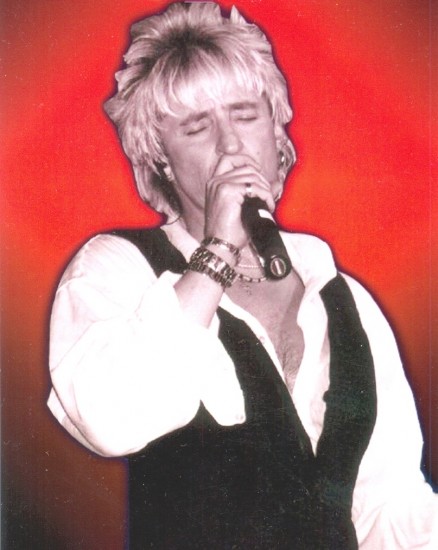 Some Guys Have All The Luck
People stop Rob Caudill in airports for autographs. They stare at him in restaurants. And when he struts on stage, women scream themselves hoarse. Why? Because Caudill is a dead-on Rod Stewart Impersonator.
He's got the high-definition jawline, the shock of spiky blonde hair, but most importantly, he has the nose. Vocally, his distinctive, naturally-raspy voice sounds like the legendary Stewart, and his range easily nails every high note from Stewart's younger days. From kicking out soccer balls to spinning mic stands, to belting out all of Rod's greatest hits. Caudill's high energy show is a must-see event for people of all ages.

Rob Stewart was a fantastic act! From start to finish it was a great experience! He was very informative, detailed, and prompt on anything the band needed for the venue we used.

The show was amazing! Everyone in our group were still asking us weeks later if it really was Rod Stewart! Our CEO was astonished of the talent and production of the band!

If you are wanting a great event with a live performance, Rod Stewart is the way to go!

I have known Rob Caudill for a number of years. Though I have never hired him or he hired me to play with his show, and I would perform with him anytime, I consider him a good friend and top notch professional ! I know the man very well he gives tribute to - Rod Stewart. I have known Rod since 1968 when he was with Jeff Beck and Rod and I have written together four of his hits. "Do Ya THink I'm Sexy", "Young Turks", "Infatuation" and "Crazy 'Bout Her". I was also partly responsible for Rod , Jeff Beck and I recording "People Get Ready" which was a MYV video hit ! Rob is a 6 out of 1-5 - a stone pro !!
Duane Hitchings
Captainhit@Comcast.net

People stop Rob Caudill in airports for autographs. They stare at him in restaurants. And when he struts on stage, women scream themselves hoarse. Why? Because Caudill is a dead-on Rod Stewart Impersonator.

He's got the high-definition jawline, the shock of spiky blonde hair, but most importantly, he has the nose. Vocally, his distinctive, naturally-raspy voice sounds like the legendary Stewart, and his range easily nails every high note from Stewart's younger days. So, it's no surprise this singer has carved out a career 'recreating' Rod Stewart. From kicking out soccer balls to spinning mic stands, to belting out all of Rod's greatest hits - Caudill's high energy show is a must-see event for people of all ages.

When Rob was just seventeen, people started telling him that he looked like Rod Stewart - a phrase Rob would hear repeatedly from almost everyone he met for the rest of his life. He began his musical career after graduating high school and moving to Memphis, TN to study music at MSU. While in Memphis, Rob began playing bass for local bands around town and doing session work.

As bass player for a band called "The Breaks" Caudill got his first major opportunity when they signed to RCA Records. The Breaks' first single, "She Wants You", was played in heavy rotation on MTV music television which caught the attention of Bugle Boy Clothing, who used The Breaks for their first commercial on MTV.
After a few years, The Breaks disbanded, so Rob put together a group called "The Willys" that included legendary guitarist Shawn Lane. They quickly became one of Memphis' hottest bands. Rob also began doing session work with Joe Walsh of the Eagles and jammed with many others such as John Entwhistle of the Who, along with members of Cheap Trick, Allman Brothers Band, Lynyrd Skynyrd, Survivor and Red Hot Chili Peppers just to name a few.

In 1996, he realized he couldn't escape the remarkable natural resemblance to Rod Stewart so he heeded the advice of Joe Walsh and began his tribute career. Rob put down his bass, bought some wild clothing and diligently studied lots of Rod's videos, vocals and mannerisms.

Twistin' The Night Away
Now, more than a 15 years later, he is still spinning his mic stand and kicking soccer balls out to audiences everywhere.

When he leaves town he is armed with his "Tonight's the Night Band," a repertoire of more than 100 Stewart songs (covering everything from the beginning years of The Faces to the Great American Songbooks to all of Rod's current CDs), and a wardrobe of loud, mostly custom made suits that match Rod Stewart's attire to a tee. Rob

He has been working with the world famous Legends in Concert show out of Las Vegas for the past 18 years. He also works independently doing a high energy two hour show and claims "I've got the greatest job in the world, making a living doing something I love."

A true international sensation, Rob has recently performed:
For The Sultan of Malaysia
At a wedding for a Malaysian Princess
At the Miss World Philippines Beauty Pageant
At Autoracing's MotoGP event in Sepang Malaysia
At the AFF Suzuki World Cup Football (Soccer) Matches
between Malaysia and Indonesia in Kuala Lumpur
and Jakarta
He has also performed his Tribute to Rod Stewart all over the
world including
Australia
Cambodia
Canada
China
Finland
Indonesia
Japan
Malaysia
Mexico City, Mexico
Singapore
South Africa
Sweden
Thailand
United States 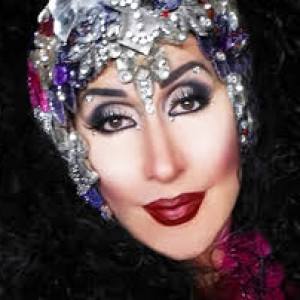 Kristin said “Devon Cass was amazing at my mothers 70th birthday party!!! Everything from his appearance, movements and stories were all so “Barbra” and my guests…”

Patience W. said “Tim was amazing! He was beyond punctual and quick to set up. Everyone loved him and his small talk was great! We asked him to learn a special song and…”