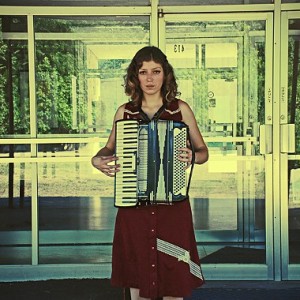 "Olassa has a country/western, folk-pop sound that would make you believe that they have roots in Tennessee or Texas, but the trio are bonafide Kansans and their Midwest mentality shines."

Be the first to review Olassa

"With a Midwest, alt-country impression of Gogol Bordello a la The Moldy Peaches (yes kids, that is that band from the movie Juno), Olassa brings an updated thrift store charm and chemistry to the otherwise straightforward, blue-collar Lawrence/Kansas City music scene. Packing a pretty hefty collection of bass and catchy song-styling, the band’s male to female vocal structures allow them the ability to come out swinging and sock their audience in the teeth, with enough talent and ability to leave a listener enamored with a song. Quite honestly, Olassa is the type of band that is easy to become completely smitten with." - The Deli

When Kansas natives, Allison Olassa and Cain Robberson met on the roads of the Walnut Valley Festival, the stars aligned and, under the Winfield willows, something new broke through.
With Allison’s nearly-naked vocals and, as coined by The Pitch’s April Fleming, Cain’s “jump-on-the-amps-and-play-it-hard” guitar, the pair focused their efforts, polished their sound, and spun straw into gold when they unlocked the secret to blending her vintage Lucinda Williams with his mid-coast Gogol Bordello.
Once more, the stars aligned when, during a fated trip to the grocery store, Allison met a tuba player while shopping for frozen fruit.
[Enter Tyler Bachert - tuba, trumpet, upright, drums] The trio OLASSA was formed.
With Tyler’s classically trained brass on board and having played with The Dave Rawlings band, Chuck Mead of BR5-49 and Brown Bird the trio planted a garden at the intersection of The Felice Brothers and Gillian Welch, and firmly anchored their flag-tipped push pin into the music map with their debut EP – I Love You Come Back to Me
Recorded at home in a farm house in the shadows of an active bottling plant and industrial steel company, the debut album seems to mimic its birthplace – a rare gem built upon a sturdy Mid-Western foundation, smudged with heartbreak and hard work, and dolled up with lace curtains and potted peonies.

William V. said “They are hands down worth every penny they were fun and wanted to be at our weeding did everything we ask of them above and beyond. We ask for a second…”