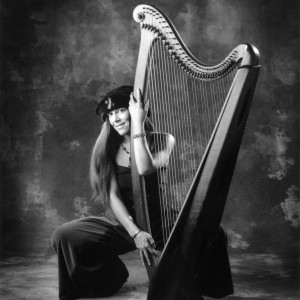 Diana Stork is well known in the Bay Area harp world for nearly two decades for her eclectic style which incorporates world, classical and contemporary harp traditions. She's performed with such diverse groups as the Line's Contemporary Ballet, the Maihar Orchestra of Maestro Ali Akbar Khan, Triskela Celtic harp trio. She can be heard on dozens of albums, including "Harpestry" on Universal Records, and "Sacred Light" on the At Peace Music label. Diana plays a wide variety of harp styles which include: traditional Celtic, new-style Celtic, Traditional and new horizons for Latin harp, Church, Buddhist chants, and other spiritual music, music for Funeral and memorials, Healing Harp, Hospice.

Diana played at our wedding and did a fabulous job! We requested Ed Sheeran's song "Perfect" to be played during the ceremony and she learned it in less than a weeks time and hit it out of the park! She was perfect!

Kurt and Ellis were a joy to work with. Their love for each other was palpable and so inspiring. What an amazing wedding! It was an honor to be a part of it. You two are perfect too!

Diana was so easy to work with and such a lovely person. She played at a celebration of life ceremony for my husband and her music was perfect!

Diana is amazing! She played the loveliest harp music at my wedding. Her communication was excellent. She took the time to help me choose the right songs for the mood I wanted to evoke. She was perfect. Thank you, Diana, for adding such a special touch to the best day of my life!

Dear Avery,
It was a total joy! I loved your family and friends. What a beautiful place!! Thank-you so much for trusting me with the best day of your life. Brightest blessings on your marriage!
With love,
Diana

What a wonderful artist

I worked with Diana to play at the memorial for my mother, and she not only played beautifully, but was such a good communicator, and really was thinking about what would work best at this event.
Highest recommendations!