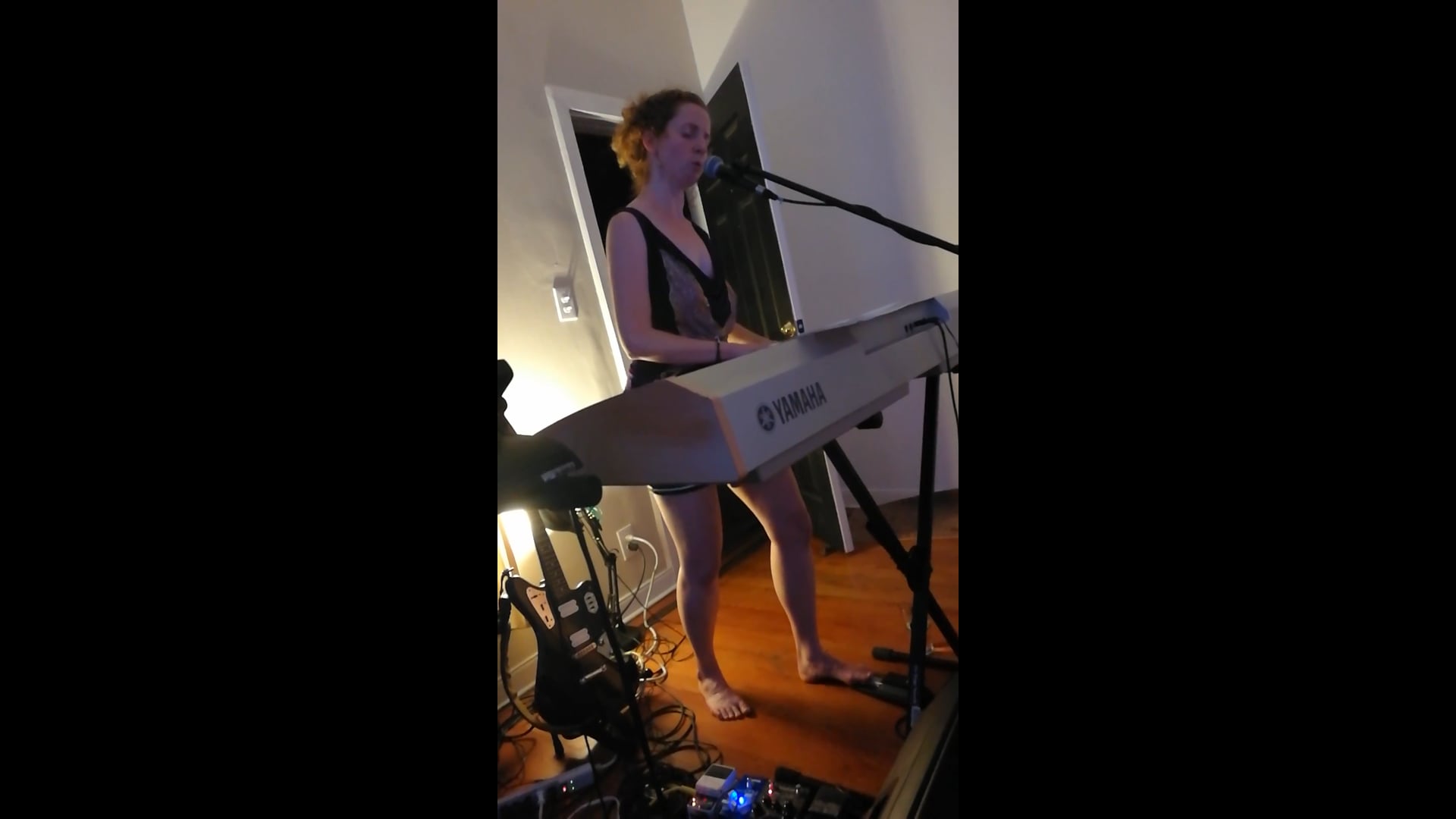 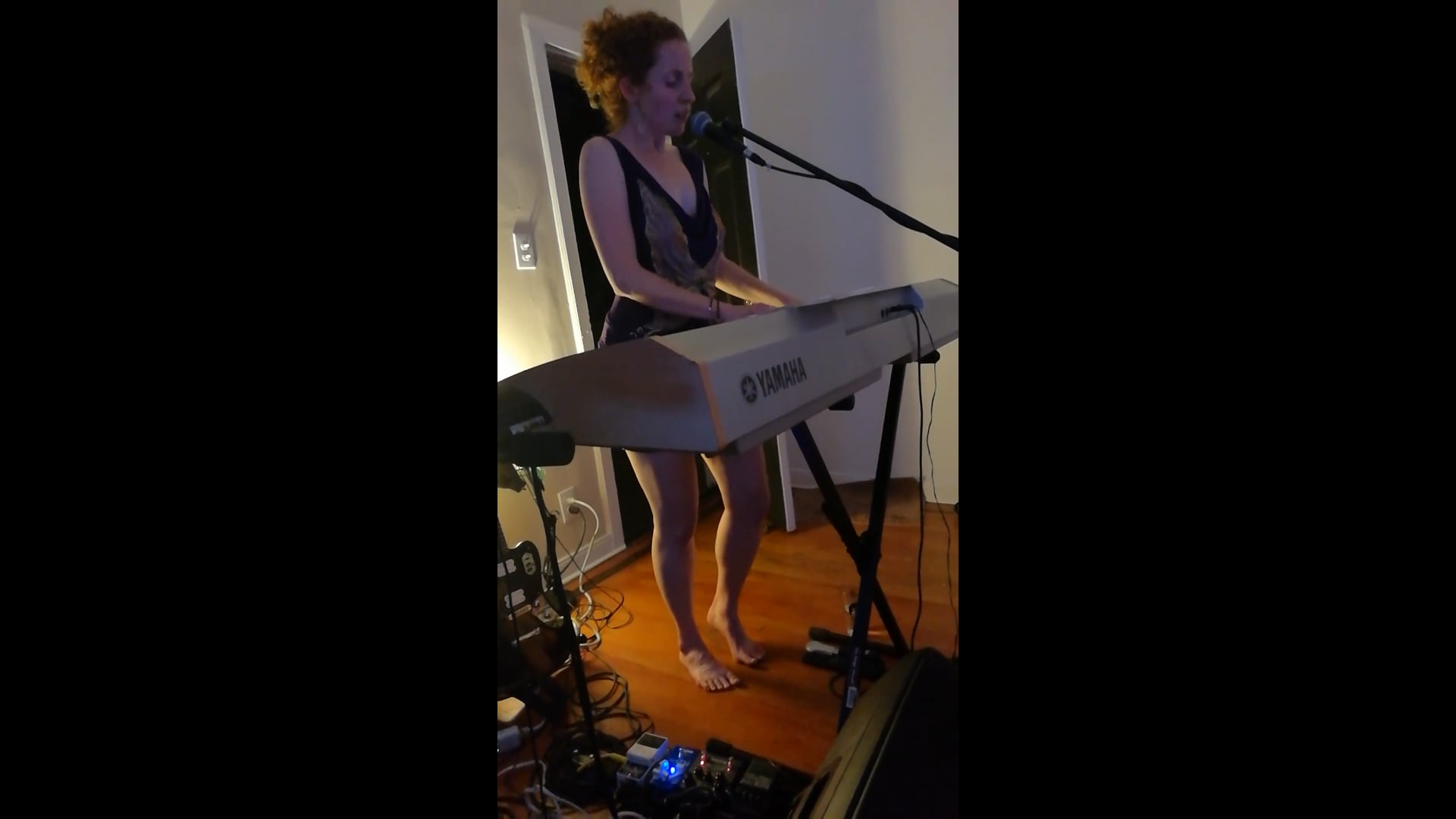 Come Within My Pumpkin House 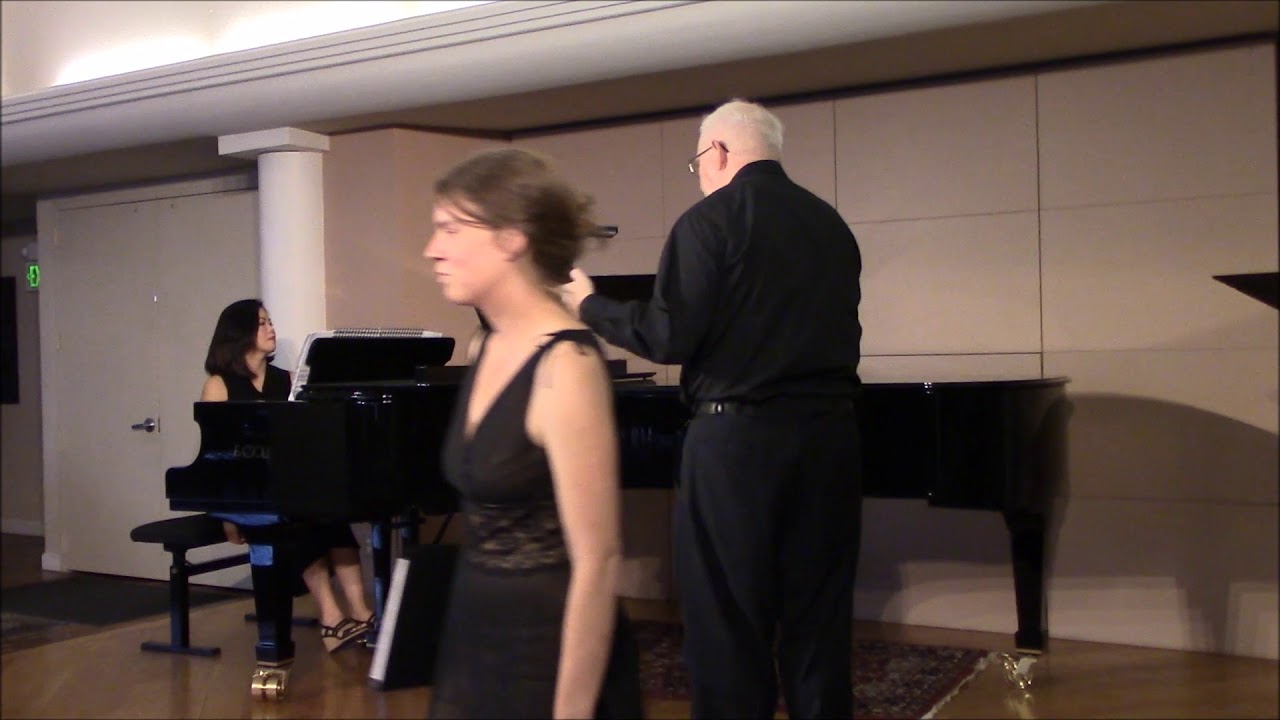 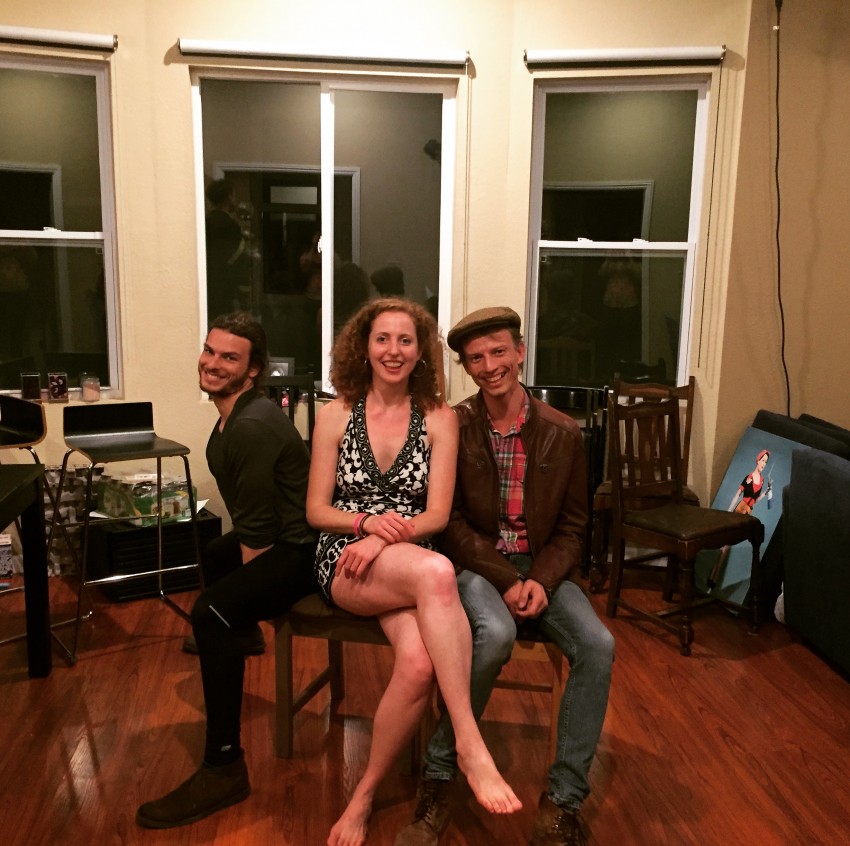 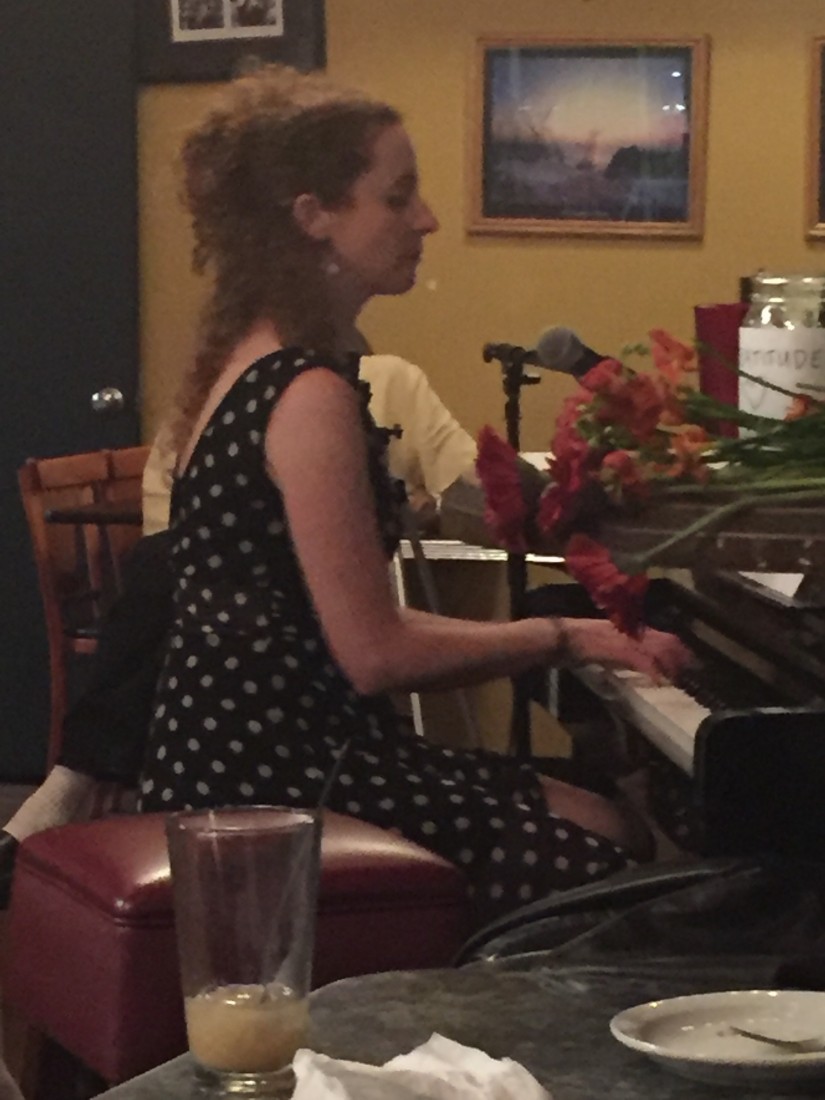 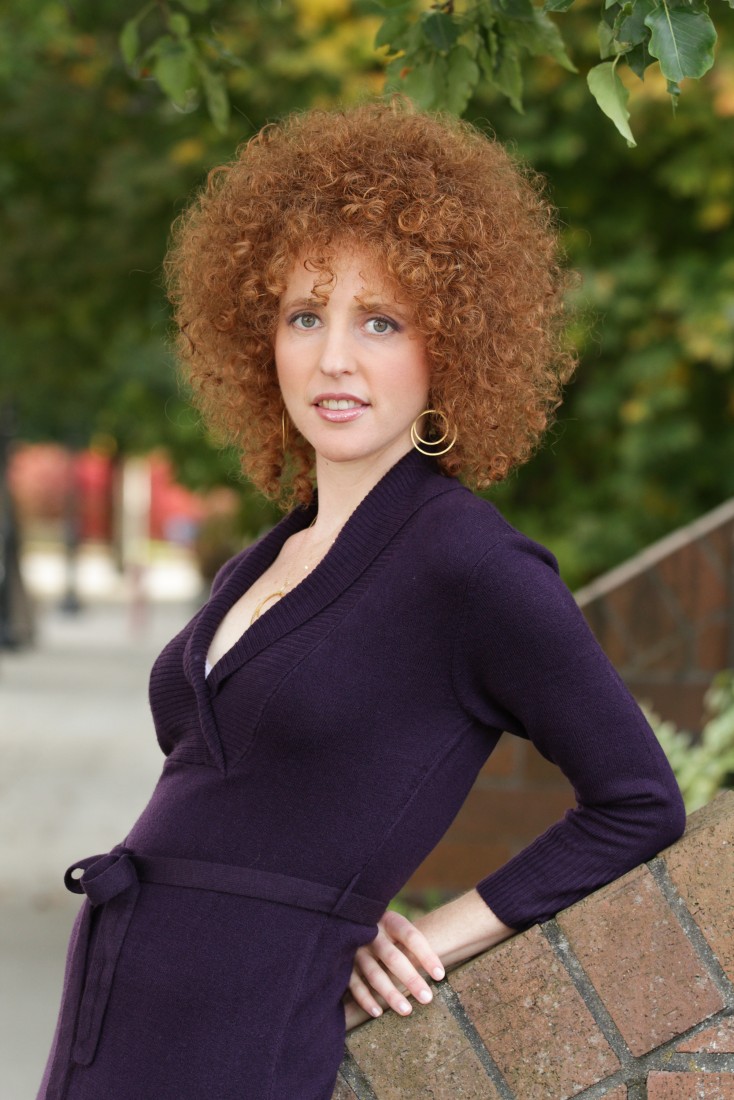 I am a singer/songwriter and can play my original songs, sing cover songs, jazz standards, Broadway show tunes, or pop songs for your event. I accompany myself on piano with my original songs, which are full of fantasy, whimsy and metaphor. With other types of music I can be accompanied by a guitar player.

Carolyn kept full attention from a full house for a full two-hour show. Her voice was pure, audible and expressive. She seem to quickly understand the visual and acoustic challenges of the venue. Thereby she was able to convey a feeling of personal connection to each member of the audience. She had a charming stage presence (despite the lack of a stage). She was neither rigid nor negligent. Instead she just kept telling her stories through music, with a fair amount of audience interaction. And she had a lot of stories to tell. Some of her compositions verged on heart-rending, but there was a balance of moods throughout, so everyone left feeling at least as psychologically healthy as they came in. I was sorry to have to miss her follow-up show a few weeks later, but she is on my watch list for the next chance to hear her perform.

When you book Angel Eyes for your event, whether it's a private party, wedding, or a show at a bar or club, you can expect the highest level of professionalism. They will show up with plenty of time to meet you, set up, and relax before they play. If you want an amplified sound, they have their own 88 key Yamaha keyboard, a sustain pedal, mic and mic stand, an electric guitar and amp, so all you need to provide is the PA. Angel Eyes comes prepared for whatever genre of music is appropriate for your event. Whether it's softly sung jazz standards, the regal sound of famous opera arias, playful Broadway show tunes, or original music full of sweet whimsy and metaphor, they are always fully prepared to entertain the crowd.

Carolyn Arnold is a singer, songwriter and pianist in Berkeley, California. She writes songs in an alternative folk style, somewhere between Joni Mitchell, Natalie Merchant and Tori Amos, with rich and sweet high soprano vocals and lyrics full of metaphor, human connection and fantasy. Friends have described the quality of her voice as “angelic.”

From a very young age Carolyn was surrounded by music. She sang with her family, studied piano, violin and voice through her youth, and began writing songs at age 22. Her roots are in folk music of various kinds; Southern Appalachian, Blues, Folk Revival artists of the ‘60’s and ‘70’s, and Eastern European folk. Other influences include Jazz, Classic Rock, Alternative Rock of the ‘90’s, and female songwriters such as Joni Mitchell, Natalie Merchant, Tori Amos and Sarah McLachlin.

Carolyn’s project that is currently in the works is a live recording of a house concert series she produced, performed and self-recorded in Jan-Feb 2017. In July 2016 she released her first record of original music, produced by recording engineer and musician Benji Marx. In addition to performing her own music, she sings with Resmiranda, an early classical music ensemble, and teaches voice lessons from her home studio.

All of Me
Ain't Misbehavin'
Autumn Leaves
Blue Moon
Bye Bye Blues
Everybody Needs Somebody
I Can't Belive That You're In Love With Me
I Can't Give You Anything But Love
I've Got You Under My Skin
I Wished On The Moon
La Vie En Rose
Let's Dream In The Moonlight
My Funny Valentine
Night and Day
Skylark
Stardust
Stormy Weather
Them There Eyes
What A Little Moonlight Can Do
When Did You Leave Heaven?
You Send Me
Blue Skies
Somewhere Over The Rainbow
Softy As In a Morning Sunrise
Honeysuckle Rose
I Cover The Waterfront

Heart We Will Forget Him—Aaron Copland/Emily Dickinson
The Sun Has Fallen—Monica from The Medium
Must The Winter Come So Soon?—Vanessa, Samuel Barber
Gently Little Boat—The Rakes’ Progress, Stravinsky
Poor Wandering One—Pirates of Penzance, G&S
The Sun Whose Rays Are All Ablaze—The Mikado, G&S
Sorry Her Lot—G&S

A Change In Me—Belle, Beauty and the Beast
Goodnight My Someone—Marian, The Music Man
I Could Have Danced All Night—Eliza Doolittle, My Fair Lady
If I Loved You—Carousel
If I Were A Bell—Sarah, Guys and Dolls
I’ll Know—Sarah, Guys and Dolls
I Feel Pretty—Maria, West Side Story
It Might As Well Be Spring—State Fair
Long Ago And Far Away—Gershwin/Kern
Many A New Day—Oklahoma
My Favorite Things—Maria, Sound of Music
Something Good—Maria, Sound of Music
My Ship—Lady In The Dark, Gershwin/Weill
Part of Your World—Ariel, The Little Mermaid

PA system-including an amplifier and mixing board, a microphone for the piano if you have a piano for me to play.