I want to hire Costumed Characters in Kannapolis, NC

1. Browse Costumed Characters in Kannapolis and contact your favorites

Booking a Kannapolis Costumed Character through GigSalad offers you extra protection you can’t get anywhere else. You can rest easy knowing that your payment is secure, and that we’ll have your back in the event of any trouble that may occur. Learn more 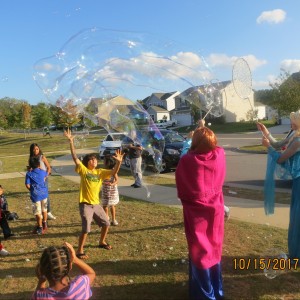 Sherry S. said “Baby shark was a hit a the party, the children loved it.. the face painting was beautiful fast and baby shark keep the kids moving your service was great”

Deidra A. said “We loved having Ms. Believable! Her Cat in a Hat was perfect for our Cat, Hat, & Character breakfast!”

Jessica C. said “Ross came out to our 2 year olds birthday party and everyone loved him- even the 12 year olds! He made flowers, swords, headbands, dogs, hats, and an…”

Mary S. B. said “We had Elsa come to our home during our 4 year old daughter's birthday party to make a special appearance. All of the little girls at the party were starstuck…”

Tyrell J. said “My wife and I had found Genius creations when we were looking for affordable characters to attend our son's 4th birthday party. We seen that the prices…”

Maricel G. said “Jessie came to entertain the children at my Grannddaughters Birthday party. She was fun, interacted well with the children and even got in the bounce…”

Yolanda L. said “Very professional and willing to go the extra mile for your little one to have the party of their dreams! I had a last minute cancel and he was able to…”

You are viewing
Costumed Characters in Kannapolis, NC

Imagine the look on your little one's face when a life-sized version of their favorite character walks into their party! Booking a costumed character can bring a wow factor that is unmatched. Popular characters from television, movies, and books are all available on GigSalad, and waiting to light up the party! Costumed characters are ready for hugs, dancing, photo ops, and more with your kiddo. Plan a party that they'll never forget with a costumed character! Search for Costumed Characters in Kannapolis, North Carolina above.