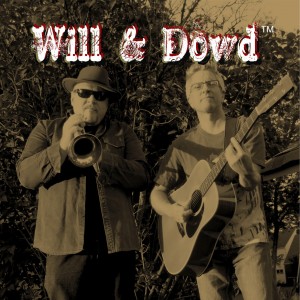 Be the first to review Will and Dowd

We are constantly being asked, "is it just the two of you?", due to our big acoustic sound and multiple instruments. As an Americana band, you may hear shades of many popular American genres within our show and there is something for everyone. Our original songs gather the most acclaim of an evening, and we have CDs available for sale at our shows.

As entertainers, we pride ourselves in our song selection. We purposely do not play the typical songs often heard by bands, in favor of well-written and well-loved songs. From Louis Armstrong and George Gershwin of the 1920's; through Van Morrison and The Beatles of the 1960's and 70's; with a distinctive nod to the many Singer/Songwriter acts of the 90's, 00's and today, such as Matt Nathanson, John Mayer, Crowded House, Oasis and Michael Buble. Considerable improvisation of arrangements and an extensive song catalog makes every show fresh. Will and Dowd adapts to each situation. We are meticulous about sounding exceptionally well, but never too loud.

As feature performers, our original songs are on par with some of the finest singer-songwriters. We have 20 original songs to choose from and are adding new originals on a regular basis. It is through these songs that the Will and Dowd sound is developed. The musical genre known as Americana is comprised of a blend of genres, such as rock, folk, country, soul, blues and jazz. The popular sound of the 20th century is blended together into an entirely new sound.

Michael White is a professional singer songwriter, who has performed and toured with many country artists. He has taught hundreds of students to play guitar and has worked as a session player. While working in the studios of Los Angeles, he met Rande Isabella. The two worked nearly 1000 hours in the recording studio together on various projects in Los Angeles and Nashville. Rande has recently been Assistant Professor of Music Production, teaching at Daytona State College, Belmont University and Youngstown State University. He holds a masters degree in music production and has worked with a myriad of recording artists and musical genres. He is also a recording engineer/producer and has worked as a composer for television.