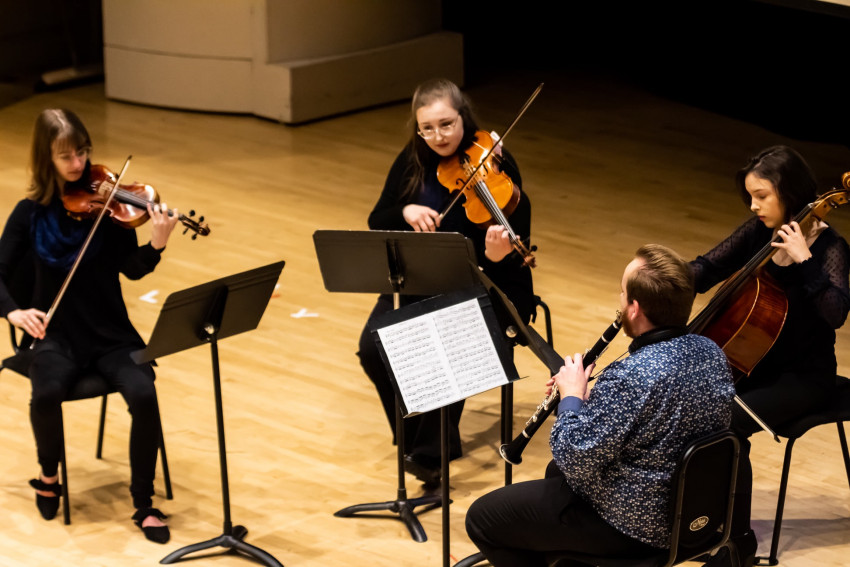 Performing for the Kent State University College of the Arts open house.

Hello! I provide music for weddings, banquets, and other special events! You can book with me if you are looking for a violist, string duo, string trio or string quartet. With advanced notice, viola with piano may also be requested. For your special event, I can perform the music of your choice, whether it is classical, contemporary, pop, you name it!

She was early, she played wonderfully, she was friendly and professional. She added elegance to our occasion.

She was professional and prepared, a pleasure to work with.

Thank you so much for your review, Devon! It was a pleasure to perform violin for your birthday party!

You can expect a versatile and personalized performance, catered to your event and your requests. I am able to perform a variety of repertoire that fit what you are looking for for your special event! You can also expect clear and open communication with me, up until the start of your event. I strive to make your special day and events as stress free and easy as possible. You will have piece of mind knowing that all of the music for your event will be handled with care and professionalism.

VIRGINIA ASHLEY, violist, recently graduated with her master’s degree in Viola Performance from Kent State University. During this time, she served as the graduate assistant for viola. Throughout her time at Kent State, she performed in the Kent State University Orchestra, is the former principal violist for the Stow Symphony Orchestra and performs frequently with the Tuscarawas Philharmonic. She has also performed as the principle violist in theater productions such as Oklahoma!, Little Women, Cinderella, Into the Woods and Beauty and the Beast during employment with the Kent State University School of Theatre and Dance and Porthouse Theatre. Her masterclass performances include those at the Ohio Viola Society Day in 2010, 2012 and 2013, as well as with Jeffrey Irvine, faculty at the Cleveland Institute of Music, in 2016.
Virginia is an active freelance musician and has performed and recorded in numerous locations around Ohio. Most notable of those are the 2018 North American Saxophone Alliance alongside saxophonist Bobby Selvaggio, recording work on the Kent State University Stark campus in 2018, Severance Hall in Cleveland, and many more. Along with freelancing, Virginia is a teacher. She is currently the violin and viola instructor for Lakewood City Schools.
Virginia graduated from Lakewood High School in 2014, and subsequently went on to receive her bachelor’s and master’s in viola performance in 2018 and 2020, respectively. Her viola instructors include Lisa Whitfield, principal violist for the Indianapolis Symphony Orchestra Yu Jin and Cleveland Orchestra violist Joanna Patterson Zakany.

When booking for an event, it is helpful to know if the event is indoors or outdoors, and what type of venue we will be performing in. Myself and the other musicians that you may book will handle setting up and moving all of the necessary equipment, so all you have to worry about is giving us the necessary details so that we can properly prepare!

Below is a list of some of the most commonly requested and performed pieces. This is NOT a complete list, and repertoire can be requested with at least a weeks advanced notice.