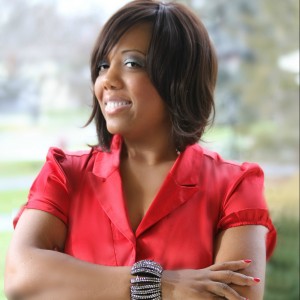 Nationally known writer Vanessa Lynn shares her experience as an unemployed single mom that has now built a solid reputation as an urban/inspirational producer with two titles nationally distributed (Affairs, Unequally Yoked) and another upcoming title "Boss Lady." Vanessa went through tremendous obstacles in her life and despite not even having transportation was able to form the Urban Playwrights United where she is training and developing the next generation of artist. Her new release "Beyond the Chitlin' Circuit, The Ultimate Urban Playwrights Guide" is a hands on resource for aspiring playwrights. Vanessa speaks about entrepreneurship, faith, and women in business among other topics.

BOSS LADY was 1 of the most captivating and amazing plays I've ever seen!!! You are definitely anointed!! I'm a aspiring playwright and movies. I'm a singer,songwriter and actress. I'd love you to be on my radio show and web tv series coming soon but more and importantly I'd love you to do my life story. Google Angel Cilly Cell Woods or THE CILLY CELL PROJECT INTL to learn more about me and my story. I promise it's worth your time!! I was healed from Sickle Cell. Thanks for your time in advance!! You're Amazing!!!

A very lively interactive discussion that can fit any demographic or age. From elementary school to seniors.

If at first you don’t succeed, give up. Right? Wrong! When founder, visionary and playwright Vanessa Lynn shared her first script for a play in 1995 with her mentor, she found everything but encouraging words. Crushed by criticism, she continued to pursue her career in corporate America with a Fortune 500 company. Even though she fell in love with theater at a very young age after witnessing Broadway hits such as “Annie” and “The Wiz,” she tried her best to ease her yearning for the pursuit of a career in theater.

In 2004, unforeseen tragedy struck her life and things began to take a downward spiral, both personally and financially. When her world came crumbling down, she found herself without a home, without a business and she even lost the desire to live. While many would have given up and complained, it was only after a layoff from her corporate job that she revisited the untitled play she had written in 1995. No longer having the script and only her memory to go by, Lynn typed non-stop for two days to complete the rough draft of what has today become known as the famous stage play, “Unequally Yoked.”

After suffering through many trials, setbacks, careless mistakes, lack of funds and lack of transportation, “Unequally Yoked” opened in August of 2006 at the Dearborn Ford Performing Arts Center to a sold-out house. Since then, Vanessa has remained steadfast on accomplishing her childhood theatrical dreams and has obtained unimaginable successes.

Since “Unequally Yoked,” which is now a national bestselling DVD (garnering a Top 20 Amazon African American Cinema spot for over a year), there have been several ground- breaking shows she has birthed, including: “Affairs,” a murder mystery set in the south that was ultimately labeled a “game changer” for including elements such as police work and forensics (national release date 2013); “Deranged,” a comedy suspense thriller about a nanny with ulterior motives that was performed in Toronto, Canada; and Angela Barrow-Dunlap’s “Church Girl,” (contributing writer) the hit national touring stage play now seen on BET. Most recently, “Boss Lady,” the life-changing powerful saga, has the country buzzing and is also available on DVD! Vanessa has also produced several short films and has several projects in development, including: “The Sisters Collective,” “The Call,” “Pretty Young Thing,” and a sequel to “Unequally Yoked.” Lynn has had the honored experience to work with celebrities such as Robin Givens, Angela Winbush, Ginuwine, Keith Washington, Carl Payne, Karen Clark-Sheard, Kel Mitchell, Demetria McKinney, and Tony Grant to name a few.

Her debut book, Beyond the Chitlin’ Circuit: The Ultimate Urban Playwright’s Guide, is the first book of its kind and speaks to the myths, the challenges and the successes of the urban playwright industry. She currently serves as the CEO of Parables Entertainment, a comprehensive professional writing and consulting firm. Lynn is also the founder and CEO of Urban Playwrights United (UPU), where she helps playwrights nationwide perfect their craft and gain worldwide exposure for their works. Picking up beauty from the ashes, which she was given, Lynn continues to serve as a public speaker, script and content writer, mentor and theater consultant.

Flip Chart or Dry Erase board