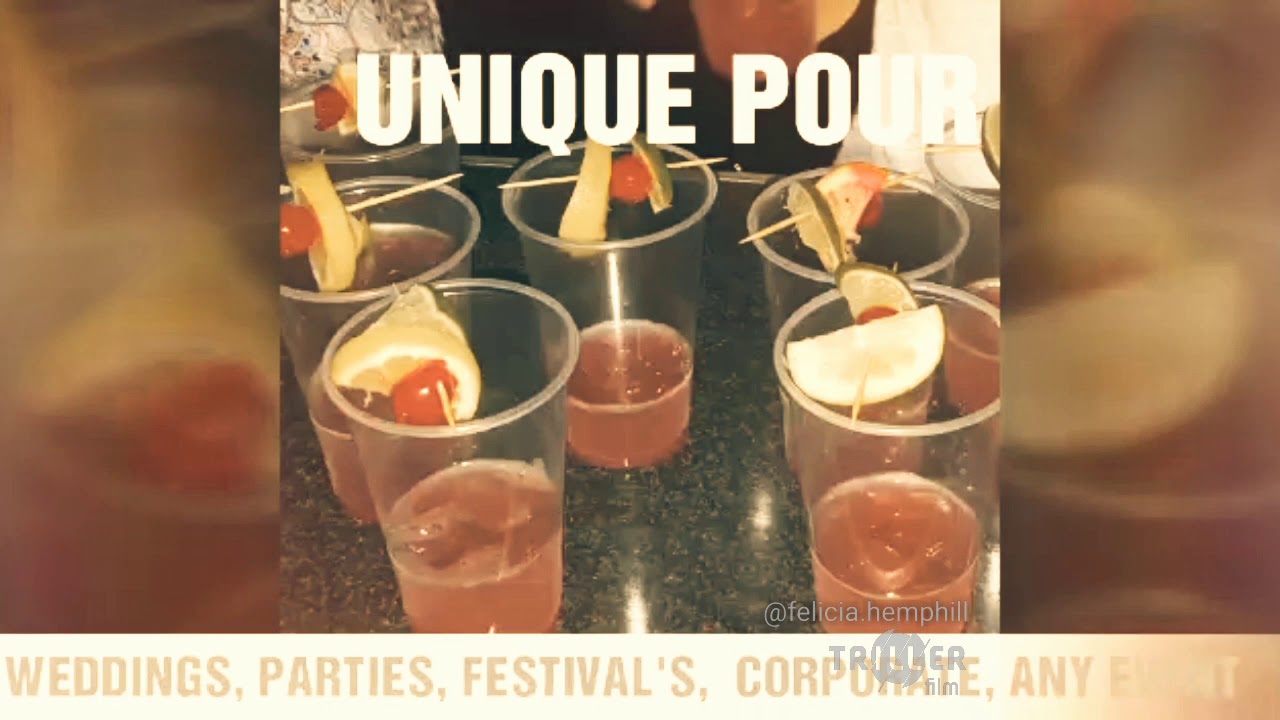 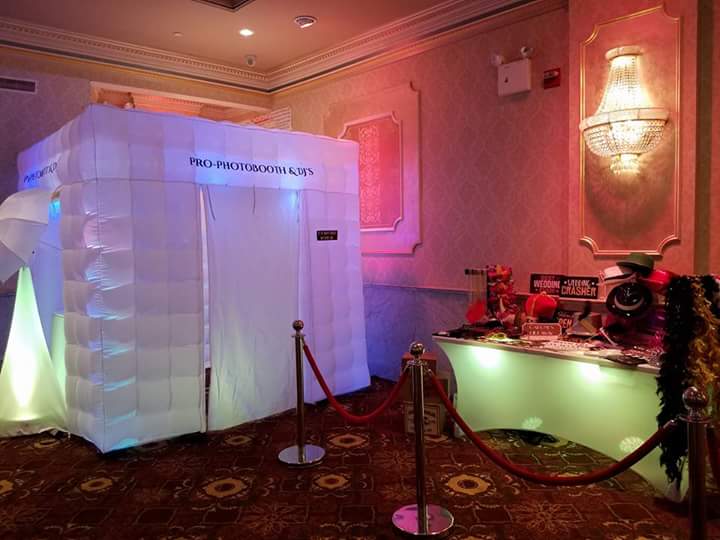 Coffee Bar! (The Turn Down)

Unique Pour is a mobile bartending & event service. We focus on providing high quality professional bartending services for any occasion. With the use of our natural house made mixers your party will be a hit. We know what it takes in order to provide a unforgettable experience for our clients. At "Unique Pour" we create a customized experience as well as preset packages for each of our clients, based on their specific party/event needs. We realize that no two parties are the same and each requires its own special attention to detail. We are a high quality service for clients who enjoy VIP treatment.
Weddings, corporate events, launch parties, private in home events and many more.

I hired Unique Pour/Felicia Hemphill, several months before our 50th High School reunion, to be held on September 21st, 2019. At the time of contacting her, we had about 80 people signed up to attend. I was quoted $400 to have one bartender and one bar back. I paid her through Venmo. When we were up to 150 people attending, I contacted Felicia and gave her the updated number. She then told me that we (the reunion committee) would need to pay her an additional $250 so that she could have one more bartender at the event.
I paid her the additional $250 through Venmo. On the day of the event, the committee spent most of the day setting up and preparing for our big event, which was to start at 7 pm. We were told that Unique Pour would be there to set up, no later than 6:30 pm. At 6:15 pm, they still had not shown up and just as I was getting ready to call Felicia, I got a text message from her telling me that there was an emergency and that they were sending us a "mixologist" (one person) to handle the event. I was obviously very upset and stressed. There was only one bartender, instead of the 3 (2 plus 1 bar back) we contracted and paid for. We had been promised that the limes and lemons would be prepared prior to the event starting and that wine and beer would be organized into tubs, put on ice and that there would be ice for the drinks as well. When guests started to arrive, there still wasn't any ice for the drinks and the bar area was still being set up. People had to wait to get a cocktail We had to beg our caterer to step in with her assistants and put in an extra 2 hours of time that we ended up paying for. They agreed and the caterer left the event to buy ice. The caterer had to prepare an area for our classmates to self-serve themselves for soft drinks and water, which was supposed to be included in the services of Unique Pour.
Long story short, the one bartender did do a good job and he got lots of money in tips, but we feel we should have been reimbursed the $250 extra we paid for the extra bartender. We requested this of Felicia and she refused. We did't even ask fo the money back for the bar back, just the extra bartender.
The stress this caused us just minutes before our event was uncalled for. Unique Pour didn't hold up their end to the terms of our contract. We would never hire them again!

Yes it’s true, about the 2 bartenders, It was a fatal accident we suffered a lose. We understand your point, We made quick decision and pulled Our best, rather than have replacement staff be late, But we sent a Top Mixologist that was above the average bartenders, that could handle a crowd of 200 & more with no problem, That we charge, starting at $750.00 for events, That we covered.He did an outstanding job, We have pictures to prove guest had cups and enjoying themselves, All the guest was happy and no long wait time, With lack of knowledge in this industry,We tried to explain this bartender is very capable of doing a job that 3 bartenders could do, (That no other staff from your side helped him do anything, it’s ironic how you now say this and claimed you had to pay them for 2 extra hrs on our behalf, He left his space very clean didn’t need any help to setup, serve nor clean. As expressed We would have booked him from start but it would have been more costly, for what your original budget was.He’s one of our Specialty bartenders, We truly thought it was the best decision at hand. & under the unfortunate circumstances. Tracy please be truthful ,beverages were not in your contract nor was ice or tubes, you asked last min about a tub, that’s was courtesy only. We stand by our work, You threaten to make bad reviews and have your staff who I’ve never had any contact with request money. We did business with Tracy & wasn’t never paid through any committee , but multiple people from a committee is requesting a refund, in which Tracy should be the only person we deal with in this situation. We appreciate all reviews, but it’s unwarranted to place such a untruthful review. To collect on a personal level , but now involved your committee to unlawfully diminishing our company.
Unique Pour
Team

The staff was professional and polite, if had such a wonderful experience with unique pour that I will be referring my friends and family members, Thank you for making my even spectacular

The Staff at unique pour was outstanding; They went above & beyond to make sure our wedding day was memorable! They’ve provided excellent decor & Bartending. I highly recommend. Thank you Again for the Great Service!

I hired bartenders, barback, and drinks for my Wedding Day. This company seemed legit with multiple reviews on multiple wedding website. Felicia responded to my emails and texts and she seemed like she knew what she was doing. In fact, I even purchased decor and chairs for my wedding. Everything was paid for ahead of the time and guess what -- on my wedding day, No One Shows Up.
All of a sudden, I can no longer reach Felicia via phone or text. No back up numbers to call. Can you imagine, your wedding is about to begin, and the vendor that you paid for doesn't show up? It was horrifying. She did eventually call me back on my wedding day, after it was all over. She said there was some emergency. Even though it was extremely unprofessional -- I mean, where were her crew and bartenders if she had an emergency? -- I thought I would be a good human being and work with her and get my refund. It has been One Month since my wedding day and she is no longer picking up my calls or returning my texts. This is so wrong. Stay Away.

Update 6/23: the below response makes the company appear reasonable. However, despite multiple phone calls and emails, again, no response and no call returns. if you've made a mistake, then own up to it and properly respond and refund before worrying about online reviews. do you have a company policy when you NO SHOW to an event? i would hope it's a prompt refund and apology if you're a legitimate company. if you had the time to respond to this review, you had the time to respond to my phone calls and emails.

Update 7/6:
It's incredible that you ignore my emails and phone calls and yet you update the reply on this page. Privately, no accountability, and publicly, you're so responsive. I have not received a single call back from you or email reply, despite multiple calls and emails. These aren't prank calls -- they're business calls. If you don't want me calling, you should pick up and respond. I was NOT refunded a single dollar. I have my receipts that show I paid you. Where's your receipt that you refunded me? You have NOT dealt with this. I don't want to harm your business; however, if you're an irresponsible company lying to public, then public deserves to know. I am asking for my refund, that's all.

We’ve Responded on numerous occasions!
We’ve addressed this matter! For you and your affiliates to continue to prank call , email, attempt to place multiple Bad reviews is Ridiculous, We’ve addressed this matter, refunds, it’s simply no need to continue doing this! Again Our Apologies to you again on this unfortunate matter, as our crew showed up day of. After crews trailer was towed, it was impossible to perform without materials, We stand by our policies, refunds. We’re normally known for our exceptional attention to detail, and we regret that we missed the mark.
Thank you
Event management

Thank you, Cece, for your attention to detail, you wonderful welcoming demeanor, and your ability to handle multiple tasks at one time!

Thank you for allowing Unique Pour to be apart of your special event! Staff member CeCe reply it was a pleasure working with you!
Thank you again!
Best Regards Unique Pour

Thank you for allowing Unique Pour to be apart of your special event.
Hope to do bussiness with you again.
Thank you
Felicia
UP

I loved having Felicia a part of my big day! My family really enjoyed having her there too! The sweetheart table was so beautiful! It was a great time.

Thank you
For allowing Unique Pour to be apart of such a special event, We enjoyed ever minute of it, Enjoy your new union, hope to work with you again!
Felicia
Unique Pour

The owner of Unique Pour, Felicia, personally did our wedding in Fort Bragg, CA and could not have been better. From the outset communication was great and her prices were very reasonable. On the day of, she and her husband did an amazing job, The drinks were great and the service was timely. They even wrote us a sweet card for our wedding day. I would highly recommend Unique Pour for any event.

Thank you! It was a pleasure working with you, we are excited you had a wonderful time and was able to be apart of your special day, and hope to see you in future adventures.

Unique Pour did a wonderful job at my event. They are friendly, make fantastic drinks and go above and beyond. I’m thankful to have found them. I’ll be calling them for future events and I hear my friends will be too. Thanks Unique Pour for making my event so successful!

Hire a Unique Pour & Designs, is a mobile bartender or Cocktail Server Event decor co. Specializing in custom backdrops, celing drapery a ONE -STOP- SHOP For all your
party, wedding or events. make your event the talk of the town! Unique pour is now in Norhern Ca. Originally from N.Y. City. With over 5 years experience. We are affordable Mobile Bartending & Design's and Event Service, dedicated to superior customer service. We offer one hour to set up/ break down at NO additional
charge to you! Give your guests something to talk about as they are
professionally waited upon with delicious and exotic drinks. Glamorous decor, backdrops. our
Bartenders/Servers are certified in Techniques of Alcohol Management (TAMS),
Training for Intervention Procedures and/or Serve Safe. (TIPS)
Our designer's are certified
We are insured
We always keep your budget in mind.
"BE A GUEST AT YOUR OWN PARTY"