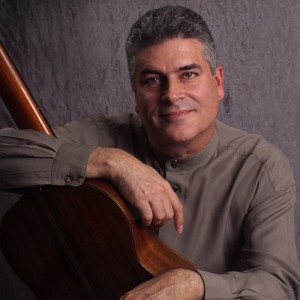 A Classical Guitarist performing a variety of classical music and standard popular arrangements for wedding ceremonies. I am performing in the Great Hall at the Omni Grove Park Inn and Resort Sundays from 10:00 am to 12:00 pm in Asheville NC.
My 12th season there. It is free and open to the public and a great place to select music for your ceremony as well as through Skype.

Be the first to review Two Guitars

Lou Mowad holds a Master of Music degree in Guitar Performance from the University of Arizona, a Bachelor of Fine Arts in Music from Florida International University, and an Associate of Arts from Miami-Dade College. All his degrees were acquired on performance scholarships. He has studied with many of the world's greatest classical guitarists and teachers.
In addition, he has been asked to adjudicate competitions for the Music Teachers National Association and the Guitar Foundation of America. He has been on the faculty of Florida International University, Barry University, Miami Dade and Broward Colleges, and the New England Music Camp in Maine during the summers.
Together with his wife Yasmin he has toured throughout the world with performances in Hong Kong, Taiwan, and a five city tour of South Korea. They have also performed on television, radio, and premiered many new works for the guitar, including the Concerto in D Minor by Francis Kleynjans, dedicated to the duo. They have also been recognized and recommended by the National Endowment for the Arts and have received numerous grants and awards. ((link hidden))
As a teacher, his students have studied and graduated from many of the finest music schools, including Indiana University, Florida State University, the University of Miami, Boston Conservatory, Barcelona Conservatory in Barcelona, Spain, the Franz Liszt Hochschule fur Musik in Weimar, Germany and the University of Arizona to name a few.
Lou currently resides in Asheville, North Carolina and is currently on the faculty of Brevard College in Brevard North Carolina and has private studios in Asheville and Brevard N.C.
Review:
“Guitarist Mowad can come back anytime”
“Lou Mowad is an explorer; as he plays his guitar, he seems to be asking himself, "What can this marvelous instrument do for me next?"
The first half of his recital was devoted to J.S. Bach - the Suite in E-minor, BWV 996, and the Fugue, BWV 1001. Mowad's performance had absolutely nothing to do with Baroque performance practice. Without sighing and swooning, it was un-ashamedly romantic.
His way with the suite was magical: a free and improvisatory prelude, a delicate al- lemande in which he seemed barely to touch the strings, a saraband given to mulling over past regrets, a resolute bourree.
In the fugue, he employed the tonal variety of an organist testing his instrument's stops. Each episode had a different character, first mysterious, then striving, then searching. It was as if Bach had handed the fugue to Beethoven for a rewrite. Mowad's gently nuanced manner is naturally suited to the Spanish repertory. His sole Iberian foray was Joaquin Turina's "Fandanguillo." Slowly and rhapsodically, Mowad appropriated the music as his own; he could have been improvising in the style of Turina.
He brought his usual warmth and sense of wonder to a pair of contemporary English works, Sir Lennox Berkeley's "Theme and Variations" and a partita by
Stephen Dodgson.”
By James Reel The Arizona Daily Star 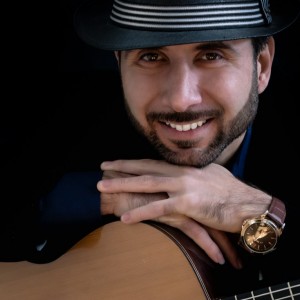 Joy M. said “Vadim was totally awesome! He helped make our event elegant and special. We would highly recommend him for any event! Very Professional!”

Dean W. said “We really enjoyed the music. Made a perfect pairing with our holiday party.” 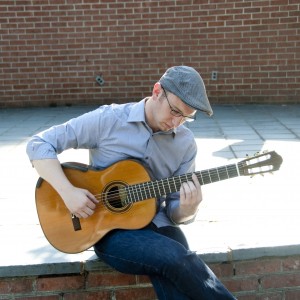 Claire C. said “Andy was amazing for our wedding ceremony! He was communicative and played incredible music that we requested. Highly recommend!”

Alexis T. said “Sam was such a great addition to our micro wedding in Asheville. He was very responsive and took the time to get to know my fiancee and I. He ensured…”