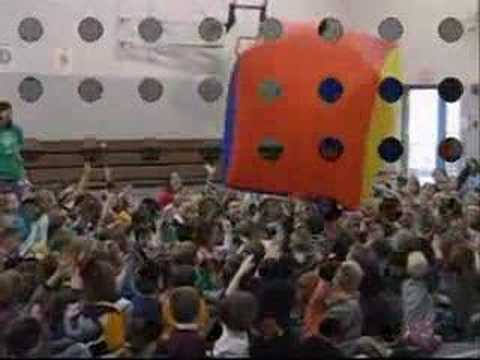 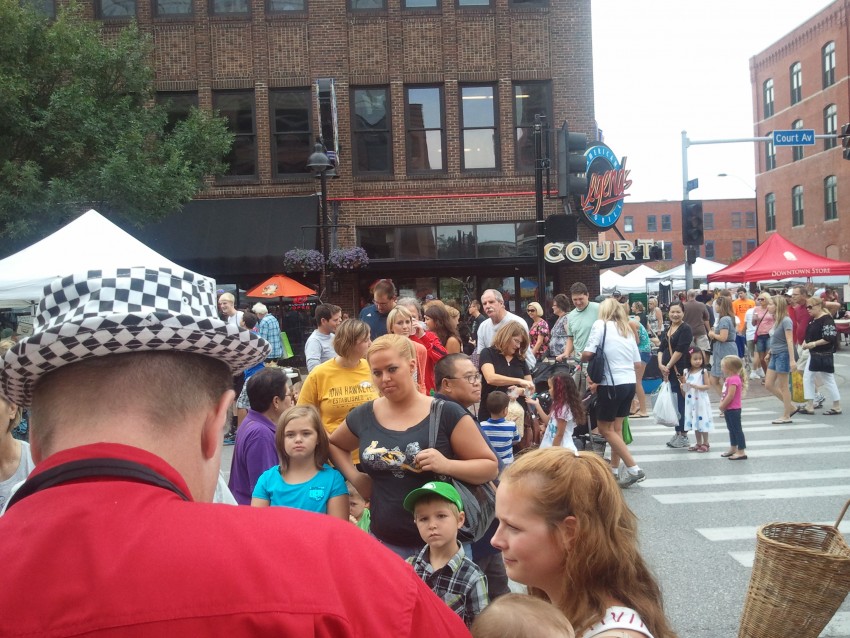 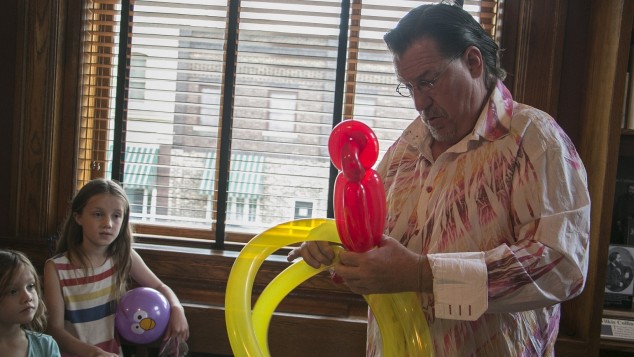 Lots of laughs are given away along with balloons 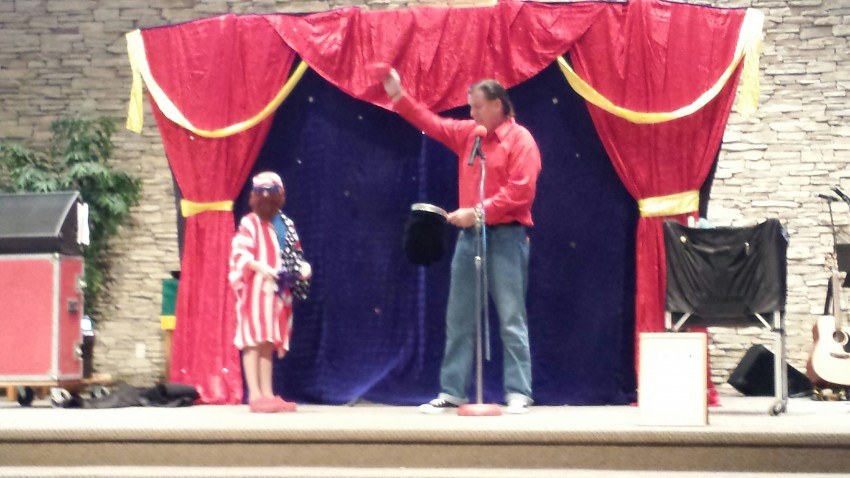 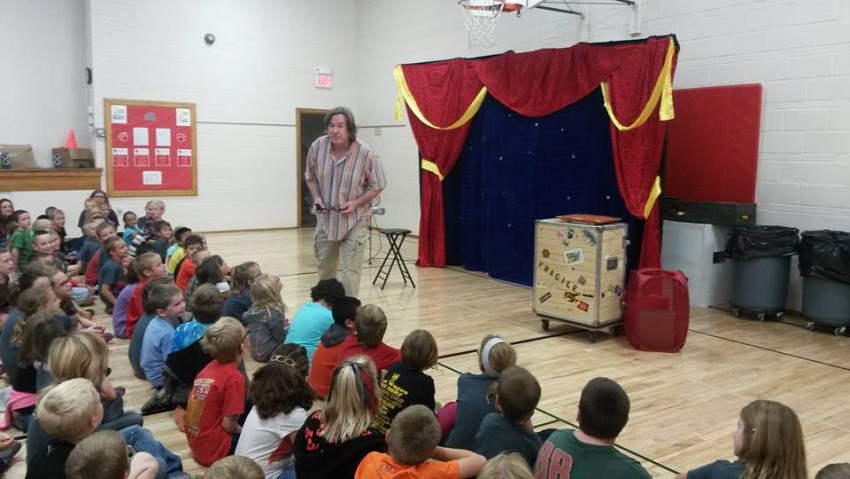 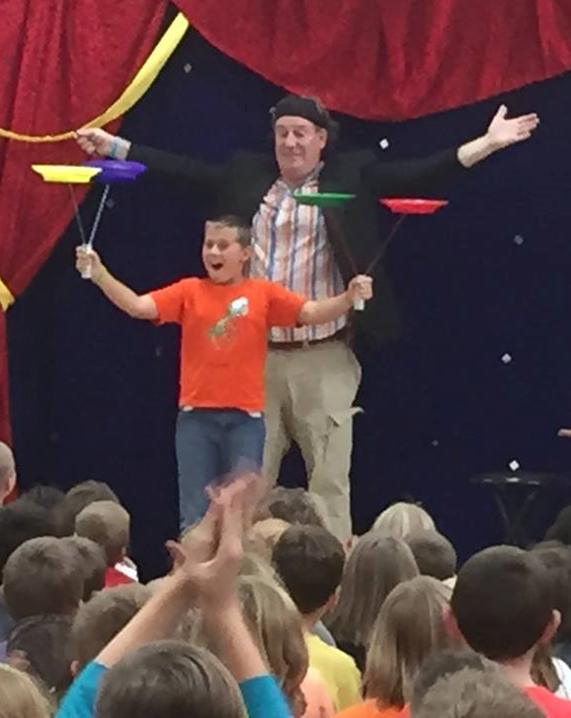 Making the kids the stars 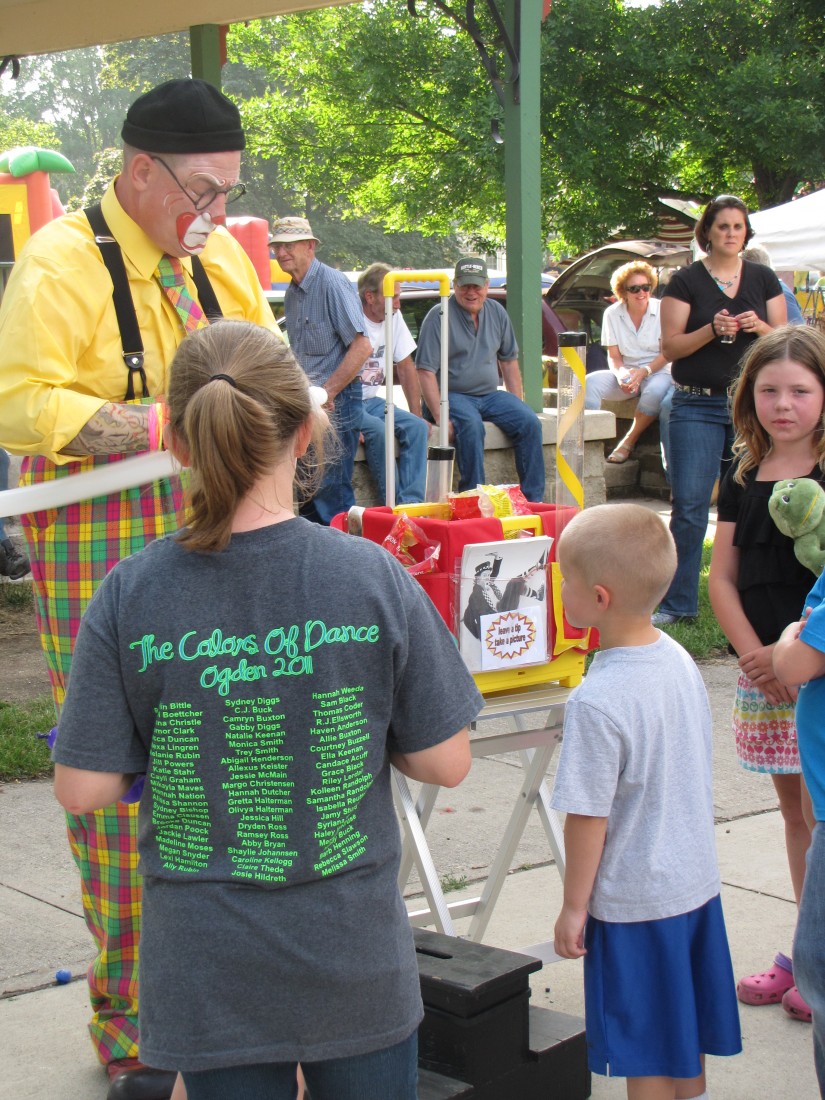 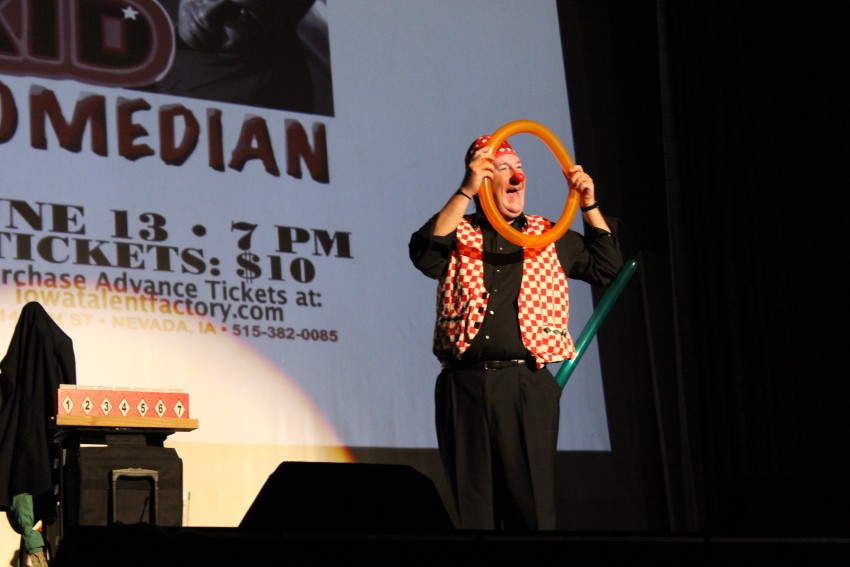 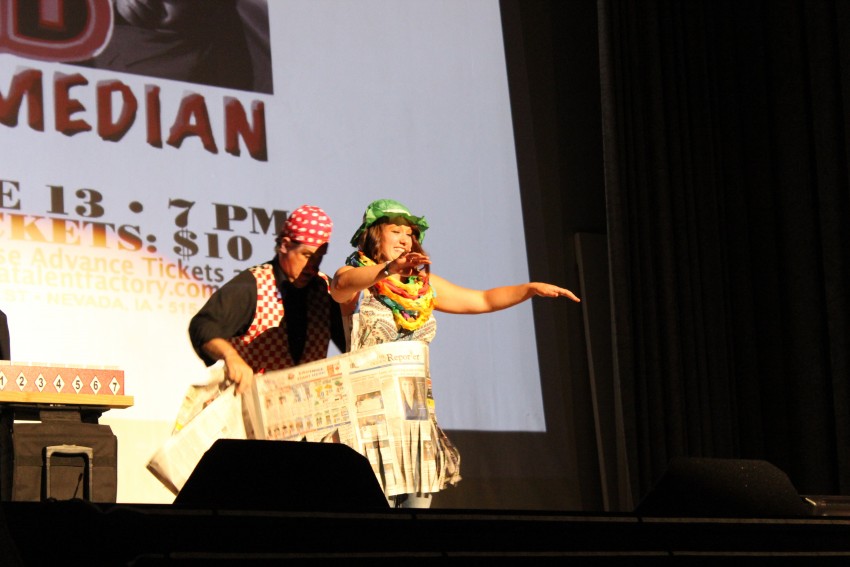 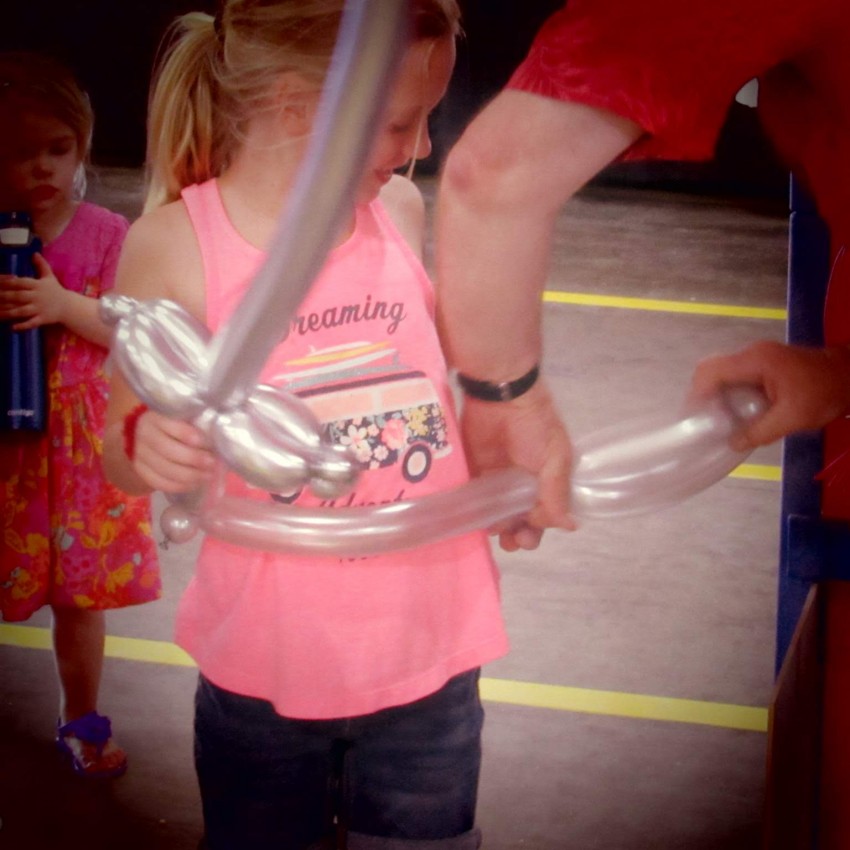 Toby Twist aka Toby KID Klauenberg is one of the masters of the art of funny, literally. Awarded the title Master Clown in 2009, Toby has traveled the world making people laugh and smile.

From arenas to living rooms, Toby can make smiles wherever he is. Toby has given giggles to Garth Brooks, the king of Norway, a prince of England and millions more.

Balloons have been part of Toby's repertoire since 1984! For more than 30 years Toby's humor has twisted just like his balloons do.

Toby was amazing. Showed up early to set up, was great with the kids. Got lots of compliments from our crowd. Would highly recommend!

What a great event to be part of. The Glidden FFA Fun Day is a classic Iowa celebration. The folks were awesome and easy to make smile. See you next year.

He did a great job!

What a great group of people I got to meet at your event. Smiles were everywhere and I'm glad I was able to add a few more. Call anytime!!

He arrived early and was a hoot - a big hit with all of the kids who attended our event. I would definitely hire him again.

Thanks for the kind review. It was a wonderful event. Great way to share so much with so many.

Toby Twist aka Toby KID Klauenberg offers a variety of skills, acts and entertainment!
Available shows include:
Balloon Twisting Art - Toby Twist puts smiles on faces and memories in the hearts with his inflation creations.
Comedy Concerts - A one man comedy show filled with jokes, giggles, laughs and lots of audience participation. This show is fit for the entire family.
Strolling entertainment - Toby takes the fun right to your guest. With balloons or magic or juggling or jokes (and often all) the fun is presented everywhere you need laughs.
Emcee - Toby has emceed some of the most prestigious evenings of splendor across the Midwest. He's emceed the largest dance marathon in America. KID has presided over and unprecedented six Clown Hall of Fame Induction Ceremonies. Toby co-hosted multiple events with Meadowlark Lemon, Roy "Cookie" Brown from WGN's Bozo Show and was the host and emcee on the stages at the Iowa State Fair for six years.
Comedy shorts - Let Toby fill the dull moments of any meeting, conference or seminar with five to ten minute comedy vignettes. These can be presented from stage, floor or at the end of a conference table.
A short list of the mastered skill of Toby;
Juggling, Magic, Comedy, Physical comedy, Pantomime, Audience participation, Balloon Twisting Art, Story Telling, Games, Improv and so much more!

Toby Twist aka Toby KID Klauenberg has more time bending balloons than most anyone you can find.
Toby started twisting in 1984. He was part of the team that introduced the art of ballooning to Europe in 1986. Toby's work has been show cased at the International Clown Hall of Fame, World Clown Association and the International Brotherhood of Carpenters.
Balloons are just one of the creative outlets for Toby. Toby earned the prestigious title of Master Clown in 2009. Recognition for his sense of humor and clean comedy spins by the Country Music Association has given Toby the chance to work with Garth Brooks, Alabama, Asleep at the Wheel, Patty Loveless and many other chart topping artist.
What would a guy like Toby do on his down time? Continue his community service as an elected member of his local school board, serve as a volunteer firefighter, coach a little league teams in both baseball and softball, advising member for a state, county and local politics and is a member of the REAP board.
Toby has been married to Jen for more than 27 years. They have 4 children all of who are honor students and awarded athletes.

Toby's career has spanned thirty years, 3 continents, 17 countries and 48 states. He's performed in just about every entertainment venue. That diverse and lengthy experiences has taught Toby it's not the lights or the sound or the setting that makes a show - it's simply making the audience have fun.

Toby was the perfect act for our clients. He made it look easy to perform for this serious group of accountants. Mark Grouth, Ernst & Young

Toby is an Eagle Scout and has learned to Be Prepared. So he brings bag of fun and his rural roots to the stage. The potential of comedy is exponential with KID’s audience play, straight monolog and insertion of 30 years of skill development. The crowd drives the show!

Toby’s show plays across the spectrum as showcased by his presentations from educational elementary school shows to multiple programs via the Iowa Center for Assisted Living (ICAL). He’s done comedy for football players and their families the night before the NCAA National Championship. KID’s performances have aided many ag base groups, netting his the FFA Distinguished Service Award. Performances in small churches to arenas, the streets of Covent Garden, London to the stage at the Iowa State Fair, county fairs (Burt Co Ne, 8/7/16) to comedy for worldwide corporations (Musco Lighting 2/20/16) Toby KID loves to make folks laugh.

Possible routines -
Three Hat Monte - Son vs. Dad in a challenge that is impossible for Dad to win, until the very end.
Plate Juggling - Young kid or very old person actually invited on the stage to learn and perform plate juggling
Mr. Wong – How I learned to juggle
The Great Escape – A race between two audience members inflating balloons and Toby KID escaping from chain handcuffs
Balloon of Death – Young audience member becomes the featured performer first learning the look and stance for a performer. Then the kid makes a balloon appear and finally the kid penetrates a magic wand into the balloon.
American Dynasty – A young lady flaunts her American spirit with costuming and sprouting a beard. Then she proceeds to magically make an American flag.
Signs of the Time – A hysterical look into the mind of a comedian with visual aids (Guaranteed to make every one especially the 9-13 year olds laugh.)
A Spooky Story – A retelling of a never-before told tale. The scary twists and turn will make memories as the entire audience tells the ending.
Questions without Answers – Ponderings that will generate a few ‘hmms’, ‘oh yeahs’, ‘never thought of that’ and laughter
Race to Boom – Enthusiastic members of the audience team up in a head to head competition against other audience members. The remaining audience’s cheers and shouts increase the excitement to the final big boom.

Toby's show has been compared to a Red Skelton variety show. That's a huge compliment to KID as Red was one of his heroes.
Toby grew up in central Iowa where Duane Elliott and Floppy were the kid's show stars. Early in his career Toby toured with Duane and Floppy and was a regular on their tape television show. Toby also appeared regulatory on The Magic Window, the longest running, locally produced children's television program in America.
Toby KID Klauenberg has performed with every living member of the International Clown Hall of Fame. Toby KID has shared the stage with Lou Jacobs, Mark Anthony, Frosty Little, Ray Cookie Brown, Bumpsy Anthony, Micheal Polakovs, Dick Monday, Barry Lubin and many many more of the world's greatest clowns.
Toby has worked with BB King, Garth Brooks, Alabama, Asleep at the Wheel, Patty Lovelace and many more #1 recording artists.
Toby KID has written for Ronald McDonald, Hector Pagan, Don Reese and countless other comedy greats.