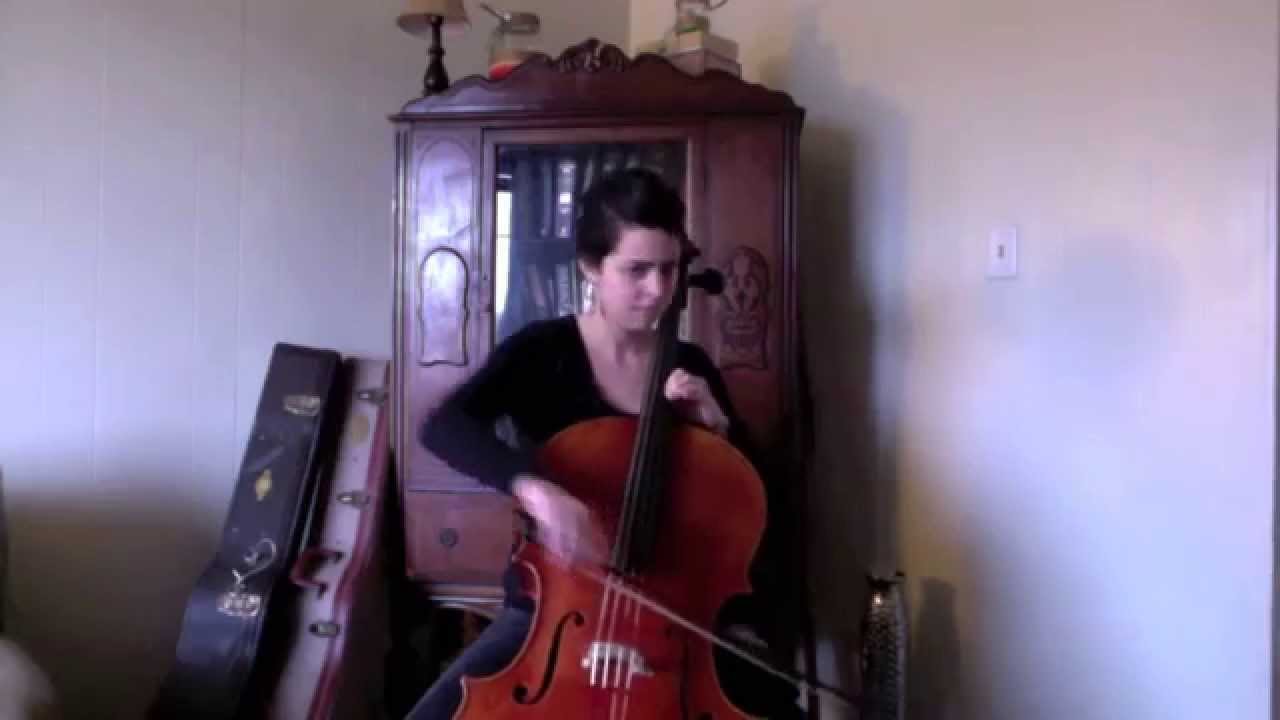 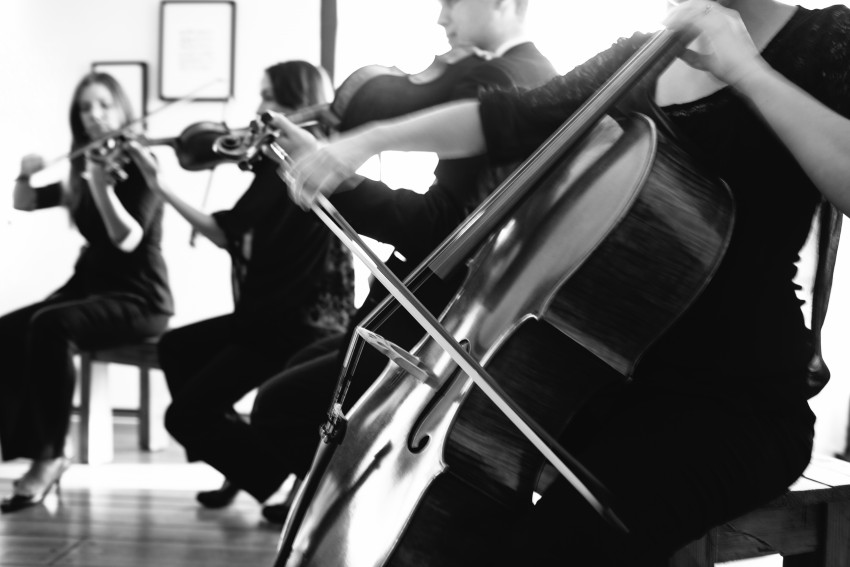 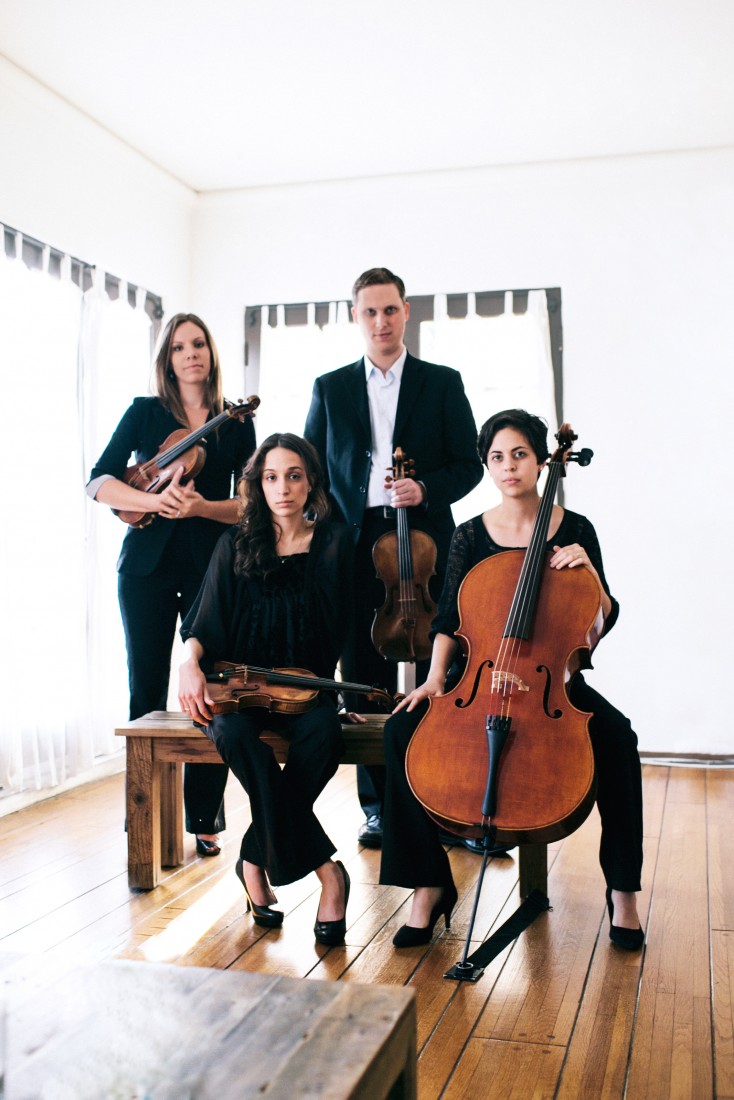 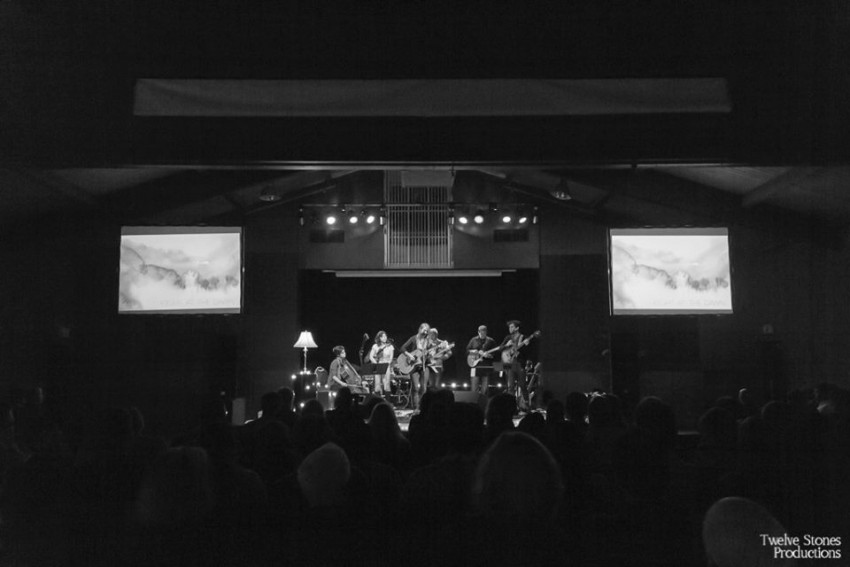 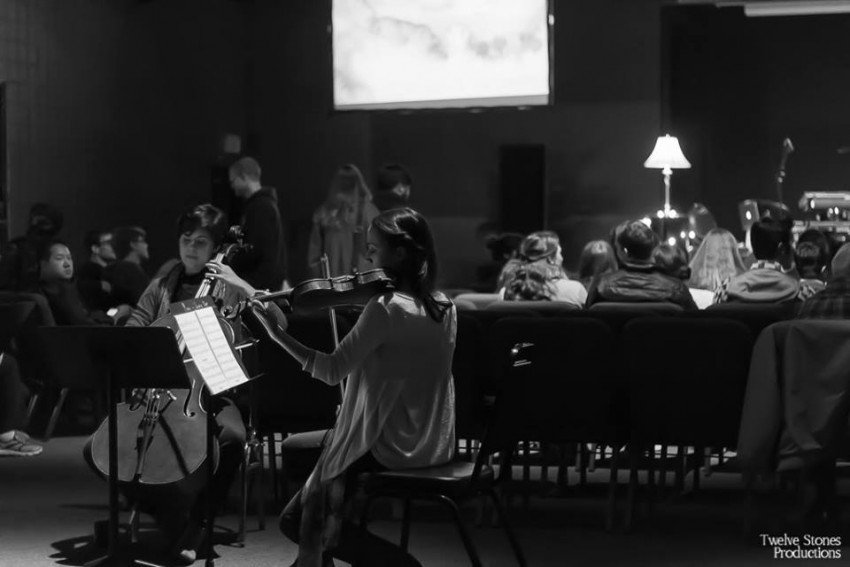 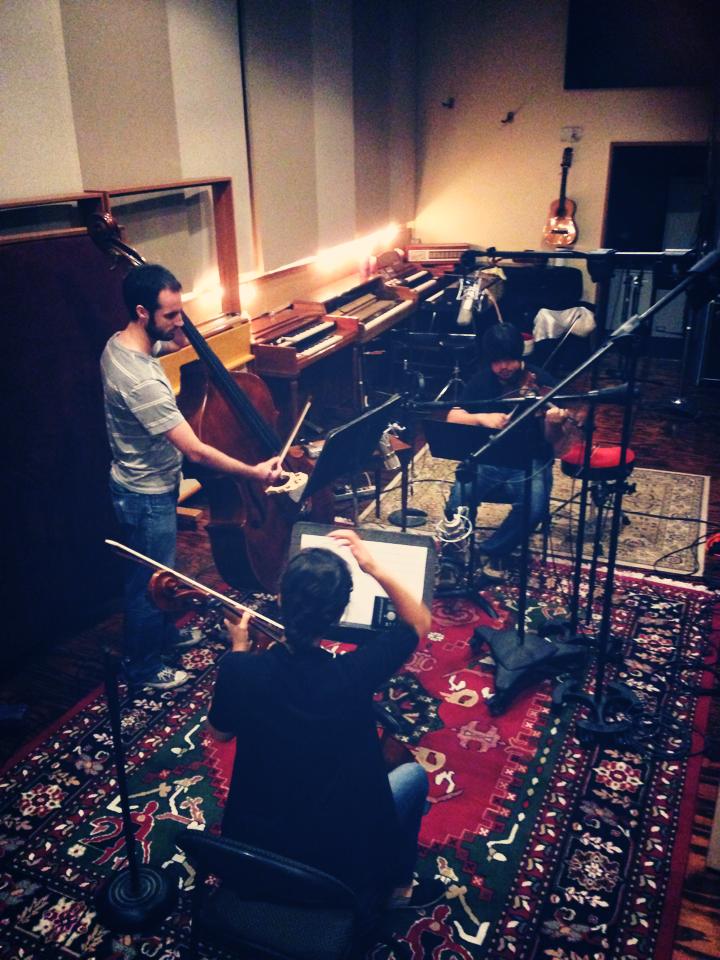 In the recording studio with "The Show Ponies" for their album, "We're Not Lost" in Los Angeles, CA. 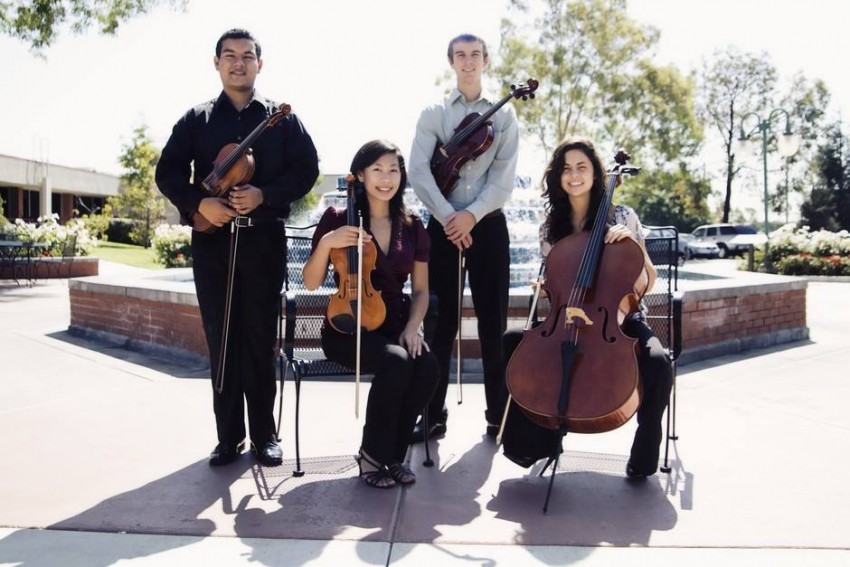 With her blend of artistry and expertise on the solo cello, Sarah McGrath brings a touch of elegance and class to every occasion. From masterworks of old to contemporary favorites, her music is ideal for both intimate gatherings and large-scale events.

Nothing quite compares to the deep, rich and glorious sounds of the cello - an extremely versatile instrument that offers an expansive variety of genres and sounds: sweet and soothing, swift and soaring, playful and upbeat.
McGrath delights in custom-tailoring her selections to the needs of her clients, and can curate a program unique to each venue and occasion.

The BEST musician we could have ever chosen. So kind. So professional. It was perfect.

Thank you so much, Sara! Your wedding day was glorious and it was an honor to be a part of it!

Sarah played music for my wedding ceremony and during our cocktail hour. While coordinating for our event, she was extremely professional and had great ideas about songs. She even arranged a song on solo cello for us for our recessional. Although we ended up not using it, I appreciated her desire to make our ceremony unique/our own and commitment to having our day be special.

I thought she did a wonderful job playing songs for our ceremony as well as during the cocktail hour. I appreciated her mix of contemporary pieces as well as classics. She was so sweet and I really enjoyed having her play for both of these parts of our wedding.

I would highly recommend hiring Sarah for a wedding or any event where music might be a welcome addition.

Thank you Stephanie! It was an absolute joy and honor to be a part of your incredibly beautiful and special day!

Sarah is an amazing muscian!

It was a great pleasure to have Sarah play for our Holiday luncheon. Her music added the perfect touch to our gathering, and I received many, many comments on how much the attendees enjoyed the music. We have this luncheon every year and I got compliments on this being the best one ever, and that was in part due to the entertainment.

Perfect Evening with the help of Sarah McGrath

Sarah provided exactly what we were hoping for, she delivered an evening of delightful music which basically created the festive atmosphere we were seeking. She graciously agreed to travel to Seattle for our Penthouse party. She is a consummate professional and plays a mean Cello. If they allowed 10 stars, I would gladly check them! - Manager Windermere Real Estate, Poulsbo

Sarah came and played during put First Friday Artwalk. Her music was enchanting and mesmerizing. It filled our 3600 sf store with magic. She has a sweet, kind and gentle spirit that shows through in the way she plays. We would highly recommend her. Thank you Sarah. Let's do this again, soon!

Sarah did a phenomenal job at our wedding! She already came with a list of ideas and her professional/personal touch. We are so grateful that Sarah was available for our wedding New Year's Eve weekend. I HIGHLY recommend Sarah for ANY of your events. She is talented and genuine.

THANK YOU SARAH MCGRATH FOR MAKING OUR WEDDING DAY SO SPECIAL and UNFORGETTABLE!

I hired Sarah and her husband to play live contemporary music for our wedding ceremony and they where amazing. My guest where all impressed with there music. It definitely added an extra touch to what was by far the most intimate and romantic setting I could have ever imagined. They where very flexible with there time despite how late I was. For the price, the quality and the professionalism was beyond my expectations. Thank you both for being part of such a special day for us!

Sarah McGrath is an incredible performer. Each of our guests commented how beautiful her playing was and she planned her mix to fit perfectly with the ages and styles of our guests. It could not have been more perfect. Sarah is elegant and presents beautifully. We will have her return for more of our events. Thank you for helping me find her.

Fantastic to work with!

Sarah played during our wedding ceremony. She was so incredibly kind, considerate, professional, and pleasant to work with. Most importantly, though, she played beautifully. Working with Sarah was the least stressful part of the wedding planning. Very surprisingly, I found her to be incredibly reasonably priced. I highly recommend Sarah!

Sarah is talented, graceful and absolutely lovely to work with. We loved having her play at our ceremony. Her music and elegant presence was the metaphorical icing on the cake. An absolute dream. We will hire her again for any excuse we can come up with in the future.

Our new president wanted a cellist to play background music for his inauguration reception. Sarah and her music certainly added class to this very successful event. Sarah was a pleasure to work with.

I was only able to pay for Sarah to perform for my residents for 30 minutes at our Care Center on Bainbridge Island. However, in those 30 minutes, my residents lit up, smiling, making requests for her to play and laughing while interacting with her in between songs. Sarah interacted so well with the elderly and her demeanor was so gentle! And, of course, her playing was so beautiful! I highly reccommend Sarah to play at any event you are planning... weddings, birthdays, coporate parties, or just because!

If you are searching for the simplicity and beauty of the violoncello alone, Sarah McGrath Music specializes in musical arrangements that have been carefully selected and tailored for any event and every occasion.

Her repertoire ranges from baroque, classical, jazz, and folk to Irish Celtic, contemporary pop, and the classics (songs from every era).

You can expect professionalism in all areas: her interactions and timely communication, her assistance (if needed) in helping you choose the music to best fit your occasion, her preparedness and promptness, and an exceptional performance that will be sure to please your audience and create an atmosphere of elegance.

Raised in Susanville, California, cellist Sarah McGrath received much of her formative training in symphonies and chamber groups in Northern California and Nevada. Following early studies with Emily Uhlman, assistant principal of the Reno Philharmonic, she relocated to Biola University, where received her B.A. in Music and completed studies in cello with Marlin Owen and chamber music with Elizabeth Larson.

McGrath has been the participant of several chamber music festivals, including the Sequoia Chamber Music Workshop at Humboldt State University, California, and Credo Chamber Music at the Oberlin College Conservatory in Ohio. While at Oberlin, she worked closely with Alan Harrell of the Cleveland Orchestra and Stephen Clapp, the late dean emeritus of the Juilliard School. McGrath's most recent performances have been with The Pacific Coast Quartet, a premiere string quartet based in Orange County, California.

A frequent solo and chamber music recitalist, with repertoire ranging from baroque and classical to folk, McGrath also enjoys performing and recording with contemporary bands. In addition to her work as a professional musician and teacher, she devotes special time to music outreach, working with care and rehabilitation centers, hospitals and convalescent homes.

To allow Sarah McGrath to perform her best, a well-lit space should be designated that will accommodate a chair and music stand, and must allow sufficient room for bowing. An armless chair is to be provided. Given advance notice, Sarah McGrath will provide her own chair at an additional fee if the requisite seating is unavailable. Event coordinators should be aware that Sarah McGrath performs on the cello without the use of amplification. The volume of an unamplified cello may be reduced significantly when out-of-doors. Depending on the venue characteristics, amplification may be required. Sarah McGrath bears no responsibility for sound reinforcement.

Due to the delicate nature and expense of her stringed instrument, Sarah McGrath reserves the right to decline performances that may put her instrument at the risk of damage. In the case of outdoor events, a covered performance space must be designated that provides full protection from direct sun exposure and adverse elements (rain, wind, etc).

For performances in excess of one hour, Sarah McGrath shall be granted an eight-minute intermission for each hour.

Solo Cello: Bach Cello Suite No.1 by J.S. Bach, Serenade by F. Schubert, , Minuet in G by L. van Beethoven, Traumerei by Schumann, Andante, Theme from the 5th Symphony by P. Tschaikowsky, Simple Aveu by Francis Thome, On Wings of a Song by Mendelssohn, "Edelweiss" from The Sound of Music, Danny Boy, Traditional Irish, "Over the Rainbow" from Wizard of Oz, The Swan, Le Cygne by Saint-Saens, Canon in D by Pachelbel, "Moon River" from Breakfast at Tiffany's, "If I Loved You" from Carousel, "Great Pretender", Buck Ram, "That's Amore", from The Caddy, Jesu, Joy of Man's Desire by Bach, Aria from "Xerxes" by Handel, Vocalise by Rachmaninoff, "My Funny Valentine" by Richard Rodgers, "Clocks" by Coldplay, "At Last" (Etta James) by Henry Warren.

Krista M. said “Exactly what we were looking for. Spencer was perfect. Would hire again.” 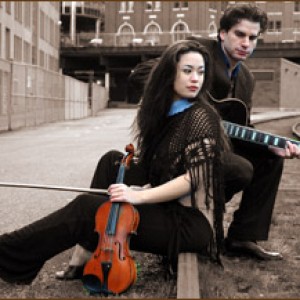 Melanie T. said “Everyone enjoyed your music - thank you again !” 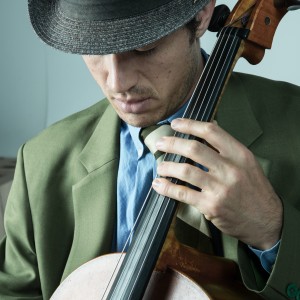 Carol R. said “I wanted to play a joke on my guests at my birthday luncheon so I hired Joey to pretend to be a waiter. Except this waiter's accent kept changing from…”

Josey B. said “Anna brought such skill, professionalism and flair to her work. Her presentation was immaculate and she played beautifully, sensitively and passionately.…”