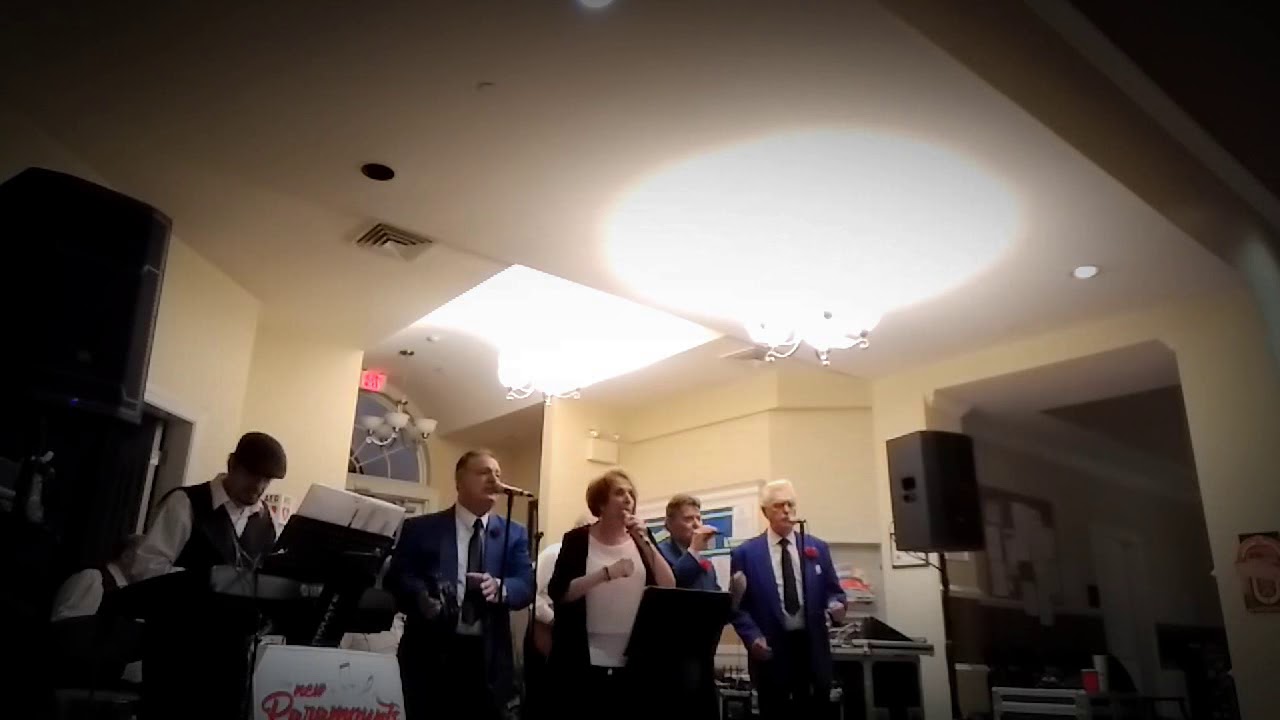 "The New Paramounts" is an authentic, experienced, professional oldies group delighting its audiences with great musical selections from the 1950's through the 1980's. Currently we are seven members: three front line, dynamic lead and harmonic vocalists backed by a seasoned, professional, energetic live band consisting of keyboard, guitar, bass guitar and drums. The New Paramounts are committed to delivering music that will keep you dancing while bringing back wonderful memories.

Thank you for coming to entertain our campground guests! We had a lovely evening!

OLDIES 50’S & 60’S ROCK & ROLL DOO-WOP BAND BIO Milton
Delgado Milton is the original lead singer
of “The Paramounts” which he formed in 1958; he began
singing Doo-wop when he was just 12 years old on the street
corners, candy stores, rest rooms and hallways in The Bronx.
In 1959, “The Paramounts” were signed to Carlton Records by
virtue of an audition which their singer friend, Ralph DeMarco
arranged for them. Ralph’s Manager, Jim Gribble was looking
for more groups to represent. They were given the name of
“The Paramounts” and recorded two songs entitled: “Trying”
& “Girlfriend.” Two other songs were recorded: “Christopher
Columbus” & “I Know You’ll Be My Love” (now collector’s items)
but unfortunately were never released. Ralph asked “The
Paramounts” to be his back-up singers for a song he was about
to record entitled: “Old Shep”-Ralph receive partial notoriety
and was invited to appear on: American Bandstand. “Old
Shep” was recorded on a subsidiary Carlton Label, Guaranteed
Records. “Old Shep” is also a Collector’s Item. Jim Grabble
also managed: Anita Bryant, “The Passions,” “The Mystics,”
“The Fiestas,” and a few other groups and artists who later
gained: “Fame & Fortune.” Unfortunately,
“The Paramounts” members went their separate ways: some
moved out of state, married or went in to the service. Although
having gone through many group members and bands, over
the years, Milton persevered; when he moved to Pennsylvania,
he put an ad in the local newspaper to start a Doo-wop Group;
he was fortunate enough to find Dick Plotkin, another Doo-wop
Singer who was from the same era as he was; Dick helped find
other singers; eventually two other guys were found and the
group was reformed. “The Paramounts” were back in business
singin’ the fabulous oldies but goodies Doo-wop harmonies
from 50s-n-60s! “The Paramounts” mostly perform throughout
the North Eastern Pennsylvania Region with occasional jobs in
New York and New Jersey; they’re still going strong and sound
better than ever!
“THE NEW PARAMOUNTS” SINGERS ARE:
MILTON DELGADO, PAULETTE COSTA, RICHARD CHAPMAN and DICK PLOTKIN.
PAULETTE COSTA, a native of Scranton,
started singing at a very young age with her most
talented (Singer, Composer, Arranger, Pianist)
brother, Tony Costa and her sister Rose forming,
“The Costas Trio.” In high school, Paulette formed
another group called “The Gales;” they received
some prominence throughout the East Coast
performing cover songs including an original song composed
by Paulette herself, entitled “Tommy” which was recorded by
fellow musician and friend, Dick Plotkin, President of Debra
records. During the 70’s and 80’s, Paulette also excelled as a
professional bowler. Paulette continued her singing career and
joined an oldies group called “The Magics.” During her career
performing with Rock & Roll groups, Paulette established
herself as a “Solo Artist” performing hit standards from the
American Song Book. When the Magic split in 2016 another
Oldies Group in the area called “The Paramounts” heard about
the Magics breaking up; having lost one of their singers, they
asked Paulette to join them. Fortunately, she agreed and has
been quite an asset to our group to date.
RICHARD CHAPMAN, the newest member of
“The New Paramounts” is a former Marine Vet, from
Brooklyn and a New York City Police retiree.
Richard is a versatile
vintage Doo-wop singer from the early 50s and
60s as well.
DICK PLOTKIN, is the President of Debra
Records Company, Scranton, Pa. which he
founded in 1958; he is a musician, producer,
arranger, and composer as well as a fine Doo-wop
Singer. Dick produced several artists and
groups which he formed and recorded on his
label (Irman Music Publishing/BMI) “The Gales”
“The Blendells,” “The Precisions” “The Magics” and of course:
“The Paramounts” CD “Then & Now".

THE BAND MEMBERS OF “THE NEW PARAMOUNTS” ARE:

We need an area large enough to accommodate up to 9 people. The breakdown consists of 4 singers with mic stands and mics, 4 musicians and 1 sound technician. The musicians equipment consists of keyboard/s with stand and amp; guitar with amp; bass guitar with amp and acoustic drum set requiring ample area to set up and perform. Also, if needed, we provide our own pa system operated by a sound technician. Available, upon request, we can provide special colored lighting.

There are many more songs than this in our repertoire. Please ask for favorite artists or songs. We are constantly learning new material.