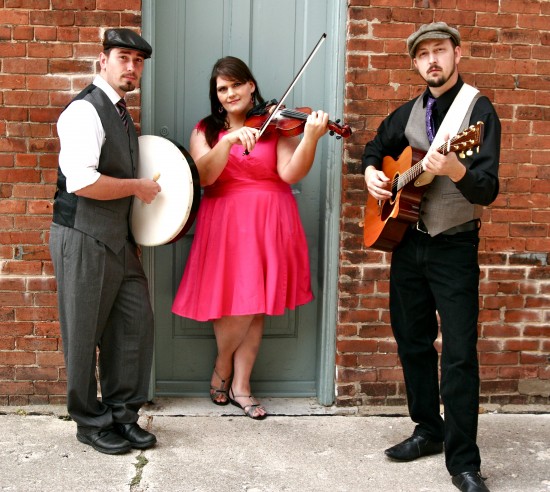 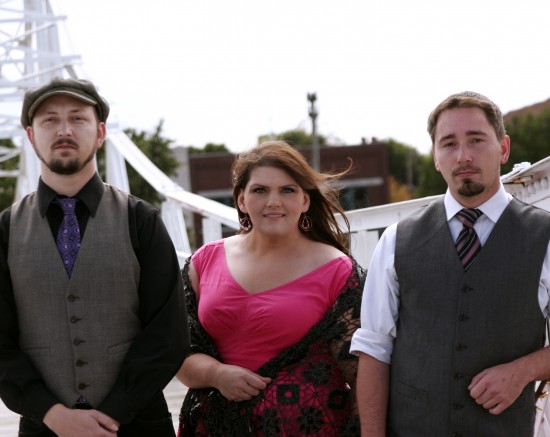 Rowan's Crossing is an accomplished musical group hailing from the Missouri Ozarks. This talented group includes Jennifer Wilson (fiddle/vocals), Robert Adkison (guitar/mandolin/bodhran), Lonnie Ezell (guitar/vocals/bodhran/whistles), and Aisling Wilson (bass), who combine their considerable skills to bring you Irish pub tunes and instrumentals, contemporary folk, and American old-time favorites laced with Ozarks charm.
Whether raising a ruckus at your local pub, playing troubadours at your nearest Renaissance Faire, bringing vibrance to the local farmer's market, playing a concert in your friend's living room, or wherever the four winds take us, we're going to have fun and so will you!

Be the first to review Rowan's Crossing

We play a wide variety of music, and can pull from our extensive repertoire to fit your needs. Whether you would like beautiful traditional Celtic music as an elegant backround to your dinner event, rousing Irish pub songs to get the crowd going, traditional Americana to add heart and vibrance to an event or festival, or contemporary folk favorites to warm your spirit - or a mix of all! - we can tailor our set to fit your needs.

Rowan's Crossing is an acoustic musical trio hailing from the Missouri Ozarks. This talented group includes Ozarks natives Jennifer Wilson, Lonnie Ezell, Robert Adkison, and Aisling Wilson, who came together to combine their mutual singing, songwriting, and musical abilities and mutual love of Irish culture and music. After years of honing their skills in many and varied musical settings, they are happy to be pursuing what they love: preserving Irish and Ozarks traditional music while having lots of fun - and bringing that life and happiness to audiences throughout the Ozark Mountain area.

Lonnie is an accomplished guitar player who also plays bodhran, whistles, and mandolin. He brings diverse musical influences and has a vast range of musical experience (even having performed for several years with a band of pirates!). He has taken the time to become proficient in many different genres with an assortment of instruments over a twenty-year time span and brings his knowledge, extraordinary vocal range, and performing talent to the stage to give Rowan's Crossing a unique, progressive sound with traditional nuances.

Jennifer has been playing violin/fiddle for over twenty years and mandolin for ten years. She began by studying traditional Ozarks fiddle style, and has continued with classical training and Irish fiddle style in the ensuing years. Her vast repertoire contains eastern Eurpoean, old-time, and bluegrass tunes with an emphasis in Irish fiddle tunes and songs. She is also a trained vocalist whose warm alto brings life to the Irish/Celtic songs Rowan's Crossing loves to perform.

A doumbek player for over five years for Red Moon Studios of Springfield, Missouri, Robert’s musical accomplishments also include bodhran, kit drums, oud, piano, guitar, violin, mandolin, and everything else with melodic potential! His years of involvement with the belly dance community have infused his rhythms with a distinct and versatile sound, which he brings to Rowan's Crossing as an outstanding percussionist and mandolin player.

Having grown up with the musical influence of her mother and father (the founding members of RC), and many friends, Aisling has been surrounded by Irish and American folk music throughout her entire life. She joined Rowan's Crossing in 2019, contributing her accomplished bass rhythms to fill out the sound of the band. After hearing her play, we agreed that she was our "missing piece!"

Our lineup ebbs and flows with talented friends sometimes adding to our on-stage fun. We can also put on a great show as a trio - so if you're looking for as few as three or as many as six or seven - check us out!

Rowan's Crossing is (typically) four performers who love what they do and have lots of fun doing it - and it shows! The heart, drive, and energy they bring to the stage invigorates audiences and ensures a performance they'll never forget.

Many and varied traditional Irish reels and jigs, and: