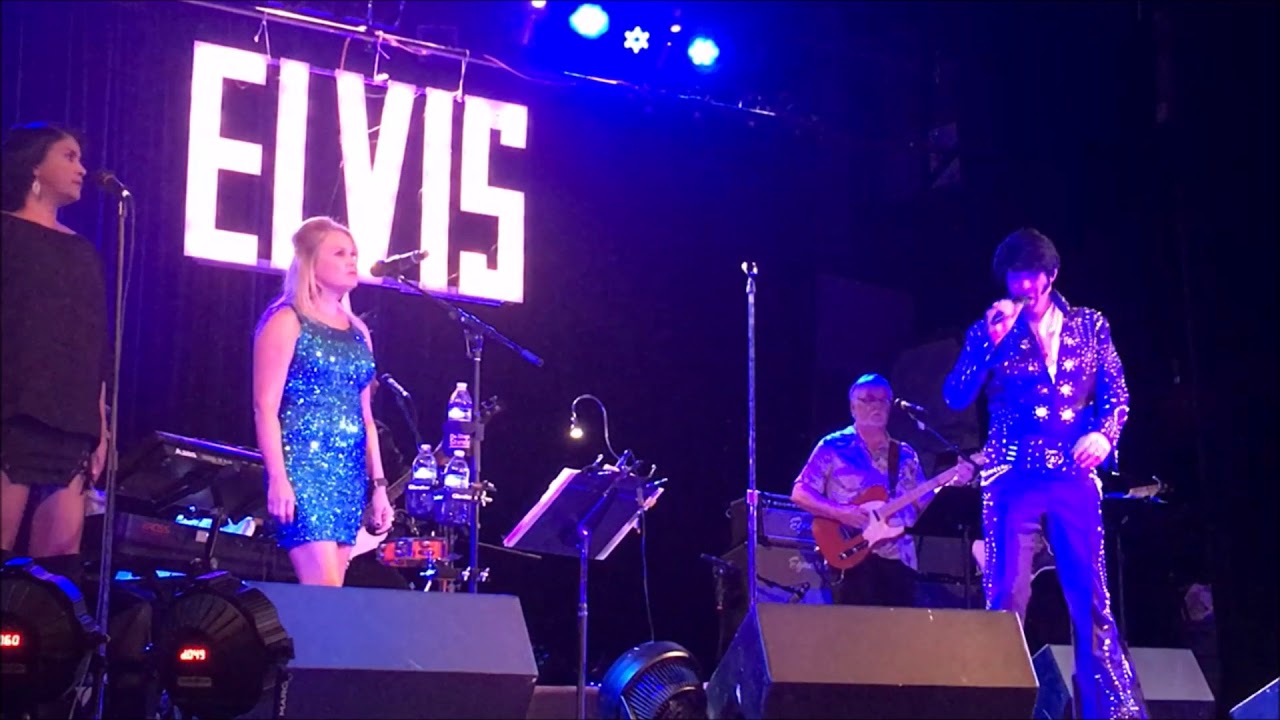 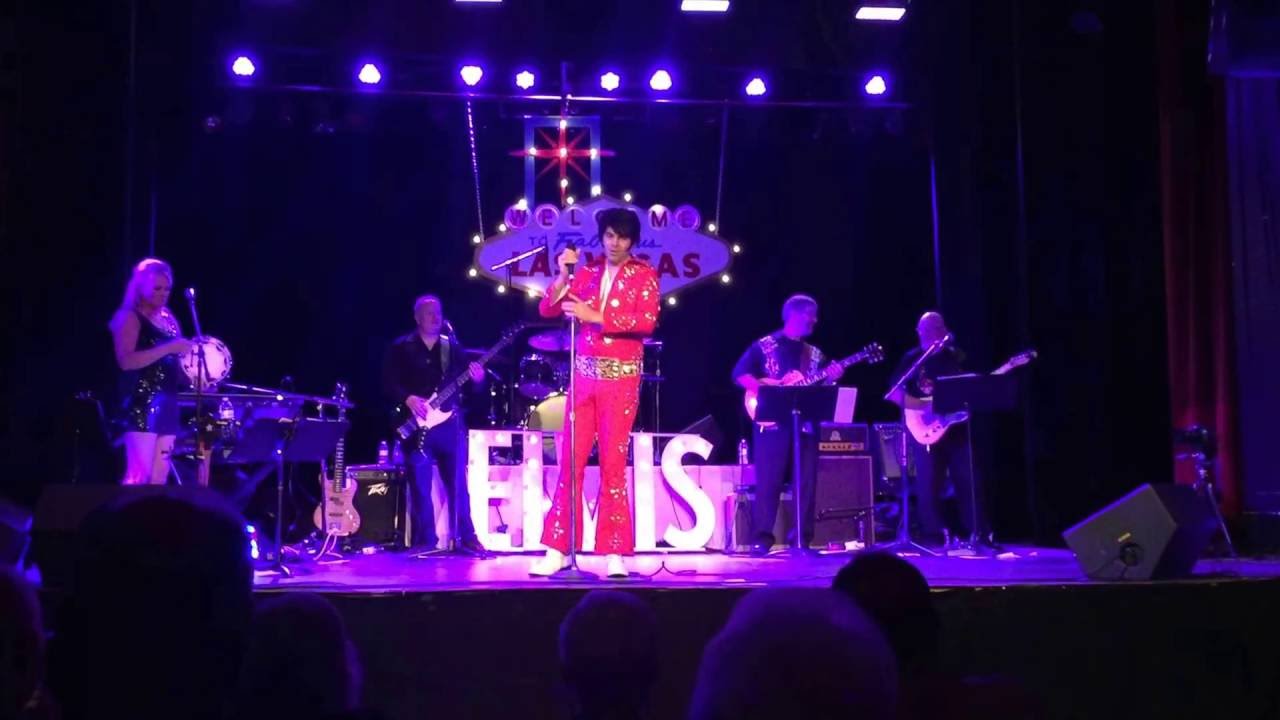 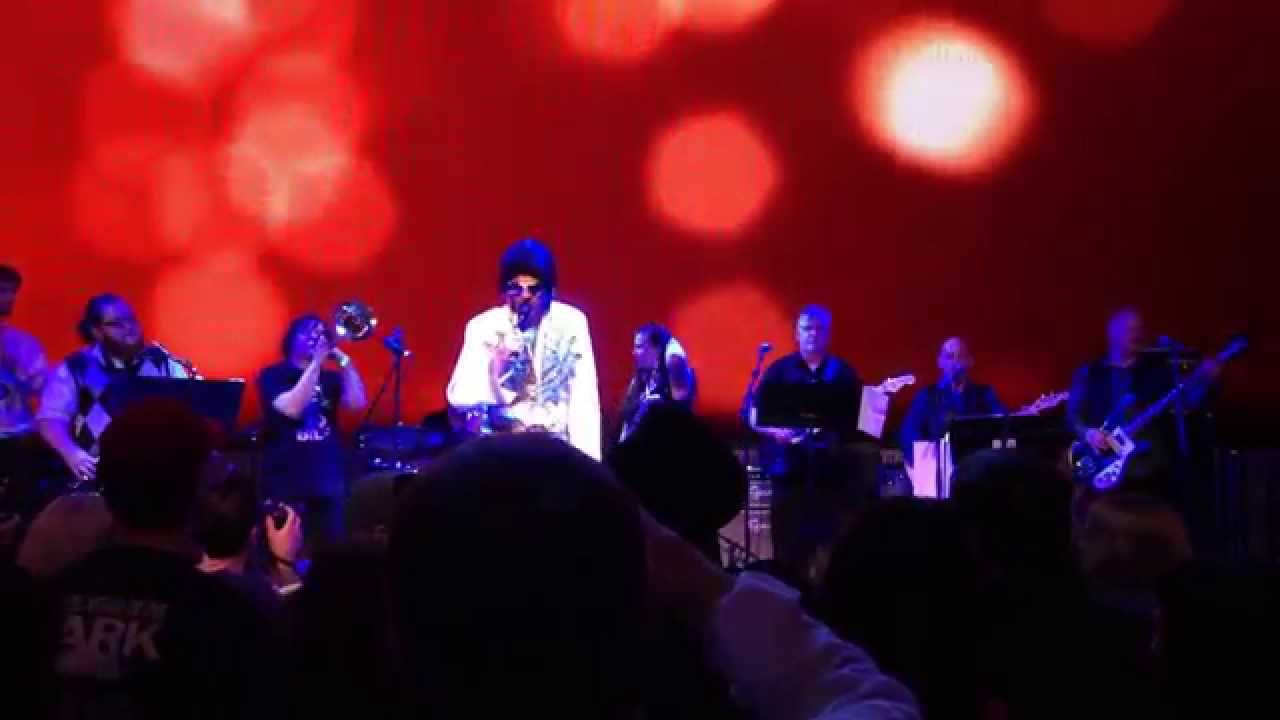 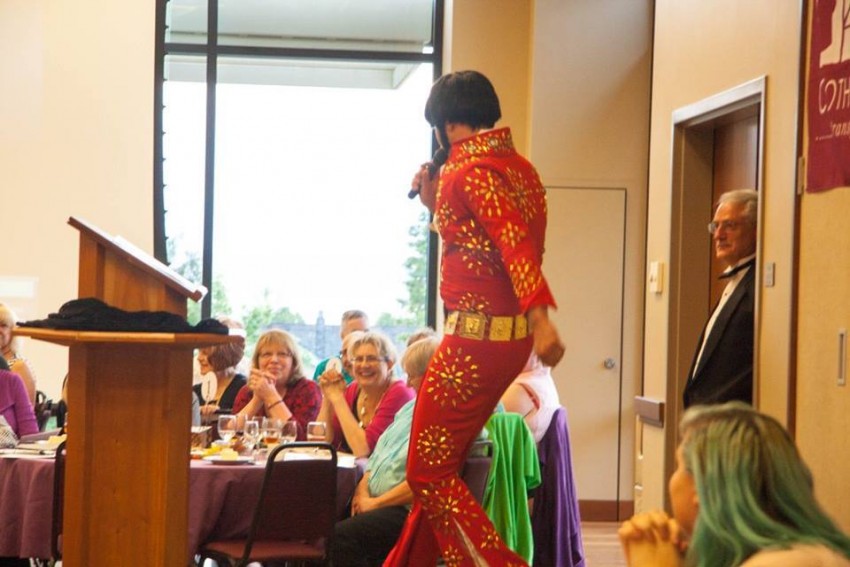 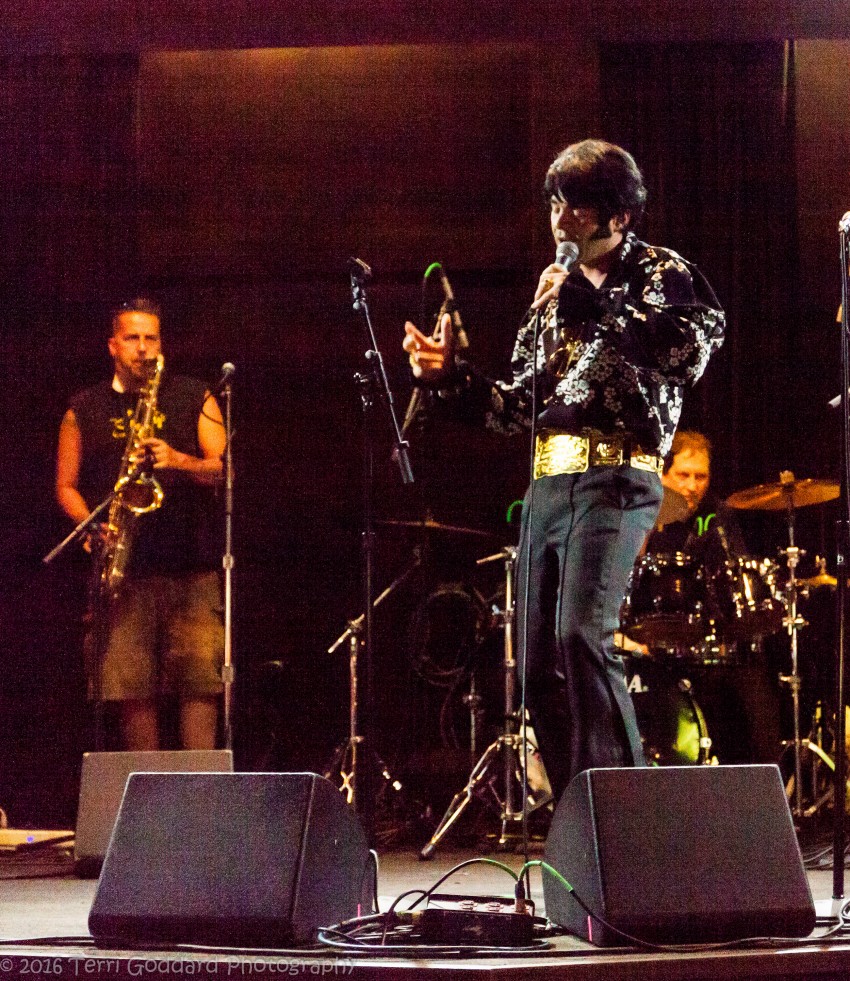 Rehearsals at the Crocodile 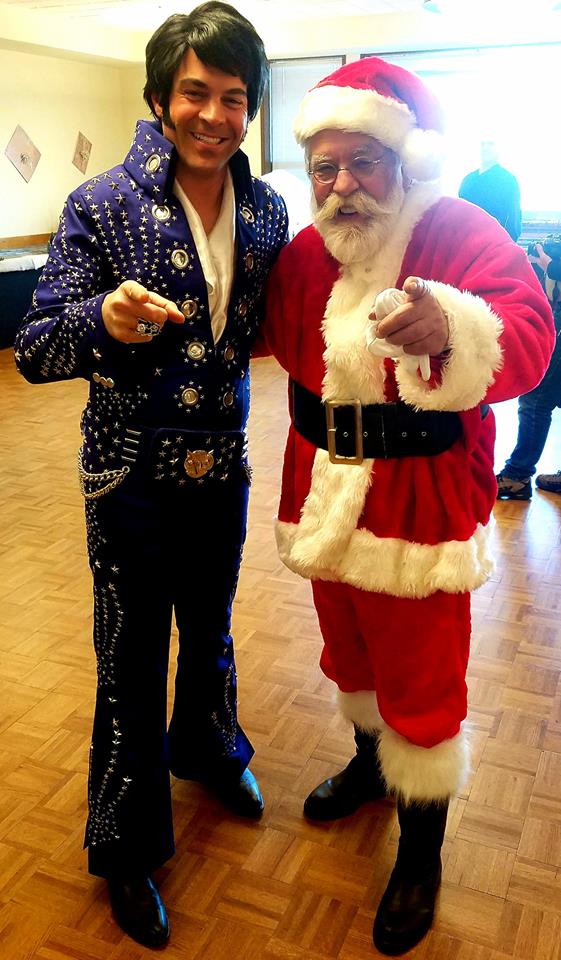 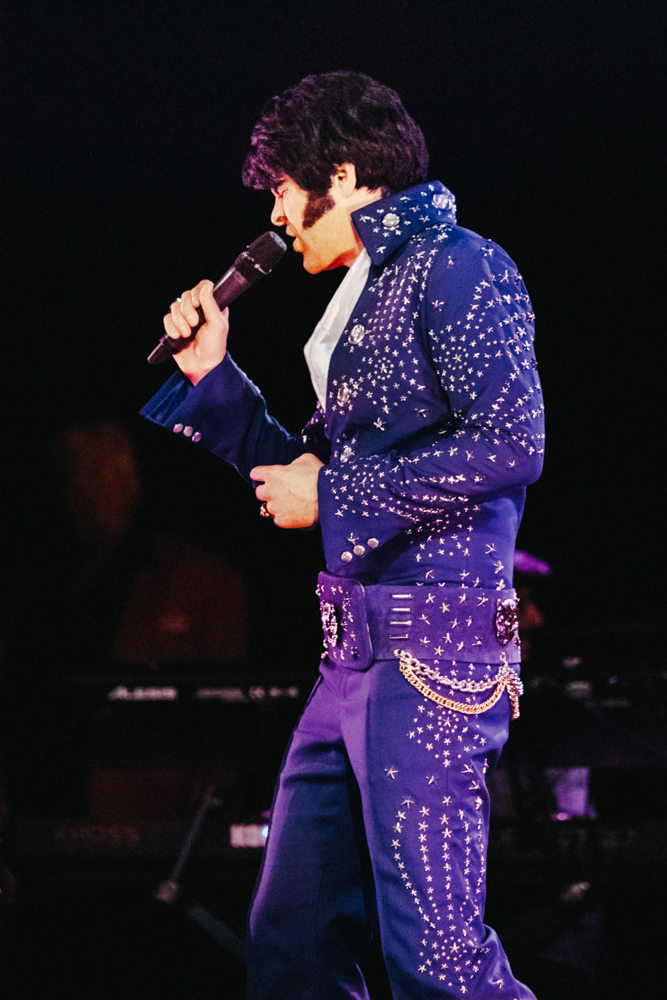 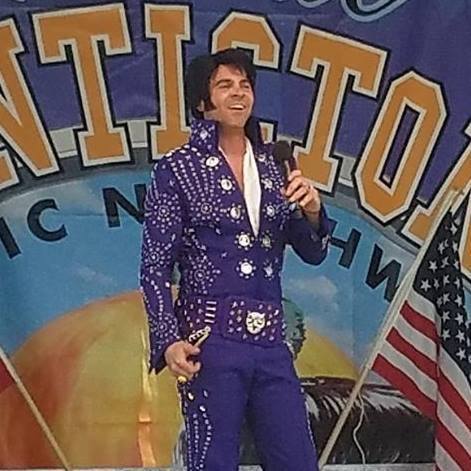 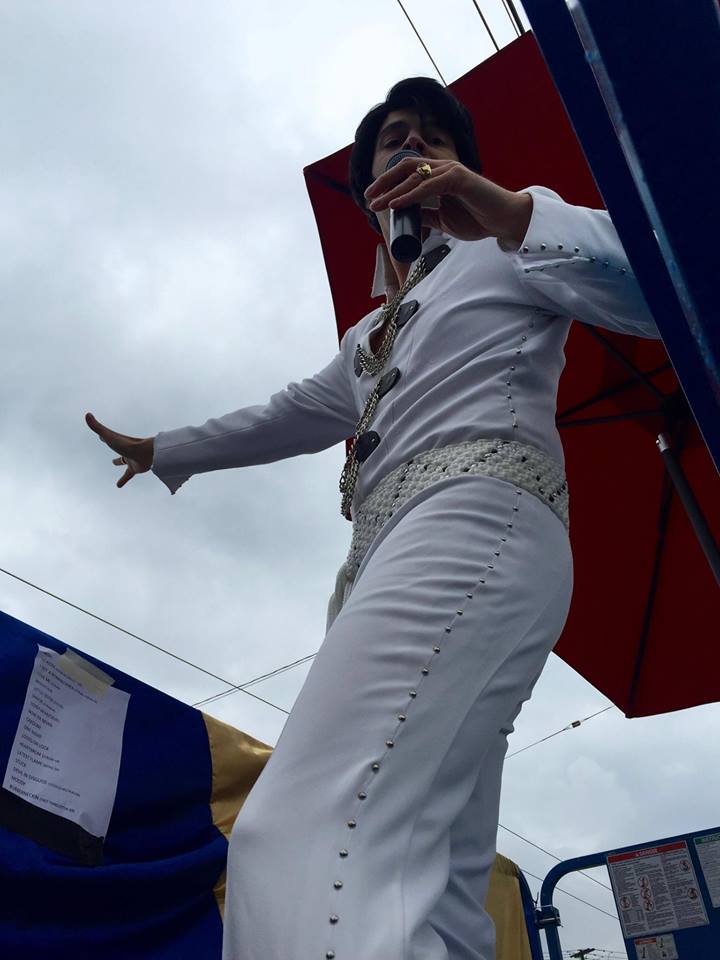 Award-winning Elvis Tribute Artist Robbie Dee is one of the top Elvis Presley Impersonators in the Seattle Area. Sharing Elvis Presley's timeless music with others is truly a dream come true for Robbie Dee. Now you can hire Elvis when you book Robbie Dee to play your event.

Robbie Dee is available to perform as a solo artist, with acoustic backing, or with full, professional backing band. He is able to tailor the show to fit what is appropriate for your venue, audience, and budget.

Robbie did a great job.

Elvis for the 4th was a WIN!

So much fun! Sang and danced at our 4 th of July BBQ took requests and selfies with my guests! Would definitely hire again it’s all my friends and neighbors could talk about for weeks lol

Thank you Amanda! You provided an amazing venue and stage. It was a great 4th of July party.

Robbie will be the highlight of your event!

I invited Robbie to join as a surprise guest for a birthday party. He performed a 30 minute show. The birthday girl was in complete shock when Robbie arrived. Elvis is her all-time favorite artist. Robbie sang the hits and took requests from the guests. He also stayed for a lot of photos at the end - everyone wanted a photo with him!

Robbie was really easy to coordinate with for the event. He showed up right on time. He engaged with the whole audience. I’ll definitely book him again for parties in the future.

Thank you very much, Jennifer!! It was a blast to be part of your party.

It's rare to find someone who has singing talent, looks the part, is professional, and has such great moves! Thank you Robbie for helping mom to relive some of her brightest memories as an Elvis fan and make new ones on her 80th Birthday!!

Thank you Kerrylee, it was a pleasure to sing for your mom on her special day!

Robbie was outstanding. He was very dedicated to masking sure to hit every song we requested and performed perfectly. I’ll absolutely use him again at parties in the future.

Thank you very much Trent! It was an honor being part of this special day.

Robbie was a wonderful surprise addition to a 50th birthday celebration. Everyone thoroughly enjoyed his company, songs and entertainment. He was professional, communicative and punctual which made planning and coordinating party details with him very easy. We highly recommend his services and will definitely be using him again for any future Elvis Impersonator needs!

Thank you Kira! It was a real pleasure to be part of the celebration!

Robbie "Elvis" did a great job for our open house at Mill Creek Retirement Community! He was really interactive with the residents and families that attended the event. This is the 3rd time he has visited our facility and it won't be the last. Great Job!

Thank you Travis! I had a great time visiting Mill Creek Retirement and performing for residents and guests in attendance.

On time sounded good, very friendly my mom had a great time!

We hired Robbie for my mom's 80th B Day party which was a 50's themed party. I grew up listening to my mom playing Elvis songs and watching Elvis movies. I enjoyed watching her dance to Elvis' music and loved watching her face light up while listening to his music. My mom has had some health challenges that have limited her ability to enjoy a quality life; visual impairment due to macular degeneration and rheumatoid arthritis that limits her mobility. Robbie's performance filled my mom's heart and soul with joy and even though she couldn't get up and dance, she boogied in her chair. There were several songs that brought tears to my mom's eyes while she was reminiscing about her family that has passed and my father who has also passed. Robbie was also funny, personable, and relatable. What a treasure and a blessing Robbie was for my mom and our entire family and friends. My mom said "I don't think my feet have touched the ground yet, I'm still in Heaven". Thank you and God Bless!

Thank you so much for the kind review! It was an absolute pleasure being able to celebrate your mother's birthday with your family!

Exactly what you'd hope for!

Robbie did our church's fundraiser this year. There was wonderful communication in setting everything up, and the day of he was there exactly as we'd hope him to be, great communication, and great stage presence. Would highly recommend his services. I contacted about 4 different Elvis tribute artists and Robbie was the only one who responded to me! If that doesn't speak to his communication, I don't know what does! The audience was a mixed bag of Elvis and non-Elvis fans, and one of the best endorsements came from one of the non-fans who said "I've never really been a fan of Elvis's music, but the more I listened to Robbie, the more I found myself saying 'Well, maybe I actually AM a fan of Elvis!'" We chose just Robbie alone without the band, but at the end of the night, we didn't feel disappointed at all! Lots of fun!

Thank you Adam - I had a great time singing at your event! Hope to come back again sometime.

Great communication in advance and arrived promptly on time for our private party. Elvis made the surprise party a big hit! Great voice and moves. Highly recommend.

Thank you Beth! Really enjoyed being a part of the big celebration!

I hired Robbie for a private performance for my mom who is bed ridden and on hospice at her home we kept it small with a few family members didn’t want to over whelm her. Well Robbie arrived on time and was very professional and friendly, he made us feel as if he was one of us. My mom was so happy and was even trying to dance in bed there were a few times Robbie almost brought happy tears to my eyes making mom so happy. This was the first time in months that we saw so much joy in her heart and sparkle in her eyes. This left us feeling a outstanding heartfelt peace that this was the most remarkable memory we will have together. I highly recommend Robbie Elvis impersonator to anyone If you love Elvis Robbie is the one to hire. Trust me you won’t be disappointed. In my experience Robbie is more of a 10 star. Thank you Robbie for making a difference in our lives

Thank you very much, Debbie! It was a real pleasure visiting your mother and sharing some wonderful songs with her and your family.

Elvis was a hit!

Robbie Dee rocked our senior community as the one and only King, Elvis Presley, for our recent Vegas party. He has a wonderful voice and his acting, dancing and gyrating were spot-on with Elvis. The ladies were swooning, especially when he tossed teddy bars and scarves. He was very organized and easy to work with. He arrived early and stayed late to mingle. A class act and a lot of fun! Our residents will have fond memories of his show. Thank you!

Expect to have a lot of fun! Robbie Dee will entertain and delight your guests with his amazing vocal skills and charming personality. Robbie adds extra touches to make guests feel extra special during his performance.

Prior to the event, Robbie will work with you on the details. This includes incorporating any song requests, special mentions, or touches that will make the event extra special. Robbie also will coordinate mingling/photo time before or after the performance.

Communication is key, and Robbie prides himself in being prepared and is quick to respond to any questions leading up to the event.

In spite of his deep love of Elvis and his music, it wasn't until the age of 27 that Robbie took the stage for the first time. After a great deal of arm twisting, Robbie sang “Viva Las Vegas” during a cruise ship karaoke night. The audience went wild and Robbie was hooked on the excitement of singing for a live audience.

In 2013, he was invited to a bigger stage to play with a live band at EMP/MoPop. Robbie competed in the Seattle Elvis Invitationals – Seattle's search for the best Elvis Tribute Artist. Playing to a packed house along with 20+ other Elvis Tribute Artists further encouraged Robbie's journey. In 2015, Robbie returned to the Seattle Elvis Invitationals and won the event – bringing down the house with his stunning rendition of the classic “Bridge Over Troubled Water.”

Ever since then, he's been performing at festivals, corporate events, private parties, and other venues throughout the Northwest. Robbie is known for his powerful vocal renditions of Elvis' hits and his charming smile. His favorite era of Elvis songs is the 1970's, but he also enjoys and performs songs from Elvis' entire career, including his early years (1950s), movie years (1960s), and Comeback Special (1968).

We can work with the unique details of your venue to create a memorable experience for your guests.

The only requirement is a space to sing and a power outlet.

We can provide microphones, speakers, and other sound equipment, or use the house setup if available.