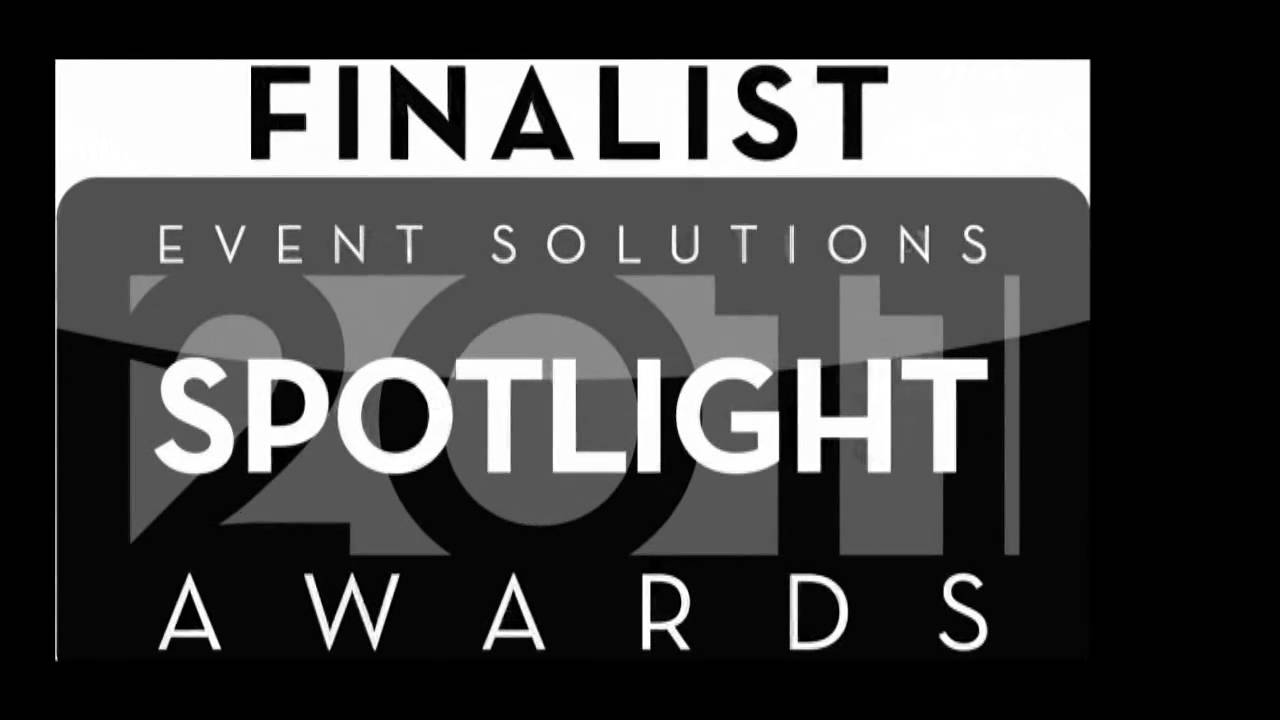 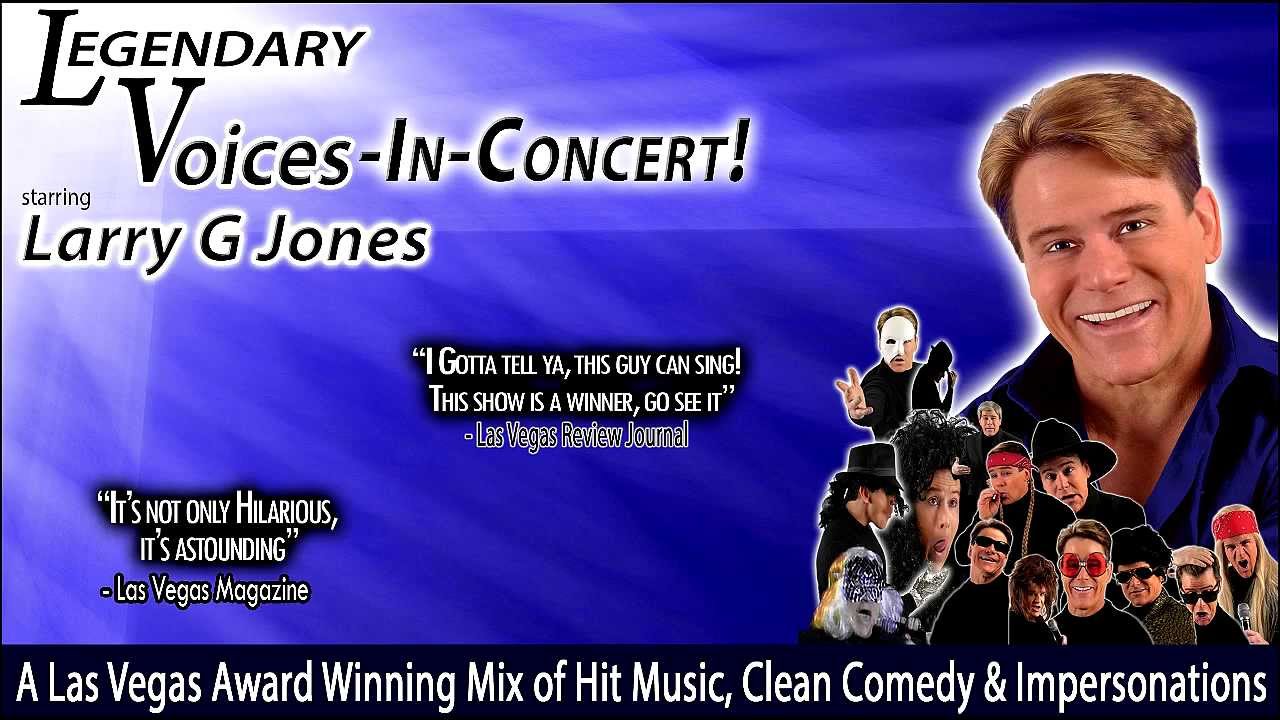 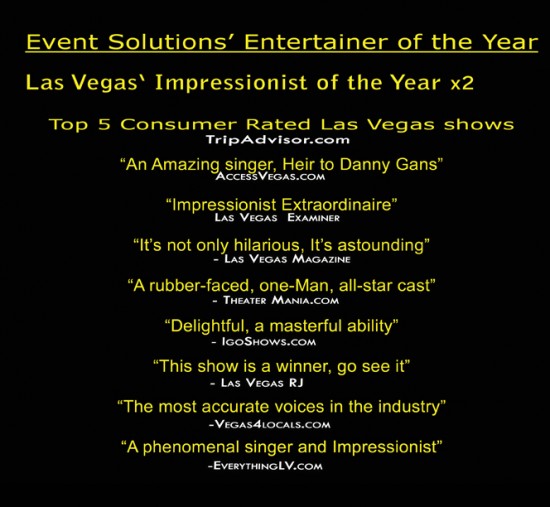 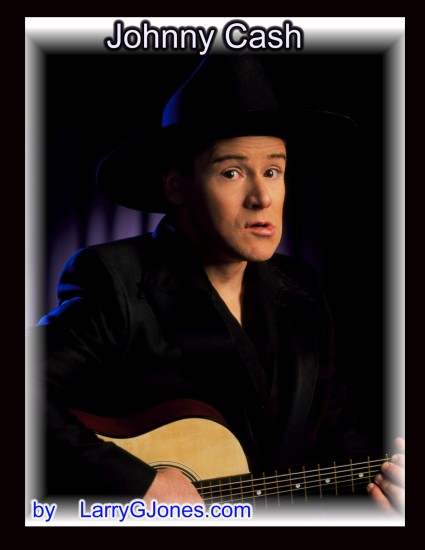 Go ahead and Call to Book Larry! 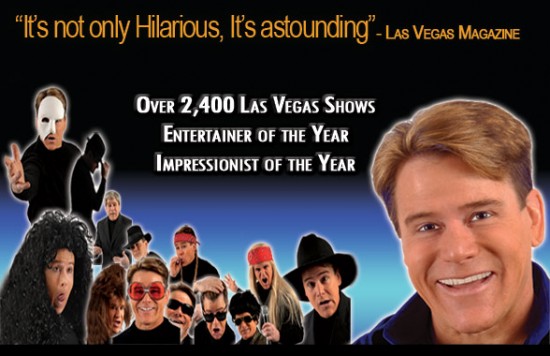 Great entertainment is your opportunity to make sure your event is remembered in a positive light.

Stresses will melt away with this dynamic, diverse and award winning mix of clean comedy and hit music. Your guests will laugh out loud, sing along, smile, stomp their feet and clap their hands as they are fully engaged in an interactive show that will be fondly remembered.

Larry will work directly with you to customize a show to fit your event's demographic, brand, message, and/or theme!

While you don't have to hire an entertainer who has been honored with multiple awards, AND 10 Years with their own raved about Las Vegas show, your guests may wish you had...

Larry was absolutely amazing. He did a video message as George W. Bush and was spot on. Can't recommend him enough!

Larry G. Jones had our audience captivated from the moment he took the stage! Larry is truly a multi-talented entertainer. Larry will blow you away with his amazing vocal range from Chubby Checker to Frankie Valli. Larry’s ability to impersonate will make you think you’re hearing and seeing the real deal. Larry’s comedic routines will make you laugh until tears roll down you face. Larry stayed in communication from first contact, though the booking process and right though ShowTime! Larry was easy to work with and has a great personality off stage. I highly recommend Larry for your event.

Response from The Multi-Award Winning 'Legendary Voices in Concert' Show:

Thanks for the great review Darren!
You and you're team are awesome!
Larry

It's a high-energy "dead-on" voice extravaganza featuring Billboard's greatest hits from music's biggest superstars. There's music for every taste and loads of laughs for all ages with this timeless celebration of singer, celebrity, and presidential parodies.

From Neil Diamond to Cher to Shrek you'll experience a huge variety of astoundingly accurate legendary singing and speaking impressions from the 1950's to today! Larry's use of physical comedy, parodies, props, and audience interaction will captivate even the most restless audiences and have them "eager to see what he'll do next!" Good clean fun (g-pg rated)!!
Multiple Las Vegas press sources claim that Larry G Jones has the most accurate voices in the industry. Some of the voices you'll hear include The Rat Pack, Tom Jones, Wayne Newton, The Temptations, The Platters, The Drifters, Johnny Mathis, Sammy Davis Jr., Johnny Cash, Cher, Gordon Lightfoot, Capt. Kirk, Bruce Springsteen, David Bowie, Harry Chapin, James Brown, the Bee Gees, Jimmy Buffet, Jerry Lee Lewis, & over 40 others including 6 ex-presidents reciting the Star Spangled Banner!

How about some of Larry's One-Man duets like Willie Nelson and Julio Iglesias, or Nat and Natalie Cole, or Patti Labelle and Michael McDonald!! Ray Charles has been hanging out with Ricky Martin, and Michael Jackson dedicates a song to Lisa Marie Presley, Bubbles, and Blanket.

Larry has performed at not only at virtually every Casino in Las Vegas and has entertained for many Fortune 500 companies like Taco Bell, Best Buy, Hewlett Packard, Disney, Bush Gardens and many more more.

When you combine All of the benefits below into one show, it's no wonder Larry has won so many awards and accolades for his performances as a corporate entertainer and a Las Vegas headliner.
Benefit from Variety - One corporate entertainer: Up to 75 superstars
in a one-man show. Las Vegas Magazine writer Jack Houston writes "This fast-moving show features about 70 impressions - everyone from Sammy Davis Jr., to Johnny Cash, to George W. Bush, to Bill Cosby to Cher get the Jones treatment." Its a hit parade featuring the worlds biggest entertainers performing their biggest hits ( many with a comic twist! ).

It is common knowledge that laughter lowers blood pressure, boosts immune systems, relieves stress and has a myriad of other wonderful benefits. That's why ever since Larry's recovery from a 'Terminal Cancer' diagnosis over 14 years ago, he has dedicated his life as a corporate entertainer and Las Vegas headliner to bringing the transformational joy of laughter and smiles to peoples' lives. Ted Newkirk from AccessVegas.com writes "He was buzzing through impressions so full of one-liners and comedic lyrics that you barely stopped laughing at the last one before he hit you with another zinger."

Benefit from familiar Music -Corporate Entertainment at its Best

In addition to boosting our memory and learning capabilities, many of the same health benefits of laughter also apply to music. These benefits are especially strong when it comes to familiar hit music that people know and love. Every corporate event has some element of great music and with a show that's been researched to be full of musical comedy and impressions from the worlds most popular entertainers' biggest hit songs, Larry's corporate entertainment presentation is just what the doctor ordered.

Benefit from familiar Impressions - Dozens of Singer and Celebrity Voices

Over the last 80 years, major television shows from the Jack Benny program to Saturday night live have launched the careers of entertainers with comedy impressionist parodies of major celebrities and presidents. Headline television and corporate entertainers like Will Ferrell, Joe Piscopo, Danny Gans, and Rich Little have been taking advantage of the fact that people love to reflect on the voices and memories of singers and celebrities they recognize. It's one thing to have a corporate entertainer who can sing well, but when they can actually duplicate the voices of the original artists, the impact becomes even greater.

Tom Wilkinson , the host of Vegas4Locals.com ( one of Las Vegas' top websites with a newsletter to over 50,000 tourists) said "Larry's singing impressions are perhaps the most accurate in the world...he is a phenomenal singer, comedian and impressionist for the entertainment capital of the world."

PLEASE EMAIL US FOR THE MOST UP TO DATE STAGE/TECHNICAL RIDER.

Please contact us for up to date Technical Requirements - You will need a professional PA system etc!

"Overall, Larry G Jones has the most technically accurate Impressionist Voices in the business. A phenomenal entertainer for the entertainment capital of the world" -Vegas4Locals.com

"Keeping up with the Joneses is never a problem for singer-comedian-impressionist Larry G. Jones. It's a trip down memory lane, accompanied by his remarkable two-tone hair and equally impressive vocal range. The fast-moving show features about 70 impressions - It never seems to matter whether the subject of his impersonation is male or female, high or low voice,.... it's not only hilarious, it's astounding."- Las Vegas Magazine

"A High energy show that routinely elicits dozens of characters in rapid succession. As talented as many on the Las Vegas strip" -Las Vegas Sun

"His mannerisms & vocalizations are dead-on, it is his comical parodies that set him apart." - Las Vegas Senior Press

"Heir to Danny Gans. He was buzzing through impressions so full of one-liners and comedic lyrics that you barely stopped laughing at the last one before he hit you with another zinger" -Accessvegas.com

"It's the delivery and comedic lyrics of the songs that make this show a winner." -L