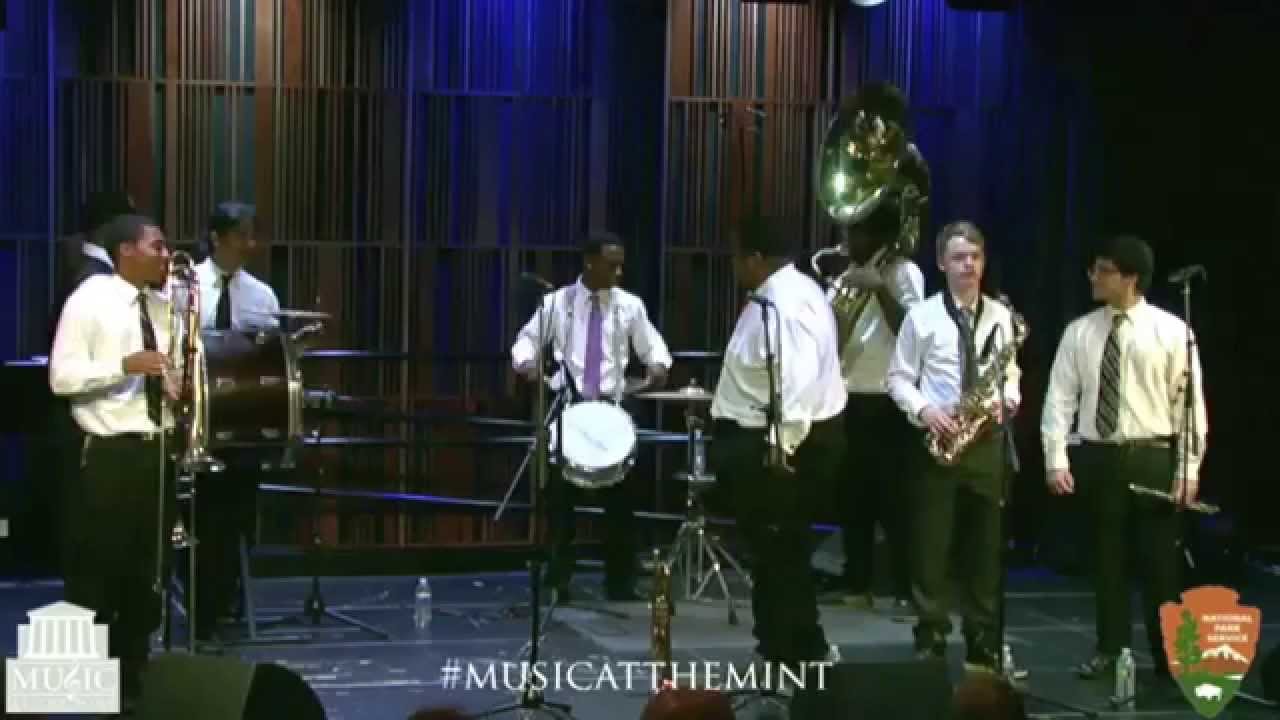 When The Saints Go Marching In 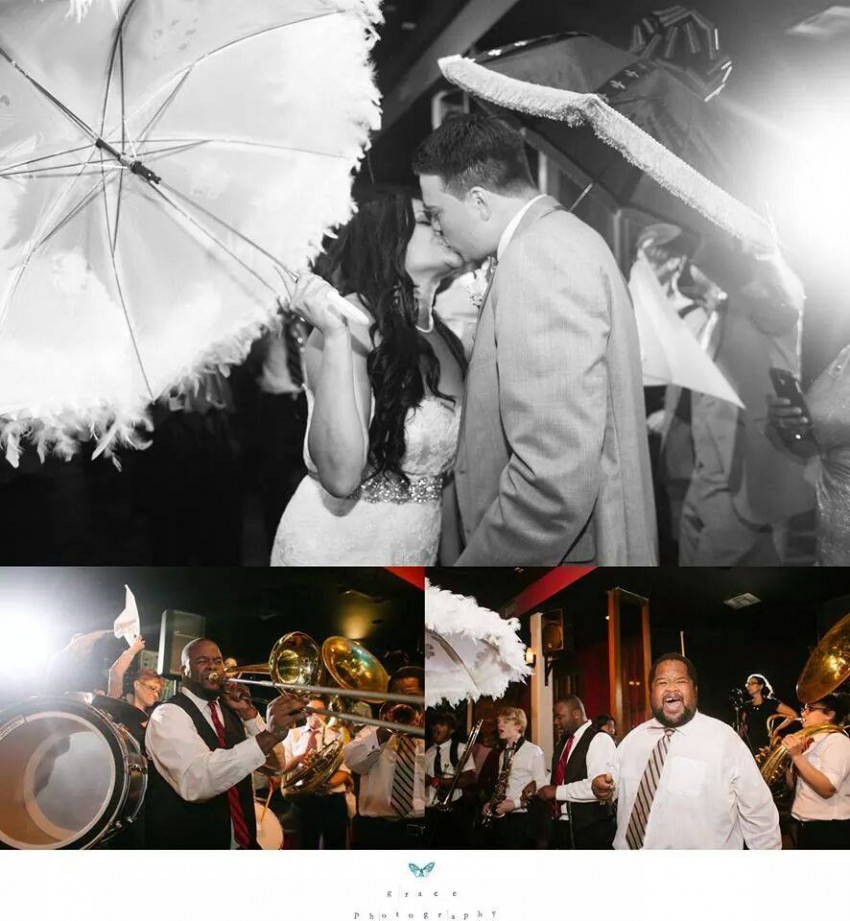 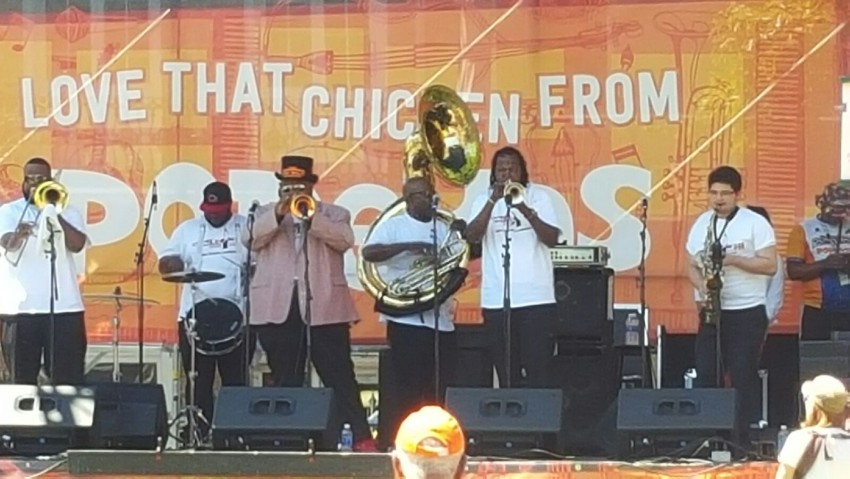 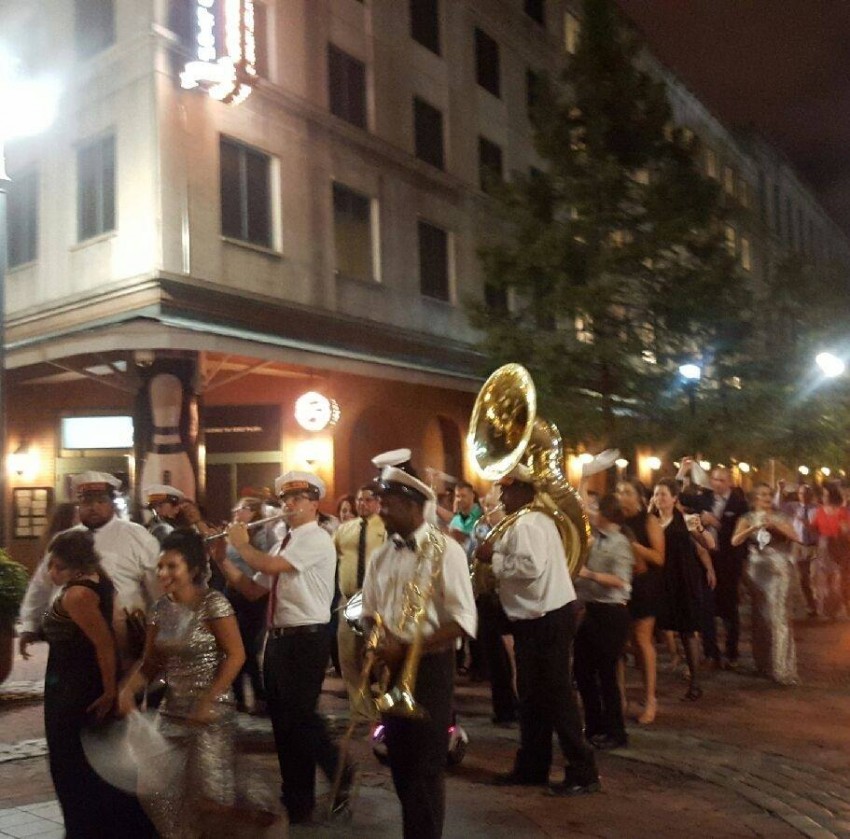 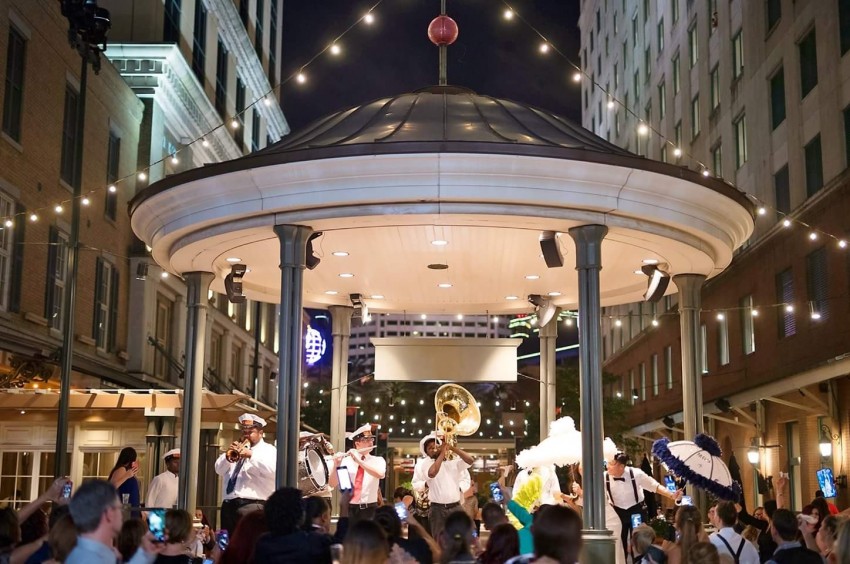 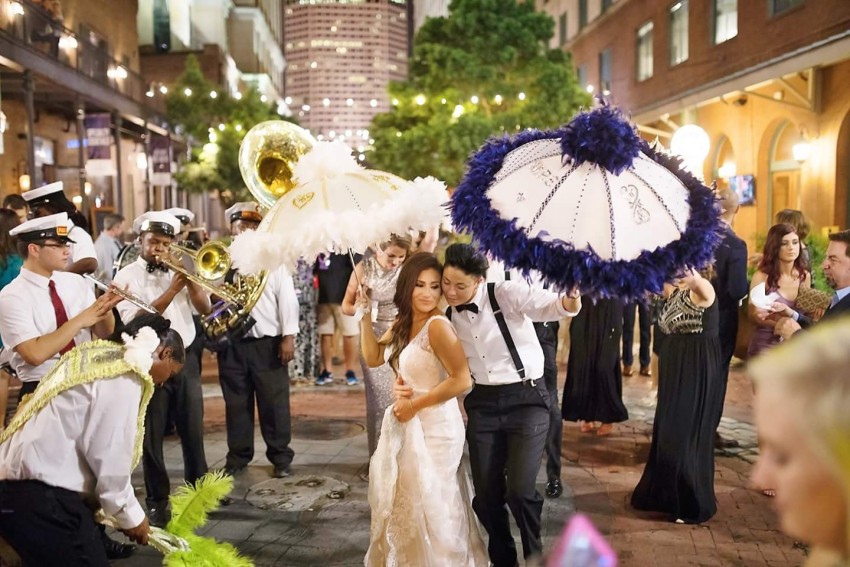 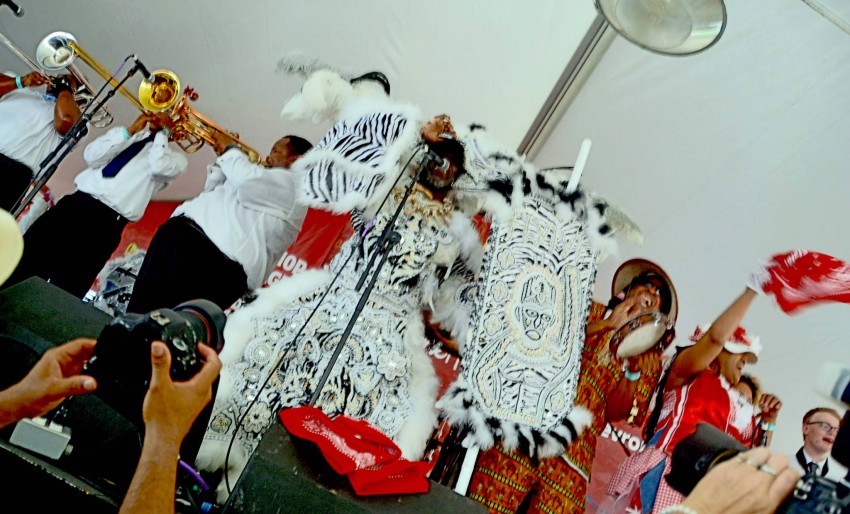 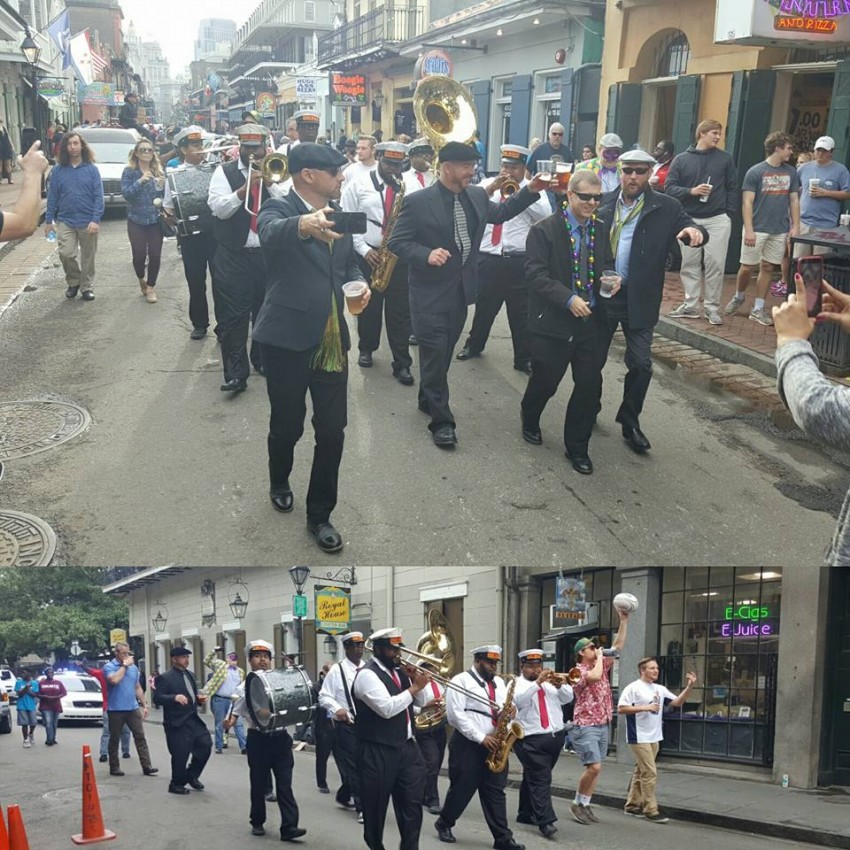 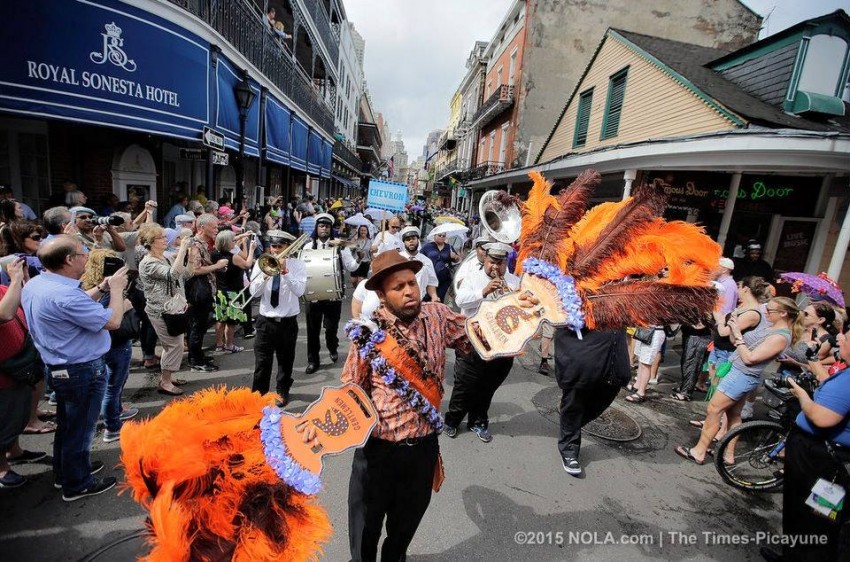 The Red Wolf Brass Band showcases New Orleans style experience through its energetic and electrifying style of music. The band is known for its unique blend of old and new schools of Traditional New Orleans music with a twist. Playing for numerous events such as the French Quarter Fest, Satchmo Fest, Leaf Festival in North Carolina, Creole Gumbo Festival, weddings and other events just to name a few, the band is sure to bring New Orleans excitement to any event. Most people’s initial reaction when first seeing the Red Wolf Brass Band is true surprise, but when they play, the band turns that astonishment into new fans just like you.

They were awesome, easy to communicate with before the event and it was SO much fun. I shopped around for different prices and theirs are competitively the best but also seriously the best band ive seen parading the streets

It was really a pleasure parading with you and as always thank you for your business.

So fun! So professional!

They showed up and even started playing a little early. They were lively and so.much.fun. It was absolutely perfect for our son's 1st birthday party. I would hire them again in a heartbeat!

The band was a blast! They were on time and very flexible, very easy to work with. They sounded great and strongly recommend.

What a great 💑 couple thank you for letting us be part of your special moments. ❤

Red Wolf Brass Band played a porch birthday party. They showed up early, took COVID seriously, got the crowd engaged and were so much fun. They were lively and had such a great vibe. Will definitely be using them again!!

Our group had a great time! Everyone a long the streets and in the bars was dancing and taking pictures. Great time!

Fantastic Experience for Second Line at Our Wedding

Amazing band. We hired Red Wolf Brass Band for the second line at our wedding, and they did not disappoint. We got so many comments from our guests that absolutely loved the experience (most had never experienced a second line). I would book them again in a second!

The performance by Red Wolf Brass band was fabulous. They arrived before time with sufficient musicians. The music they played had me, my guest and others on the sideline stepping and dancing joyfully. I was well pleased.

Thank you we had a blast parading you through New Orleans. Please keep us in mind for all your entertainment needs.

Responsive, talented, professional and on time!

The Red Wolf Brass Band sent my great-grandmother home on a high note. The band is very talented. They communicated well, were early to the event and just sounded great. They played songs by request as well. I would definitely hire them again for future events.

Thank you for letting us be a part of your great grandmother's celebration of life because in New Orleans we do not mourn the passing we celebrate the life.

We were set to have my son's 40th birthday second line when disaster struck. The band leader called to say that the NOPD would not be giving out any permits for the 2 weekends before Mardi Gras. We were pretty disappointed, but what can you do? Well, you can run your second line on the down low. They were great! Arrived on time at the venue and played a good variety of songs. Our guests, mostly from out of town, were delighted!! The day was saved!!

Hey the show must go on and we definitely like putting on a show lol. Thank you for your business

Desmond and the band were warm, professional, great musicians and generous with their time and talents. They were perfect for the occasion and I couldn’t have asked for a better band. My dearly departed mother was in good hands. Thank you!

Terrific working with Desmond. The music was great and he was extremely professional.

Our group was from Canada so we were unsure how to go about booking everything. Desmond (the band leader) was great about communicating with us about all the details, booked the route and police escorts for us, and was at the starting location well ahead of our set start time to setup.
The band itself was really great and energetic, and we all had a really great time, and played some (I think) New Orleans style music as well as a few pop songs. And once we reached the end of our route, the band stuck around and played another song or two while people joined in on dancing from the street.

Great group even though we were a pain!

These guys were great! Great musicians and fun with our guests.
Even though the cops were late to provide the escort and then totally CHANGED OUR ROUTE (adding an extra 8 blocks of walking) without telling us, RED WOLF kept on going along with us.
Thanks for your patients guys!
Hire them!

Made the event great!

Desmond, did exactly as he said. Timely cordial and talented. Great brass. Made the event into a wonderful experience. Thank you.

Band arrived promptly, dressed for action, and in high spirits.

Our miniature parade went off without a hitch. Red Wolf is a solid band, and had some great song selections.

Highly recommend, we will treasure this memory forever.

Once again thank you for your business we had a blast.

We booked these guys for the second line parade for our wedding and it was ABSOLUTELY AMAZING!!! they were not only punctual but also professional. I would book them again in a heartbeat and I suggest you do the same if you're looking for a brass band and they are available! They made our day more memorable than we could ever imagine and for that I thank them. We will never forget that day, this band and the faces of our guests and strangers as we walked from Jackson square to the palace cafe for a lifetime!!! Thank you again guys, job well done...??two thumbs up for The Red Wolf Brass Band

We booked these guys for the second line parade for our wedding and it was ABSOLUTELY AMAZING!!! they were not only punctual but also professional. I would book them again in a heartbeat and I suggest you do the same if you're looking for a brass band and they are available! They made our day more memorable than we could ever imagine and for that I thank them. We will never forget that day, this band and the faces of our guests and strangers as we walked from Jackson square to the palace cafe for a lifetime!!! Thank you again guys, job well done...??two thumbs up for The Red Wolf Brass Band

Thank you for giving the Red Wolf Brass Band opportunity to be part of your special day. Iy was a pleasure to play for such a great couple.

Couldn't Have Asked For A Better Band

My wife and I used Red Wolf Brass Band for a Second Line out of our reception on Fulton Street in New Orleans and we couldn't have asked for a better band. They showed up on time and sounded AMAZING! We had people texting and calling us for the next several days to tell us that the the highlight of our wedding was the 2nd line band. They even had one band member playing, while balancing on a neon hover board! https://www.facebook.com/pkevin67/posts/1069384286444254. If the link works, that is a link to a small video that a stranger took from off the street. Can't say enough about the band! Thank you so much.

Thank you so much and it was a pleasure playing for such a beautiful couple:). Congratulations

When you hire the Red Wolf Brass Band you get a band that sounds, looks and acts the part of a professional.

Known for putting a new swing on traditional music the band has been dazzling crowds here and abroad. With their energy and charisma, the Red Wolf Brass Band brings to its root that was dance music.

In April of 2014 The Red Wolf Brass Band released their debut cd entitled “7th Period”. The cd consisted of timeless New Orleans’ classics to original music by the Red Wolf Brass Band and has special guest Shamarr Allen, Tannon Williams of the Brass-A-Holics, Erion Williams and Paul Robertson of the Soul Rebels and more. Since that time the band has been doing seminars and workshops on New Orleans’ culture