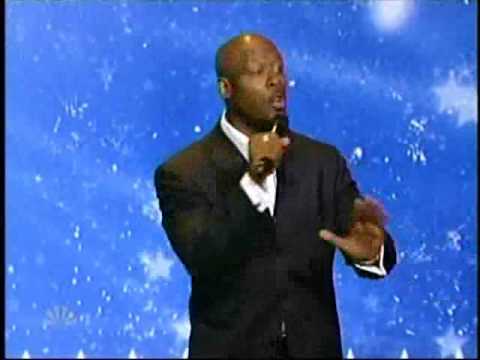 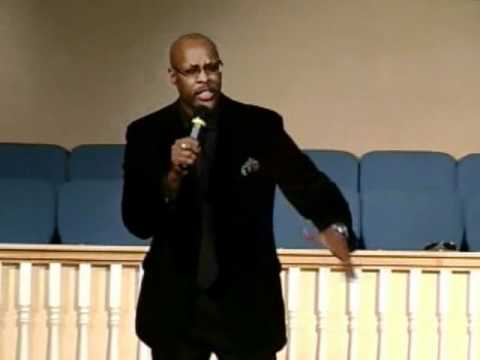 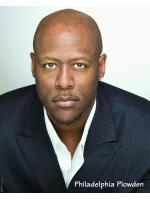 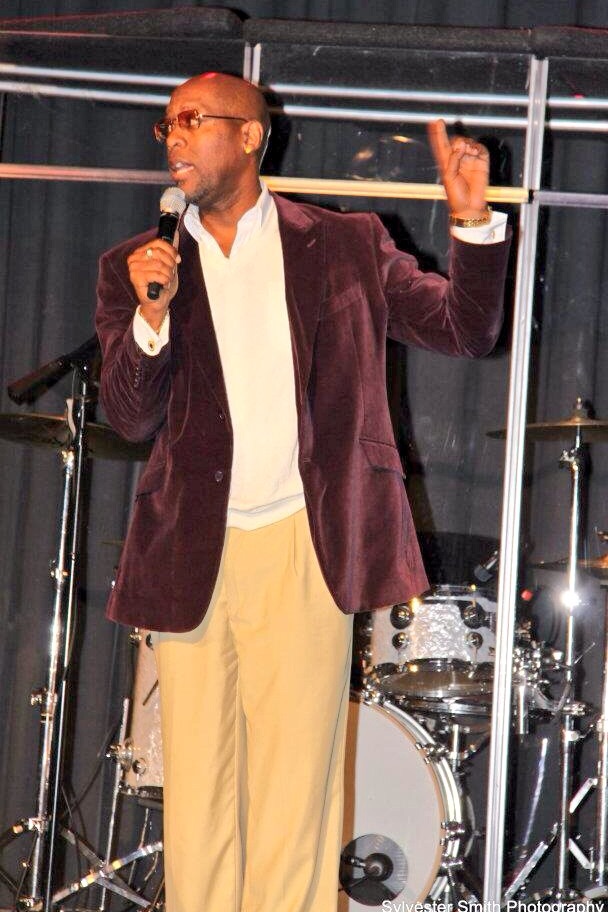 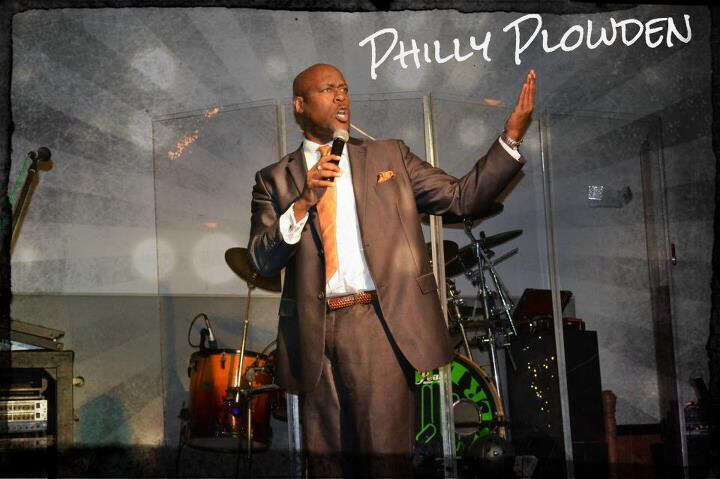 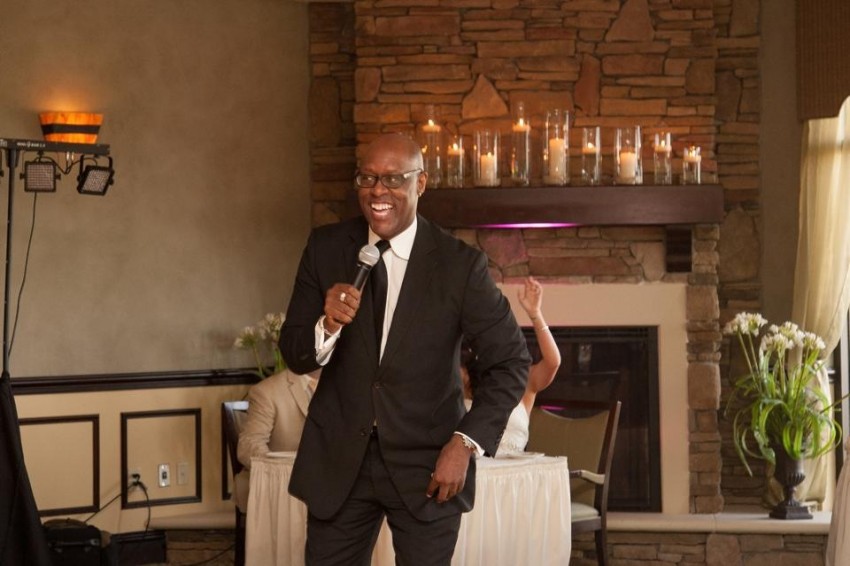 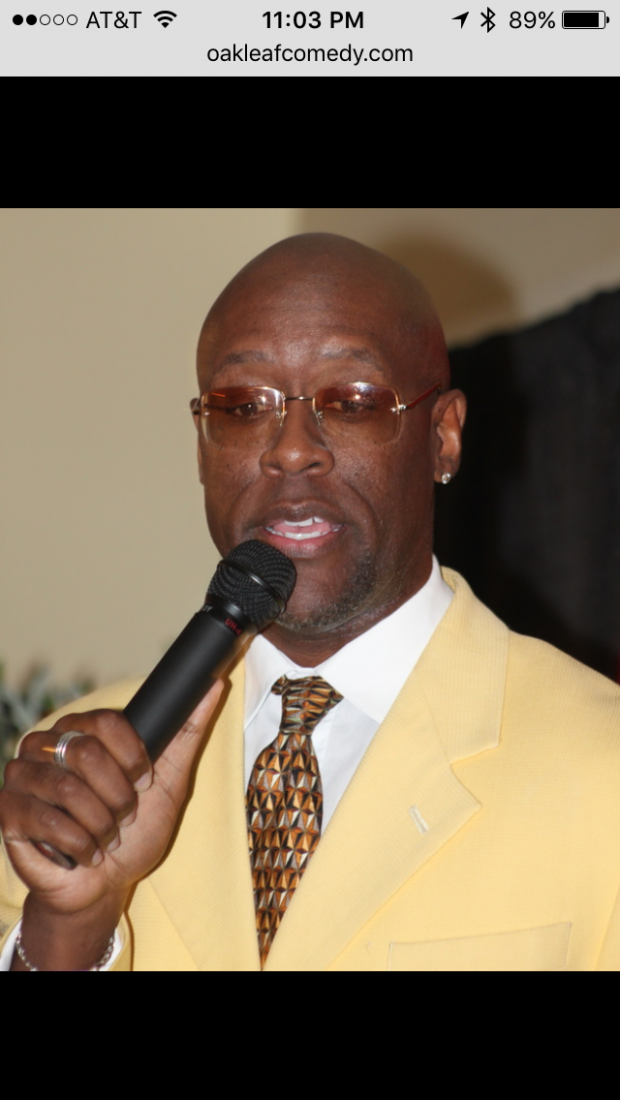 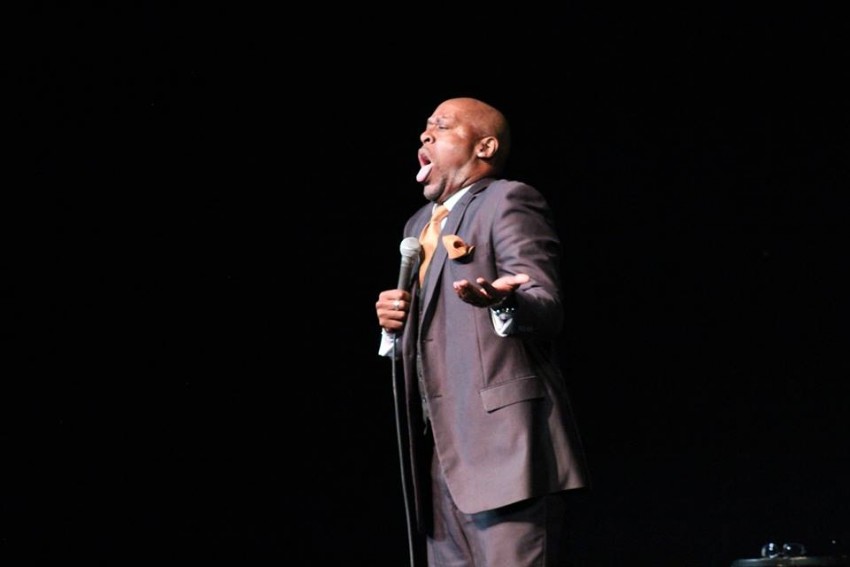 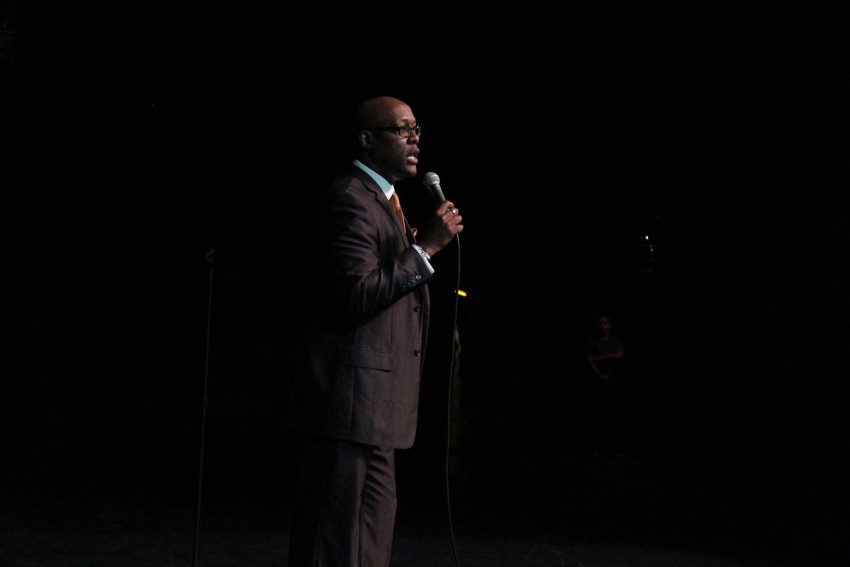 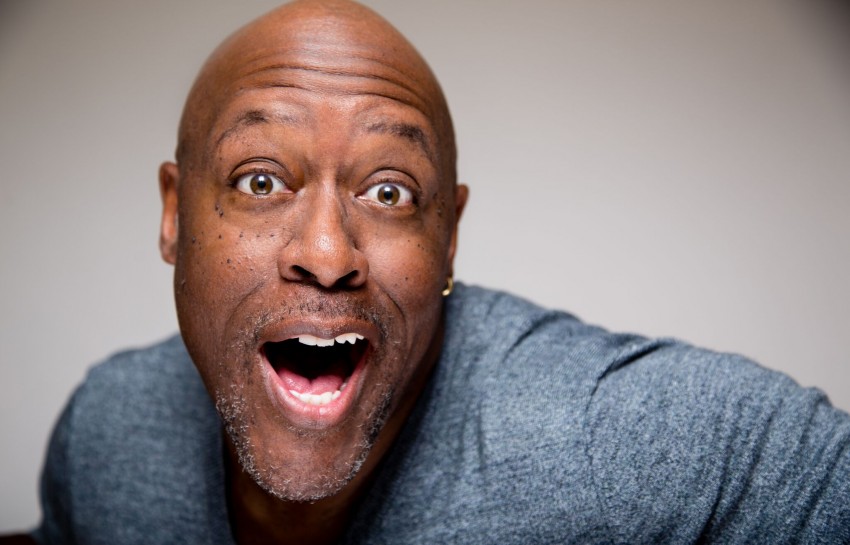 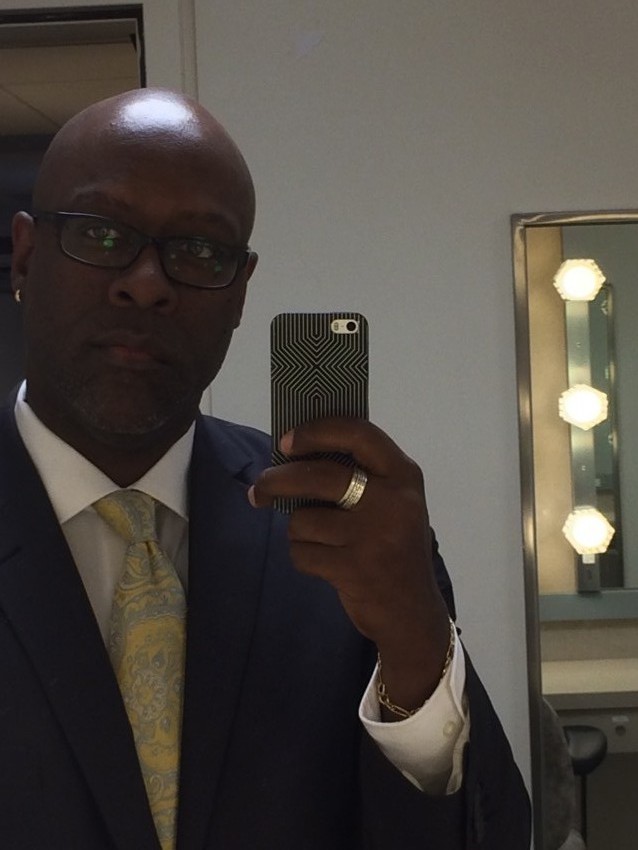 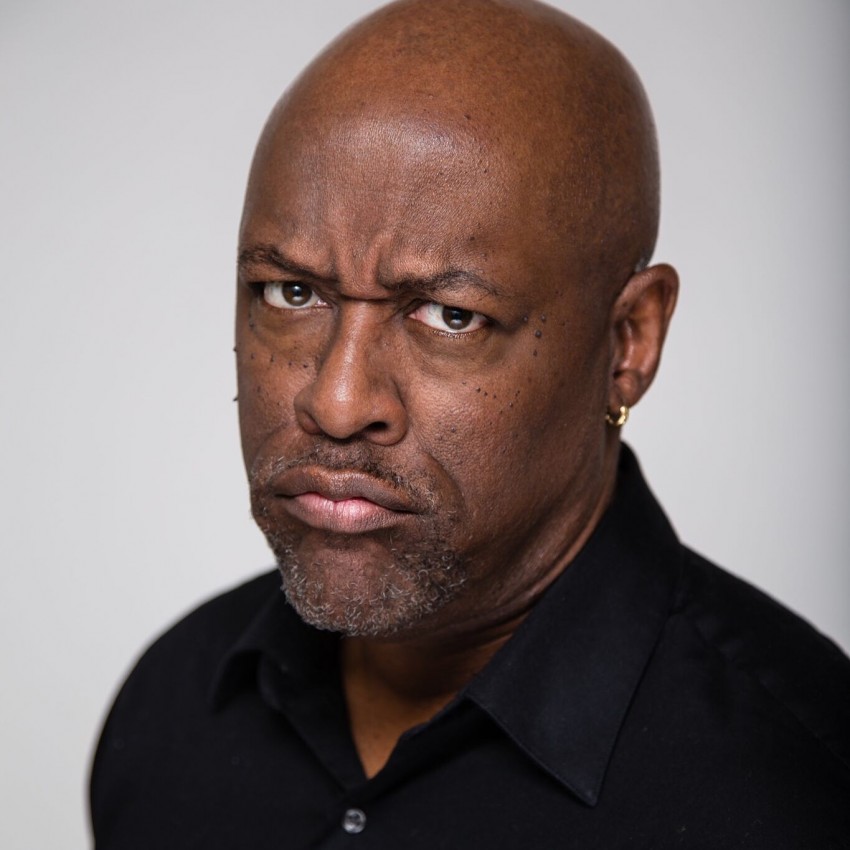 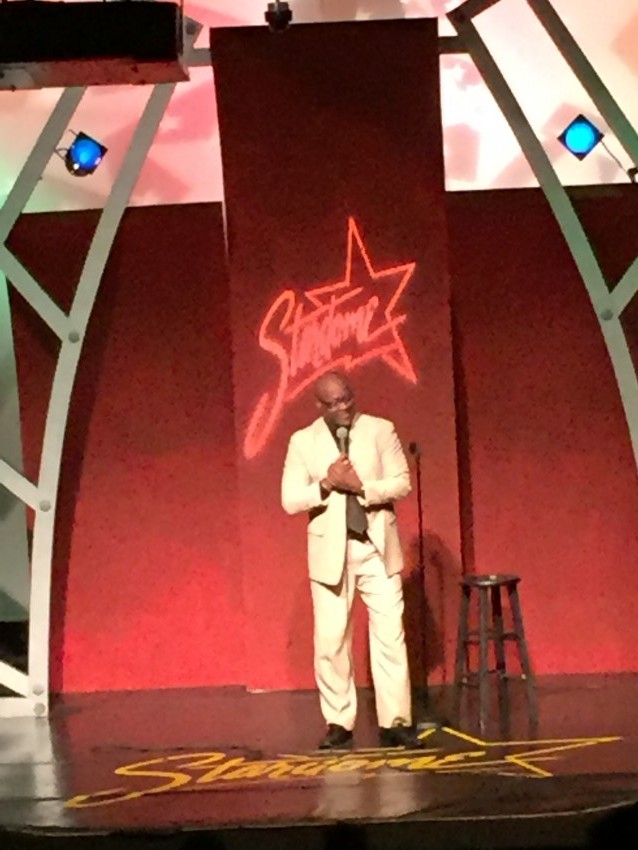 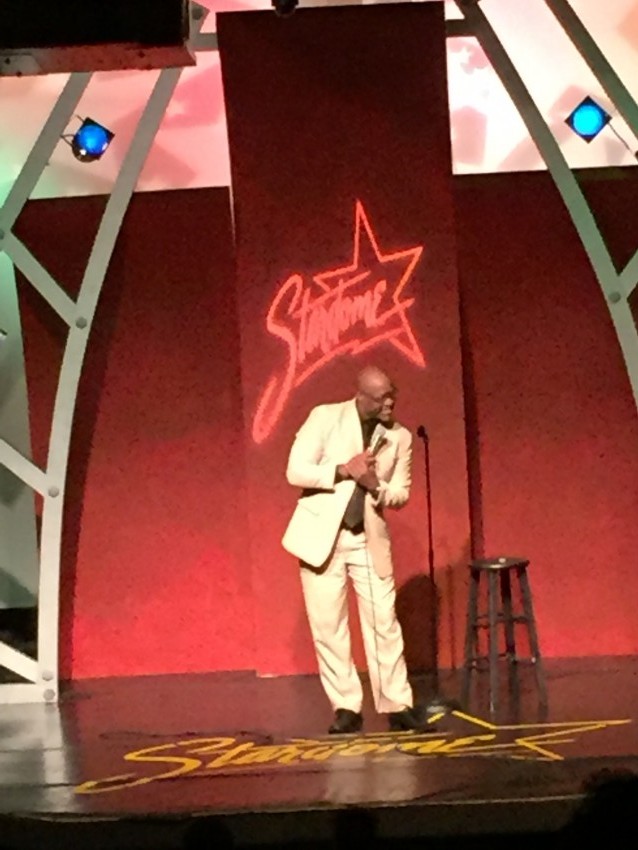 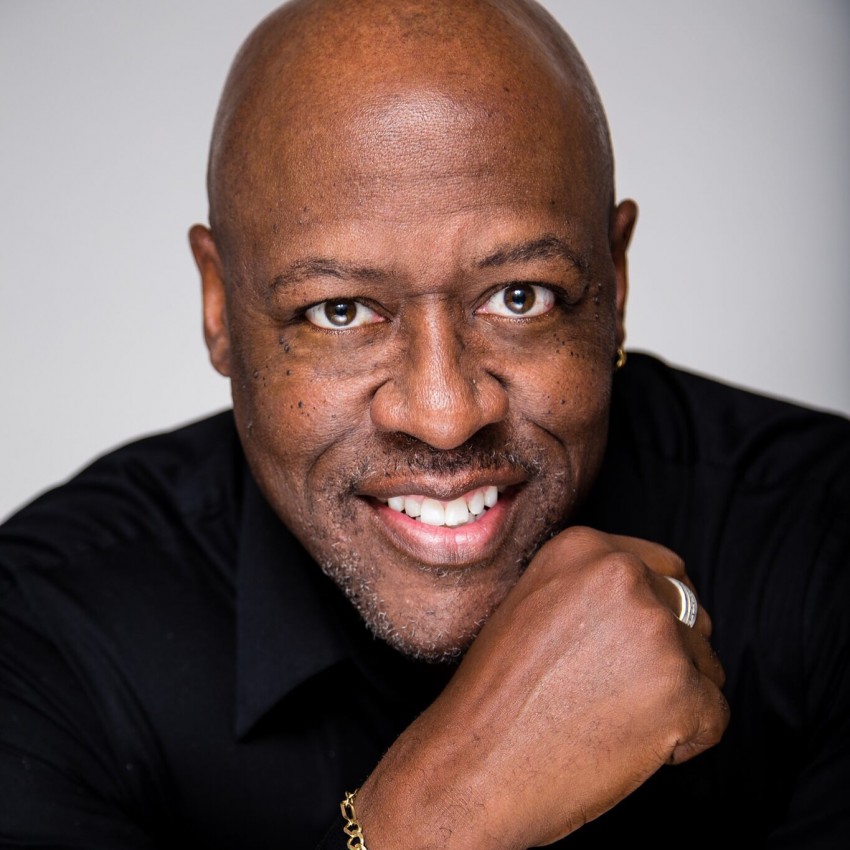 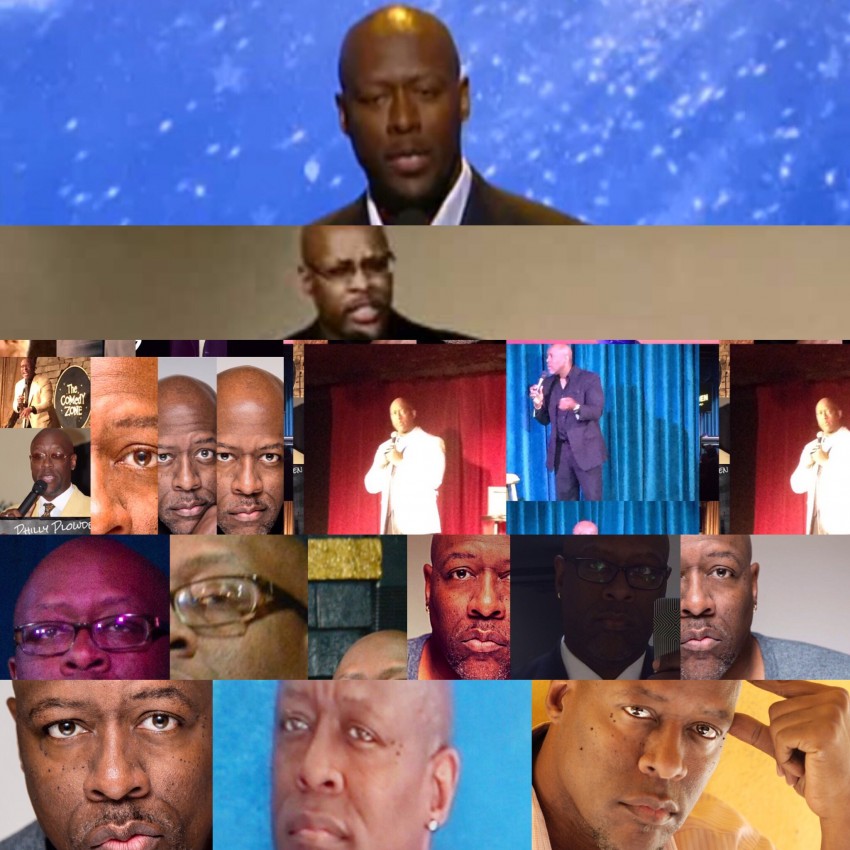 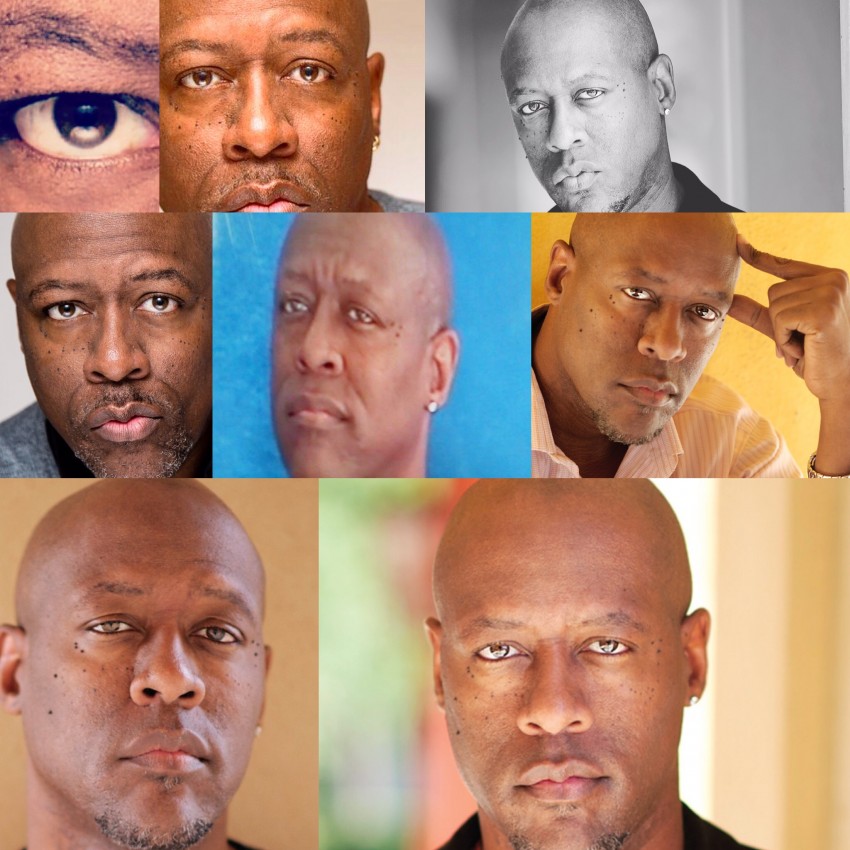 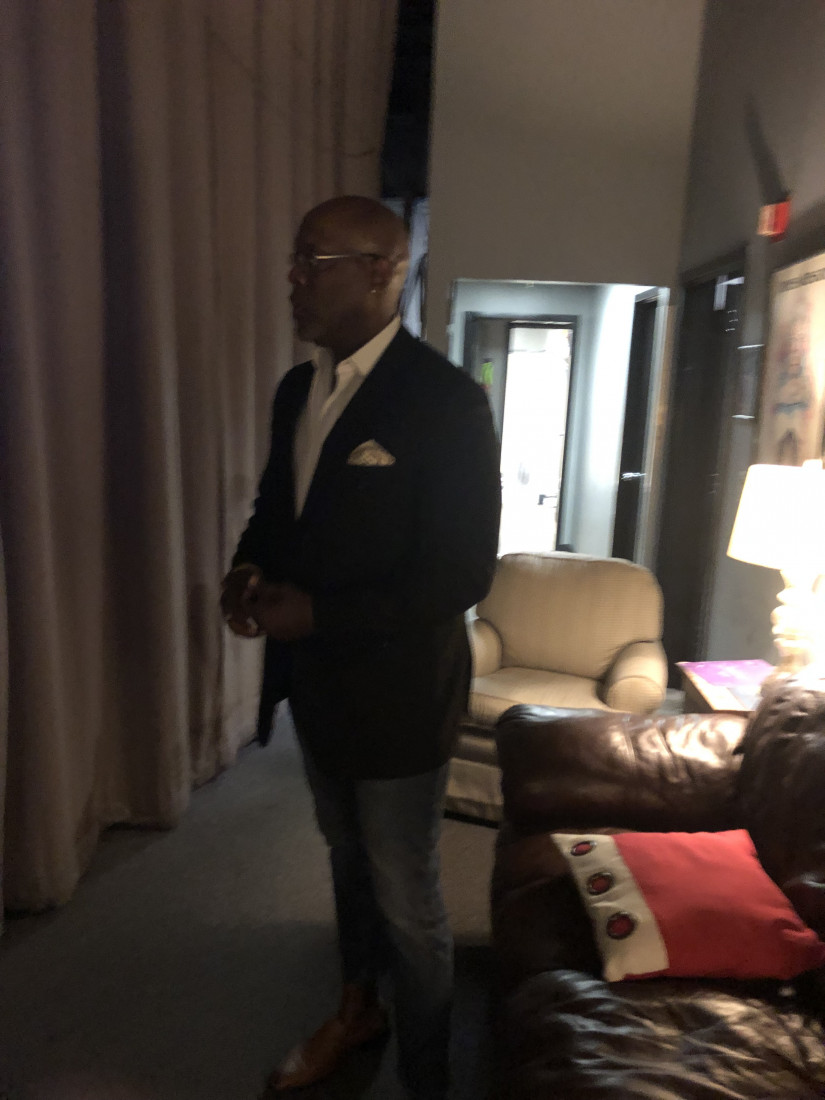 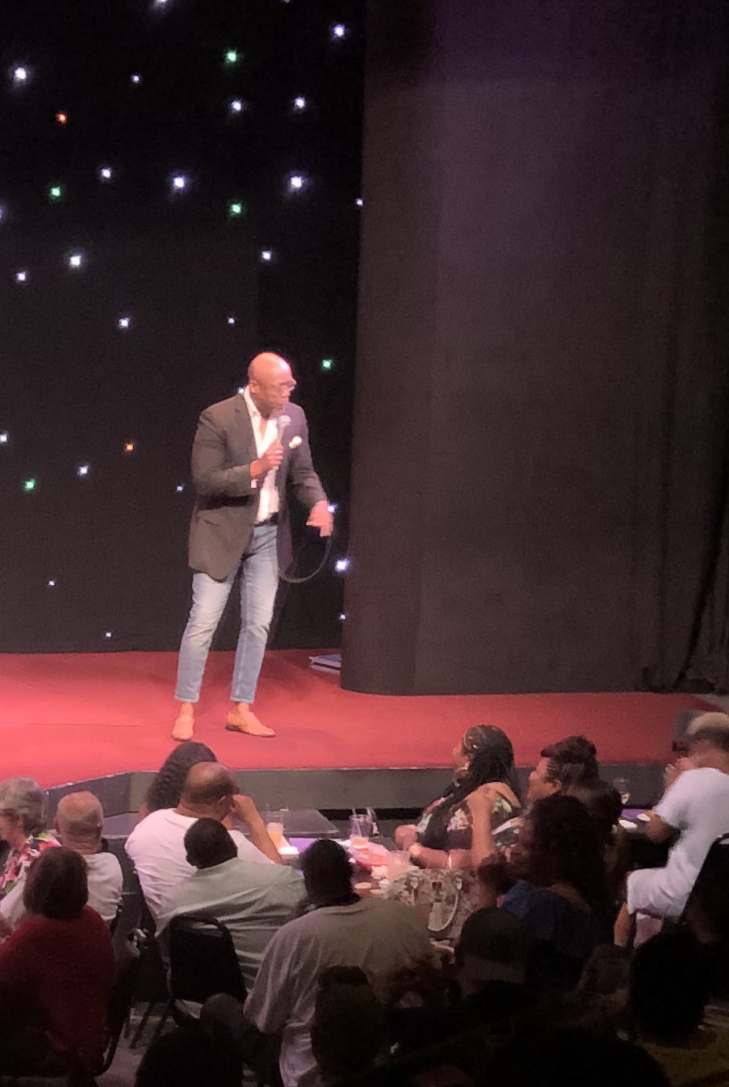 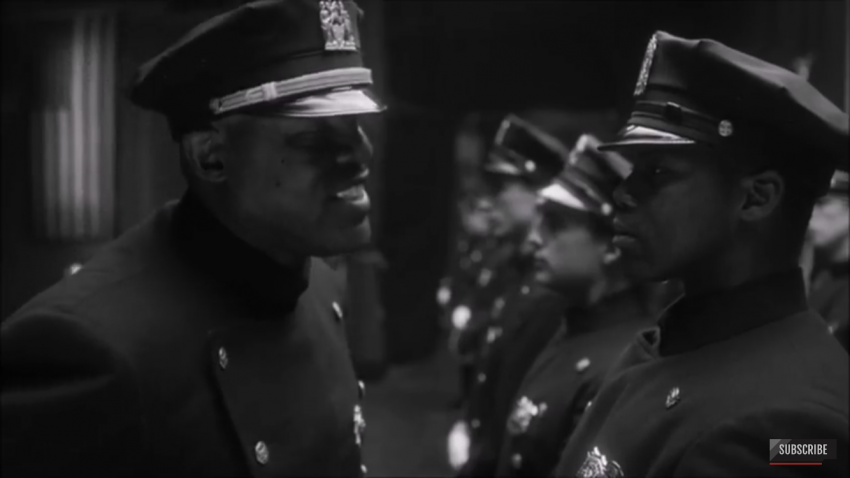 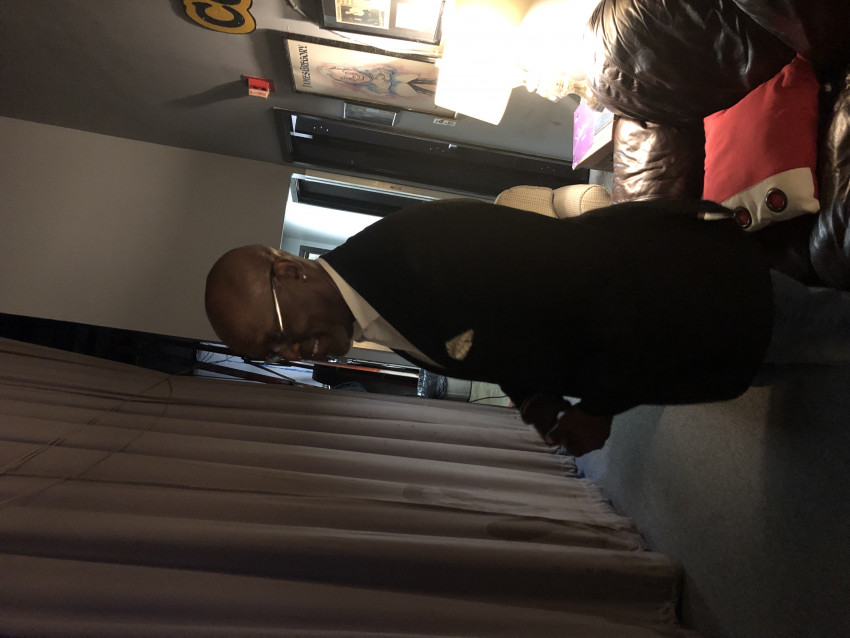 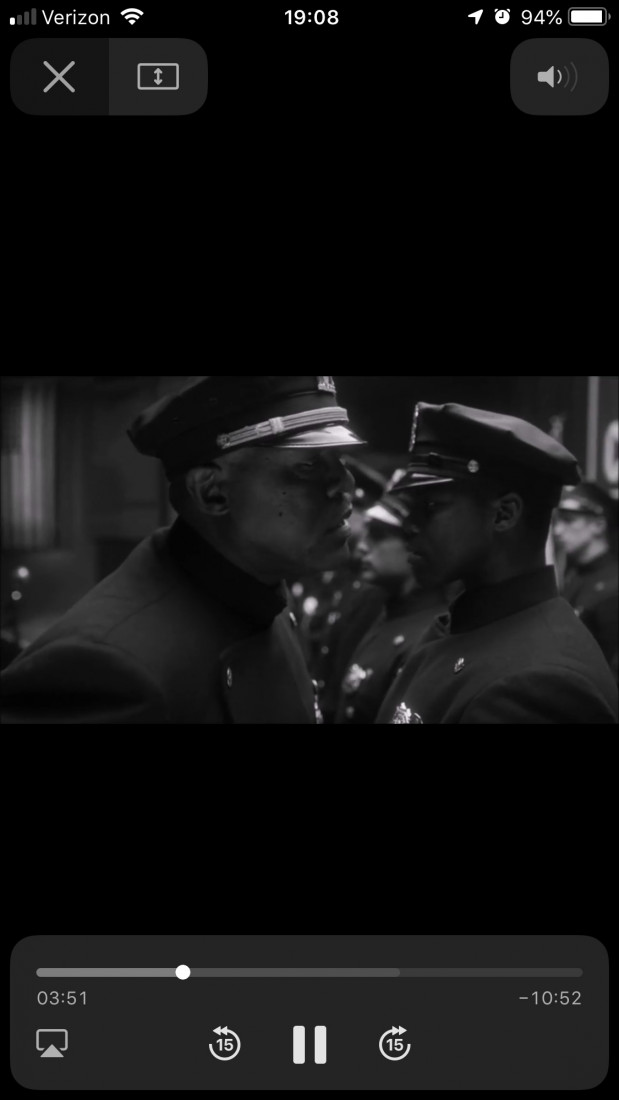 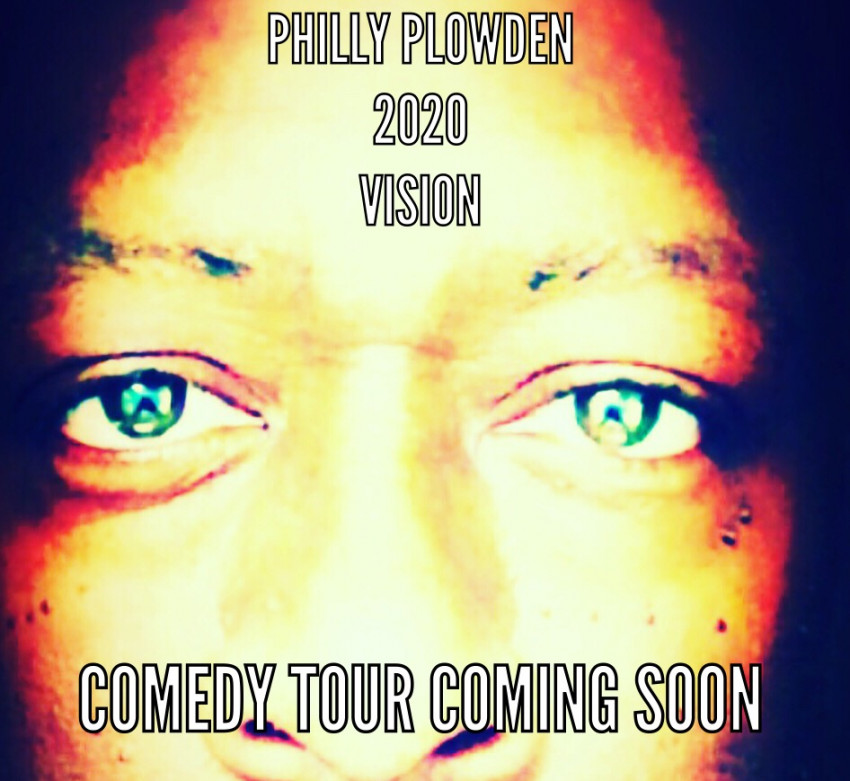 Philly Plowden is one of the most sound Actor/Comedian/Emcees working today. He can take an audience on a 200 mph trip that could stop at any point along the journey. His most recent theatrical work includes HBO’s Watchmen, NCIS New Orleans,The series Valor & TVOne’s Fatal Attraction. Philly Plowden travels throughout the United States headlining comedy clubs & corporate events.Philly served as opening act for such industry legends as Julio Iglesias,The late Robert Palmer,comedy legend the late Richard Jeni & The legendary miss Diana Ross. Philly Plowden also enjoyed a very successful appearance on season of NBC's America Got Talent. Taking a journey with Philly is a fun experience for all!

I hired Philly for a party at my home based on his reviews and would have been satisfied if he was half as funny as prior comedians that I have hired. Needless to say, he was a hundred times better than any comedian that I have EVER seen! All of my guests were extremely pleased with his performance. If u need a good laugh hire any comedian of your choosing, but if you want to laugh uncontrollably until your stomach hurts and you run out of tears in a fetal position call Philly!

Three words describe Philly: hilarious, flashy and brilliant!
On two separate occasions, Philly Plowden performed his stand up comedy routine for events sponsored by my veterans group. His brilliant interaction with audiences makes each performance unique as he brings the audience into the action. He is consistently funny, his sense of humor in good taste and....he had us laughing until our faces hurt!
Philly's rare awareness of peoples sensitivities gives him a power to pour it on the heckler in a comical way, and on the other hand, "dance, almost reverently, in a merry repartee with a single mom whose life was getting her three children through college and on to successful careers.
Everyone's favorite was his finale, in which, incredibly, he made up the words to a song sung to a "blues" cadence, that embodied all the give and take he had with members of the audience. He hit it out of the park!
We were still chuckling about the stuff he came up with long after he left.
Mike Burns
vp Florida Veterans For Common Sense

This year I decided to change up our company holiday party and add a comedian. I was a bit nervous to say the least and only seeing a few clips on YouTube of Philly, I thought I was safe with his act; however, a comedian is going to go one way or the other.
When Philly arrived, he noticed my nerves, and yes with that, I became part of his act that night. He was right on target with my personality and the employees responded. The crowd went crazy with Philly for over an hour. Since I am here, writing a review, Philly was a hit and I am still employed.
Philly had some material pre-arranged for his act; however, when he went adlib with the crowd; the crowd came alive. Philly had the crowd laughing for his entire performance. I highly recommend Philly.

I saw Philly at a political fundraiser last night and he was very funny. My cheeks hurt from laughing so much. His energy and wit keep your attention. He did a great job of involving the people seated nearby and he did this amazing rif of a Michael Jackson song at the end of his set that incorporated all he had learned about the audience in rhyming lyric. So funny - thank you, Philly. Hope we cross paths again.

Philly is a total crack-up. I heard him perform at a live event and immediately went home to look him up on the web. I was so surprised to see so much of his material on youtube. I had a blast watching clip after clip. This guy is amazing. His comedy is fresh and clean. I loved every minute of it! Can't wait to see him again.

Expect the unexpected. I always go where the moment and energy of the show takes me. This allows me to always remain fresh and creative during the Performance. My show can be as spicy as PG-13.
I never work dirty however I can stand in front of anyone and get the job done!

Philly Plowden is one of the most sound Actors/Comedians/Emcees working today. The essence of Philly has been Describe as someone who's "Deep as a well and dark as a cave. He loves Dick Van Dyke, but won't give up his BLACKNESS!"

As a humorist his observations & revelations about the human condition, mixed with stories from his own life, take an audience on a 200mph trip that could stop at any point along the journey.
As an Emcee he brings a old school style and skill set to any event or show with a new school energy.
His most recent commercial work includes being the spokesperson for Sweetbay Supermarkets chain and Cash America Pawn Shops. As a comic he travels throughout the United States and parts of the world performing his stand up show to great reviews! He has also appeared on season three of NBC's America Got Talent...... Taking a journey with Philly is a fun experience for all!

Philly Plowden is also a comedy instructor who uses comedy to help those wannabe class jokester refocus their energy in the right direction!

Many students use humor as an outlet and as a distraction from what they fear. This fear can be caused by personal, social, and academic challenges. The inappropriate use of humor can cause disruptions to the student’s academic success, and also to there classmates.

Integrating humor effectively has been proven to reduce stress, minimize tension and enhance overall well-being. These are all critical elements to enhance a student’s academic experience.

COMEDY 101, presented by Philly Plowden, is a workshop designed to Encourage, Motivate, and guide students into using their comic energy constructively.

COMEDY 101 facilitates social adjustment through group interaction and applied humor. Student’s burn comic energy in a constructive format and not use there humor as a way of taking focus off the teacher whose responsibilities are far greater than ever.

Comedy 101 will offer the principles on how to write comedy routines, how to draw the humor from one’s own life, exploring improvisation techniques, losing the fear of speaking in a public format, stimulated positive creative energy, as well as learning the critical elements of a professional career in the world of stand up comedy. Your school or community center may have the next Jerry Seinfeld, Chris Rock, or Wayne Brady!

Based on your needs, COMEDY 101 can be offer many formats. Group activity and a special feature provide students with the opportunity for immediate application and reinforcement of learned skills. The workshop is a great addition to a school assembly; youth group meetings, student leadership training, or as a special program for after-school.

Try something different to get your students attention.

Fees for these services range per workshop. Travel fees may apply.

Proper lighting and Soundsystem if at all possible!

I prefer not to perform while people are eating. I like the guest to be in place and in anticipation for comedy performance!

A microphone and mic stand is preferred. Mic stand is a preference if it is possible!