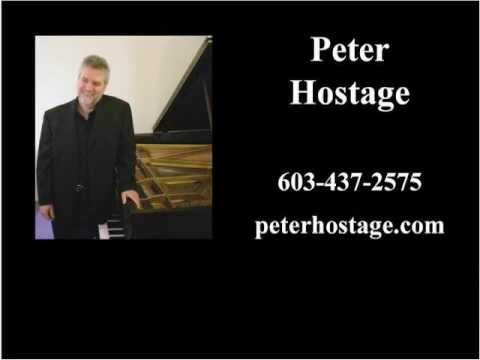 Jazz Piano For Your Reception

With over 30 yrs. of professional experience, Peter Hostage will provide the perfect musical backdrop to your special occasion or event. Songs from the “Great American Songbook:” including pieces by the great composers such as Cole Porter, Rodgers and Hart, Gershwin, Ellington and others make up the huge repertoire that Peter draws from. Styles include standards, swing, jazz, blues, bossa nova, and even rock.

Mr. Hostage has performed in many of the major hotels and event venues throughout New England, and is also available for functions in private homes. No piano at your venue? No problem, Peter will bring his pro level piano keyboard, no extra charge!
Free Quote on request!

To begin with, there are so many jazz styles that hiring a jazz pianist to play in the style you envision can sometimes be hit or miss, but this wasn't the case with Peter. He took the time to understand where our interests lie. In our case, I envisioned music in the style of Tommy Flanagan, and Peter didn't disappoint. He was fabulous. I later learned that he's an incredible swing player and can play in whichever style the audience is interested in, and he didn't make himself the center of attention during our reception, playing the perfect role and taking requests as they came along. He was friendly and very pleasant. It's hard to imagine that we could have made a better choice. Hats off to Peter!

What to expect:
- A performer with high professional standards
- Dressed for the occasion
- On time
- Courteous and accommodating
- A classic repertoire
- Professional equipment

Peter Hostage plays the "American Songbook;" standards, jazz, swing, blues, bossa nova and more. Peter has been performing throughout New England for over 30 years, as a solo pianist, with his jazz trio, and with larger bands. Peter is a full time musician, making his living from performing and teaching private lessons at his home studio in Londonderry, NH.

He has recorded 5 jazz and jazz/blues CDs: "Do That" (1999) with the Peter Hostage Trio; "Swinging the Blues (2004), with the Peter Hostage Situation; "American Standard Blue"(2008) with his trio and 5 piece band; and "The Wayback Machine" (2012), which is a collection of songs from the birth of jazz & blues; and his latest, "Uptown, " a collection of original jazz & blues.

Peter learned jazz piano at Berklee College of Music in Boston, MA, which he attended from 1978 to 1982. He is also a part-time piano tuner, and tunes for local concert venues including Tupelo Music Hall in Londonderry, NH and the Palace Theater in Manchester, NH.