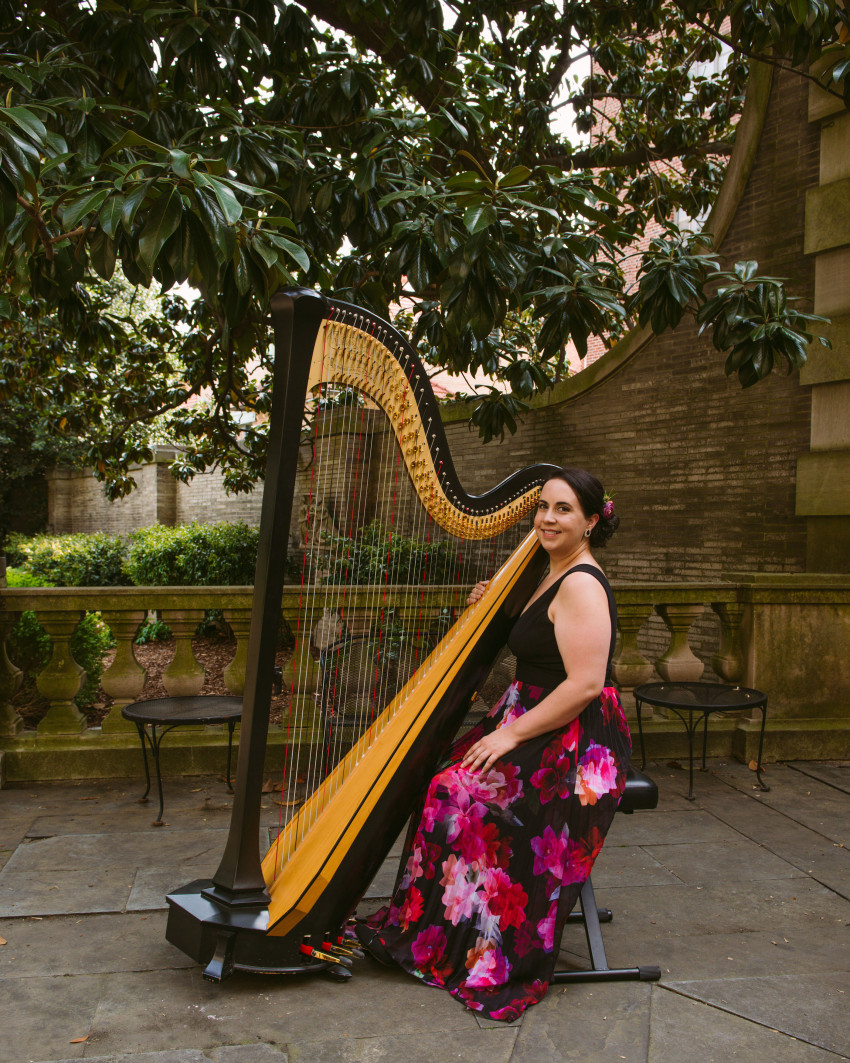 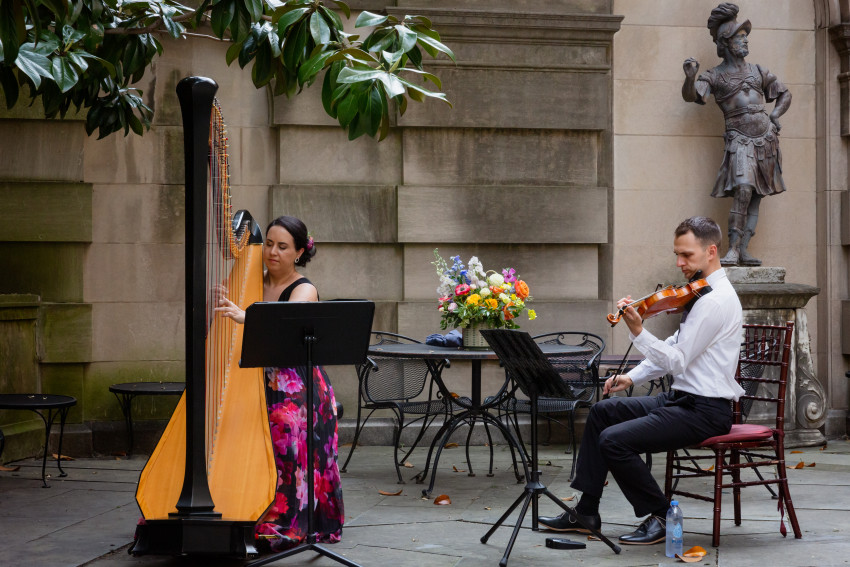 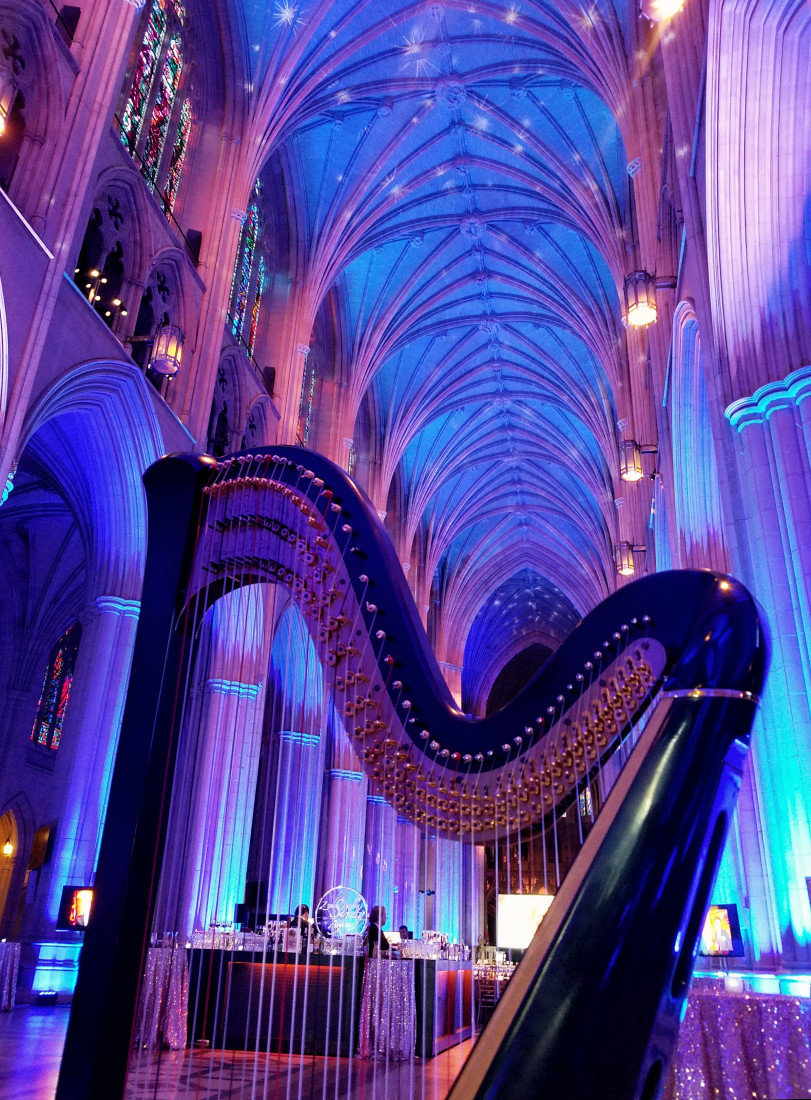 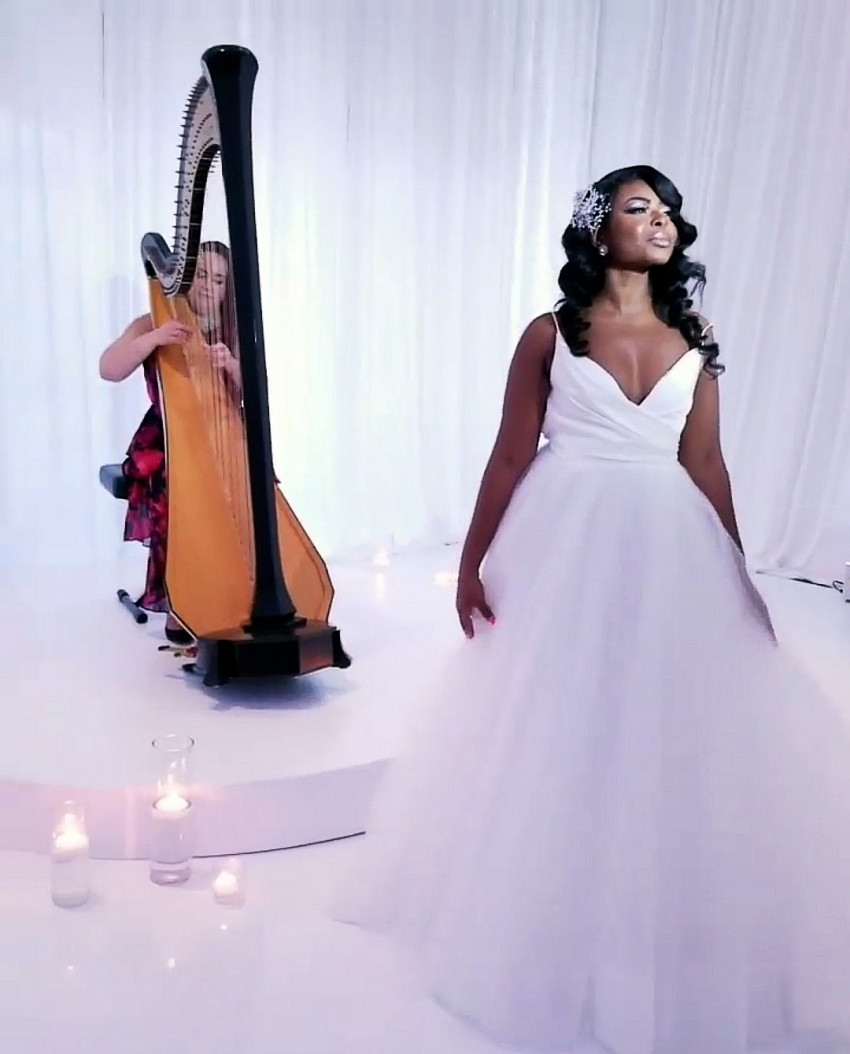 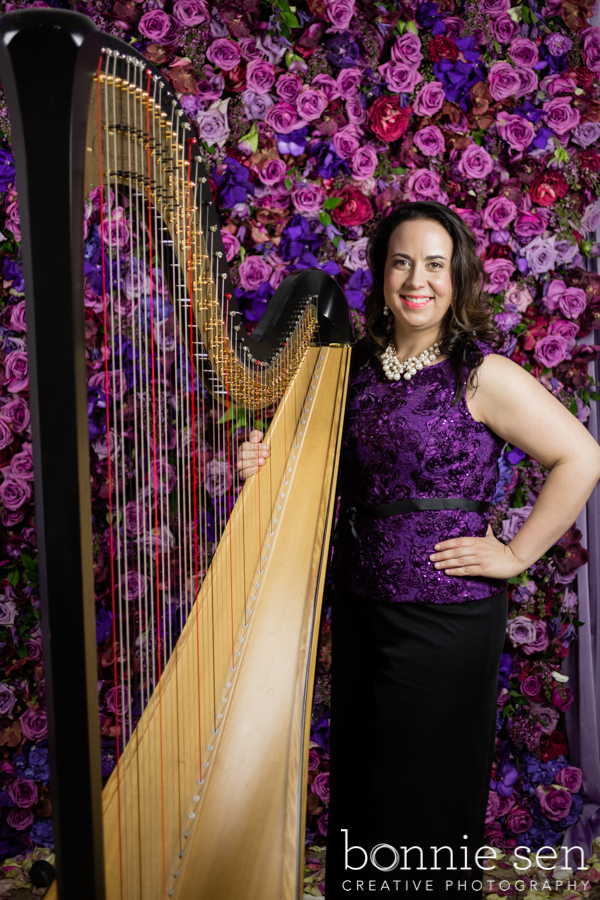 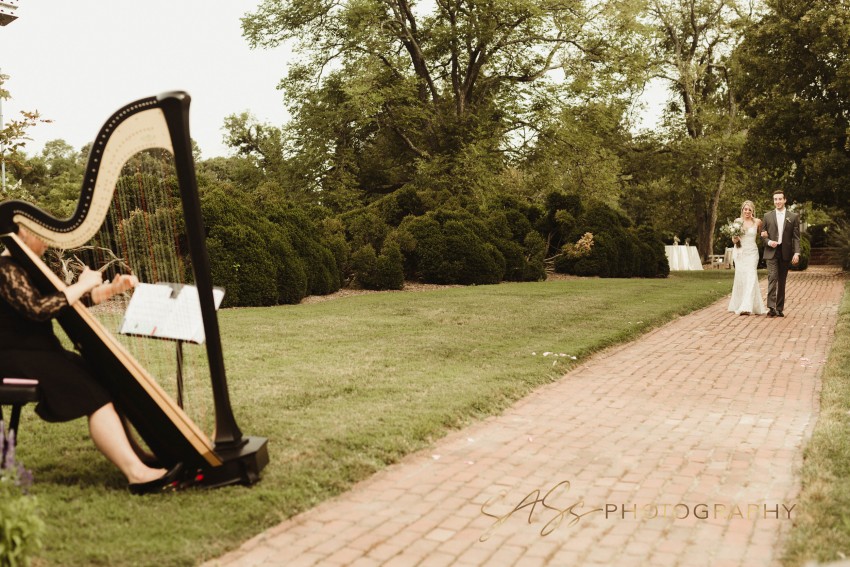 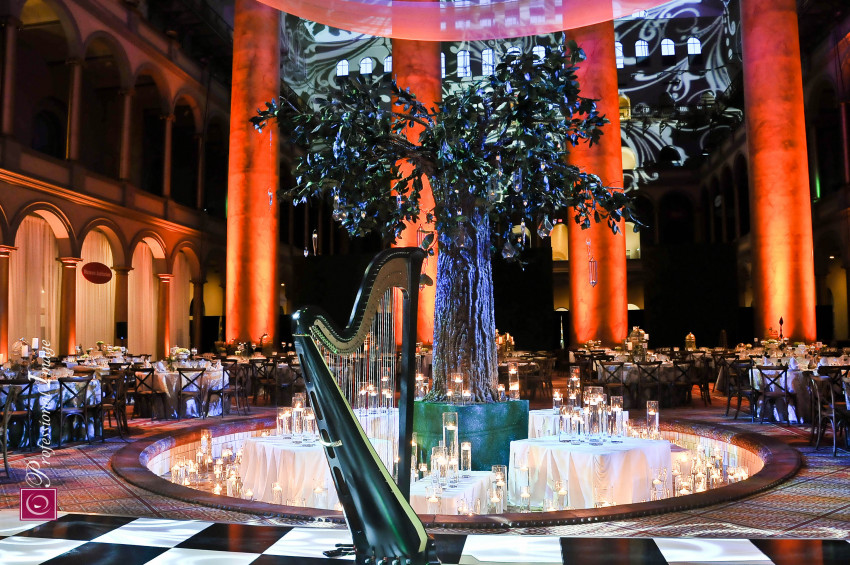 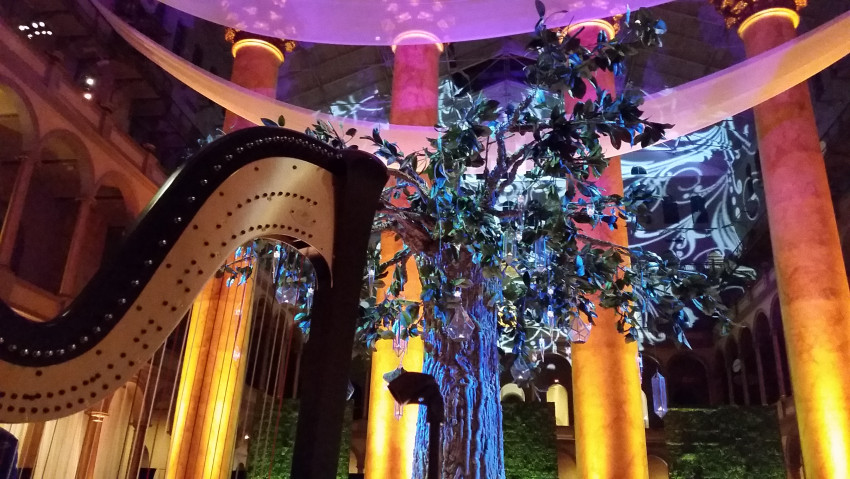 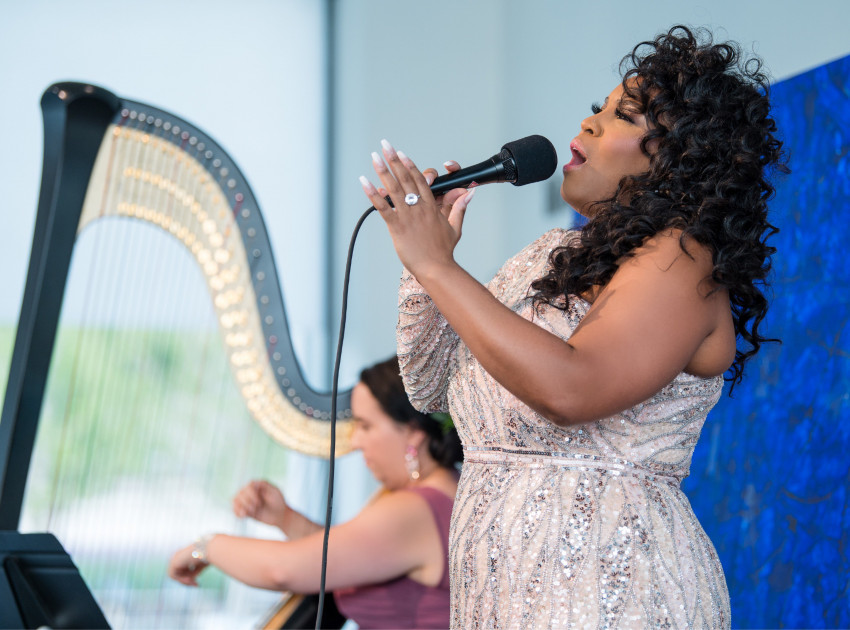 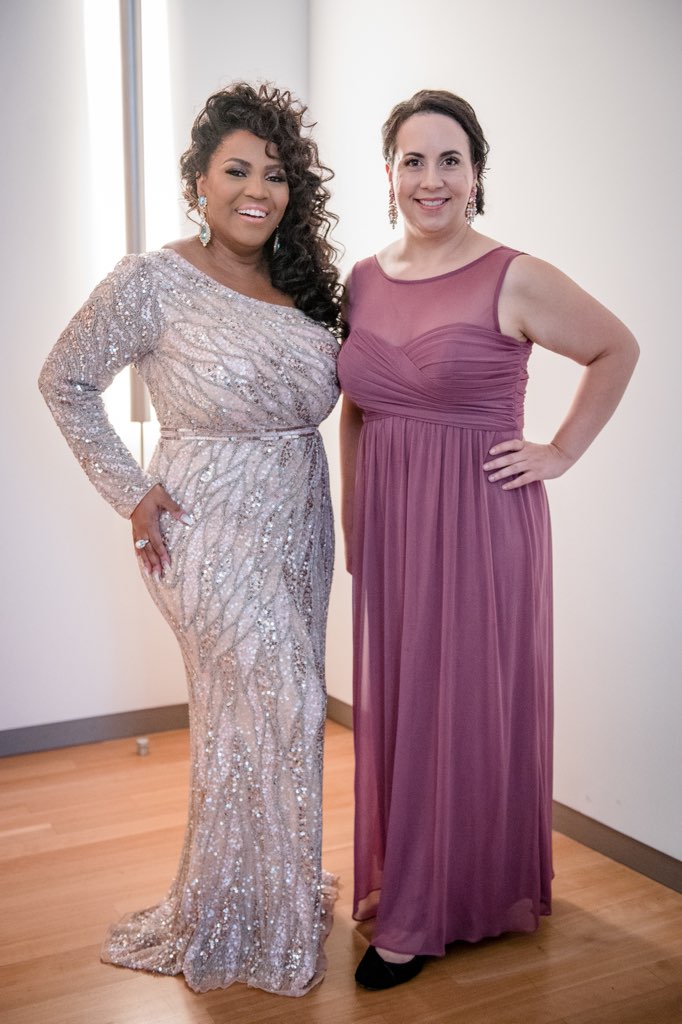 Nadia Pessoa is a professional harpist with over 25 years of experience providing elegant music for weddings, receptions & private events. One of Washington D.C.'s most in-demand harpists, she has performed for notable guests such as First Lady Michelle Obama, Vice Pres. Joe Biden, Meryl Streep, and more, and regularly performs at the Kennedy Center, National Gallery of Art, the U.S. Capitol and State Department, and the area's leading hotels.

Whether it's an intimate gathering or a large-scale event, Nadia can tailor a musical program to fit your needs. Instruments in addition to harp include violin, flute, and cello. Contact her today for a personalized quote based on your event details.

Beautiful music for our event

Nadia played for out Christmas house party with about 50 guests.
The music she chose was lovely, and added to the festive feeling of our event.She is
extremely professional and an excellent harpist.

Wonderful music. Arrived with time to spare! Very professional! Beautiful music. Would certainly use her again!

Thank you, Kathy! I was honored to be able to contribute to the memory of your mother. It was a beautiful service.

I highly recommend Nadia. When our original Harpist could not support us due to change of date, Nadia was a life saver. She did a wonderful job.

Thank you, Donald! It was great playing for everyone at ITCON again. Happy Holidays!

We were running so late on our wedding day. Nadia, from what we hear, played so beautifully. She executed our contemporary music choices perfectly and was so sweet and friendly to boot!! We are NEVER having another wedding, but if we did, we wouldn’t think twice about hiring Nadia again because she is just perfect!

The best harpist we ever heard. She is an expert in all types of music. She brought together the most harmonious ensemble including a cellist and flutist to my daughter’s graduation party. The guests really enjoyed the music and the ambience was very classy.

She makes the party!

This is the second party she has performed for me. I am so glad I found her!

Nadia was perfect for our reception! She played a variety of beautiful music, classical and religious and even some pop; our guests absolutely loved her. She kept a close eye on volume and was able to moderate as needed. She arrived early, and was very helpful in communicating with our coordinator, going far above and beyond our needs. I would highly, wholeheartedly recommend Nadia for your event, and can guarantee that we'll request her for any events in the area going forward!

Thank you for the fabulous review, Johannah! It was a pleasure working with you and performing for your guests at your VIP reception!

Professional ,courteous and a talented musician

Nadia was able to create the right atmosphere for my mother’s memorial while being very attentive to our specific needs. A true professional and a beautiful artist, she brought a soothing touch in our time of bereavement. Thank you Nadia

Thank you, Rodney! It was a pleasure to be able to pay tribute to your mother with music.

Just what I wanted. Everyone was impressed!

Thank you, Ellen! It was a pleasure meeting you, and performing for your guests at your lovely home.

My 40th Anniversary Surprise For My Husband

I'm sure there is not enough space here to sing all my praises of Nadia Pessoa as a harpist and as a person!
First of all just finding her on Gig Salad was unbelievably easy. What a great and user friendly service! Several harpist answered but Nadia was a perfect fit because of her Latin American background. As a surprise for my husband at our 40th Anniversary party on Sept 17th I wanted to surprise him with harp music playing South American tunes. Nadia said she had learned to play that music when she was a child and she would happily brush up on it. I also mentioned to her that our special song is a little- known song called Madrigal and asked if she knew it. She found it on U tube and sent it to me to see if it was the right one, which it was. She was unable to find the music for it so she learned the song by ear.(Amazing!)
My husband was so surprised and thrilled by her playing wonderful tunes that are close to our hearts (He is Colombian and we lived in Colombia for 22 years) but when she played Madrigal there were tears rolling down his face. She also played some Bach, which is my husband's favorite classical composer. My husband plays classical guitar and just that morning he was practicing a piece that Nadia (by coincidence) played beautifully on her harp. There were several music enthusiasts who asked for special requests and Nadia did her best to accommodate them as well. We are so thankful to Gig Salad and especially to Nadia for making our Anniversary celebration so amazingly memorable. Nadia and her harp were far beyond my expectations and I will recommend her to everyone. Thank you, Thank you, Thank you! We wish Nadia the very best in her career and personal goals!

Dear Elizabeth, thank you so much for the kind words, and for the fabulous review! It was a pleasure playing for you and your husband and your guests, and I was happy to be able to learn "Madrigal" for you. I appreciated having several music lovers in the audience, and how attentive everyone was! Thank you again, and congratulations on your 40th wedding anniversary!

Nadia was fabulous! She is definitely an angel from heaven when she plays.
We long to have her back for another event. She definitely sets the mood when your guest arrive to insure a memorable event. The Sharps

We wanted a harpist for our wedding and looked at all the wedding websites for recommendations and hit the jackpot with Nadia Pessoa. Nadia is first so sweet and the first time I talked with her over the phone and through email, she feels like a friend you've known forever. She was very professional and the whole process was smooth and easy. Nadia helped us select songs for the ceremony and even learned two new songs for us "Marry Me" and "Good Life." We had a very hot day, but Nadia showed up early and played until every last guest left. She was proactive and got in contact with our venue and other vendors we were working with. As much planning as there is with a wedding, this was the most stress free "task" on our list. I will recommend her to all of my engaged couples!

Above and beyond... A few weeks before our wedding, there was a really bad storm in our area and a lot of places lost power for a few days. Nadia told me she had lost power in her building and of course the elevator was out, but she is that dedicated that she lugged her Harp down a few flight of stairs to be able to play for a wedding. Now that is the kind of dedication I would want in a vendor!

Music To My Ears!

Nadia Pessoa performed at my wedding and I’m completely satisfied and impressed with her performance, knowledge of music, and professionalism. Music plays a major role in setting the tone for a ceremony and her performance created a calming and romantic atmosphere. It’s better than I would have imagined and my guests absolutely loved her performance.

Planning a wedding and working with some vendors can be difficult, but Nadia made the whole process stress-free and manageable. She clearly placed a high importance on meeting and satisfying my needs. I would gladly hire her again and encourage anyone looking for a harpist to book her.

Nadia Pessoa did a fabulous job at our wedding ceremony. She was quick to respond at emails and work with our music selection requests. Before we booked her, we did a hearing at her house. We wanted to here her live and discuss our music selection. When I heard her play, I almost cried (I was trying to keep my cool and not be a crybaby during our appointment with her...lol). I knew that she was the one I wanted for our ceremony, everyone said she did a wonderful job and how elegant it was to hear a harpist and flutist play at the ceremony. I can truly say I would recommend Nadia to anyone --- be it for a ceremony, cocktail, corporate or even a retirement party. She's talented and easy to work with.

With performances throughout the US, Canada, Europe, and Brazil, Nadia Pessoa holds degrees in Harp Performance from the prestigious harp program at Indiana University and the University of Michigan. Prior to moving to Washington, D.C., she served on the faculty of Louisiana State University and as interim principal harp in the Louisiana Philharmonic. Ms. Pessoa can be heard on the 4-time Grammy Award-winning recording of William Bolcom's "Songs of Innocence and Experience" from 2005 and is the recipient of awards from the National Society of Arts and Letters, the American Harp Society, the Fort Collins Symphony, and Downbeat Magazine.

As an orchestral harpist, she has performed in concert with jazz icons Diana Krall, Deedee Bridgewater, Regina Carter, and Randy Newman, opera stars Placido Domingo, Fredericka Von Stade, and Denyce Graves, and pop/rock artists including Wynonna Judd and the band Kansas. Ms. Pessoa has entertained audiences at renowned venues including the Kennedy Center, Carnegie Hall, Lincoln Center, the Academy of Music in Philadelphia, Miami's Biltmore Hotel, the US Capitol, State Department, and the White House.

She had the honor of being the featured harpist at Secretary of State Hillary Clinton's swearing-in ceremony and 2012's pre-State of the Union address reception, as well as fundraisers for the St. Albans School and Ford's Theatre.

Whether it's an intimate gathering or a large-scale event, Ms. Pessoa can provide elegant harp music that will leave a lasting impression on your guests. Available styles include classical, jazz ballads, folk, Irish, pop, Broadway, top 40, and contemporary. Contact her today for a personalized quote.

A flat, dry surface/ground for setting up the harp.

An entrance with limited stairs (a few are fine, but a ramp or elevator is greatly appreciated).

A plan for adequate cover from the elements, if needed, for outdoor events. 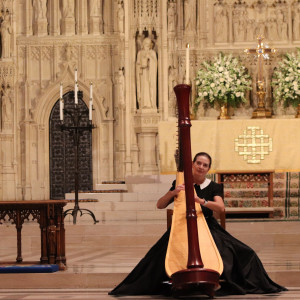 Alethea M. said “The harpist filled the room with heavenly sound and hope. She was fantastic and added a touch of class to our Appreciation Dinner. She arrived early and…” 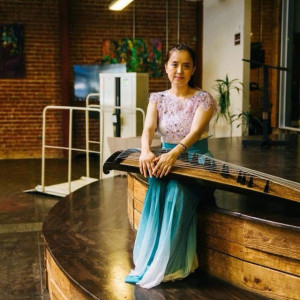 James L. said “Melody offers delightful experience that mixes the beauty of the traditional Guzheng sound with a fresh and modern twist of contemporary music. She is…” Christopher W. said “Lauren played beautifully during our wedding ceremony. She played wedding classic processional as well as more contemporary music, and even learned a…”

Meloni T. said “I absolutely loved everything. She was so graceful, professional and extremely talented.”