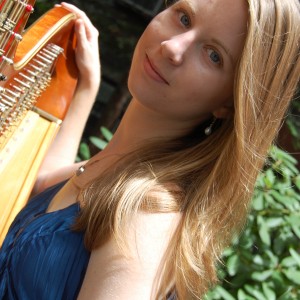 A professional freelance harpist for more than ten years, McCaffrey performs at weddings and special events throughout the New England Area. Her extensive repertoire and professional experience with planning weddings and events make her an ease to work with. She is also adept at arranging and is happy to work with you on special requests if they are not already in her repertoire. She is dedicated to making your event special and memorable.

Molly McCaffrey is a graduate of the Boston Conservatory, where she obtained her Master's of Music in Harp Performance.

Molly was amazing to work with. We discussed many options during our consultation and she was able to make helpful suggestions based on her experience. The bride was a harpist as well so was particular about who she chose to provide music for her wedding ceremony. Molly is an accomplished harpist, highly professional, and organized. We would recommend her to all.

Molly was so easy to work with and her performance was absolutely wonderful- her music added a truly enchanting experience for a fairytale wedding ! I would highly recommend her musical talents as she has such a vast repertoire.

Harpist was a fabulous addition

Molly played at our rehearsal dinner. She was amazing! She really made our night very special. Molly is very talented. We received many compliments from our guest. I would highly recommend her to anyone interested in having a harpist perform at their event! We would definitely hire her again. Thank you very much Molly. You played beautifully.

Molly McCaffrey is a graduate of the Boston Conservatory, where she obtained her Master's of Music in Harp Performance, under the direction of concert harpist, Ina Zdorovetchi. McCaffrey performs as a soloist, chamber and orchestral musician. She is a founding member of Trio Notturno, as well as the Apollonian Duo, comprised of violin and harp. She earned a Bachelor's in Music Performance from Rhode Island College, where she studied with Joan Harrison Ceo under the Helen Foreman Scholarship for the Performing Arts.

A recipient of the Shinn Study Abroad Fund, McCaffrey spent a semester abroad in 2010, studying at the Royal College of Music in London, England. While in London she studied under the direction of Welsh Harpist Ieuan Jones. She has performed with numerous Boston Conservatory ensembles, including their Opera and Musical Theater productions, New Music ensembles, and Orchestra. McCaffrey has also participated in the Brevard Music Institute Summer Festival in North Carolina. Currently, McCaffrey is the principal harpist with the New England Philharmonic, as well as an active freelance musician in Greater New England.

All equipment is provided.

Classical Music including Debussy, Bach, Renie, Pachelbel, and many more.