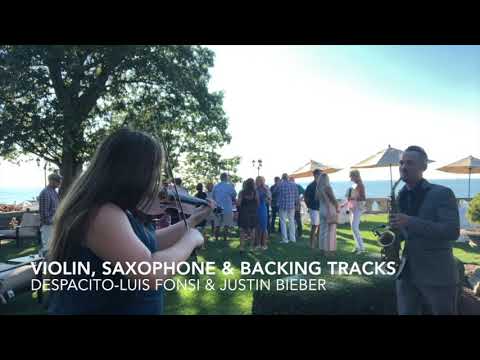 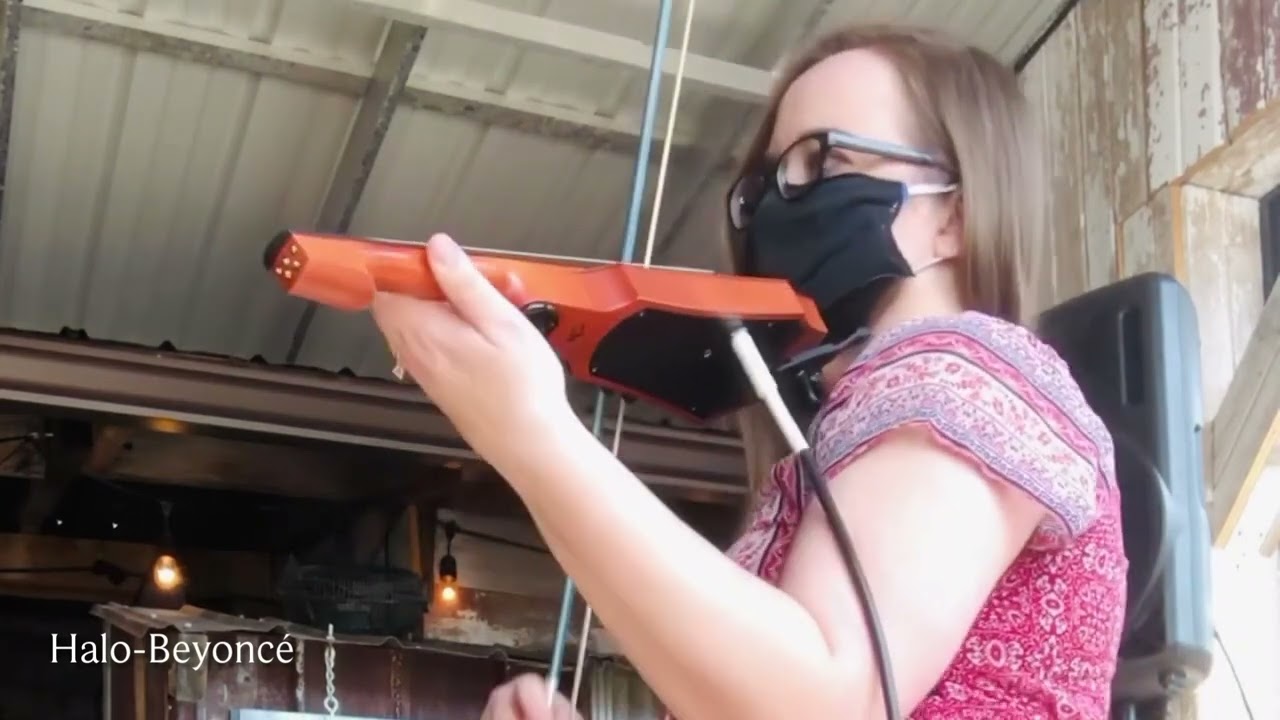 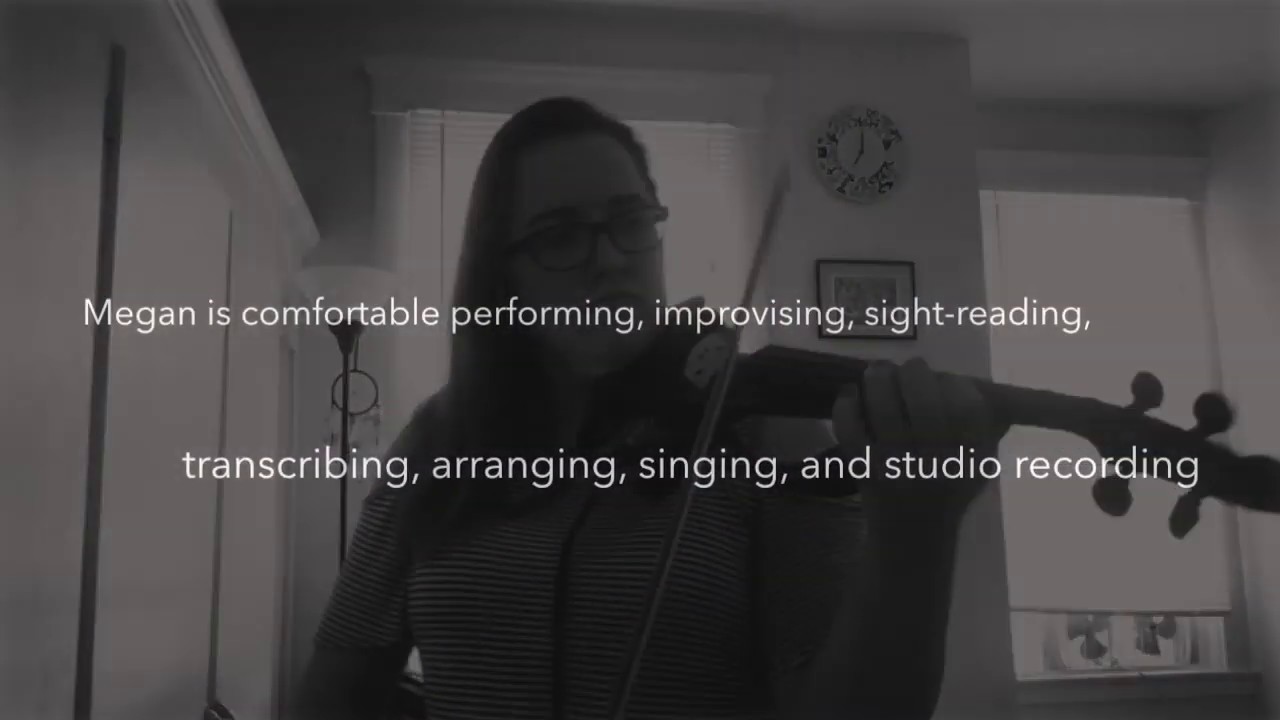 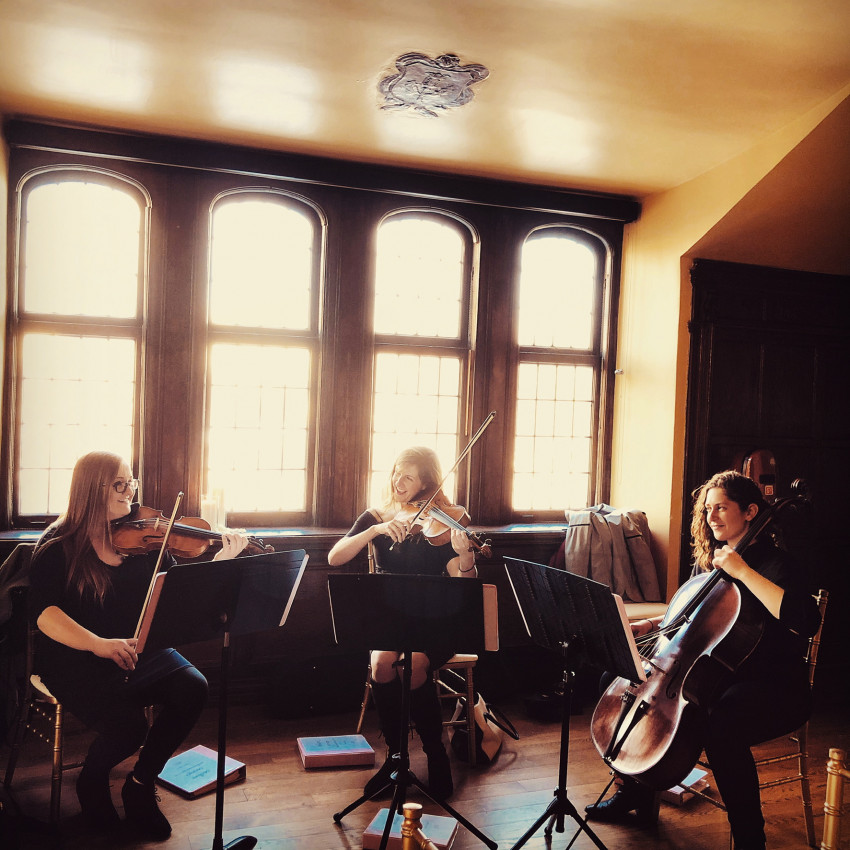 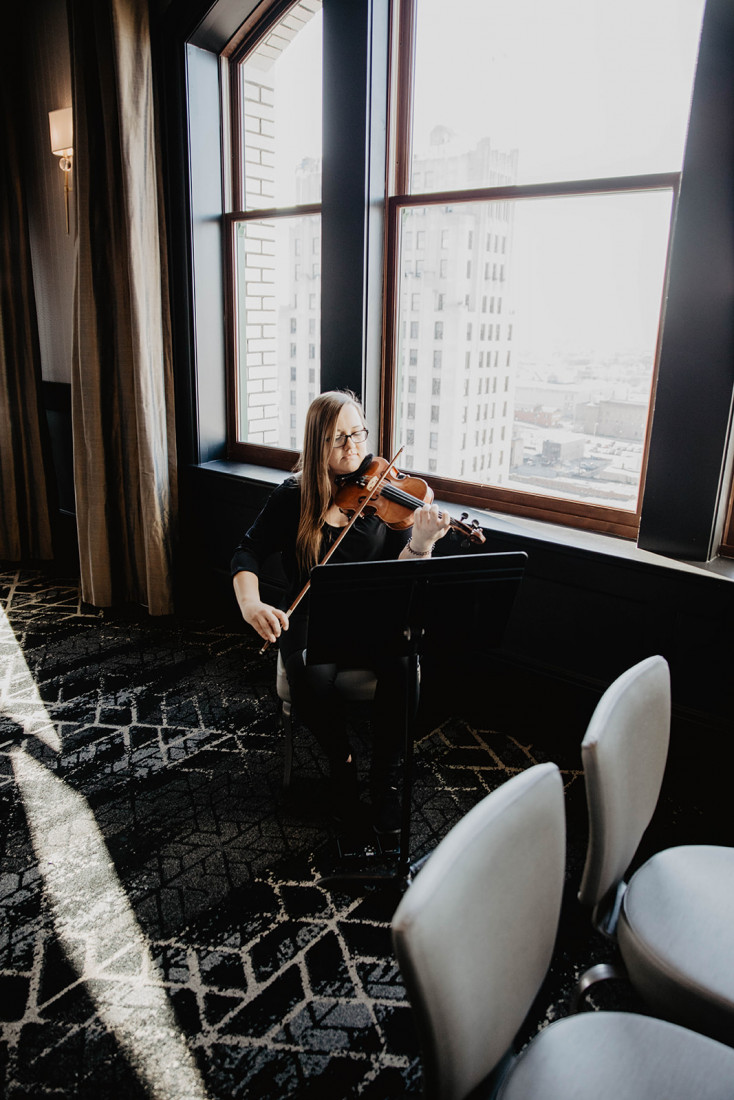 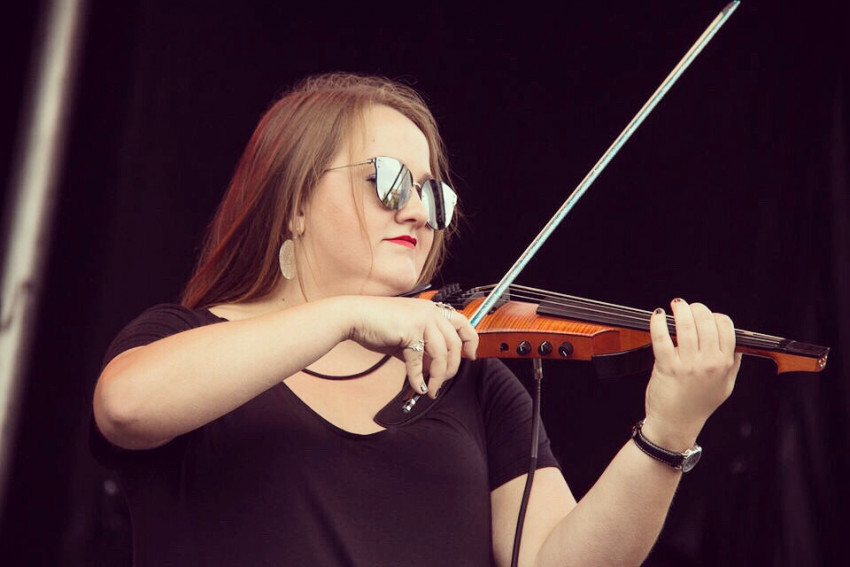 A few notable performances include playing with Michael Bublé, Josh Groban, the Trans Siberian Orchestra & the Playhouse Square Orchestra. Specializing in weddings, Megan has played over 200 ceremonies! She can play any song request you may have; either as an acoustic or electric violin soloist, with or without backing tracks, or as a duo, trio or quartet.

Played at a restaurant for the one year anniversary of my wife and me.

Megan is so incredibly talented and a joy to be around. We were very happy she was a part of our special day.

Megan was the highlight of our cocktail hour. More guests than I can count asked how I found her because they wanted to hire her in the future. She played all the perfect songs and was truly fantastic. Thank you again Megan!

Guests were happy and thought she was a special touch to our ceremony and cocktail hour. Her beautiful talent added an element of romance and such a personal touch to our special day

Our Guests Loved Her!

We received so many compliments on Megan and using her for our wedding ceremony. She was receptive and quick to respond through email. Most importantly, she was really good!! The Disney songs were a huge hit. Thanks so much for making my day more special ❤️

Megan did a fantastic job at my brothers wedding! Definitely recommend her!!

The violinist did a wonderful job! Music was beautiful!

Megan did a phenomenal job during our ceremony. The music and performance was tasteful and magical. She provided the perfect setting for our old fashioned wedding under the pines. I would recommend her to anyone. She had great communication and was willing to try anything to make our moment as special as can be. Thank you Megan for a wonderful ceremony. All of our guests were commenting on how wonderful you did. Would couldn't be more grateful that you were able to contribute to our moment that we will remember forever!
The Allwines

Megan played beautifully and folks complimented us on her playing the event. We were not a traditional wedding and she adapted well. Thanks Megan!
Knaufs

Megan, did a fantastic job at our wedding. We had several guests with upcoming events that asked for her information.

Megan is truly an amazing artist on the violin....we needed someone to perform an event 6 hours prior to it and she answered the call and was prompt, professional and a joy to hear play. I highly recommend her for any function you may have. Thank you again Megan

Megan was Superb !! Trully Beautiful Performance !! Can't Wait to have her Back !!

Megan was amazing! Exactly what we wanted for our special day

Time went so fast. Will definitely have Megan play at more parties in the future.

Megan and her talent were the most perfect addition to our wedding ceremony. She was responsive to all texts and emails. She was flexible and approachable with any questions and concerns I had. We had a pianist also at our ceremony and they took the time to come early and practice together before the ceremony. I would highly recommend Megan!

I have played with Megan on several gigs and she is a very great player. Would be a great addition to any event!

Music was wonderful, and added a great atmosphere to my daughters wedding, we were very pleased with Megan

We really enjoyed having Megan to play for our wedding. She sounded great and was flexible with last minute changes. Thanks for making this a memorable event!

Megan performed at our anniversary (on short notice) and played just what I wanted. It topped one of the best nights we and our friends have ever had.

A touch of elegance!

I was in need of some classical music for a wedding ceremony and cocktail hour at the reception. Megan was so sweet and accommodating, and she sounded wonderful! I would definitely recommend her for any wedding or event you're in need of a little elegant music for.

An audience member can expect a performance that is tailored to their needs and wants. Whatever you're looking for in a performance, Megan can accommodate and provide for you. If you'd like an hour of classical music to listen to at a sit down concert, or maybe some fiddle tunes in the background for the party you're throwing, or a quartet to play during your wedding ceremony, Megan will make it just as you envision!

Megan Sullivan, violin, is an active freelancer residing in Cleveland Ohio. Accomplished as both a classical and contemporary performer, she has played hundreds of concerts, weddings, and events with repertoire spanning classical to today’s hits! Megan is experienced in performing, improvising, sight-reading, transcribing, arranging, singing, and studio recording all in a professional setting. A few of her most notable performances include playing with Grammy award-winners Michael Bublé & Josh Groban, as well as the Trans Siberian Orchestra, and the Playhouse Square Orchestra.

Orchestrally, she has performed with The Firelands Symphony in Sandusky Ohio, the Playhouse Square Orchestra, was a member of the Ohio Light Opera pit, and has been a substitute with many orchestras such as the Mansfield Symphony (Ohio), the Kentucky Symphony, and more. Specializing in wedding music, Megan has also played over 200 ceremonies! She loves playing for weddings, and is able to play any special song request you have.

Equally passionate about contemporary music, she has played with many bands and ensembles. In recent years, she has performed onstage with Michael Bublé, Josh Groban, Wesley Bright & the Honeytones, and served as the vio-cellist with the Cleveland rock band, Seafair. She has also been seen with bands such as Remember Jones (pop/soul), The Dan Varner Band (country), The Rainbow Emergency (neo-soul), multiple wedding bands, and more. You may also have seen her as the violinist-in-residence at the beautiful Marble Room in downtown Cleveland. Megan also enjoys performing originals and covers using a loop pedal to layer vocals and violin, creating a unique contemporary-classical sound.

In 2014, Megan graduated from the Baldwin Wallace University Conservatory of Music where she was a student of Dr. Julian Ross as a violin-performance major. While at BW, she was grateful for many prestigious opportunities, such as performing in masterclasses with renowned artists such as Takako Masame and Stephen Rose of The Cleveland Orchestra, working directly with acclaimed composer Christopher Theofanidis, as well as playing alongside Cleveland Orchestra members in the BW Bach Chamber Orchestra, all four of her years at BW. During the 2013-2014 year, Megan served as the concertmaster of the Baldwin Wallace Symphony Orchestra.

Megan is originally from Cincinnati, where she studied with Ms. Dorothy Han and Mr. Gabe Pegis. She has attended various prestigious summer music festivals such as AIMS - the American Institute of Musical Studies (Graz, Austria), Interlochen Arts Camp, Brevard Music Center, and The Boston University Tanglewood Institute. In these settings, she worked one-on-one with many acclaimed teachers and performers.

Megan is always searching for new ways to expand her musical knowledge, experiences, and repertoire. Please don't hesitate to contact her with any questions!

This is a list of songs (updated March 2020) that Megan has played for previous weddings and other events as a soloist. If you are interested in either violin plus a backing track, a duet, trio or quartet, please contact Megan for those separate song lists. *notes for Megan's use*

Movie & Other Soundtracks
-And All That Jazz- from Chicago *Jazz fakebook*
-All I Ask of You- from Phantom of the Opera
-As Time Goes By- from Casablanca
-Assassins Creed IV: Black Flag theme
-The Avengers Theme
-Believe- from Polar Express
-Bella’s Theme- from Twilight
-Claudia’s Theme- from Unforgiven
-Concerning Hobbits- from Lord of the Rings
-Dawn- from Pride and Prejudice
-For the Love of a Princess- from Braveheart
-Game of Thrones theme
-Harry Potter themes *book*
-Hello, Dolly! theme *Jazz fakebook*
-I Believe I Can Fly- from Space Jam
-I Could Have Danced all Night- from My Fair Lady
-I Love Lucy theme *Jazz fakebook*
-Let It Go- from Frozen
-A Million Dream- from The Greatest Showman
-Moon River- from Breakfast at Tiffany’s
-My Heart Will Go On- from Titanic
-Non Dimenticar- from Anna *book*
-Now We are Free- from Gladiator
-Over the Rainbow- from The Wizard of Oz
-PM’s Love Theme- from Love Actually
-Pure Imagination- from Willy Wonka
-Put On a Happy Face- from Bye Bye Birdie
-The Rainbow Connection- from The Muppets
-Romeo & Juliet Love theme
-Seasons of Love- from Rent
-Skyfall- from James Bond (Adele)
-Somewhere In Time theme
-Speak Softly, Love (love theme)- from The Godfather
-Star Wars, Across The Stars (love theme)
-Super Mario World: main theme
-The Time of My Life- from Dirty Dancing
-Wedding Processional- from the Sound of Music