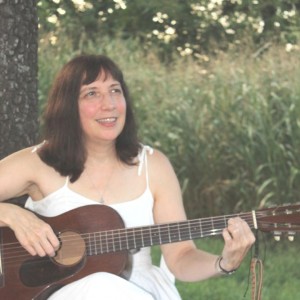 Julie Henigan, a native of the Missouri Ozarks, is known both for her unique command of the distinct but related genres of old-time American and traditional Irish music and for her superb original songs and instrumentals. A singer of great depth and versatility, she also plays accompaniments and solos on guitar, banjo, fiddle, and lap dulcimer. Her performances have been characterized as mesmerizing,” her vocals as “stunning,” and her instrumental work as “absolutely superior.” She has a CD on the Waterbug label ("American Stranger") and two books on open-tuned guitar with Mel Bay Publications. She is available for concerts, school programs, receptions, festivals, and other events.

The perfect entertainment for our St. Pat’s event!

Thank you, Mary--it was a pleasure. You were the perfect audience!

What can be expected from one of my performances varies according to the type of performance it is--concert, workshop, children's program, reception, etc. In all cases I can tailor my performance according to a client's needs or desires, for example, performing only old-time music at an old-time festival--or only Irish for any given event. I have often created performances to suit requests--for example, doing a program on Irish love-songs or a concert in which I illustrate the influence of traditional Irish, Scottish, and English music on the American tradition. I have also played strictly instrumental music at receptions, parties, etc., sometimes involving a specific instrument like the guitar. I also offer workshops or illustrated lectures on a variety of subjects: Civil War music, open-tuned guitar, Irish fiddling, and so on. And in both concert and bar settings I am happy to perform the more contemporary end of my repertoire when appropriate. Something that can always be expected at one of my performances is a professional quality of both musicianship and presentation. I like to interact with the audience--especially in children's programs, which feature a great deal of singalongs and other kinds of group participation. I give backgrounds to songs, tell jokes, and generally try to put my audience at ease and create as much intimacy as possible, even in a concert venue, since communication between performer and audience is what makes a performance special for both.

“I know Julie from years ago, when I was living in Donegal. She used to come to collect songs. She’s a fantastic Gaelic speaker. She’s like one of the locals. She’s like a reflection of the old music in America. I can see where the Irish and Scottish influences are in traditional American music. When she sings, she has the nuances of our older singers.”—Mairad N Mhaonaigh, South Bend Tribune, 10 April 2005.

Julie Henigan, whose performances have been characterized as “mesmerizing,” her vocals as “stunning,” and her instrumental work as “absolutely superior,” defies conventional musical categories. While primarily known for her unerring command of the distinct though related genres of traditional Irish and southern American music, she also performs a wide range of contemporary and original material; yet her unique style and impeccable musicianship lend her performances both seamless unity and striking originality.

A native of the Missouri Ozarks, an area noted for its rich musical traditions, Julie has long had a deep love of southern American music and has been fortunate enough to hear and/or play with some of best elder musicians in the region, including Almeda Riddle, Art Galbraith, Bob Holt, and Bill Graves. While living in North Carolina she collected ballads from Eunice Yeatts MacAlexander of Meadows of Dan, Virginia, and heard many of the finest traditional musicians of the region. Several lengthy stays in England and Ireland enhanced her innate feel for British and Irish music, and her work as a folklorist and scholar has added even greater depth to her understanding of these traditions.

A singer of remarkable depth and versatility, Julie performs songs both in English and Irish Gaelic, unaccompanied and accompanied on open-tuned guitar, five-string banjo, mountain dulcimer, and fiddle. Her song accompaniments are subtle and captivating, while her guitar, banjo, and fiddle instrumentals (many of them her own compositions) are at once accomplished and understated. Her “Farewell Song” has been recorded by Sharon Fountain and fellow Waterbug artist Kate MacCleod, and her rendition of the traditional song “Adieu, My Lovely Nancy” (on American Stranger) has inspired recordings and performances of the song by, among others, Altan, Jeff Davis, and Pete Coe.

Julie has performed solo at clubs, festivals, schools, dances, and concerts throughout the United States, Canada, the United Kingdom, and Ireland. She has also been a member of a number of Irish and old-time bands (including Missouri Girls, with Barbara Weathers and Kim Lansford); has shared the stage with a variety of singers and musicians, including Tom Paley, Bob Holt, Sara Grey, Dan Gellert, Magaret Bennett, and Bill Caddick; and has opened for such luminaries of Irish music as Altan, Paddy Glackin and Donal Lunny, Craobh Rua, and Mick Hanly. Her recording of a Donegal song, “Thos i dTeach an Trraimh,” appears on an anthology of songs called Sean-ns Cois Locha: Rogha Sean-ns Milwaukee (Sean-ns on a Lake: Selections from Sean-ns Milwaukee 2003-2005), released on the Cl Iar-Chonnachta label in 2006. Author of a popular Mel Bay book/CD on DADGAD fingerstyle guitar and a second book on DADGAD and DGDGCD tunings, Julie also has a highly lauded CD on the Waterbug label, entitled "American Stranger."

If amplification is necessary, I require at least two microphones (1 vocal and 1 instrument) and stands, preferably booms. If I am playing dulcimer at a given performance, I prefer to have two microphone placements, one sitting and one standing, so that I can move between one and the other and thus minimize time between songs. If I am playing dulcimer, I also need a chair; otherwise I perform standing. A table for my fiddle is also helpful. Of course, if the performance is amplified, I will also require someone to work the sound board.

I try to include as great a variety of numbers as possible, performing both songs and instrumentals. My set lists vary from performance to performance.

If amplification is needed, I will require a minimum of 2 microphones (1 vocal, 1 instrumental) and accompanying stands (preferably boom), a chair, and a table; 2 more microphones and stands may be required if I am to play the lap dulcimer.