Jason Weismann and the 'Q' 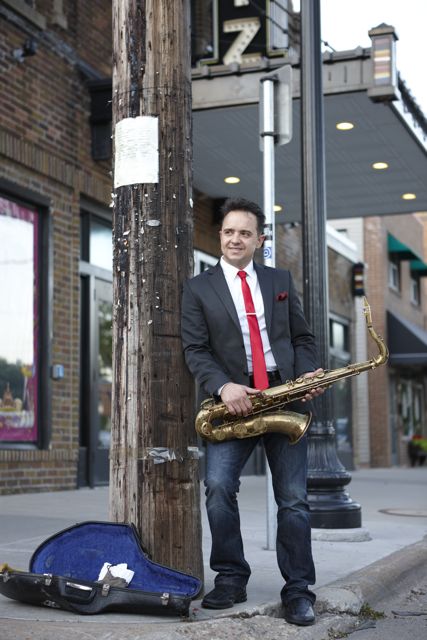 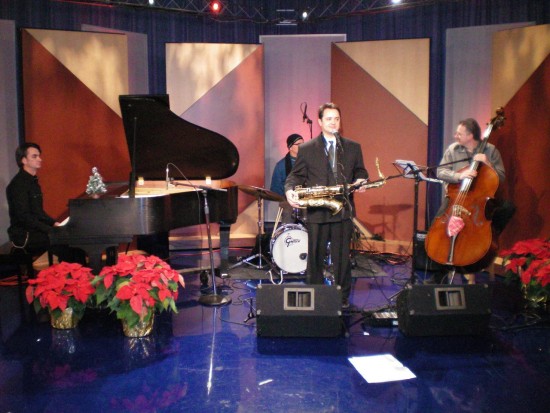 Here we were performing on the Holiday show for Showcase Minnesota 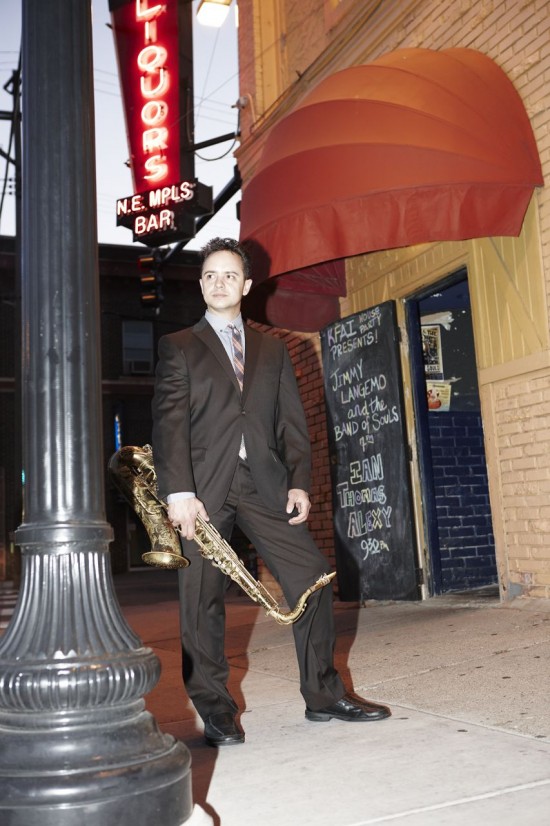 an image from our new upcoming album

Jason Weismann performs as a solo, duet, trio, but is most requested as a 'Q'uartet or a 'Q'uintet, hence the name. Jason is one of the few musicians that has the triple threat as a Sax player, Vocalist and Composer/Arranger. This allows all of his groups to sound like they have an added instrument. Instead of a traditional vocalist horn player, you get it all in one with fantastic arrangements to boot. So your duet sounds like a trio, your trio sounds like a quartet and you benefit with more sound for the same price... also no stale 'lead sheet performances' here. Every piece of music is meticulously created.

These personable musicians are consummate professionals to boot. On very short notice we were able to organize a performance that blew my jazz-lovin wife (and birthday girl). I would pay to see these guys play in a night club in a heartbeat. Not only did 2 of the guys sing, but Jason composes his own tunes too! It’s a real treat to chat with them between songs-they love what they do!

Musicians are top notch and your vocals were wonderful!!

Thanks for reaching out to us. I have been meaning to send you an e-mail but have been trying to catch up at work.

Thank you so much for your beautiful music at our wedding reception. All of your musicians are top notch (and as a former musician, I can speak with some authority) and your vocals were wonderful. We got so many good comments and compliments from our family and friends.

I also personally very much enjoyed working with you. You were totally committed to making our evening special for us and our guests.

Here is also a link to a nice picture of our reception on the Aria Facebook page.

WONDERFUL!! Their reputation is accurate!!

I thought you were wonderful at our wedding, and I got several compliments about Jason and the 'Q's music.

One of my cousins, Jeff (perhaps you met him) was especially impressed when he saw your name on the program — your reputation preceded you. He thought the last hour of music was particularly good. I was really happy with the ambience you set and the professional way everything was handled. I would love to write up a little something for your website, and I will send it to you with pictures when we get them back. I will be happy to pass on your info too. Thank you again!

I'll hire them for my 5&10 year Anniversary!

I had to thank you for making our Holiday party special. You were the perfect group to set the right mood. You must know every song ever written.. ha ha!
Well thankyou and thanks for giving dad and I such a memorable dance together. I think I’ll remember that moment for the rest of my life. Blessings, and hopefully we can have you back for our 5 or 10 year Anniversary!

Wow!! What an amazing group!!!

We had the pleasure of working with (Jason and the ‘Q’): Jason Weismann, Graydon Peterson, Tanner Taylor and Pete Hennig for the 40th Annual Lamberton Jazz Festival held in Lamberton, Minnesota. Jason was available during the planning process, prompt to reply to my questions and kept Graydon, Tanner and Pete apprised of their duties for the day. The festival day was AMAZING! All four men were very punctual and prepared for the day. Jason, Graydon, Tanner and Pete were easily able to relate to both junior and senior high jazz students. The students thoroughly enjoyed working with the clinicians both in their performances and during their master classes. All four clinicians were able to provide the students with new information and playing techniques. Jason, Graydon, Tanner and Pete performed an evening concert as part of the festival and the concert was SUPERB! They played both original pieces and cover tunes, ballads and up-tempo pieces and vocal and instrumental arrangements. The audience even got to join in! I am looking forward to working with Jason, Graydon, Tanner and Pete for future Lamberton Jazz Festivals and highly recommend them for a festival or clinic in any school!!!

Hope this helps and thanks again for a great festival! I mean every word of the testimonial!

Will definitely hire them again!!!

We had a company event in July 26, 2014. We were looking for both, background music and/or music people could dance to if they were so inclined. We hired Jason and the “Q”. They were perfect for our venue with the Jazz style of music that they played, and they sounded great! Aside from being entertaining and engaged with the audience, they are all awesome, talented musicians. I would highly recommend them, and would definitely hire them again.
Joan K.

Each show is created from a wealth of music compiled of the great standard songbook of Duke Ellington, Count Basie, Frank Sinatra, etc plus new artists on the scene such as Michael Buble/Harry Connick Jr./Nora Jones/Diana Krall, and reworkings of contemporary and non-stylistic artists such as Stevie Wonder, Hank Williams Sr. and Sting to name just a few.

We try to read the audience to offer just the right music at the right time. If people want to slow dance, or some high energy jump blues, we're paying attention.

We have also been doing large events for 15 years now, so you needn't worry that your wedding or event schedule will be on task.

Their sound is classic. The band appeals to the young and old with a sound that is often compared to Michael Buble and Harry Connick Jr. yet still harkens back to images of the Great Gatsby, Mad Men, and The Cotton Club. The band also sets a wonderful stage for Swing dancing.

They perform with vintage suits, and a classic 40's microphone so even the look is fun.

They are also very flexible with sound and budget. From a solo instrument expanding to a six piece group as the classic small group sound. The band can grow from duet to a 16 piece ensemble as your budget and needs allow.

- Selected as a featured artist at the Uptown Art Fair 2013
- One of the headliners at Orchestra Hall's Summerfest in 2012.
- Featured outside Ted Mann as a pre-concert for their concert series. 2012
- Featured artist at the Twin Cities Jazz fest as well as leading the national feature 'Deodato's' Horn Section.
- One of the 4 composers featured at Orchestra hall in 2011. Composed, arranged, sang and played sax on all of my own music for this performance.
- Former winner of the Minnesota's Music Award for Best instrumental Group.
- Inducted into the Rock and Country Hall of fame 2009
- The Jaztronauts - voted 'Best of the Best' by Minneapolis/St Paul Magazine

Typically we include a sound setup in our price, but if sound is hosted as part of the overall production we would need 2 d/i boxes, 5 drum microphones and a microphone for the sax and vocalist.
The bands pricing is based on a 4 hour performance. An extra cocktail hour, or processional music is an additional charge.

**We typically ask that the band be fed when meals are available as showing up early to setup sound through the end of the night leaves the musicians missing dinner.

All Blues
At Last
All of me
All the things you are
A-Train
Autumn Leaves
Avalon
Beginning to see the Light
Blues don’t care who’s got em
Besame Mucho
Beyond the Sea
Big Leg Mama
Black Orpheus - A day in the life of a fool
Bewitched
Blue Bossa
Body and Soul
But not for me
Bye bye blackbird
Canadian Sunset
Caravan
Ces’t Magnifique
Darn that Dream
Days of wine and Roses
Do nothin till you hear from me
Don’t get around Much anymore
Dream
Easy to Love
Every Breath you take - sting
Fever
Fly me to the moon
Frim fram sauce
Fragile - Sting
Gee baby ain’t I good to you
Gettin Kinda Chilly
Ghost of a chance
Girl from Ipanema
God Bless the Child
Green Dolphin street
Hallelujah I love her so
Heart and soul
Here’s that rainy Day
Home - Michael Buble
Honeysuckle Rose
How about you?
How deep is the Ocean
How high the moon
How insensitive
I can’t give you anything but Love
I could write a book
I get a kick out of you
I remember you
If I had you
In a mellow tone
Is you is or is you aint my baby
It don’t mean a thing
It had to be you
I’ve got a way with women
I wanna be like you
Jack you just ain’t booted
Java Jive
Jump and Jive (then you wail) or “Gonna hail”
Joy spring
Just a Gigolo
Just friends
Lime house blues
Look for the silver lining
L.O.V.E.
Makin’ Whoopee
Do you know what it means to Miss New Orleans
Misty
Mood indigo
More
Most of all
More than you know
My foolish heart
My funny valentine
My one and only love
My romance
The Nearness of you
Nice work if you can get it
Night and Day
On the street where you live
On the sunny side of the street
One note samba
Our love is here to stay
paper moon
Poinciana
Rubber Ducky
Satin Doll
Sheik of araby
Smile
I feel so Smoochie
I wanna be like you - Jungle book
Someone to watch over me
Spiderman
Stella by starlight
Sunny - Stevie Wonder
Sweet Abilene
There is no greater love
there will never be another you
Wave
The way you look tonight
Them there eyes
Unforgettable
We’ll be together again
What a wonderful world
What is this thing called love
When the Saints go marching in - New orleans
When I fall in love
When you’re smiling
You and I - Stevie Wonder
......And many many more!!!

Space cleared of any hazards

Musicians will take breaks as needed

If for any reason beyond the parties’ control, such as strikes, war, riots, accidents, epidemics, or acts of God, Purchaser shall be prevented from utilizing Artist’s services hereunder on scheduled date, then the parties shall agree to use best efforts t

1/3 of the entire cost will be paid up front and is non-refundable as a retainer on the event date.

Special requests need to be discussed before the event and changes to the schedule, contract, or performance location would be dependant upon artists schedule flexibility and and agreed upon up charge.