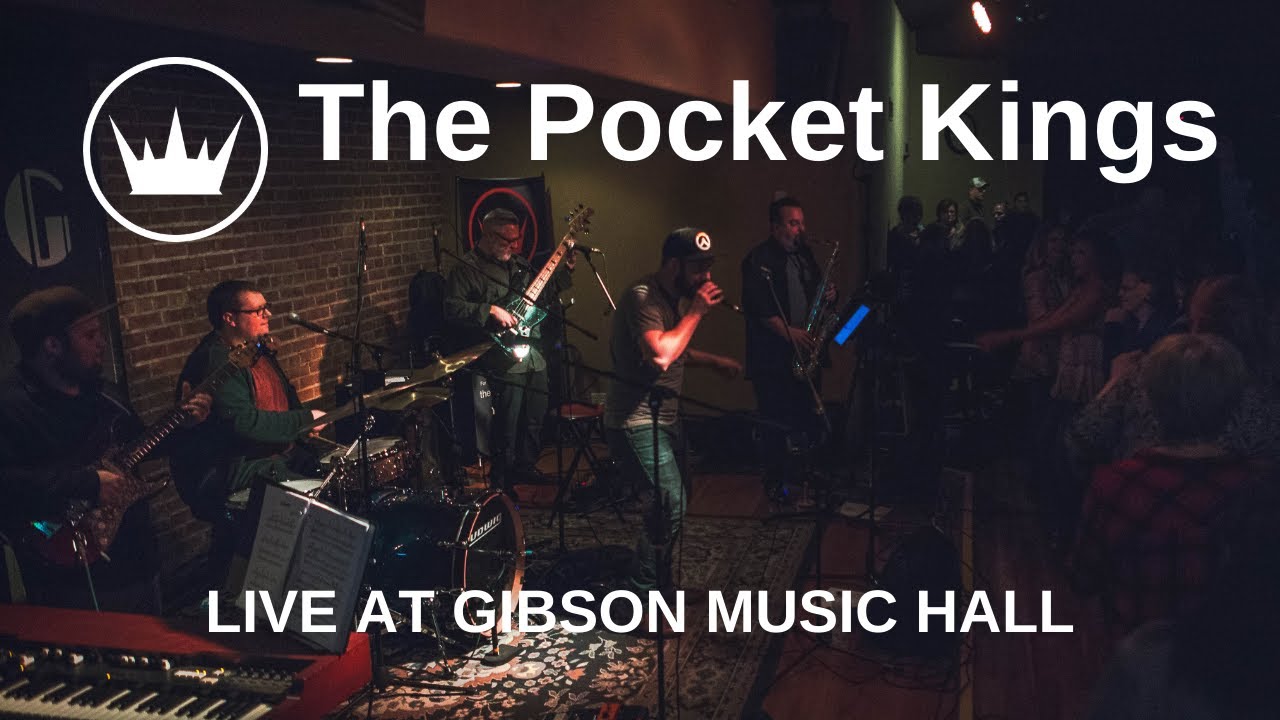 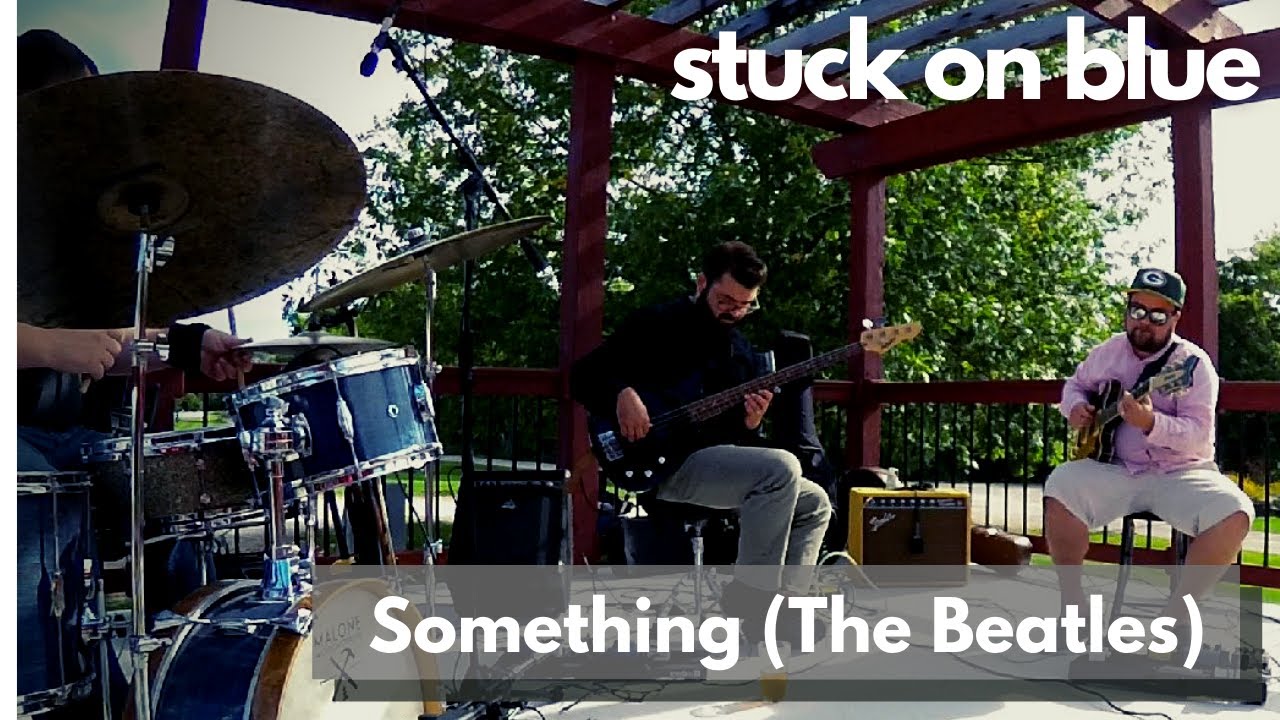 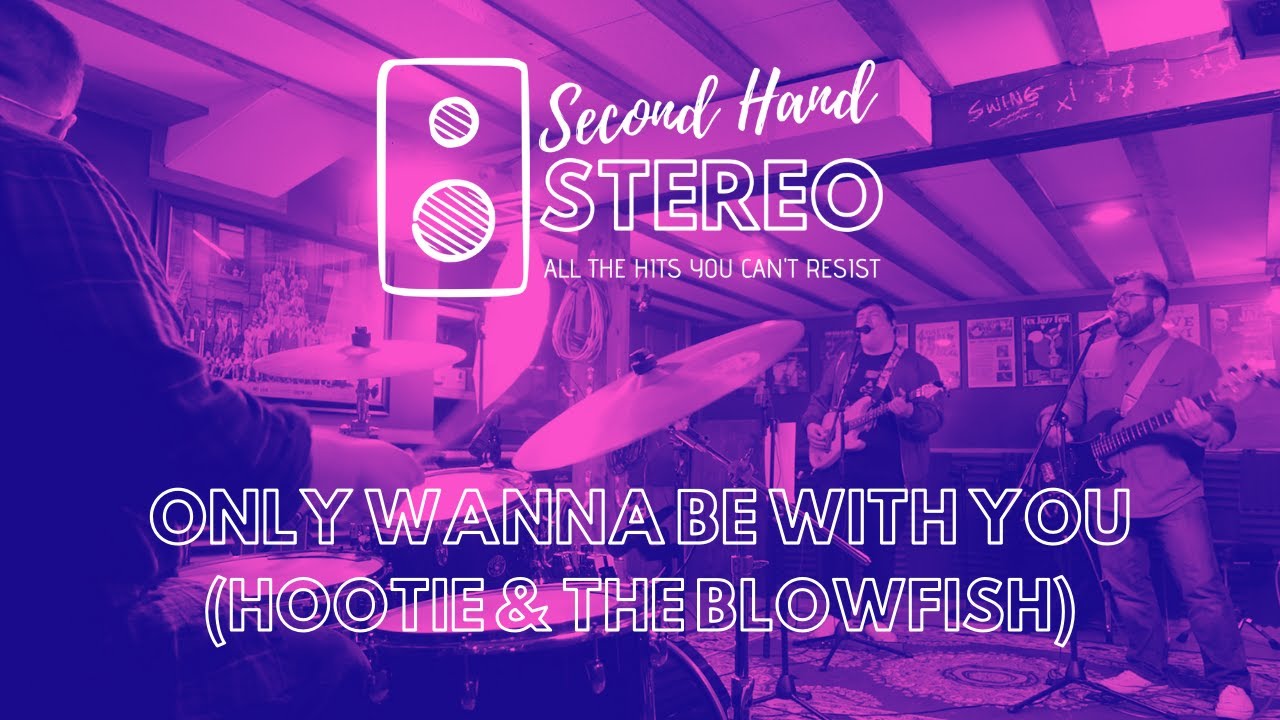 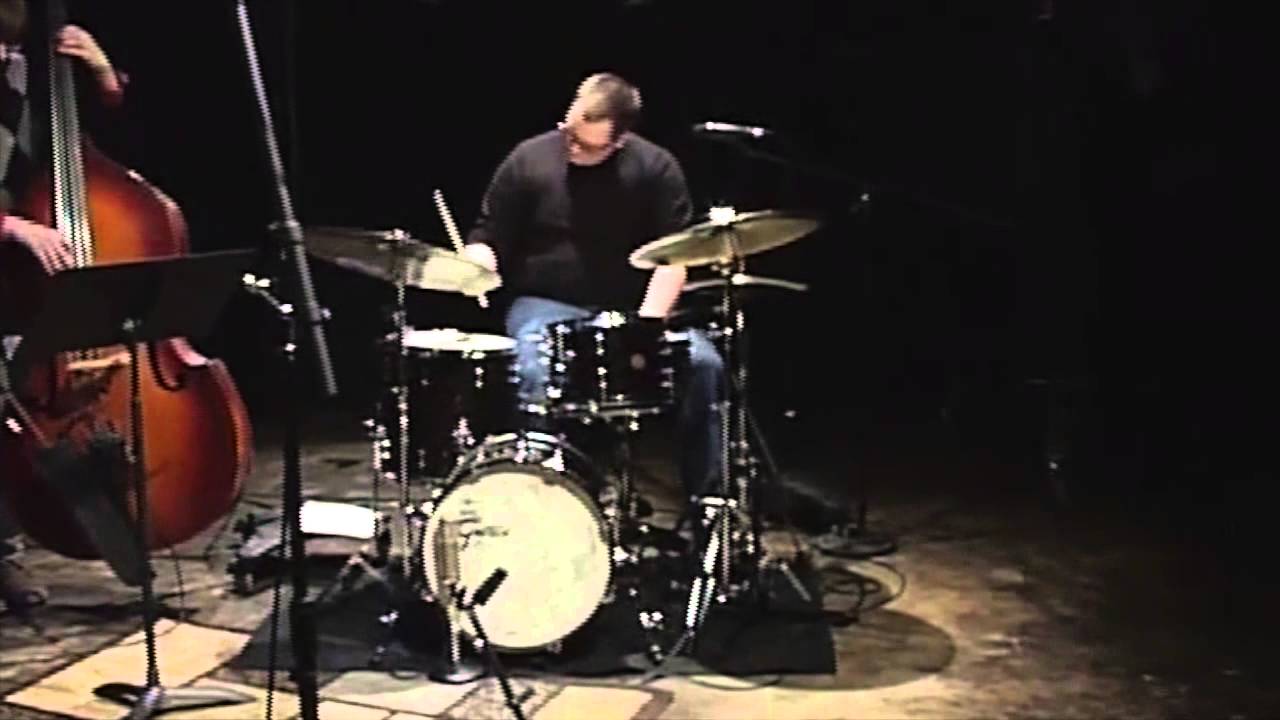 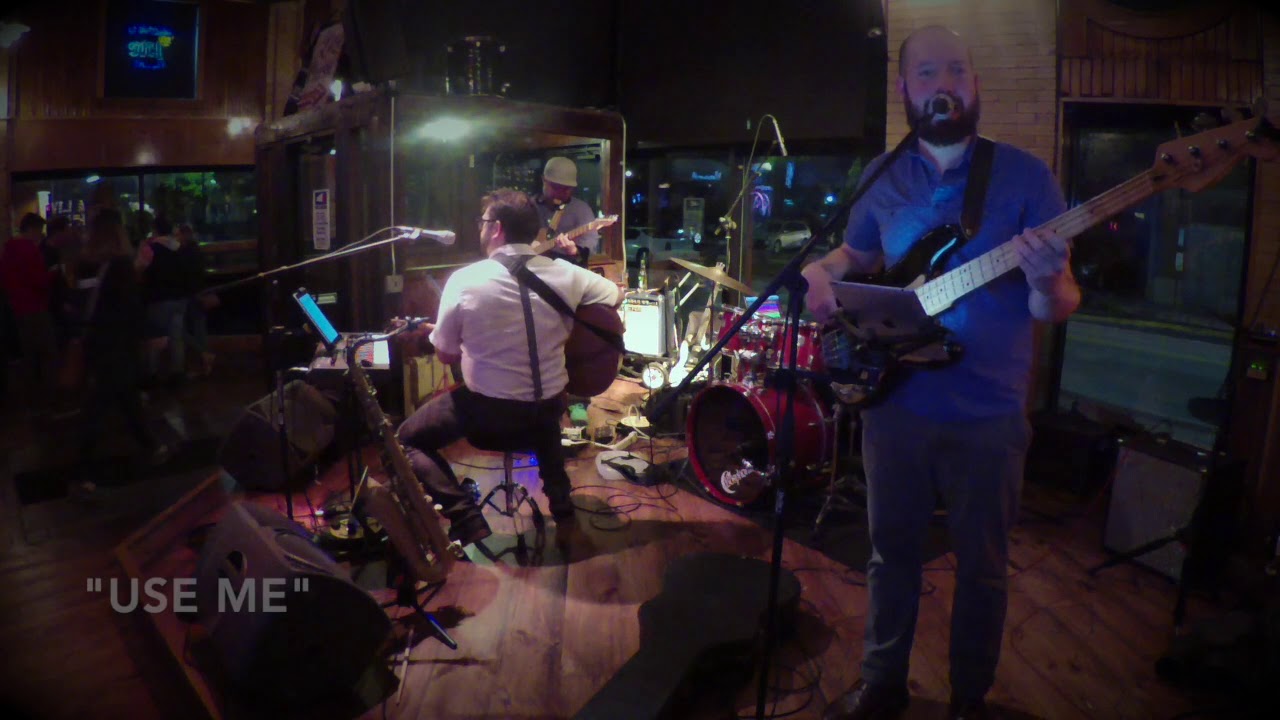 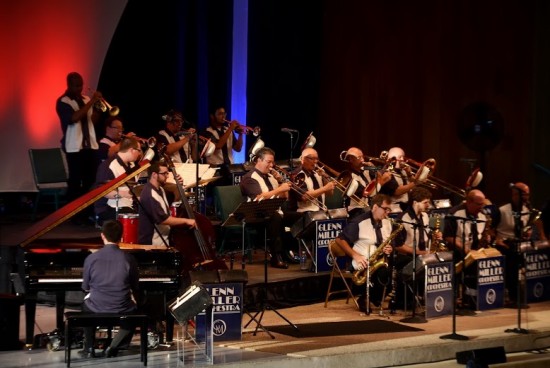 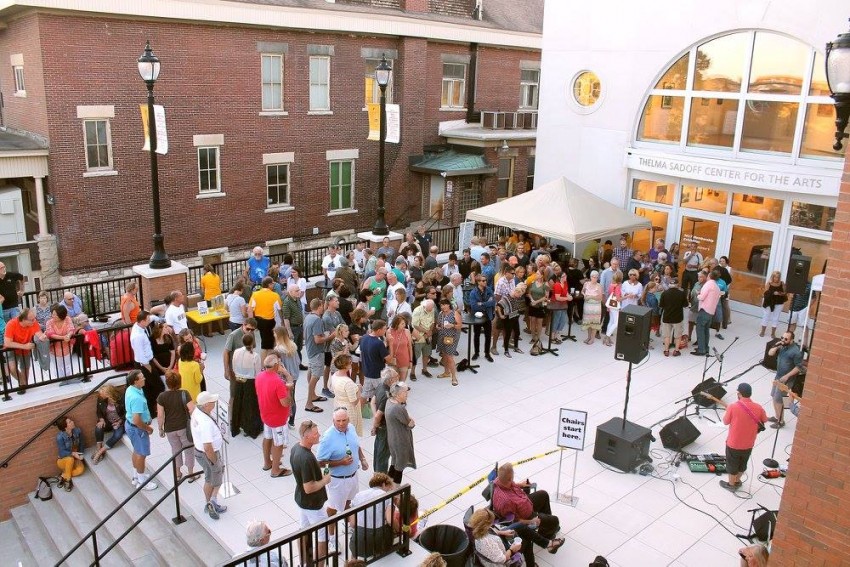 The Pocket Kings @ THELMA Sadoff Center For The Arts 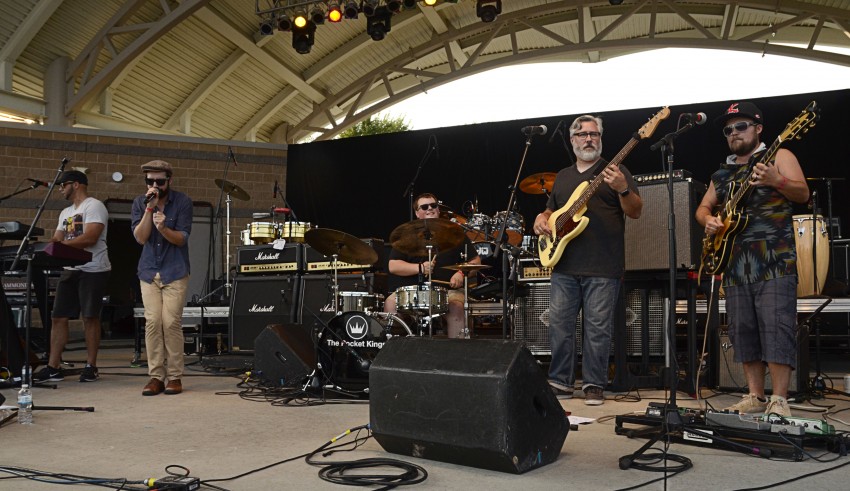 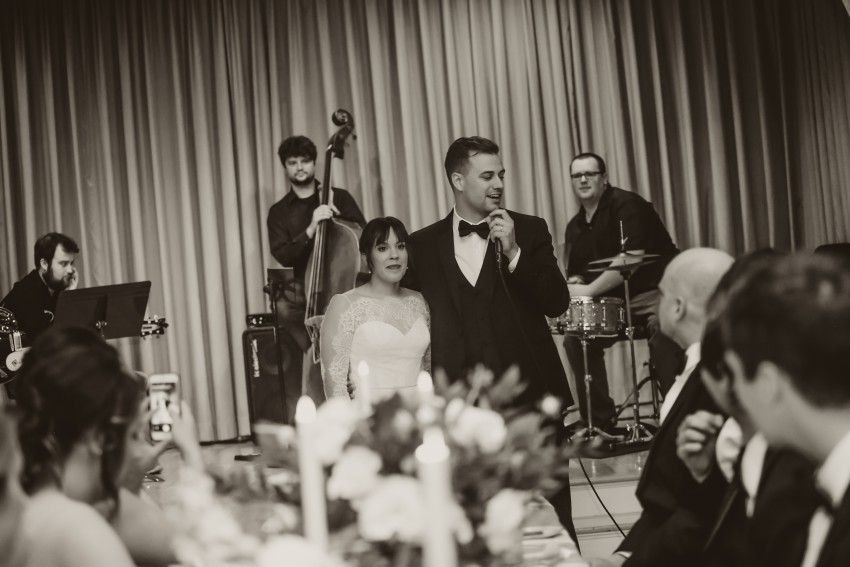 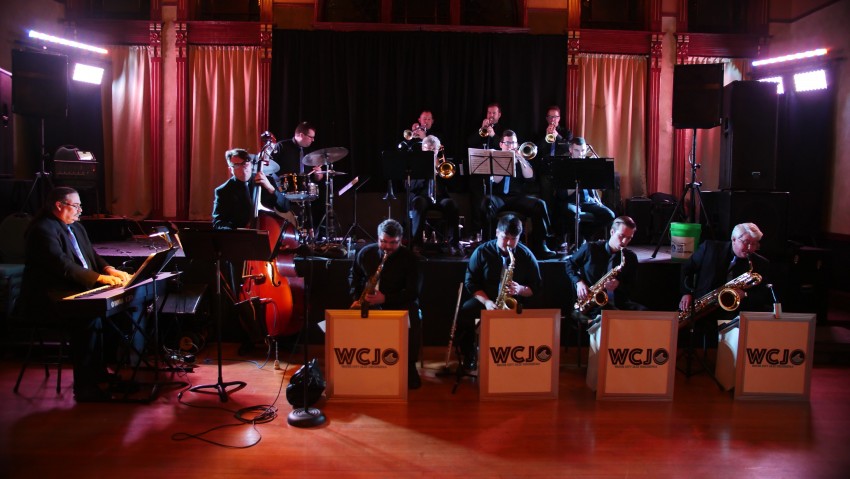 Mike Malone offers a wide variety of small group jazz for receptions including trios, quartets and quintets along with a full 16 piece jazz orchestra available for dances. Malone has toured internationally with the Glenn Miller Orchestra, Ray Brown Jr., and Five By Design. After completing work in Europe, he has returned back to the Fox Valley area to perform with the amazing musicians based locally. Additionally, Malone, also works with pop/variety bands great for weddings!

In addition to groups he performs in, Mike also represents a large array of bands ranging from solo acts, jazz groups, and large reception bands.

What a great event!

We loved the entertainment at our company party. It was a great surprise to the team! Mike and the rest of the band was awesome!

Thanks Jeff, we had a blast playing for you and hope to work with you again! Nice dance moves by the way...

We unfortunately didn’t get a chance to work with Mike Malone as COVID caused us to cancel our wedding reception, but we found Mike very professional and adaptable to the times. Would definitely recommend.

Thanks for the kind words! Maybe one day we’ll get to work together!

Thanks Mike, it was awesome to work with you, sounds like we may get another chance soon!

Professional & Easy to Work With

We hired Malone Music for a corporate holiday event. Mike was very easy to work with, contract negotiations went smoothly and he was accommodating to our music selection. The guests loved the quality of the music and as event planners we were very pleased with their professionalism. I look forward to working with Mike and his trio again in the future.

Thanks for the kind words! We had a blast and hope to work for you again!

Mike Malone and his Jazz Trio played music for my wedding. They played during the cocktail hour and dinner portions of my wedding and were simply wonderful. They created such a nice atmosphere and were the perfect way to make the day extra special. They even played a rendition of “A Whole New World” from Aladdin and it made my day. They were professional, easy to work with, and very accommodating. They are a great choice for any sort of function or event. Mike and his colleagues are truly talented musicians.

Best Part of the Wedding

We booked Mike Malone's Band for our wedding and to say they were flawless would be an understatement. They were professional, responsive to requests, Flexible with timelines and got everyone off their feet. People wont stop complimenting me on the band. I cannot thank the band enough for being the life of the party.

Mike and his band were professional, played great jazz music for our wedding reception, and were super flexible. In addition, they provided sound system and mics for our ceremony, ran the sound system and allowed our friends to use their equipment to share their talents with us at our wedding. Altogether a pleasure to have them - I just wish the wedding reception didn't have to end so we could have heard more of their music!

Good Music for our 25th Anniversary

Malone Music provided light jazz during the dinner hour; and followed by music for dancing after the meal. They were versatile with 50's type slow music, late 50's and 60's style rock, and some polka's thrown in. Malone Music met our expectations.

This group provided just the right atmosphere for our party. Good volume level and quality music the entire night. They arrived early and were all set to go when the party started. Easy to work with and accommodating. No hand-holding needed.

MIke Malone provided jazz musicians at the grand opening of our senor living community. He was easy to work with, very professional and the music was a great fit for our event. The musicians were skilled and sounded great. Lots of positive comments from our guests. I would not hesitate to recommend Mike Malone.

We recently used Malone music for our holiday party. They were wonderful. They came on time, were professional and the music was beautiful.

Great band, Great Players, Great music selection. If you want a classy elegant reception and are including a live band, contact Mike Malone and he will take care of you! We had a full big band but he can accommodate any budget or size requests with ease.

I provide a multitude of ensembles, many of which I perform in. I additionally arrange musicians and groups that I do not directly perform with, but manage or coordinate with for special events. I love to learn as much about your event as I can and then piece together the perfect ensemble for whatever is needed. I'm happy to communicate as much or as little as needed to make an event go smoothly!

Mike Malone is a skilled percussionist originally from Oshkosh, Wisconsin. He graduated cum laude from the University of Wisconsin – Eau Claire where he studied music. During his time in Eau Claire, he performed with the Grammy nominated and Downbeat award winning, Jazz Ensemble I. As a part of multiple projects, Malone has worked with a long list of prominent and established artists from the Twin Cities, Chippewa Valley, and Fox Valley. With these groups he has performed across the Midwest and has been a featured performer in the Twin Cities Jazz Society’s Young Artists Series.
In 2013, Malone was invited to tour internationally with the Glenn Miller Orchestra performing for crowds ranging from hundreds to thousands nightly. Malone has continued touring with other groups like vocal jazz quintet, Five By Design and Ray Brown Jr. (son of Ella Fitzgerald and Ray Brown). Malone has also performed with Geoff Keezer, John Pattitucci, Randy Brecker, Byron Stipling, Wycliffe Gordon, Andy Martin, Eric Marienthal, among other musicians.
Currently Malone resides in Northeastern Wisconsin where he is an active freelance musician, teacher, composer and clinician. He manages a private teaching studio and leads his own jazz groups in addition to working with area groups. His compositions are featured on his debut album, “Overalls & Airplanes” which was released in April of 2013. He can also be heard on a number of albums including releases on Dazzle Records (Denver, CO) and Tantara Productions (Chicago, IL). Malone is a performing artist for Bosphorus Cymbals.

I try to keep everything as minimal as possible. As long as there's power we can make it work! I never add in fees for travel, lodging, food, sound/lights, etc. Everything is always included with the quoted price.

All requests are considered and usually fulfilled with sufficient time notice (more than a week).