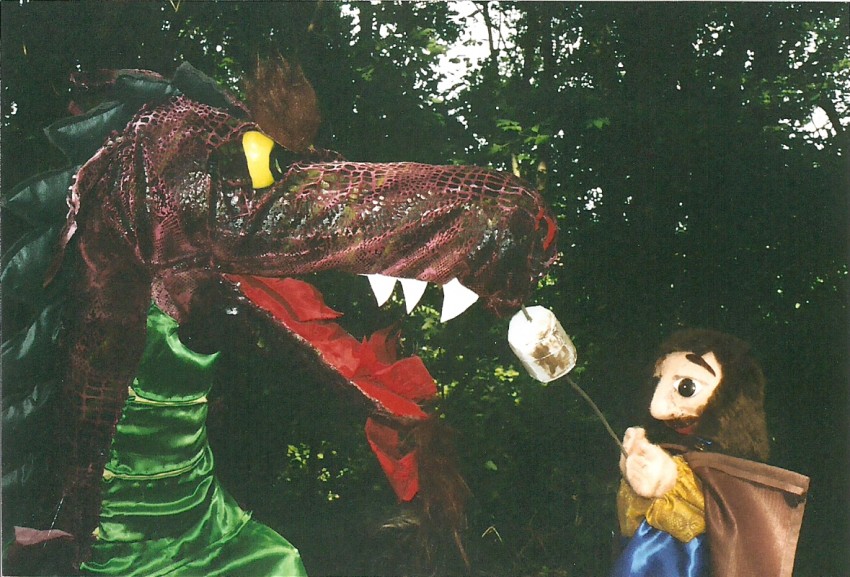 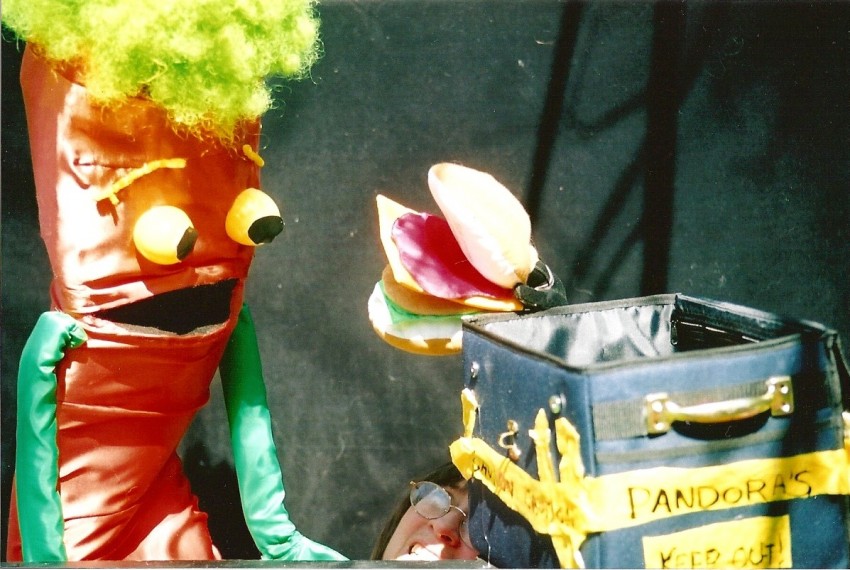 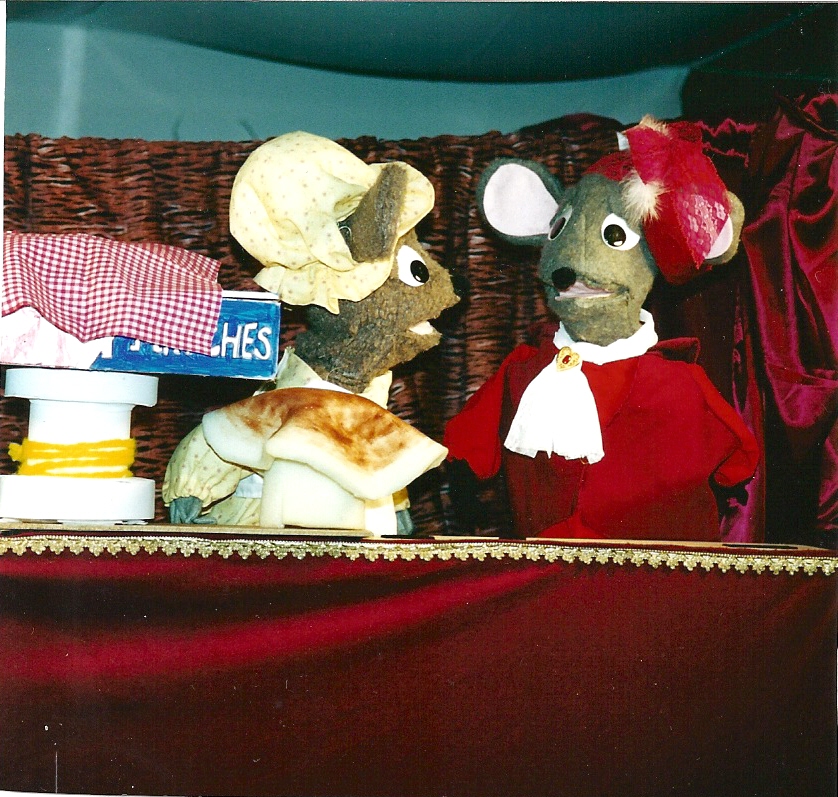 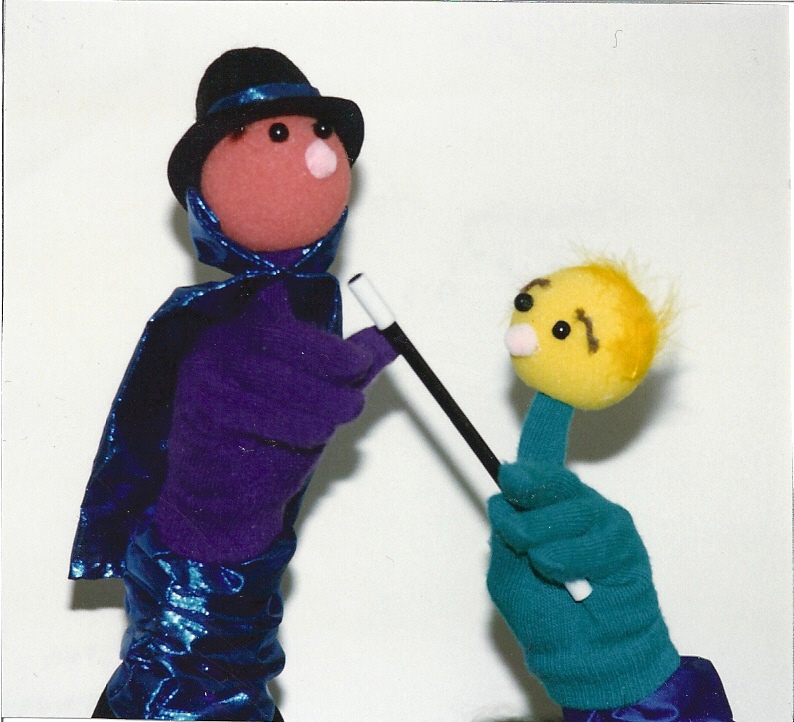 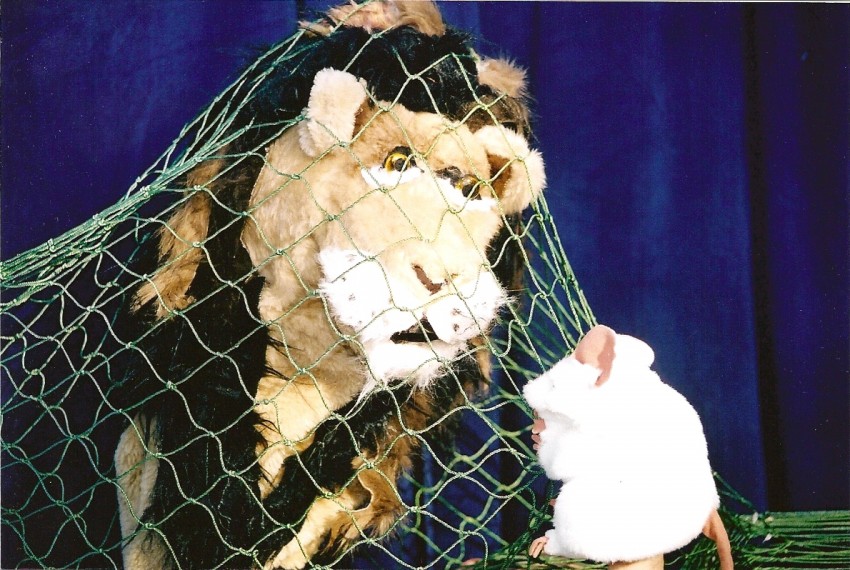 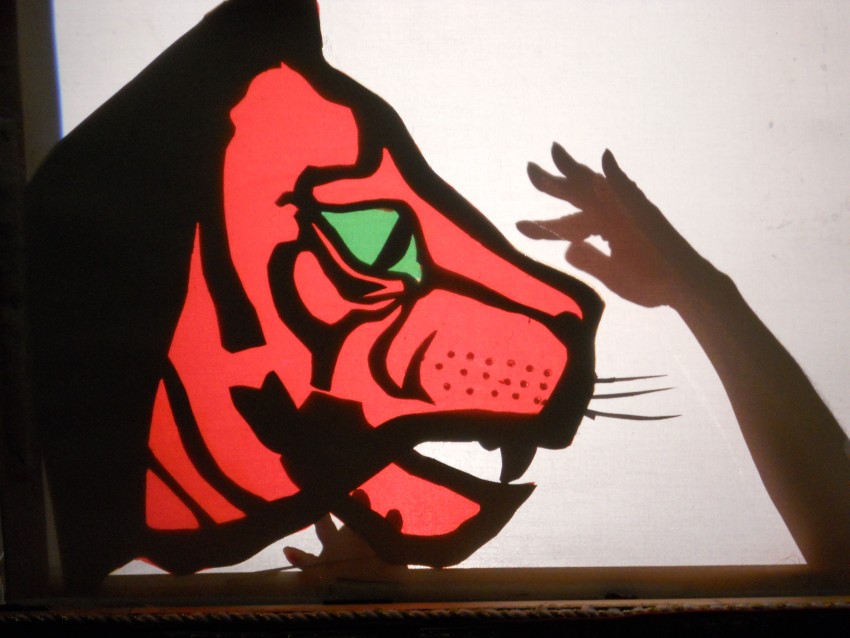 From Out of Shadows 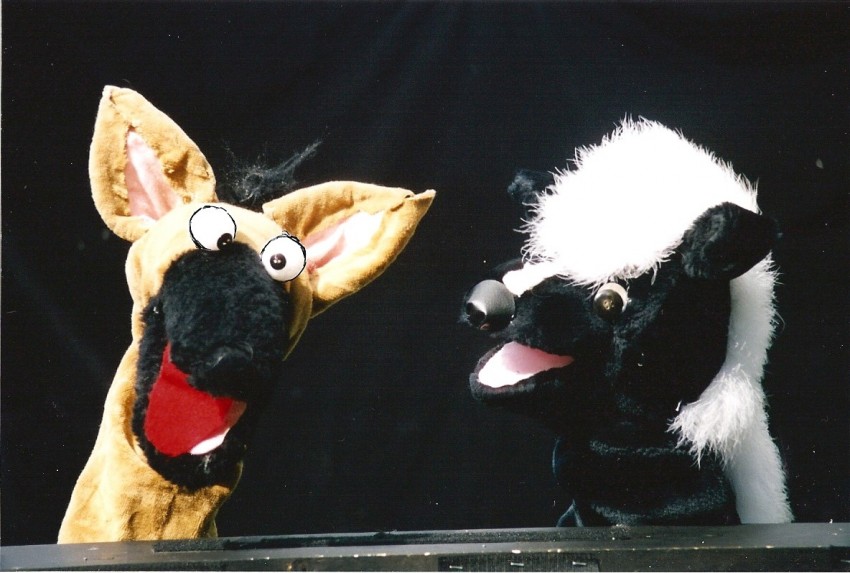 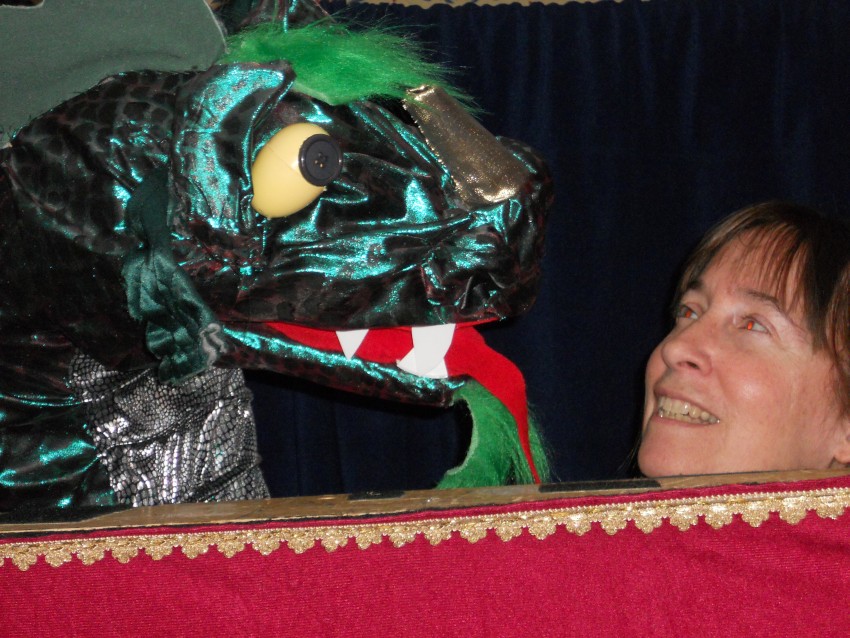 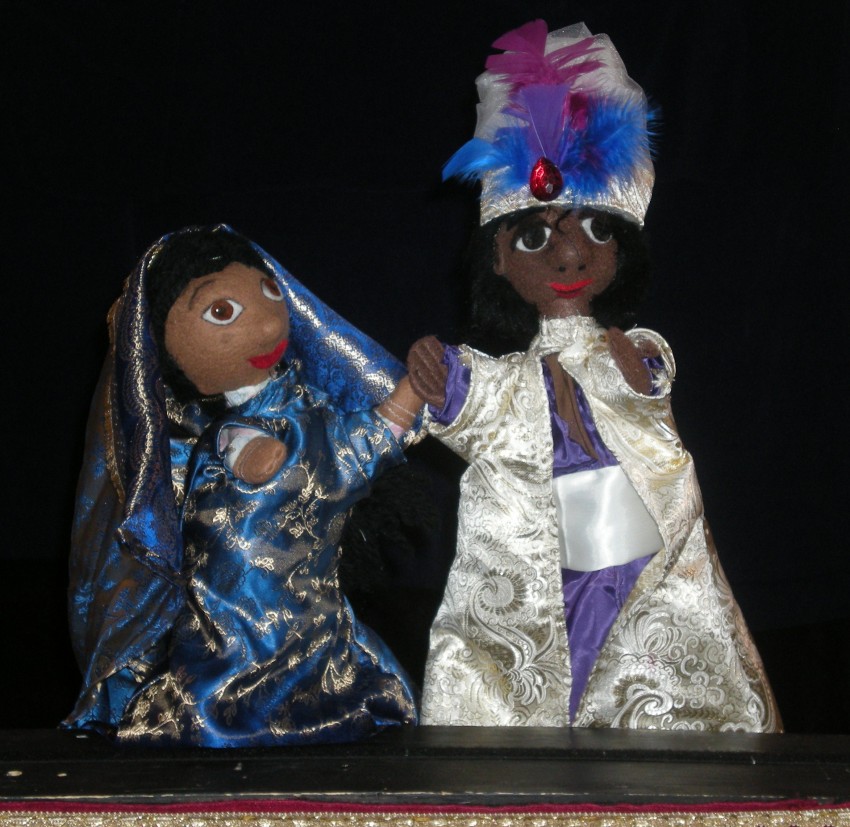 Aladdin and the Magic Lamp

I perform puppet shows for schools, libraries, day care centers, churches, fairs, birthday parties and other special events. I also lead puppetry workshops for children and adults, and I do school residencies and afterschool programs.

Mary had great communication prior to our camp event and tailored her show to meet our needs. The campers enjoyed the performance. Knowing it was "Puppet Week" at our camp, Mary spent some time at the end discussing the 5 different types of puppets and showing them examples of each kind.

Unfortunately, Mary Benson was unable to attend. She had been in a serious auto accident and was just out of the hospital.

The children and the whole congregation enjoyed "The Noah Show"!

Thank you, Jennifer! Your congregation is WONDERFUL!

Mary's Amazing Hoodunit had the audience squealing and standing up on their feet with excitement. When she teaches simple magic tricks at the end of the show, her warm and engaging style immediately drew them in. Not an easy thing with squirmy 6-yr olds but clearly she's done this a lot. I received many compliments from parents on the show - "where did you find her?!" was the most common question. She was courteous and arrived on time even though she had to travel over an hour to get to the venue. Definitely recommended!

We enjoyed the Biblical puppet show at our church. The children were very enthused about the puppet workshop and they had a lot of fun creating their own sock puppets.

I bring the show or workshop to you! For shows I come to your site from 60-90 minutes early to set up, and bring everything I need for the show - all you need to supply is a space, an audience, and a household outlet. The shows are suitable for ages 3 and up, and some of the shows even work well for 2-year-olds. The workshops are geared to children aged 5 and up, and can be adapted to your theme or time frame.

I have worked as a puppeteer since 1985, first with Dr. Neff's Incredible Puppet Company at Glassboro(now Rowan) University, Glassboro, NJ, and then as the proprietor of my own traveling theatre, Harmony Hill Puppet Theatre, starting in 1996. I have 23 different original shows,all with music, some with original songs, and 10 puppetry workshops. I can customize workshops to fit your theme and time frame. From birthday parties to large audience events, there is a show or workshop for almost any occasion. For the shows I bring my own draped stage, lighting, and sound system, and for the workshops I bring all the materials and tools needed; all that I need from you is a space, an electrical outlet, an audience, and - for the workshops - tables and chairs for the participants .

I provide my own lighting and sound equipment, and only need a wall outlet within 40 ft. of the performing area (I can accomodate a longer distance with advance notice). Since I use electrical equipment, I need to set up either indoors or outdoors with overhead protection. A room that can be darkened is best for optimum lighting effects, but is not necessary.

A Dragon's Tale -A Princess saves her Prince from a dragon. When the dragon decides to change his ways, will anyone believe him?

The Ladybug And The Firefly- A ladybug hurts her wing and needs help finding her way home. She hires a young firefly to light her way, but is neither grateful or polite until a hungry catbird comes along!

Antonia's Great Adventure- A young ant falls off a cupcake and can't find her way home. She meets a traveling flea circus, and many friends and foes on this odyssey of miniature proportions.

Puppets, Puppets, Everywhere! - This show asks, "What is a puppet?" with 4 vignettes of surprising puppets made of household items.

THE MYSTERY OF MANNERLY MANSION- Fox Moldy and Danish Kelly are sent out from The Sure-Lock Homes Security Agency to solve the mystery of some stolen heirlooms. They find more than one mystery at the mansion, including one that goes all the way back to the time of the Underground Railroad!

THE TREASURE OF 4-MILE BEACH - 2 boys who have just become step-brothers, but who don't get along, are drawn into a search for a legendary pirate's treasure.

S.O.S. MOTHER EARTH (Save Our Spaceship Mother Earth) Father Time takes the audience back to the days of the dinosaurs, the time of the dodos and to a present-day gathering of worried endangered animals. When a boy asks what he can do, he gets a special helper that follows him throughout his day to remind him of what he can do to help his Mother Earth.

ALADDIN AND THE MAGIC LAMP- This show follows the original tale from "1001 Nights", where there are 2 geniis and 2 villains, but Aladdin still needs to learn the importance of honesty before there can be a happy ending.

BEAUTY AND THE BEAST - Adapted from the original 1740 story by Mll. fe Villeneuve, this beloved fairy tale celebrates the transformative power of love.

A LITTLE MERMAID - This version of the classic fairy tale follows the original Hans Christian version, but with a happier ending!

AESOP'S FABULOUS FABLES- All ages enjoy this sampling of 10 of Aesop's classic fables, including "The Lion and the Mouse","The Crow and the Peacock", "The Fox and the Grapes," "The Sun and the Wind", and "The Boy Who Cried Wolf"

MORE AESOP'S FABULOUS FABLES- Aesop is back with more fables, including "The Ant and the Dove", "The Travelers and the Bear", "The Country Mouse and the City Mouse" and "The Goose That Laid the Golden Egg."

FANTASTIC FOOD FABLES - 3 famous fables - Pandora's Box, "The Tortoise and the Hare", and "The Country Mouse and the City Mouse" are retold with a health food twist to help children learn about good nutrition.

FANTASTIC FOOD FAIRY TALES -In this sequel to Fantastic Food Fables, the father discovers his son needs a refresher course in healthy food choices. This time there's Goldilocks, teaching the 3 Bears how to get their day off to a good start with something from each of the major food groups, and The 3 Little Pigs, who avoid being on the wolf's menu by a hair (from "their chinny chin chins!") thanks to one pig who "eats smart!"

Legends Of The Big Dipper - Stories from around the world - Ancient Greece, Ancient China, Native Americans, and the American South present the lore and facts about the familiar constellation.
From Out Of Shadows - 4 World Tales - from China, Peru, Korea, and Canada- are presented with shadow puppetry

The Tricky Puppet Revue- More than 40 Puppets are featured in humorous skits performed to popular music from the 50's, 60's and70's.

The Amazing Hoodunnit- 2 puppets put on a magic show. The assistant is a bumbling, playful kind of guy, who makes some mistakes. but whose dream is to be a master magician.

Periwinkle's Magic Show - A magician, a talking tropical bird, and a rascally rabbit involve children in their comedy magic show.

Faith, Hope, And Love - The story of Noah, the Prodigal Son, and the Good Samaritan are used to teach about the 3 great virtues - Faith, Hope and Love.

The Lost Sheep- This is an interactive presentation of the Parable of the Lost Sheep. with audience members playing the flock of sheep and the band of goats!

The Noah Show- Noah's family and the animals have survived the flood, but now they have an even more challenging task; learning how to get along with one another!

Alcazar And The First Christmas- Alcazar, the third wise man's camel, hides when it's time to go to Bethlehem. It takes an angel to change his mind, but the journey is not easy - and Alcazar is going to need a miracle!

Joseph And His Brothers - The timeless Bible story of forgiveness, faith, patience, and perseverence, which shows how God can transform the worst of circumstances into a blessing, is performed with rod puppets. Volunteers from the audience are asked to come up and play the parts of some of the brothers and Egyptians!

I studied under Dr. George Neff of Dr. Neff's Incredible Puppet Company, formerly a puppet troupe in residence at Glassboro (now Rowan) University in Glassboro, N.J. I continue to perform with George and Ann Neff , along with Henry Garrison and Jeff Cleve, when the occasion arises. Additional influences are Joe Santoro of Wonderment Puppets, West Virginia, Paul Vincent Davies, Massachusetts, and -of course- Jim Henson and his family!