Back to Interactive Performers

Hank Fincken: A National Theatre Company of One 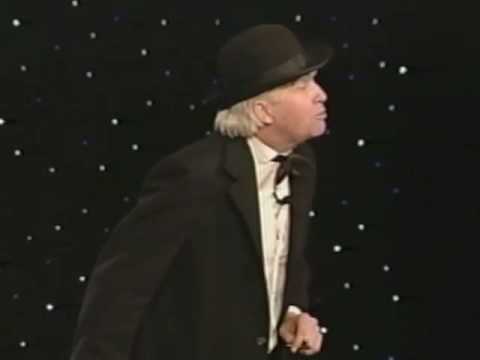 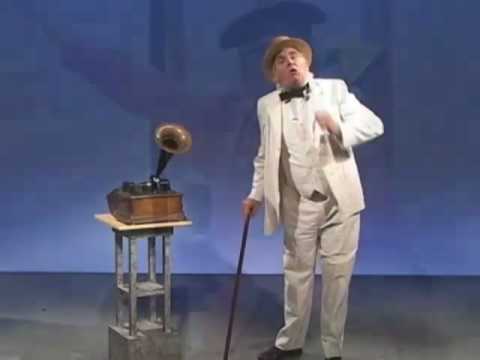 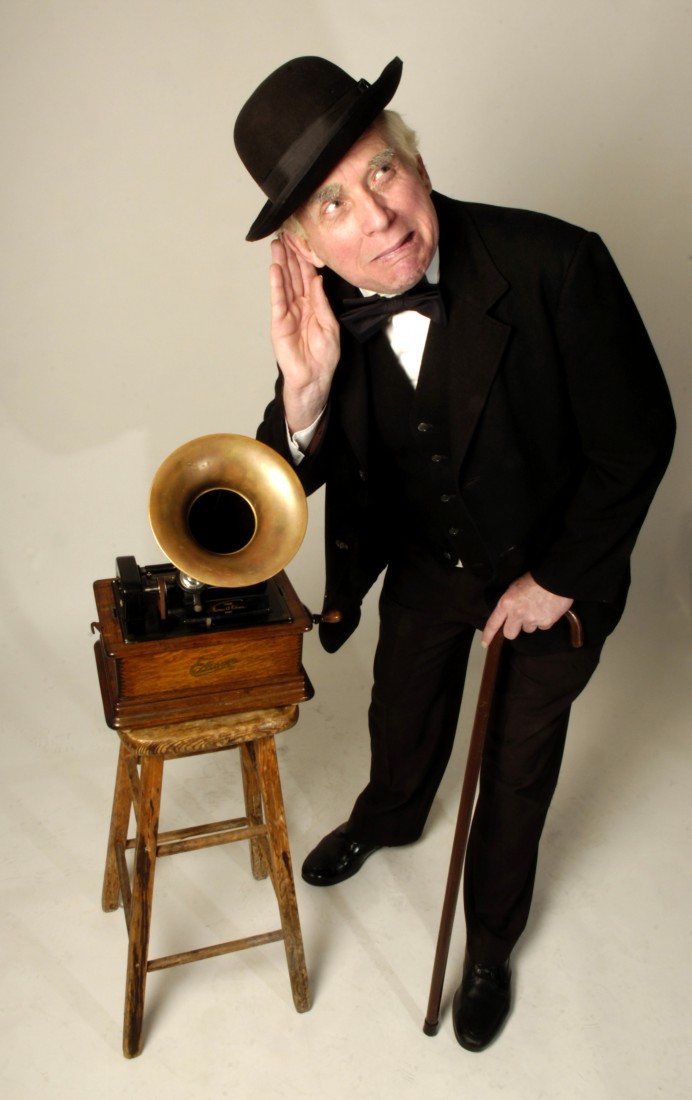 Edison listening to his most original invention, the phonograph. 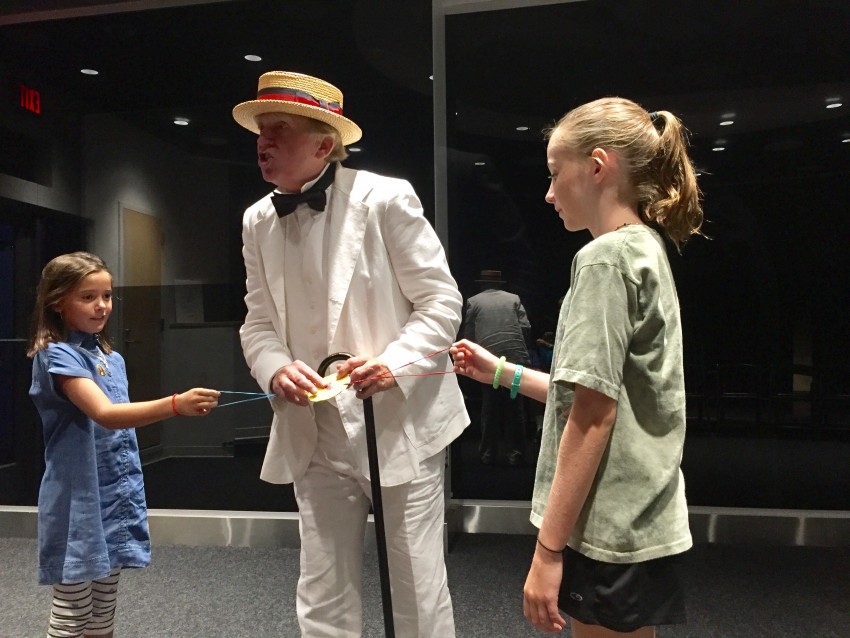 Edison explaining the beginning of the motion picture camera. 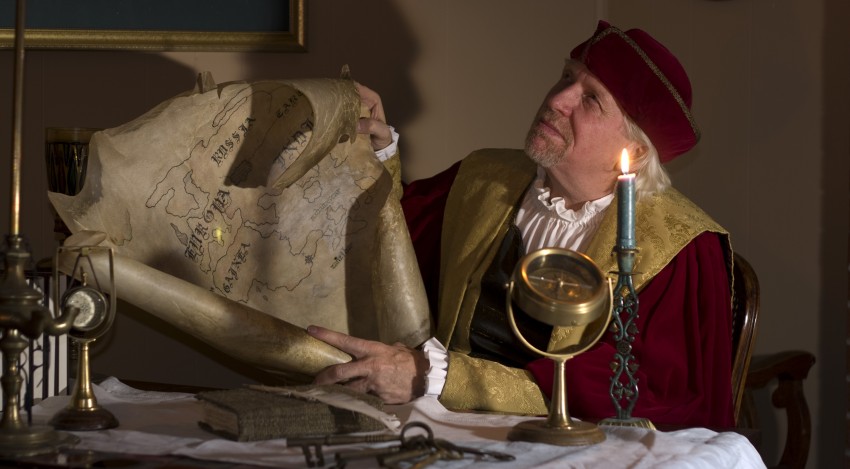 Christopher Columbus: The Shame in the Glory 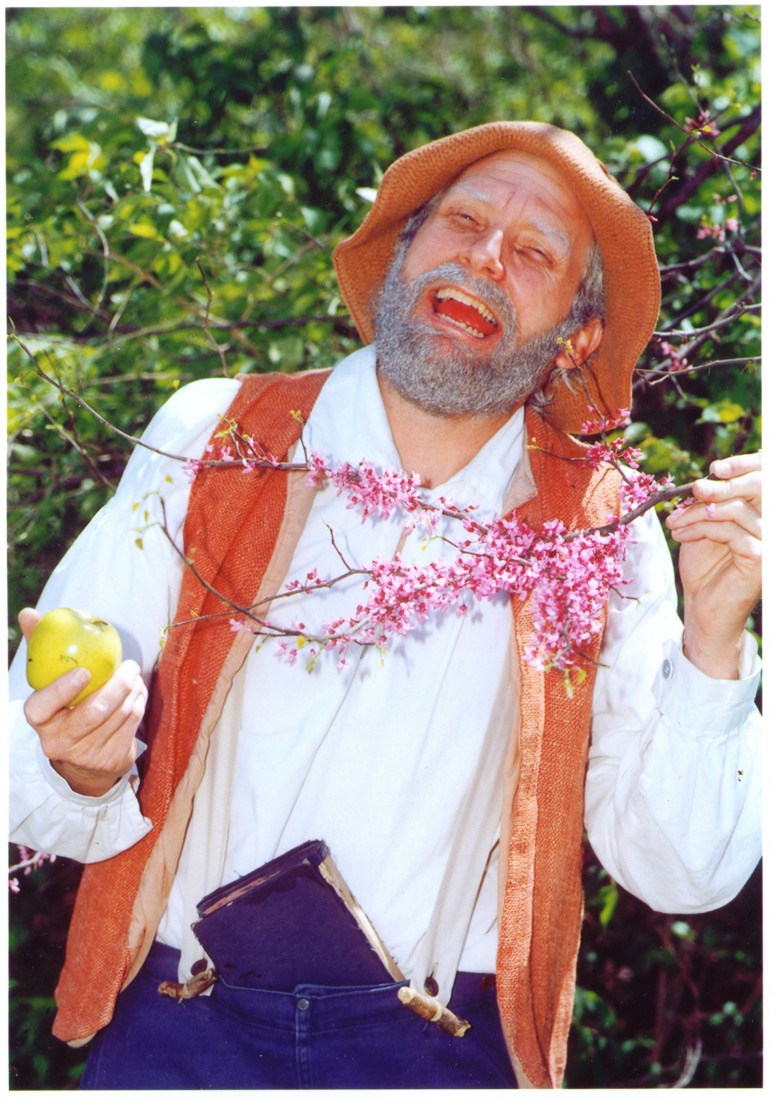 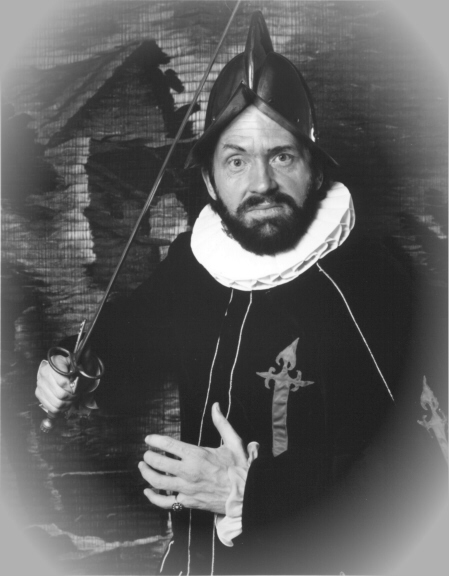 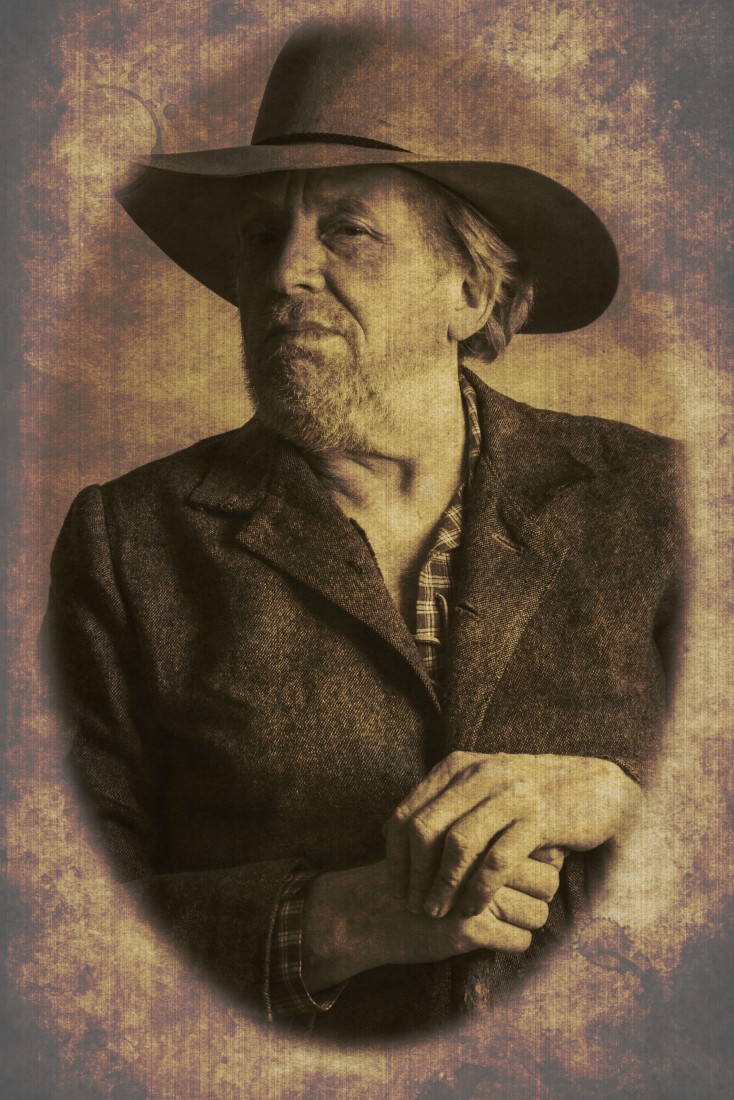 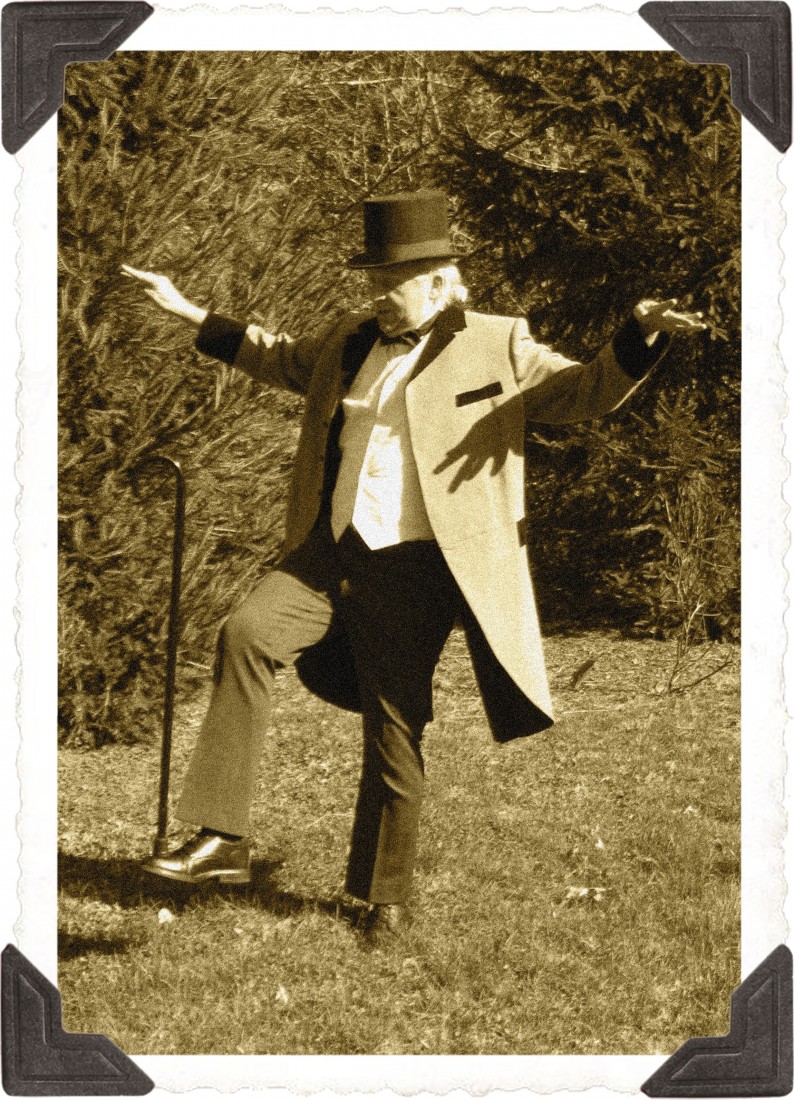 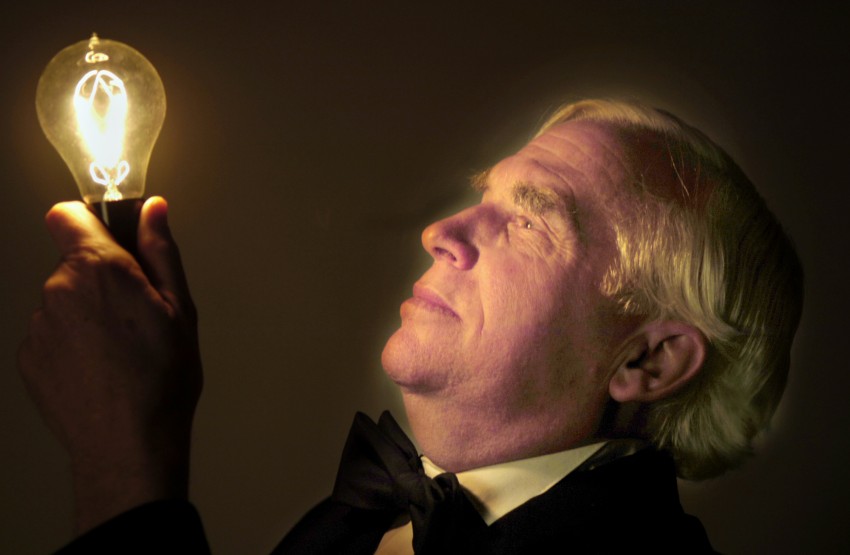 The lighter side of Edison 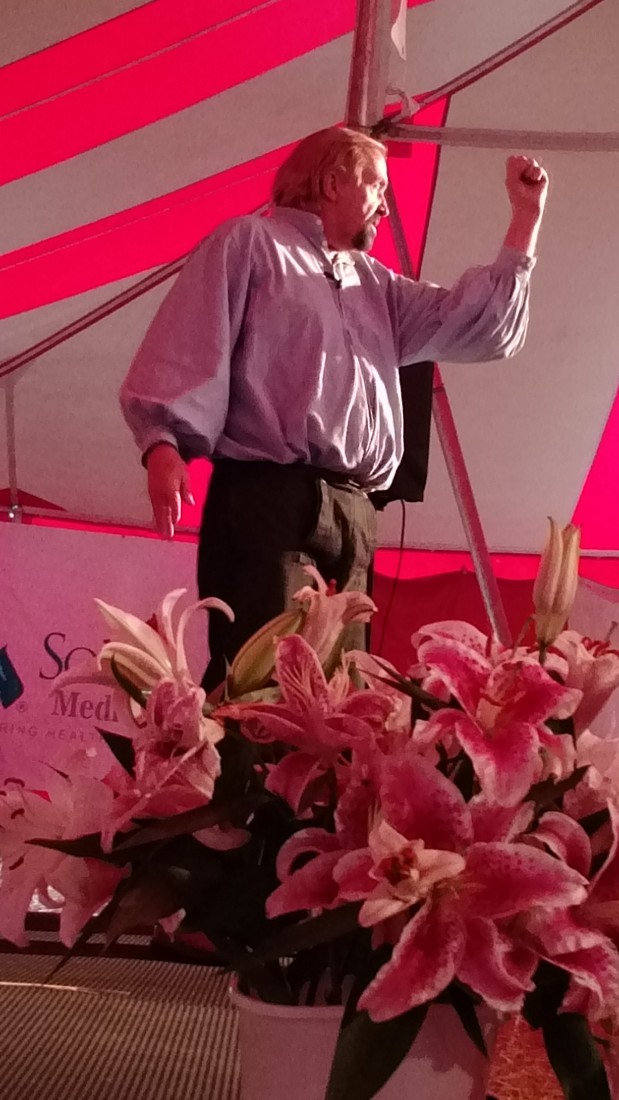 Bruff warns of the dangers on the journey west 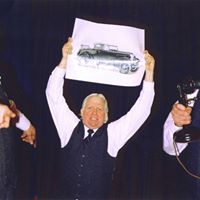 Each presentation is molded to fit your needs, adapting to age and interest. Hank provides excellent publicity materials, study guides, and recommendations on request. Humor abounds. If History were to repeat itself, it would be like this.

As for Edison, he didn’t invent the 20th century. His inventions just made it seem that he did.

Hank did a WONDERFUL job playing John Appleseed for our Cub Scout troop! He was energetic, funny, informative and incredibly entertaining. It's not easy to keep a group of young Scouts engaged, but Hank truly has a gift for keeping kids (and parents!) interested! We thank him for his incredible talent, his time and his dedication to his characters and his craft.

This guy is phenomenal!

Hank is a Broadway quality actor for hire at a fraction of the cost. I booked him for a short video and he went above and beyond to ensure we got the best footage possible. I highly recommend Hank and will definitely be hiring him again.

Dart, the Society of Mutual Admiration recognizes that you nailed it. Thanks!!

Awesome Connection to History and to his Audience!

I have had the pleasure of welcoming Hank Fincken as a guest performer and teacher for my students here at the Youth Services Center, several times over the past few years. He has presented lessons and performances for characters such as: Thomas Edison, Christopher Columbus, W.C. Fields, and Johnny Appleseed. Our youth range in age from 10-18 and come from all different types of backgrounds and social classes. My students typically struggle in a traditional school setting and are at our facility because they have been in trouble with the law. Because of their situation and past experiences….my class isn’t exactly the easiest audience to win-over. Hank and his characters ALWAYS seem to have my students focused, engaged, laughing, and asking questions within the first ten minutes.

I continue to work to get Hank back here to perform because of the way he connects themes from history to my students’ present day lives. Hank has proven with his performances that he is considerate and attentive to maintaining the integrity and historical accuracy of the characters he portrays. He shows great awareness of the skill levels and personalities of the audience, and is very willing to adapt to his surroundings. I will continue to ask Mr. Fincken to visit my students and highly recommend him as a teacher and performer for both young people and adults.

Thanks, Shawn. Working with you and your students prove how much the arts can help young people get some perspective on their own lives. You deserve credit too for always having your students prepared for my visits.

I have observed Hank Fincken's performances for several years and have always been in awe of his depth of knowledge and total immersion in the characters, whether it's Thomas Edison, Christopher Columbus, Johnny Appleseed, Henry Ford, and others. He is an amazing actor and can engage his audiences whether they are senior citizens or 2nd graders. He can entertain, educate, and give his audiences something to think about. I would highly recommend Hank Fincken - you will not be disappointed!

Good educators make me look better. When the students are prepared, we can delve deeper into the history.

Hank Fincken is a Character

Hank Fincken is a character, in fact, he is many characters.

In Warren Ohio, Hank has portrayed several historical characters such as J.G. Bruff, Thomas Edison, Johnny Appleseed and Christopher Columbus. I have personally witnessed those portrayals. He was so well received by the community that he was asked to return to portray U. S. Attorney Richard Crowley at our popular Women's History luncheon. He received rave reviews and a standing ovation from a large crowd that was well informed on the women's suffrage movement as it was based in Warren for a period of time, at the home of Harriet Taylor Upton.

Hank has been named “Master Artist,” “Outstanding Performer” and won the Pinnacle Award, all impressive awards given by professionals in respected arts and theatre organizations. What impresses the large audiences that attend his performances are his character portrayals. They are a complete package. Hank mesmerizes the audience with a monologue in character. He is engaging, animated, pensive and connects with an audience of both children and/or adults in a significant way. He makes them think, entertains, and then inspires them to dig deeper and learn more. He stays in character, masterfully answering questions. Afterward he answers audience-posed questions as a scholar, out of character.

Hank can be found even an hour after a performance has ended, surrounded by people who are captivated by discussions on the character he has just portrayed. Hank is approachable, humorous, supremely professional, but not a stuffy historian. He is able to discuss a wide variety of historical topics and brings a wealth of his own life experiences to the conversation.

Hank has also spent time out of the United States performing in Central and South America and is bilingual, which adds to his diversity.

Our community gives the highest recommendation to Hank Fincken and encourages other communities, schools and civic organizations to bring Hank to their community.

Thanks, Sue. You make me long for the good old days of Ohio Chautauqua.

With my performances, you are going to get accurate, thoughtful History in which the audience always plays a role. The interaction is often the highlight of the performance because I improvise, basing my answers on Edison's (or whichever historical character) life and times. Who we are is when we are, so I try my best to never push my 21st century values on their time or place.

There's humor too. Complex History need not be dry and dull.

When possible, I use the historical person's own words. If not, I know the man well enough that I can make an approximation. I do not deliberately invent History; I just make it entertaining.

Biography: Hank Fincken
A National Theatre Company Of One

For 25 years, Hank Fincken has performed his 8 original one-man plays throughout the USA, Spain, and South America. He has published 20 plays and stories, dozens of essays, and one book: Three Midwest History Plays And Then Some.

He was awarded the title Master Artist by the Indiana Arts Commission, Outstanding Performer by the Indiana Theatre Association, and has received six national Pinnacle Awards for his teaching of the arts and history through video conferencing.

Hank was in a Hollywood film which featured Thomas Edison, wrote an original play for the city of Defiance Ohio about a young man who lived with the Shawnee in 1793, performed as Prosecutor Richard Crowley in Susan B. Anthony’s trial in Adams, Massachusetts (her birthplace), and performed at the New York Chautauqua Institution as Ford and Edison.

Hank performs in schools, libraries, and colleges around the country. For many years, Hank has traveled the Chautauqua Circuit. For example, he has already been booked by Oklahoma Chautauqua to perform for 4 weeks as Francisco Pizarro.

In the summer of 2016, the Tandana Foundation invited Hank to teach Theatre to native children in the Andes of Ecuador. Besides teaching, he wrote an original play based on Inca legends and produced it in the town of Otavalo. He wrote his second play in Spanish the summer of 2017, once again in Ecuador. Next year, he will be teaching teachers how to use theatre to make History come alive—in Spanish.

He also performed as Thomas Edison, Henry Ford and Christopher Columbus at TechFest in Dayton for the 15th year in a row. The emphasis there is always Steam. Hank makes it Steam.

Since I do a number of plays based on historical characters, there are different requirements for each presentation. Don't worry. The tech stuff is not complicated because everything has to fit in my CRV. I would send you what I need way in advance. I will also arrive early for tech check.

Let me just add: I adapt my presentation to your place and your needs. That is why I can do a short presentation or a longer one.

Hal Halbrook got this one-man historical play going, and I have it tougher than he did. I write my own material. He had the best of the 19th century fiction authors write his. In the 21st century, I am trying to be the best.

Access to audience. If audience space is large, a lapel mic. Certain characters need certain lighting but nothing difficult. Tech sheet will be sent upon request.