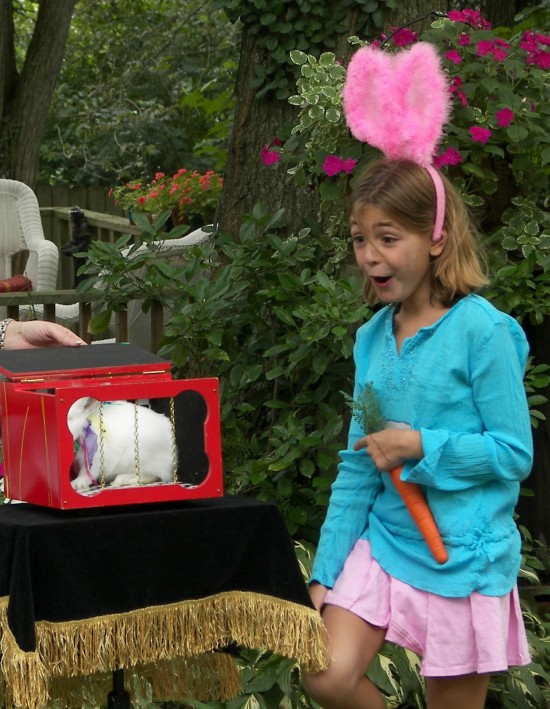 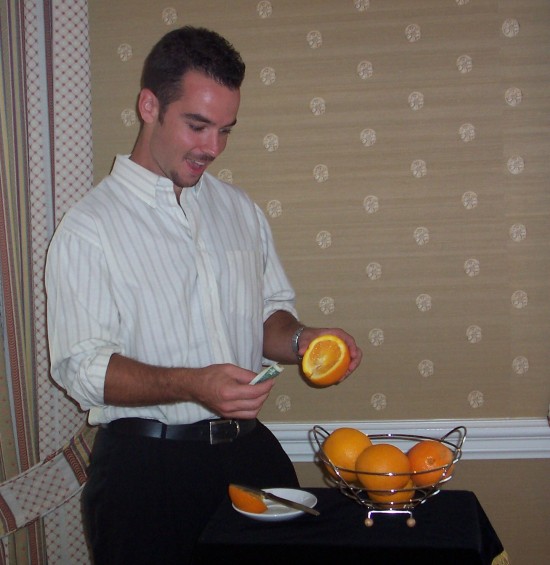 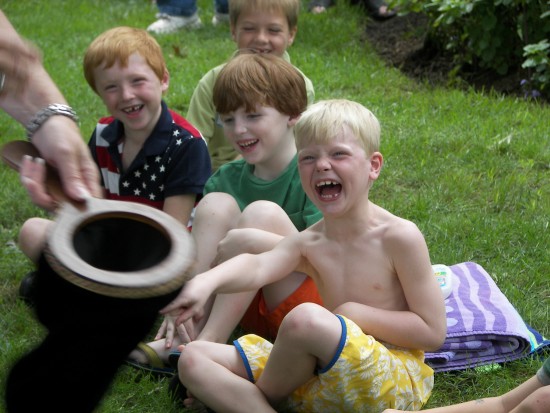 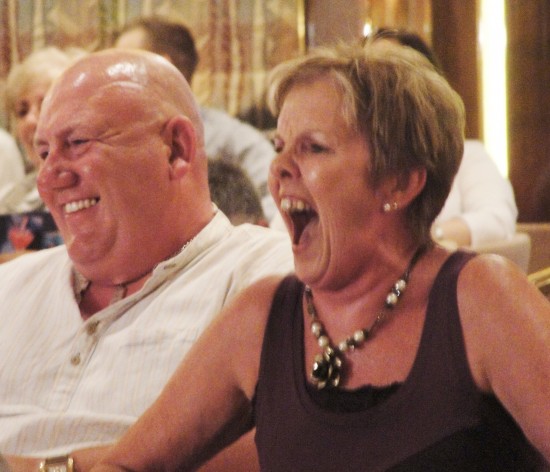 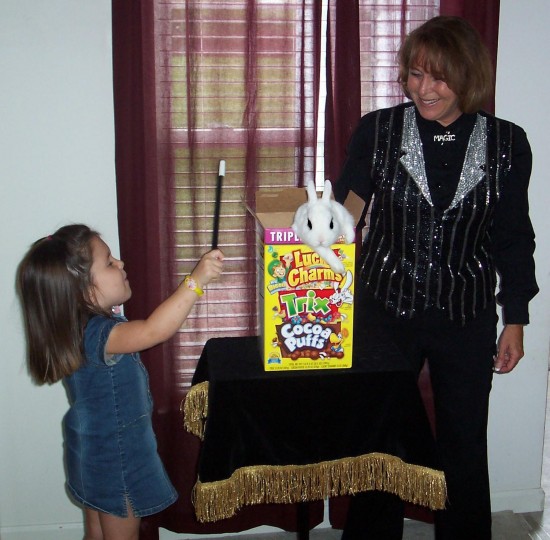 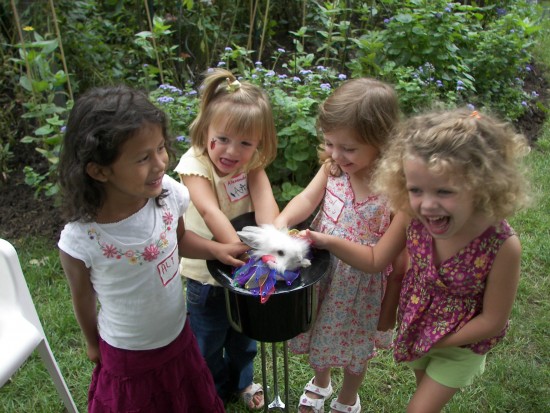 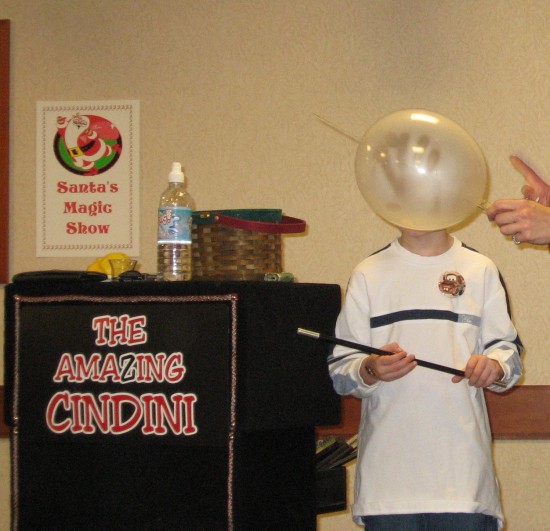 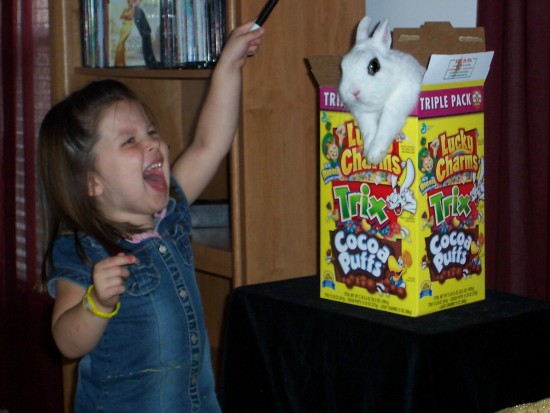 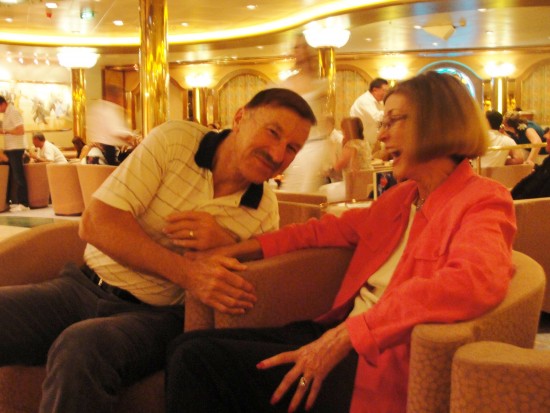 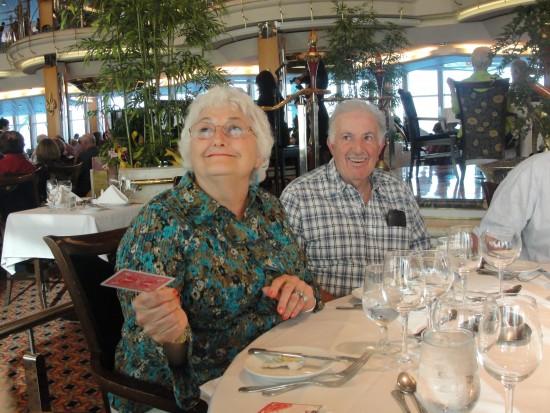 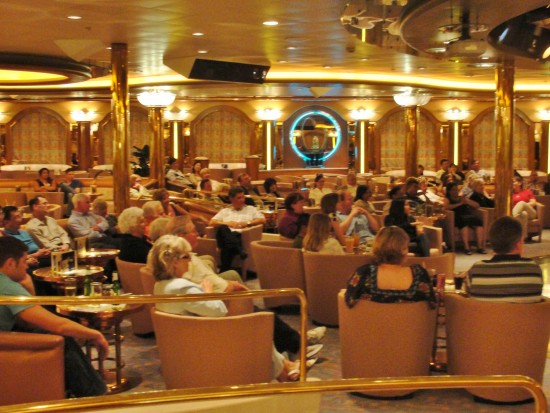 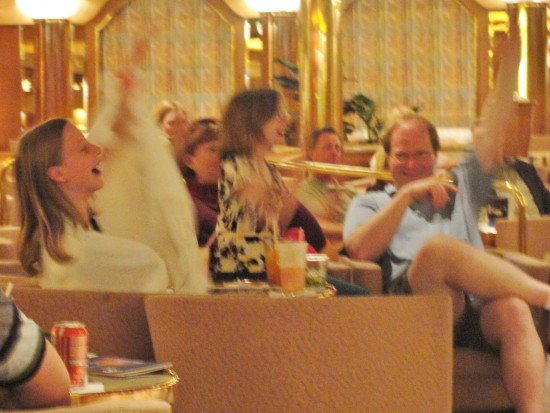 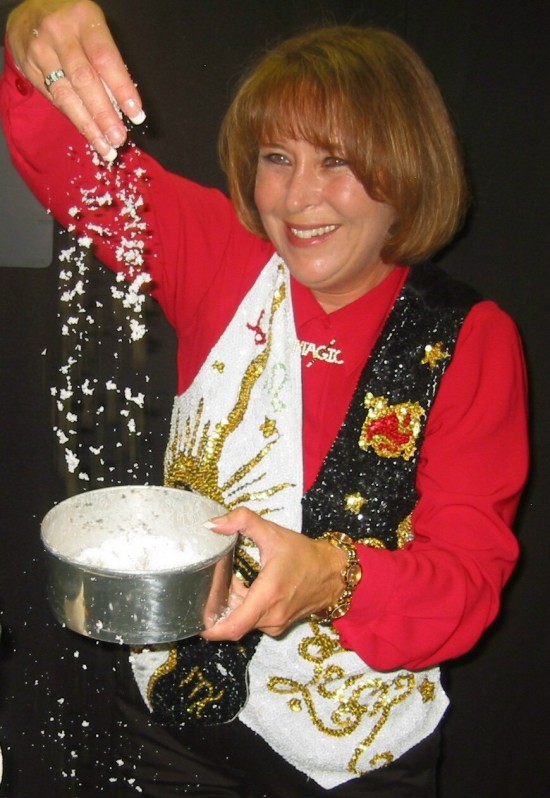 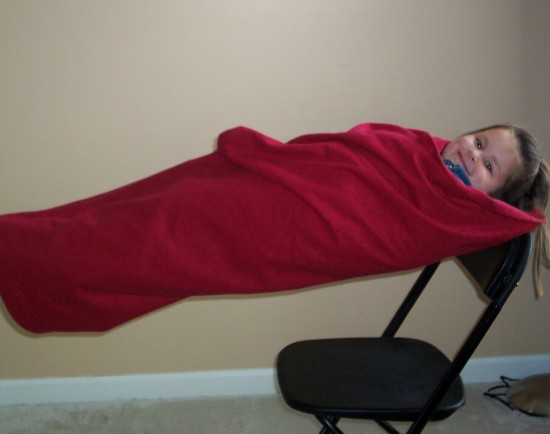 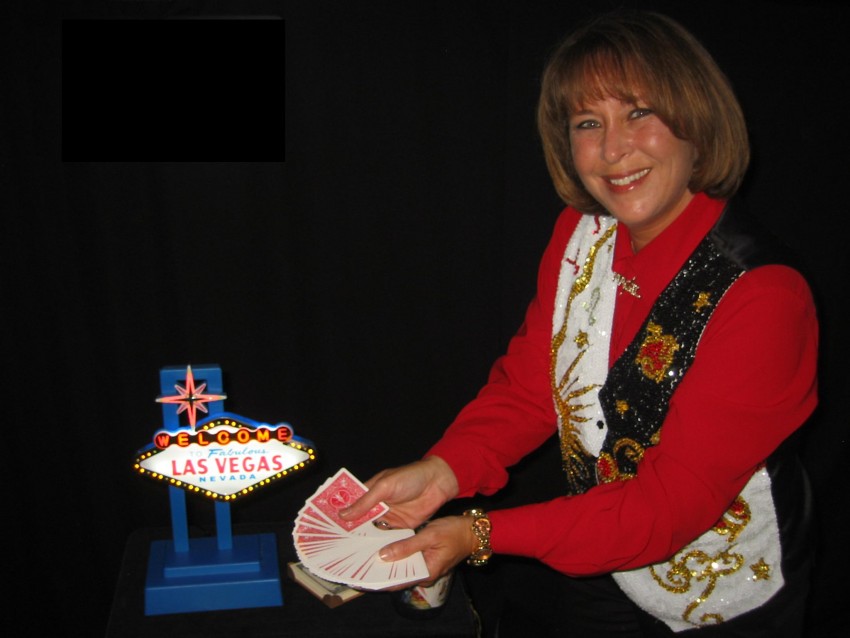 Cincinnati's best Magician for all ages and occassions. Fast-paced and packed full of clean fun including Trix, a live entertaining rabbit. Lots of laughter and mystery to enchant children’s minds while entertaining and baffling adults as well. Amazing Cindini is a magical entertainer perfect for any event, private, corporate or public. Guaranteed to create magical memories that will be remembered long after the event is over.

My church hired Magician Cindini for an event on Saturday, September 17. I was very disappointed in (1) her business practices and (2) her performance - it was adequate magic but very lack-luster. I found it odd that she had no video to show us prior to us hiring her. Now I know why - she is pretty boring and the show had no piazza.

Business Practice: We originally hired her to be at our event from 11-3 and do 4 20-minute shows. So that means she would have performed (the same show each time) for 20 minutes and then a 40 minute break, and that schedule would be repeated over 4 hours. On August 18, I spoke to her on the phone about changing to 5 20-minute shows. So perform for 20 and then have a 25 minute break and that would be repeated 5 times. She agreed. (She says she doesn't remember talking to me about this.) But on August 19, I followed up with an email confirming the start times for the 5 shows. She didn't respond but does acknowledge she received it. Well, the evening before our event she sends me an email and states that since we changed the schedule we owned her an additional $200. She was spending NO additional time at our venue. I told her she agreed to the additional show and did not update her pricing on August 19. Her statement was "you didn't change the initial contract with GigSalad so what's on the contract is all I am obligated to do." She never told me that was the protocol that I should take. So our options were to pay her or to cut a show. We had already promoted 5 shows and had signs all over the area with the 5 show times. I think this was shady business practice, but as a church we weren't willing to not pay her and then she would complain publicly about us. We are a church with integrity and love to give back to our community with this free festival. She was paid the additional $200 (on top of the original $795).

Her show was adequate magic for young kids but very "blah." She started with rules. I think what she said was appropriate but what kids wants rules for a fun event? The rules could have just been explained with a different approach. The magic tricks were equivalent to the magic kits you can buy at a store. I think any child over 6 knew exactly how Trixie the Rabbit appeared. And the show just lacked enthusiasm. In this day and age, no lights, no background, so special effects - felt a little more like a book report than fun entertainment. We won't hire any other performer within seeing a video.

The Amazing Cindini was featured during our cocktail hour and our guests are still raving over how impressive her tricks were. They are a hard bunch to impress so this is incredible. Highly recommend her for your event/wedding!

The party was highlighted because of her performance. The bunny was of course the big hit. Glad to have her over for New Year’s Eve

She was great! My son and all his friends loved her. She was on time and a hit at the party!!!!

On time and very interactive, I was busy with the event

Great magic for the kiddos!

Cindini was the hit of my mom’s 60th birthday! She was funny, had a lot of audience participation, and the magic was fantastic. I highly recommend!

She was very engaging with the audience. Fun to watch with the little kids. Great for school ages Pre-k through 4th. She was chosen to entertain for a school assembly Pre-k through 8th grade. A hard group to keep entertained!

Cindini always goes above what is promised.

I have had Cindini at my plant Christmas party and at home parties and she is excellent with a group of 10 or 100. I highly recommend her over much more expensive entertainers. She relates well with the crowd and is very entertaining.

The Amazing Cindini put on a great performance. She was very effectively interactive with her audience and included humorous comments during the show. She received enthusiastic applause after each of her magic tricks and at the end of her performance.

Cindini did a wonderful job at our annual Christmas Dinner and Party. She performed close-up strolling magic tricks during our pre-dinner cocktail party and then did a standup Magic Show after dinner that had everyone involved and laughing. I highly recommend Cindini for any type of group event.
Chuck Hais - Queen City Financial Advisors

The Amazing Cindini performed in our nursing home facility and she was an absolute hit! The residents were asking when she would be back to perform again, the minute the show was over! She was professional, on time, and has a wonderful stage presence! She kept the whole group engaged and laughing the entire show! You won't regret booking The Amazing Cindini!

Cindi had the kids mesmerized from the second she started her act. A hour seems like a long time to hold kids from 2-12 yrs old but they couldn't get enough. This was a Halloween party for 150 kids. She got them involved in the magic tricks by calling up one or more kids to participate. The act is simple enough for all kids to enjoy and very fast paced. I got great feedback from many parents. I would highly recommend her.

The kids loved it!!

The Great Cindini was amazing! We had a large age range of kids (2-10 years old) and her 40 minute magic show kept everyone's attention the entire time. The adults enjoyed it as well!

We hired Cindini to perform for all the children at our work open house (about 15 kids), and she was fantastic. The kids (and adults as well) really enjoyed her show! We would definitely recommend her for your event!

The BEST birthday party thanks to the AMAZING Cindini!

I have so many priceless pictures I wish I could post! A picture is worth a thousand words, and folks the looks on the children's faces and the adults were indescribable, especially when the Amazing Cindini turned her pretend bunny into a live one! My son said the cutest thing was all the way from our house both of the kids were trying to figure out how she did that! We had the party for our grandson and we just cannot rave enough about how her magic thrilled all the kids and adults! The kids LOVED the magic workshop at the end since she not only taught them tricks but let them keep them and the top hat as a party favor. I give her 10 stars!

Cindini did an awesome job at my son's birthday party and although it was a few months ago, a lot of people still talk about it.

I hired the Amazing Cindini for my parent's 50th wedding anniversary. Her performance was first-class! My family can be a tough audience, but she nailed it! Even the family skeptics were won over by her talent and bright personality! She even performed magic for the few kids that were there. I would definitely recommend and hire the Amazing Cindini again!

My daughter just celebrated her 4th birthday and we hired The Amazing Cindini as the entertainer. She was "amazing". She was able to keep the attention of 9 children and was fun throughout. The kids had such a blast. Even the adults enjoyed the show. She was extremely professional and wonderful to work with throughout.

We hired the Amazing Cindini to perform at our 8 year old twins (girls) birthday party. We couldn't be happier with the outcome. Cindy was helpful from day one and answered all of my questions. For an additional fee (which was very reasonable) she brought a magic trick for each child to take home. We had 20 children in attendance ranging in age from 6-10. The children were well behaved and Cindy was able to hold their attention. Two thumbs up.

The Amazing Cindini did an amazing job at my son's 4th birthday party! She knew exactly what the age group could comprehend and have fun with! Thanks Cindini!

In a family show, you may likely see a signed bill or card magically appear inside a piece of fruit, or quite possibly a one-dollar bill transform into a one-hundred dollar bill. Regardless if it’s a birthday party show for a child or for the entire family, the show will have a variety of magic tricks including a live rabbit, silks, ropes and cards, and let’s not forget that The Amazing Cindini reads minds and makes predictions of things that have been baffling her audiences for years!

The Amazing Cindini is a professional magician, magic teacher, trainer, hypnotist, motivator and emcee. She is a member of Society of American Magicians and the International Brotherhood of Magicians. Cindini has been performing magic professionally since 1995 and has entertained audiences of all ages throughout the U.S., Europe & Asia. She has taught magic to thousands of students per year in Cincinnati and surrounding areas and owned and operated a summer magic camp in Mason, Ohio and performed close-up magic regularly at a number of different local restaurants.

I have two older cousins that are magicians (one from each side of the family) so it's fair to say that magic is in my blood. I have been very fortunate having had the opportunity to personally receive hands on training and instruction from a vast number of famous magicians from all over the world. I have attended hundreds of conventions, workshops and seminars working to master my skills. I do not have just one magician that has influenced me as I have had many amazing mentors.