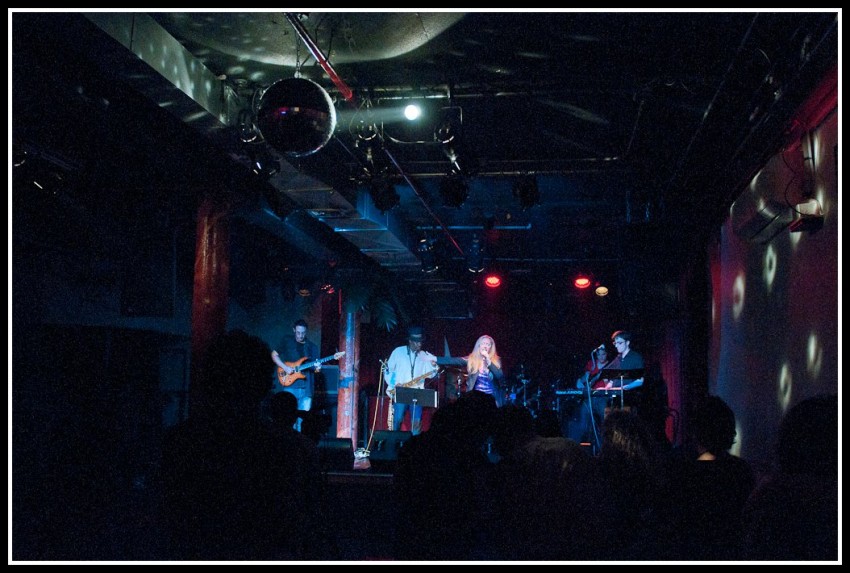 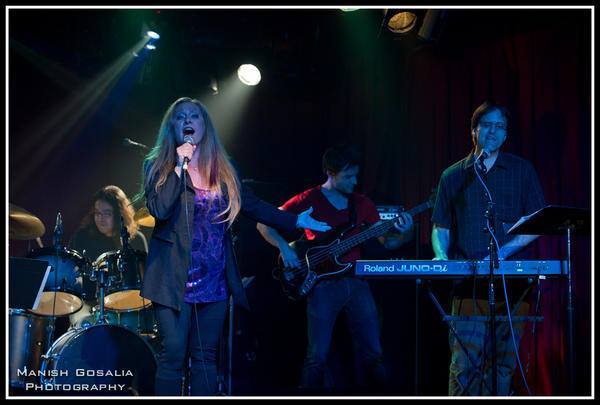 INTERNATIONAL SINGER! AWARD WINNING SONGWRITER! Christina performs solo or with her band.
As a solo artist she performs through a TC Helicon VoiceLive 3 Extreme vocal and guitar effects processor, with master backing tracks.
GAUDET Band is known for their fiery performances and commanding stage presence, Gaudet captivates audiences with a compelling fusion of excitement and great music, bringing together Christina Gaudet's music backed by this phenomenal band. The Music is rooted in a gumbo of magical musical spice from New Orleans with a dash of New York salt for taste!
A combination of searing guitar solos, great vocal melodies and lyrics, Gaudet takes song presentation to new heights!

Be the first to review Gaudet

As a solo artist, Christina performs through a TC Helicon VoiceLive 3 Extreme vocal and guitar effects processor that allows her to utilize natural vocal harmonies, as well as embellish guitar effects, as songs demand with high quality mastered tracks. For smaller venues and private events, requesting Solo/Duo acts, Christina can provide her own professional PA system for her act. For larger events, requesting full band, a full PA system with at least 8 channels will be required. Lighting is not provided, at this time.

In concert settings, Gaudet usually performs one 45 or 50 minute set. Can perform two or three sets with one or two intermissions. The sets include original material written by Christina Gaudet for the Gaudet Band. We will perform covers upon request.

GAUDET Band: Pop, rock and funk band out of New York City......
Funky and always entertaining, the band is led by an outstanding female vocalist who is backed by some of today's top professional pop musicians. You can even add another one, or even two male or female vocalists to the line-up to create an amazing vocal harmony blend. With GAUDET there is more of an emphasis on pop/rock with a performance from Christina Gaudet. You can also ask for a live brass section for the majority of band bookings, but a brass section is always an optional extra! The core band is a 6-piece with 1 singers but this can easily be scaled down to a smaller band if required, or scaled up to create a monster party band.

It was an honor to have been accepted as a Grammy Ballot Artist for the 57th Grammy Awards for the Album, ‘Wild Things’.

Christina was the WINNER of the AKADEMIA Award for Best Pop Rock Album 2016.

She was included in the "BEST OF THE TOP UNSIGNED ACTS OF 2010!"

Christina, grew up in the famous French Quarter of New Orleans, listening to the funky soulful sound of Louis Armstrong, Fats Domino, Professor Longhair, Allen Toussaint, Dr. John, Irma Thomas, Aaron Neville & The Neville Brothers. It was that gumbo of musical spice that seduced her into an unending love affair with music.

One of the highlights of her career was to work with Grammy Winner and Rock and Roll Hall of Fame legends Leiber and Stoller as the lead in their Workshop for Tales of Manhattan (Broadway).

Following that performance, she recorded with Toussaint at his famous Sea Saint Studios in New Orleans and released SeaSaint Sessions with him in 2007 as a sentimental tribute to the great music recorded there. Sea Saint Studios was destroyed by the devastating hurricane, Katrina.

Christina also had the privilege to work on The Middle of Nowhere (Off-Broadway), written by Oscar and Grammy Winner legend Randy Newman and starring, Vondi Curtis Hall and Nick Sercy (known from Stephen Spielberg’s Castaway).

Internationally Christina has toured throughout Europe. Some of the many countries include; Germany, Italy, Yugoslavia, France, Austria, England, and Finland. It was a great experience for her to be able to perform at the Schubert Festival in Vienna, Austria. That endeavor led to performing for the great composer Aaron Copeland in a tribute performance to his music. South American tours include Mexico, Central America, South America and the Caribbean Islands.

Wild Things is the 11th production in World Wide release. Currently, Christina is working on her next album.

THE GAUDET BAND:
Known for their fiery performances and commanding stage presence, 'GAUDET' captivates audiences with a compelling fusion of excitement and great music. The Music is rooted in a gumbo of magical musical spice from New Orleans with a dash of New York salt for taste! A combination of searing guitar solos, great vocal melodies and lyrics, 'GAUDET' takes song presentation to new heights! "A Breath of Fresh Air..... Raw, like music should be."-The Project, NY

Fun and always entertaining, the band is led by an outstanding female vocalist who is backed by some of today's top professional pop musicians. You can even add another one, or even two male or female vocalists to the line-up to create an amazing vocal harmony blend. Compared to GAUDET there is more of an emphasis on pop/rock with a performance from Christina Gaudet. A brass section is always an optional extra! The core band is a 6-piece with 1 singers but this can easily be scaled down to a smaller band if required, or scaled up to create a monster party band.

These requirements (or ‘rider’) form an integral part of all contracts. Any non-fulfilment of these requirements may be considered breach of contract unless previously agreed otherwise. If there are any problems with any of the terms below please contact us to discuss. It is possible that we can arrange alternative options in some cases if required.

A minimum of 3 (three) separate 13A sockets (not one socket with an extension lead) on the same phase. This supply must be able to cope with up to 8KW of power usage.

A safe performance area is required with a MINIMUM depth of 12 feet and a MINIMUM width of 16 feet for the 5-piece band. Larger bands may require more space. The band may be able to perform without raised staging if necessary but this needs to be mutually agreed before the booking is confirmed.

Our musicians will need to park as close to the performance area as possible in order to unload equipment. Close access to the stage for unloading will make load in time much quicker. If the band has to carry equipment for a significant distance in order to access the stage area then this will significantly increase load in time required. Since our musicians are based in different locations it should be assumed that each member of the band may require a parking space. In practice however, some musicians will share transport.

A lockable and heated room is required for sole use of the band. This will be to change in, eat any food provided, leave bags/cases and leave valuable belongings whilst performing. This room should also have a table and enough chairs for the whole band plus sound engineer. Our insurance will not cover theft from an unlocked room.

Due to the amount of time spent travelling, setting up and performing, a hot meal is required for each band member (plus possibly 1 sound engineer in some cases). Sandwiches are not an option as at least one of the band has an intolerance to gluten, and sandwiches would also not constitute a meal. There may also be at least one vegetarian, depending on line-up chosen. Food should ideally be provided before the performance, but can be provided during an interval if 45 minutes or more is allocated. Soft drinks and water should also be made available throughout the evening at no cost to the band. If providing food at the event will prove to be expensive or problematic, then a food surcharge can be added to the fee for the band to source their own food from a local provider (please ask for surcharge details if you wish to choose this option). An evening buffet will suffice if the amount of food available to the band is equivalent to a full meal rather than simply a snack. For performances much shorter than the standard package, with a location local to the band, food may not be required.

For full set up of PA system, lighting and band equipment, 90 minutes is required in order to set up and perform a sound check. This time may increase if the loading access is not adequate. If PA system and lighting is provided at the event then the musicians will only require 45 minutes in which to set up the remaining equipment and perform a sound check. Time should also be allowed for the band to eat their meal prior to the performance if possible, otherwise a minimum of 45 minutes should be allocated during the first interval. A minimum of 30 minutes break is also needed between each set.

Please check with your venue to make sure there are no sound/decibel meters present. This may hinder the performance from the band, and depending on the type of sound meter present can also cause damage to equipment. It is possible that we will not be able to accept a booking where sound meters are monitoring the volume of the performance. Some venues also have constraints on the use of amplified equipment in certain areas, so please check with your venue before confirming your booking. Please also ensure that your venue has the appropriate licence for a live musical performance of this type. If problems arise with the venue that cannot be resolved, and a performance from the band is then deemed impossible, the standard cancellation procedures will need to be followed if a booking has already been confirmed. If in doubt, please ask.

Please refer to the separate band requirements document for all necessary information. This document forms an integral part of this contract and any deviation from these requirements may be considered breach of contract unless alternative arrangements are agreed otherwise.

Usual set-up requirement for the ‘band’ at an event is 90 minutes prior to the event start time (i.e. 18:30 arrival for a 20:00 start), and this time will be used to set-up equipment, sound check and change into performance outfits. If the ‘band’ is required to be set up earlier than the contracted start time, possibly due to venue limitations or logistical issues, an additional early setup fee will be charged as this can add significant additional time onto the ‘band’s working day. The 'extended performance' rates should be mutually agreed by the 'leader' and the 'engager' and should be assumed to be pro-rata unless otherwise specified. A full sound check can only take place once the whole band is present. If only a portion of the band are present for early set up then 30 minutes will be needed to sound check prior to the performance once the whole band is present. If the early set-up request is received after the contract has been completed and signed, there is no guarantee that the ‘band’ will be able to accommodate the request. If the ‘band’ is able to accommodate the request, the additional fee will be paid on the day of the event along with the balance outstanding.

During performances at festivals, clubs and venues, GAUDET generally performs one 45 or 50 min set. Again, the material is a mixture of original compositions and compositions written for the Gaudet Band. Set lists are customized based on the needs and requirements of the venue. We will perform covers upon request.

Set lists vary for each gig and will include the Grammy Ballot Album and Winner of the Academia Award for Best Pop Rock Album 'Wild Things':