Tribute to The Police "Message In A Bottle" 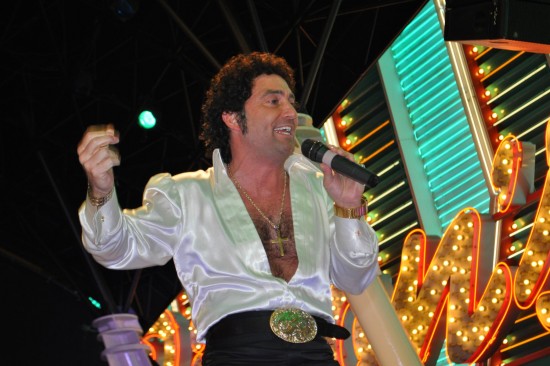 Garry Lichach founder of Bounty Enterprises, creator of Abbamania & Staying Alive tribute acts says this:
"Not only does he look like him, the voice gave me shivers down my spine! Plus Dave is an incredible entertainer. A huge stage presence, natural charisma that draws the audience in. This is the number 1 tribute to Tom Jones."

Wow - Dave is amazing, just amazing. His personality and kindness goes beyond a professional entertainer and he's talented. He had my party of 90 on their feet with ladies swooning at his side. My "gang" is a lively bunch and panties were thrown! It was a great time. Here I am dancing with Tom. You are really terrific and a great entertainer - thank you. Marietta and Larry.

Do I need to say anymore? Okay - I do, just because he is so frickin' awesome. Saw him for the first time at The Old Mill as Elton John and Tom Jones - also had Rod Stewart and disappointed that Joe Cocker did not make his promised appearance. That being said, Dave is amazing - if you close your eyes and listened - you won't think he's an impersonator - hit every note of every song perfectly. Can't wait to see him perform again. Where do I find a list of your appearances??

We had Dave at our Family 80th Birthday party for our Mom. He did a Fantastic job. Dave was everything you site says and more. Thanks!

I can't say enough about Dave and his surprise performance at my brother's wedding. He stole the show! His vocals were terrific, his stage presence masterful, and he worked very hard to accommodate me for this date. Couldn't say enough good things about him!
One of the bridesmaid's mothers wanted to throw her panties at him!
HAHAHAHA!

Saw Dave at Stage west and I thought he was incredible.

Dave is a good friend to my husband and I and he D.J.'d our wedding back Sept 30 2011 also DJ'd our Engagement party prior..
We have seen Dave perform at Kareoke and also live on stage. He is absolutely fantastic, he is Tom Jones when you see him its like looking at the real person. Dave you are so talented and my husband and I are so honoured to know you and have you as our friend. Keep up the good work hon.

First time I ever heard Dave La Fame, and what a fantastic show. Close my eyes, and thought I was listening to Tom Jones in 1970. remarkable..he is Las Vegas material to a T. Beautiful voice, handsome & hauntingly a "tom Jones" look a like, & entertaining.

Genuine replication of Tom Jones voice, appearance, performance & stage characteristics in his mid 1970's heyday in tight high trousers & open shirt, to the 1990's toned down with suit but open shirt (this is the recommended look for a general audience) & 2000's with shorter hair & goatee.

He is available for audience meet, greet & photographs at every performance.

Dave’s entertainment career began in London, England over 30 years ago as a young teenager, playing bass guitar and singing with various bands.

In 1981, looking for a way to "keep himself out of trouble", a friend persuaded him to audition for a London stage production of the musical Grease. Considering it bit of a joke & expecting to be thrown out, to keep the friend happy he auditioned anyway. He didn't get thrown out! In fact he landed the 2nd leading male role in show: “Kenicke”!

In 1984 armed with $500, a suitcase, ambition & street smarts; Dave moved to Canada. Full time work in the entertainment industry was not forthcoming. So for the next few years Dave worked in direct & retail sales. Selling everything from door to door vacuums & soda machines to new & used cars. Achieving success in several of these fields lead to promotion & management.

But the call of entertaining was too much. By 1990, Dave had returned to the theatre as an actor/singer. The addition of television & film roles, playing bass & singing with bands live & in studio. Singing “Oh Canada” at gala events, all meant that entertainment was now his full time profession.

When the recession hit the entertainment industry hard in 1991. TV, film & theatre work was scarce. However, the latest craze in the bars & clubs was karaoke. Starting first as a host for a busy firm. What started out as a means to make extra money, became Dave's full time gig. With a huge regular following Dave eventually started his own business. Using the name Bulldog Productions. Expanding later to include corporate disc jockey & audio video services. Bulldog Productions is very well known in the Toronto area & retains a very loyal corporate client base after 18 years.

In 2000, with Bulldog providing a comfortable & secure living. Dave decided it was time to return to life as a full time entertainer & musician. Originally sold to Bulldog's corporate client base, he produced a self-titled one-man show featuring comedic impersonations of music’s biggest stars. From Frank Sinatra & Elvis to all three Bee Gees & Freddie Mercury. In fact, over 200 different personalities!

After one performance, an agent made a comment that his “... Tom Jones was so bang on ...” that he should expand it into a serious stand alone tribute. And so it began.

Dave La Fame is now considered as one of the top 5 Tom Jones impersonators in the world. With a huge & growing following.

The popularity of both these shows, takes Dave to theatres, casinos, cruise lines & corporate events throughout Canada, the United States & around the globe.

Stage plots & technical requirements available upon request.
Dave is committed to keeping his reputation as someone who is incredibly easy to work with when it comes to sound & light technicians.
He is affiliated with several technical suppliers including his own (link hidden)ese can be booked through him upon request.
For international bookings requiring the use of local musicians. Local AFM or similar competant musicians will be provided with charts & audio arrangements. On these occasions, (though not mandatory) Dave's preference is to travel with his own Musical Director.

Up to 90 minutes of material is available in both live band & track format. songs available:
Delilah
It's Not Unusual
Green Green Grass
What's New Pussycat
She's A Lady
I'll Never Fall In Love Again
Sex Bomb
Kiss
I Who Have Nothing
Till
Without Love
You Can Leave Your Hat On
Just Help Yourself
Daughter Of Darkness
Love Me Tonight
Hard To Handle
Venus
If He Should Ever Leave You
Are You Gonna Go My Way
Mama Told Me Not To Come
Burning Down The House
Spanish Eyes
After The Loving
Quando Quando Quando
.... and many, many more. if you do not see your favourite song here, just ask and you shall receive!