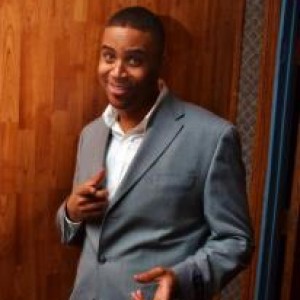 I'm professional comedian with over 15 years in stand up comedy who've been on national televison shows such as "Bet" Comicview, "HBO" Bad Boys of Comedy, and "NBC" Live in Hollywood. I won the 2008 Bay Area Comedy Competiton in Oakland Ca, and tours all across the country headlining main stream comedy clubs such as: Jokes and Notes(Chicago) Uptown Comedy Corner(Atlanta)FunnyBone(Columbus, OH) Improv(Hollywood, FL) I'm flexible with my stand up that allows me to provide material for ALL audiences from young to old, and from urban to corporate. Look no further if you're looking for a professional comedian who will bring tears of laughter to your event!!!

Be the first to review Courtney McGriff

My audience can expect non stop laughter of up to 60 minutes of clean or urban material.

McGriff was born and raised in St. Louis, MO. In 1995 he started off doing
stand-up comedy in local clubs in his area, no longer than six months, McGriff
was labeled a very gifted young comic, his blend of various humor observations
and non-stop laughing performances have helped his career grow and put him
ahead of the line. Despite his youthful appearance, McGriff has the privilege of
already being a comedy veteran with over 16 years of stand-up comedy
experience, McGriff is well respected by his peers and Industry
professionals alike.

After being in the comedy field for over a decade now, McGriff is still labeled
“Outrageously” funny. McGriff has been hailed as one of the funniest comedians
working today, he is winning over audiences with his outstanding “catchy”
phrases and has the ability to cross boundaries with his comedy, the flexibility of
this comedian allows him to present a performance ranging from clean-cut to adult
oriented material. The universal appeal of his material makes him a perfect choice
for all kinds of groups. McGriff has been racking up road mileage since 1996,
headlining gigs all around the country at several night clubs, Theatres, and Universities.

McGriff has enjoyed having the opportunity to tour overseas to entertain the
military troops in Japan, South Korea, and Frankfort Germany, he also toured with
Mike Epps, Sommore, Joe Torry and several other well known national comics,
McGriff made his first national Television debut in 1999 on Bet’s Comicview and
since has returned for five additional seasons, he also performed on P.Diddy’s Bad
Boys of Comedy, Live in Hollywood, and two local television commercials,
In 2008, McGriff filmed a independent movie called “Streetballers” and in that
same year he used his unique cadence, expert timing, patented facial expressions
and that one of a kind chirp that punctuates his hilarious punch lines and confidently
took the stage and the $5,000.00 grand prize as the winner of the Bay Area
Black Comedy Competition and Festival at Oakland’s Paramount Theatre.

I have worked with several well known comedians in the Industry such as: Mike Epps, Bruce Bruce, Deray Davis, Kevin Hart and more...