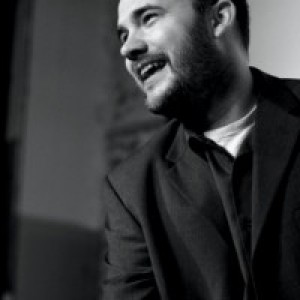 BradChad has lived many lives which inform his comedic sensibilities. He has worked as a teacher, a minister, a salesman and for a brief stint the caretaker of a cemetery.

Comprised of rich stories and observations delivered with intense conviction, BradChad’s comedy speaks to the righteous anger and frustration within us all, a response to a world that just doesn’t work like it should.

He has worked comedy clubs, bars, festivals & colleges across the region. His act ranges from PG-13 to Hard R rating.

Be the first to review BradChad Porter

BradChad's act is a high energy affair. It can be loud and fast at times, but it always remains sincere.

BradChad Porter was the first baby born in Sulphur, OK in 1977. BradChad never really fit into that small southeastern Oklahoma town. It is a place where life moves slowly, and where Mtv is still not allowed on the cable dial. While his contemporaries were kneeling at the altar of athletics he looked to Father Guido Sarducci for salvation. While his classmates were emulating Nolan Ryan and Bo Jackson on fields of play he was practicing his Sam Kinison scream into the giant mirror on his parent’s bathroom wall. At age four he told his mother, “…when I grow up I’m gonna be on the Tonight Show with Johnny Carson, but Johnny’s not gonna be there…”

His route to the stand-up stage was not a direct one. BradChad has lived many lives which inform his comedic sensibilities. He has found work as a teacher, as well as a salesman, and for a brief stint the caretaker of a cemetery. Perhaps the most notable diversion from his path to stand-up comedy was the decade he spent working as a minister. He worked in this field as a Senior Pastor, Evangelist, and Youth Minister until he discovered as he put it, “[He doesn’t] know one person after 10 years in whose life organized religion has had a net positive effect.” After much soul searching BradChad turned to his first love, stand-up comedy, to make a career.

Making a living as a stand-up comic in Oklahoma is a tall order as it turns out. With only two comedy clubs within driving distance, BradChad, now a family man, had his work cut out for him when it came to getting stage time and attention. These geographic and personal obstacles shaped him into a “do-it-yourself” comedian. He was one of a handful of Oklahoma comics who met the desperate need for stage time by starting a weekly open mic comedy show at a club in Norman, OK. That show has now run for three years. Not content with open mics alone, he started his own weekly showcase/variety show called, Mondays Don’t Suck, at a bar in OKC, OK. That show has now run for two years. His independent spirit and strong work ethic have earned him the respect of audiences, comedians and club owners.

BradChad’s booming voice and deranged perspective on the world serves his comedy well. Through the twisting range of his material, and through his fresh and unique delivery, Porter has managed to open doors to perform in a diverse list of venues. From bars to theaters, comedy clubs to military bases, cross-town buses to video rental outlets, BradChad’s performances remain consistently amazing. Comprised of rich stories and observational comedy delivered with intense conviction, BradChad’s comedy speaks to the righteous anger and frustration within us all, a response to a world that just doesn’t work like it should.

BradChad is known for leaving lasting impressions on audiences. He has garnered a cult following among the after-hours crowd. Not only does this following look forward to every new idea that comes out of his mouth, but they have also memorized his best bits word-for-word and continue to enjoy them nonetheless. “BradChad is easily one of the best yet-to-be-discovered comics I’ve ever seen,” said Kelly Taylor, promoter of Bill Hicks Lives, a tribute showcase. “Brad is a master of saying stuff to make you say ‘Oh sh*t. That was f*ck*ng funny! Did he really just say that?” His act ranges from PG-13 to a hard R rating.

Currently, BradChad is working out of Oklahoma City, OK. He busies himself with a podcast, blog, acting in small independent film productions, and working as a founding member of a sketch comedy troupe, ”the Celibates,” all in addition to his stand-up comedy work.