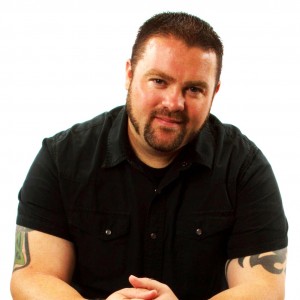 Lawrence, Kansas native Brad Ellis has been making a name
for himself as one of the hottest new comics in the Midwest.
His background as a U.S. Marine and former law enforcement
officer creates a solid foundation for his professionalism. Years
of work experiences continue to shape his unique view on daily
situations, while also being a major influence in his on and off
stage charisma.

Brad, is a prominent feature on the Kansas City scene, and works
regularly at both Stanford & Sons Comedy Club and the Improv
circuit. He is a reguler feature/Headliner at Stanford's Comedy Club as well as hosts their open mic night every tuesday.

Brad did a GREAT job - he showed up on time and was patient with us when our event ran a little behind schedule. Very adaptable and accommodating. We asked for a clean show, and he was able to provide that...and still be HILARIOUS! :) I would absolutely recommend Brad.

Thanks! Your event was great, crowd was amazing! You guys were more than accommodating, setup was great and fun for everyone! Look forward to working with you all again. What a great company of great people!

Brad Ellis is a professional and we would hire him back

I highly recommend Brad Ellis if you are looking for a professional comedian for a club show, college or any other occasion. Once you hire brad for your show or event you can be sure he will entertain your audience and make you look good as the event promoter. He is a very good communicator, shows up on time and is interested in your success for any show you put on.

I am happy to answer any additional questions and again, I strongly recommend Brad.