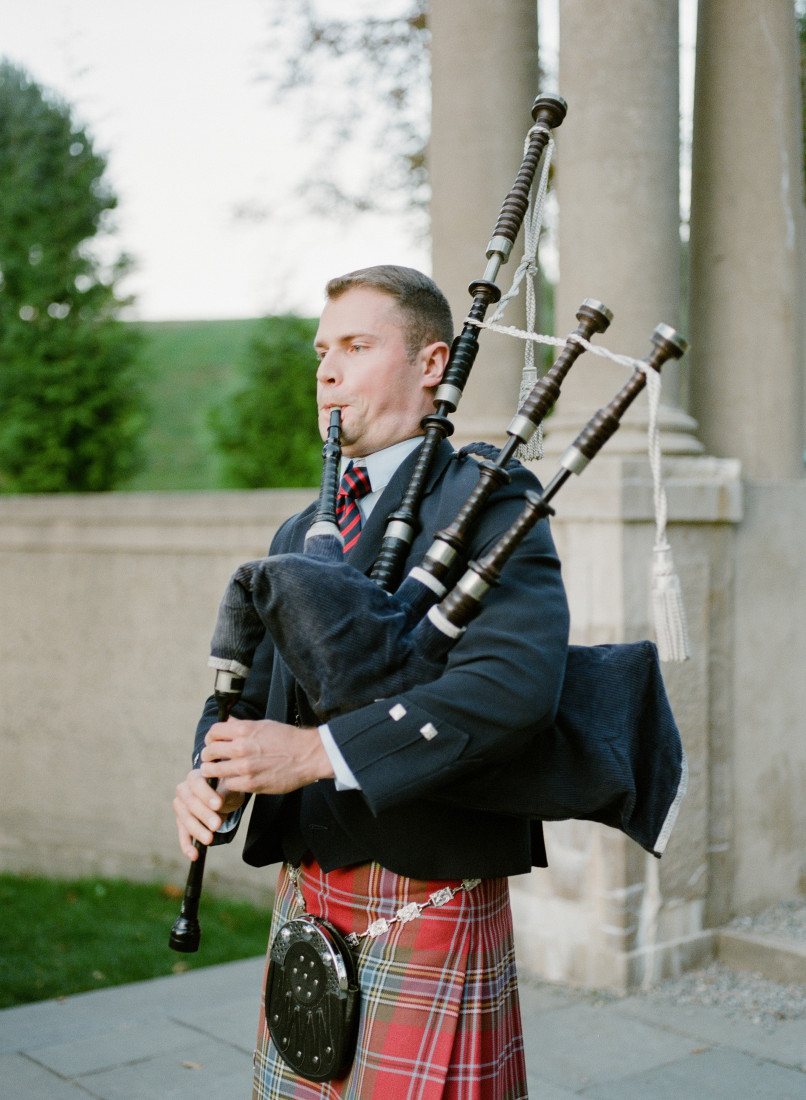 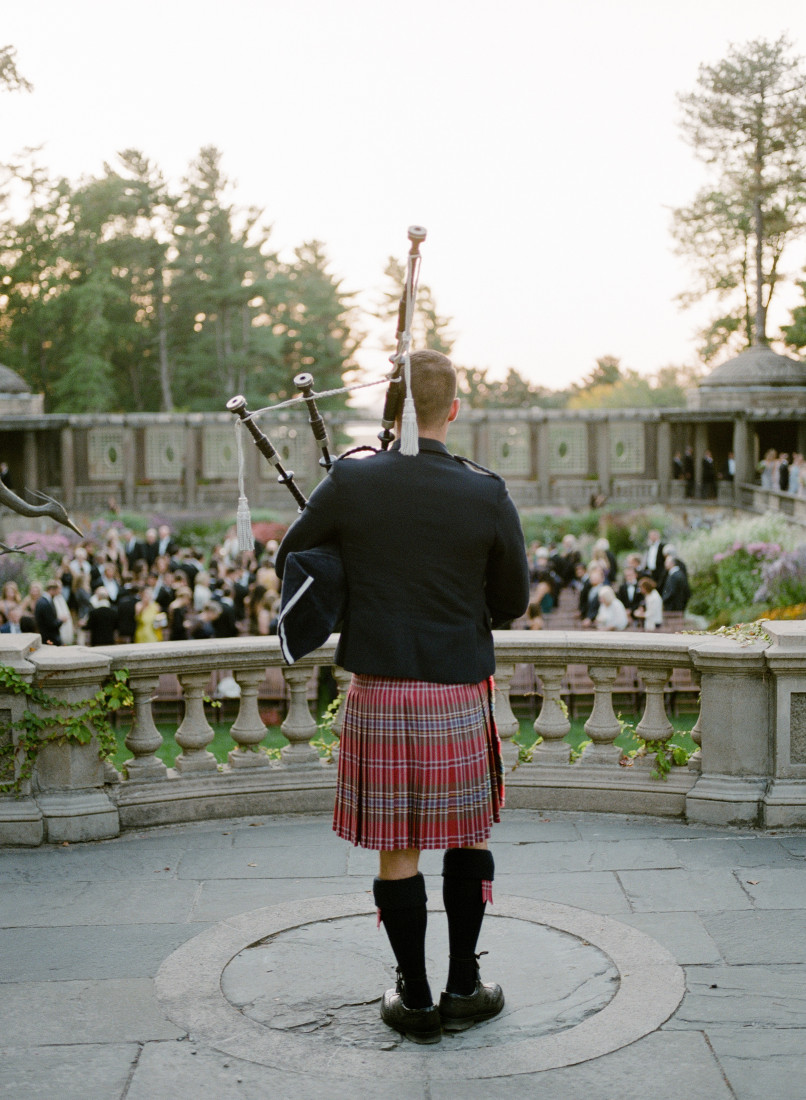 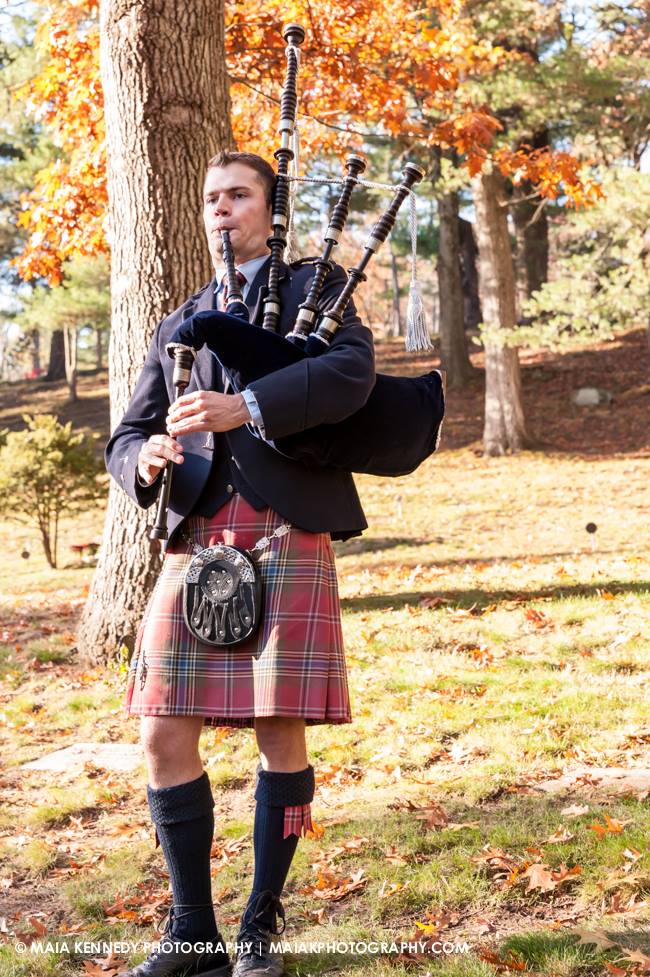 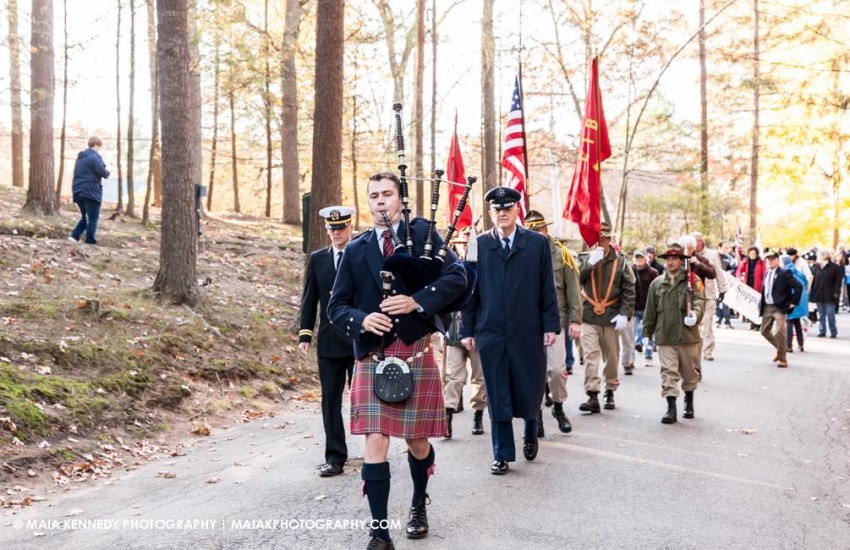 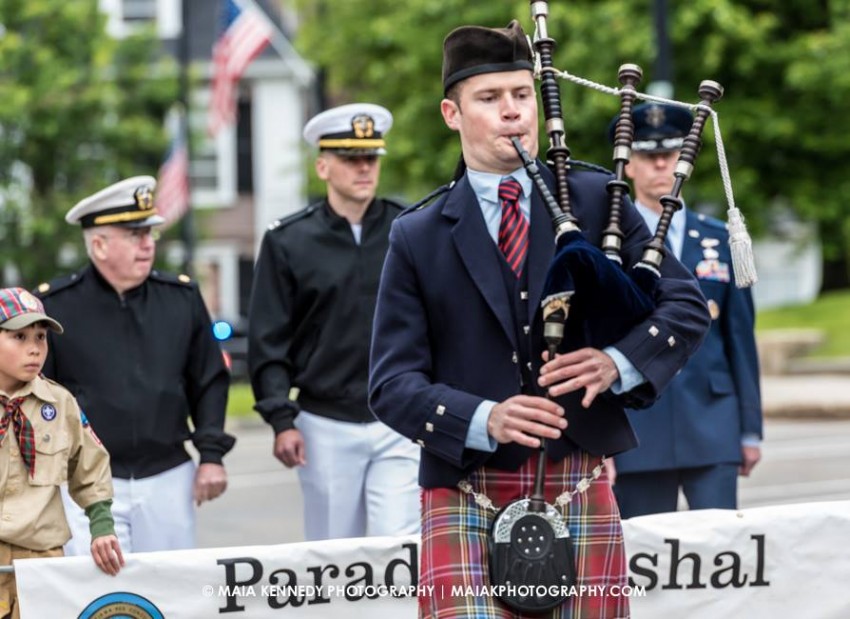 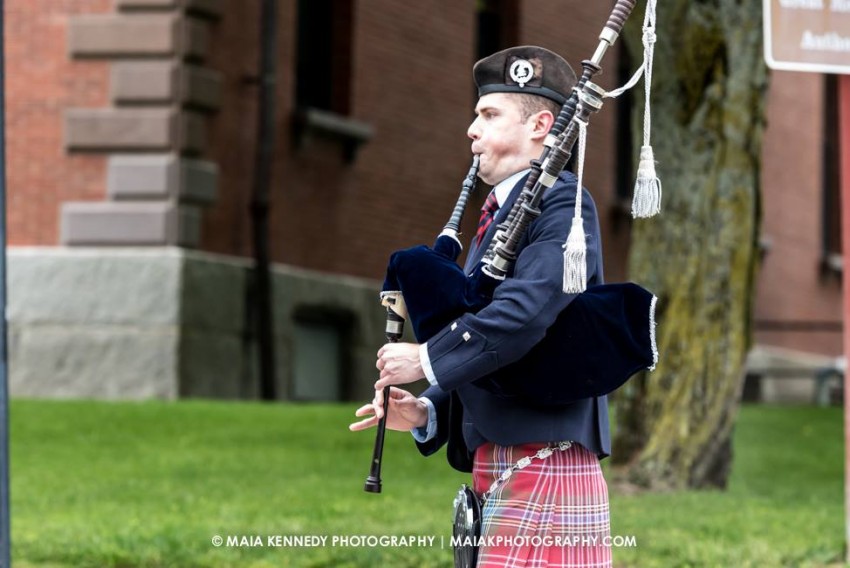 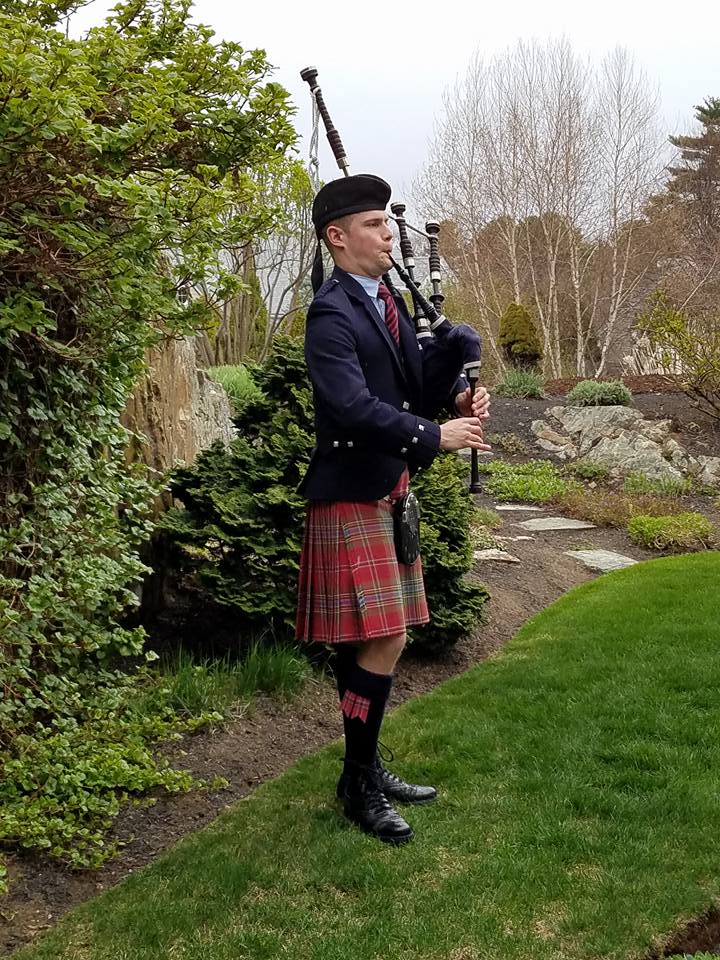 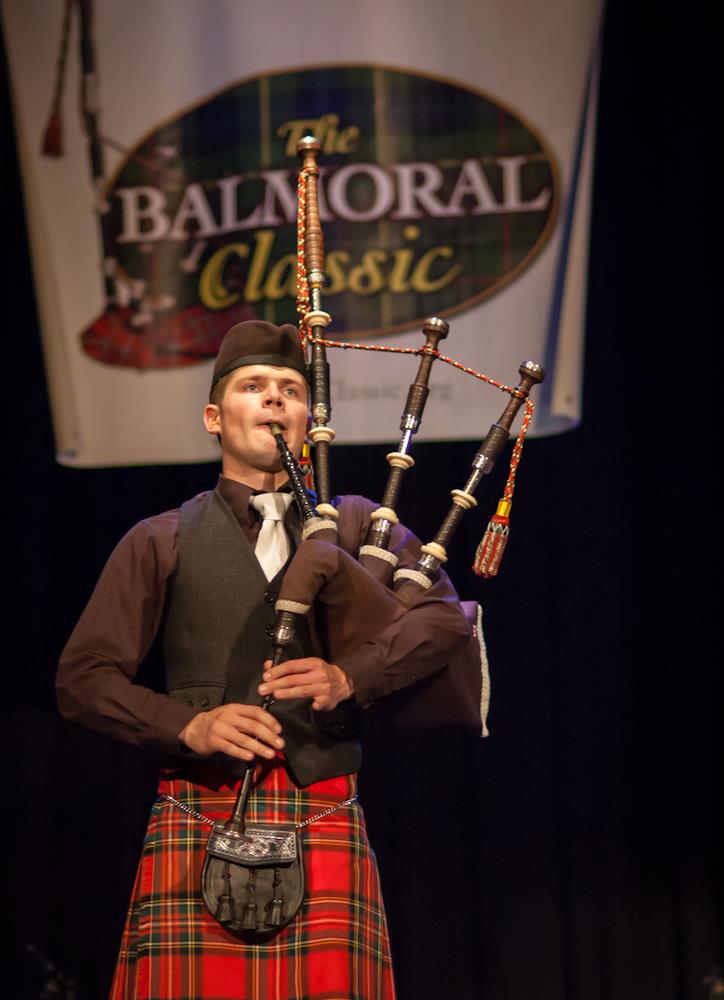 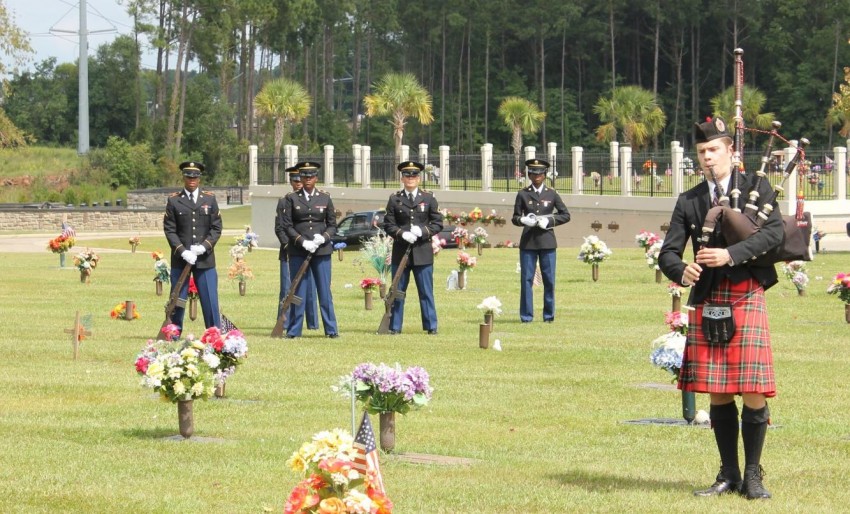 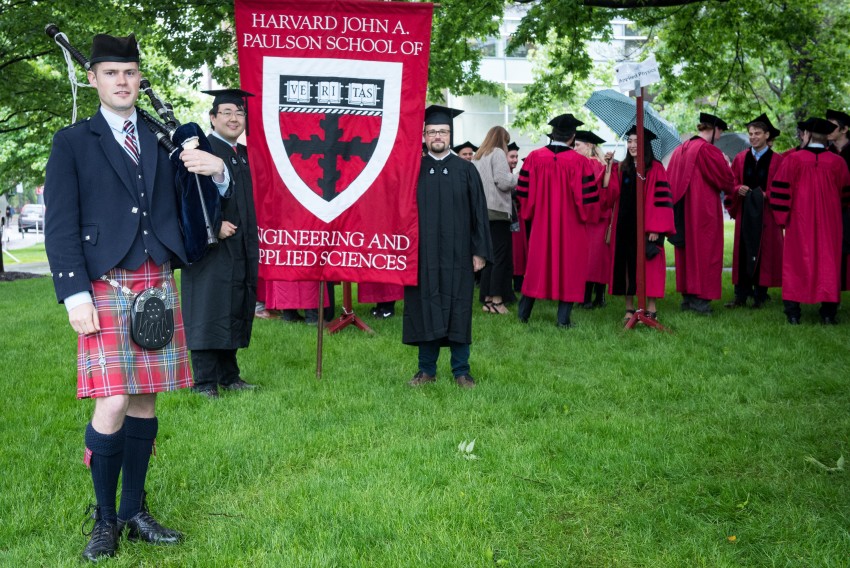 Premier bagpiper Kirk Brunson is available for weddings, funerals, and all other events in Massachusetts, Rhode Island, New Hampshire and Maine.

Kirk was a complete delight, and across the 3 generations of a marquee birthday, everyone was delighted with his playing, and a special treat was how open he was to share his knowledge. It made for a memorable day. Thank you Kirk!

Outstanding! Kirk was in constant contact with us and provided exactly what we requested. He was phenomenal! Thank you so much Kirk! You gave us joy in this difficult time.

Kirk was phenomenal! He was in constant contact with us and performed exactly what we requested! Everyone commented on his performance. Thank you so much for making this event so special during a difficult time!

I hired Kirk to play at my husbands 50th bday as he loves the bagpipes. We surprised him with this and it was a big hit. He is very talented and personable. Thank you helping to make the event a perfect celebration.

Hired Kirk for my son's wedding . Kirk was nothing but professional. Played the pipes before and after the ceremony.

Great addition to the party!

Kirk was great, easy to communicate with prior to the event, on time and very talented. Everyone enjoyed the entertainment and he couldn't have been nicer!

Kirk did a great job at my mothers 80th birthday party! She loves the bagpipes and having him play while she entered her surprise party was an amazing moment in time. Thank you for making this day a huge success!

It's obvious why Kirk Brunson has won awards at competitions. He is one of the finest bag pipers I've heard in the 70 years of my life. Kirk responded online to all of my questions. He recommended the Boston Highland Dancers to me when I asked his opinion--and they were wonderful. In short, he made of our gala the stylish, fun Scottish affair we intended. I highly recommend him!

Kirk played the bagpipes for my mother's graveside service.

Thank you for your professional service. You were prompt and accomodating.

He was great, an awesome performer, gave everyone a great time.

Kirk is super professional to work with!

Kirk was the man! Punctual, stayed in contact and really enjoys what he is doing, it is apparent. Great job, Kirk, see you again next year for St. Patty's.

A good time had by all

Kirk was great. On time, played great, guests enjoyed and got pictures with him before he left.

Thx, Kirk for you wonderful playing at my Dad’s service. You were helpful, flexible and made the day even better than we imagined. Highly recommend Kirk for all bagpiping events!

Kirk was great. He worked with us the whole way and had some great suggestions. I would recommend Kirck to anyone looking for a bag piper. I will surely bring him back for any other evens we may have.

Kirk did a great performance everyone there also were very pleased.

Great performer with the perfect touch for any event.

Kirk is a fine lad and a most talented piper. He adds so much to any event, in this case a remembrance of my brother. I also had a key board player/singer and Kirk never missed a beat in joining in and when playing solo. No event is ever complete and memorable without such fine music to lift one's spirits. I highly recommend Kirk.

Kirk was so flexible and communicated with us throughout the planning of my mother-in-laws funeral. Even when I didn’t have all the concrete information until late he was understanding. He was dressed impeccably and played so well and exactly as expected. Thank you for making the cemetery portion of my families experience beautiful.

Kirk was very professional and accommodating. He made our awards presentation very memorable and special to the honoree and his family. If Kirk is available, book him! He is fantastic!

Kirk was excellent with communication. His vast repertoire included the songs we requested. He showed up on time and delivered flawless renditions of the requested songs, which made the burial service even more poignant.

Kirk was so accommodating and worked with me to make the funeral of my brother in law most memorable. Thank you Kirk.

Kirk was absolutely flawless. He made some great suggestions for background music as people trickled in, and did an incredible job with the music for the event. My dad, who is a piper himself, didn't know you could actually play Greensleeves on the bagpipe. We are all extremely impressed and very happy with Kirk as a musician and as a performer.

An amazing musician and performer!

Kirk was very flexible about song selection and some changes near the last minute. He looked flawless and did an amazing job for us from start to finish. I highly recommend him as a piper and would hire him again in a second!

everyone loves a bagpiper

Saint Patrick's Day in Boston .... the bagpiper was a tremendous hit!

Kirk was great to deal with, showed up right on time, and was very personable. His playing was great, and made it a very memorable party.

Kirk was the BEST!

I have nothing but superlatives to describe our experience with Kirk. He was on time, prepared, charming, played beautifully, played even more than I expected, and played for an impromptu dance. I would definitely hire him again and several of my guests obtained a business card of his for future reference.

Kirk's performance could not be improved. He was early to the event, played when asked and even played extra pieces. Everyone in attendance appreciated his playing very much.

Kirk the NHBagpiper was simply outstanding at my event. He showed up right on time and was so accomadating to our music choices. We will definitely hire him again.

It was great, l would hire Kirk again in a heartbeat.

Kirk Brunson was the bagpiper for my event, he was right on time, and was great. Kirk played for about half hour, mingled with the guests, posed for pictures, answered questions, and played requested songs. It was the perfect venue for my party.

I didn't tell anyone that I hired a Bagpiper, so this was a big surprise for everyone and and they just loved it.

My best friend is moving from NH to FL. Her husband just loves bagpipers. I thought it was the perfect gift for him, after putting up with us for all these years.

Kirk played at my aunt's memorial service at the cemetery. He was on time, polite, and completely professional. His skill level as a musician was excellent and professional (and we have music teachers and professional musicians in our family who thought he was outstanding). Kirk played beautifully and, moreover, was able to play all the special requests we made. His Scottish attire was authentic and meticulous. He was a joy to work with and we highly recommend him. We will definitely call upon Kirk should we be seeking a bagpiper in the future.

Kirk came to our party celebrating our father, he was on time played wonderfully and whatever we asked was not refused. I highly recommend Kirk.

Kirk Brunson provided bagpipe music at the cemetery before and after the burial rite for my mother-in-law and father-in-law. He played Danny Boy and Amazing Grace beautifully. He was professional and easy to work with and was a very special part of the day for all of us.

Extremely professional and talented bagpiper. Added so much to the service that it's hard to put it all into words.

Fantastic bagpiper for our wedding!

Kirk really added a special touch our wedding. He played as guests entered the ceremony site, the processional and recessional.

All communication with Kirk was very prompt and professional. He even let me throw out some requests, and had no problem accommodating them.

A special touch that I wasn't expecting, but absolutely loved, was that he led me and my father down the aisle. It was so unique, and was very happy the he did that.

Kirk will definitely add a special touch to your event that your guests won't soon forget! I can't recommend him enough!

Kirk Brunson began playing the bagpipes at the age of eight. He began lessons with Pipe Major Adam Holdaway and has continued studying by taking lessons with world renowned bagpiper Willie McCallum. In this time Kirk has progressed to the professional level and is one of the premier bagpipers in the USA.

He has also played with a number of pipe bands throughout his career. Kirk began with the Stuart Highlanders and played with them 2006-2013 as they rapidly progressed from beginner to professional now being New England's premier pipe band. In 2014, he joined the Dowco Triumph St Pipe band based in Vancouver, Canada and Glasgow, Scotland. They are ranked in the top 10 worldwide, and he travels regularly to perform with them.

He has also performed at events throughout the US, Canada, Ireland, and Scotland. Some of the events he has played for include weddings, funerals, memorial services, graduations, Robert Burns dinners, private parties, summer camp activities, and company events. Outside of performing, Kirk also teaches students, pipebands, and workshops on bagpiping.

If you have any questions about how a bagpiper can best compliment your event, don't hesitate to contact Kirk. He will work with you to assure that you achieve your goal. 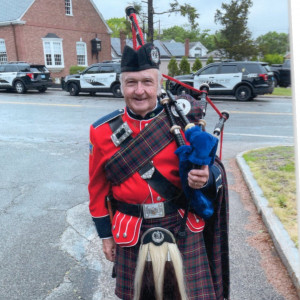 Liz P. said “Bob was just awesome! Michelle was so shocked and she loved the grand entrance when we walked in Bob was playing she had no idea what was happening. Thank…”

Donald M. said “Simply put, Nate was amazing and we want him back next year to play at our Marine Corp birthday party. Fantastic job Nate!”

Jackie M. said “He arrived on time, entered the garden and took the guests by surprise. Besides playing, he took the time to speak with the guests and answer their questions.…”

Robert M. said “75th Birthday celebration with 30 folks in attendance. Arthur Graham was terrific and the hit of the party and a terrific gentleman to boot!”