4.6
(4 reviews)
Get a Free Quick Quote
Add to Favorites 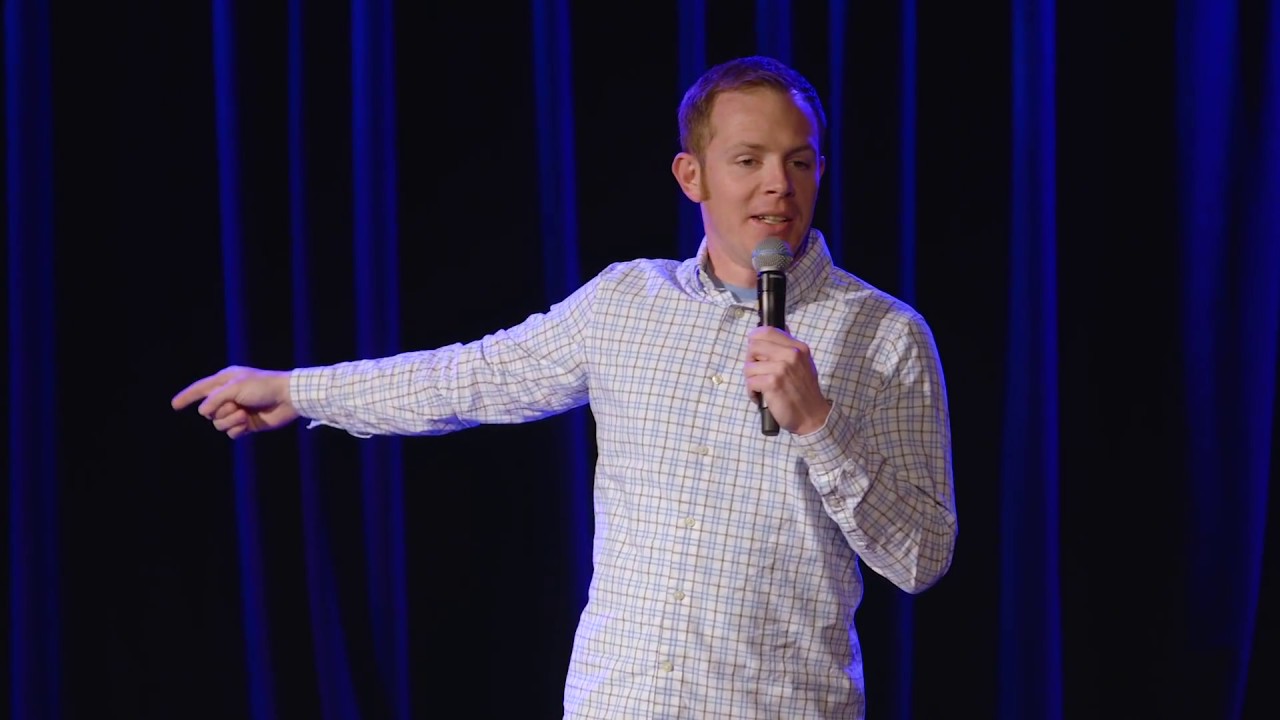 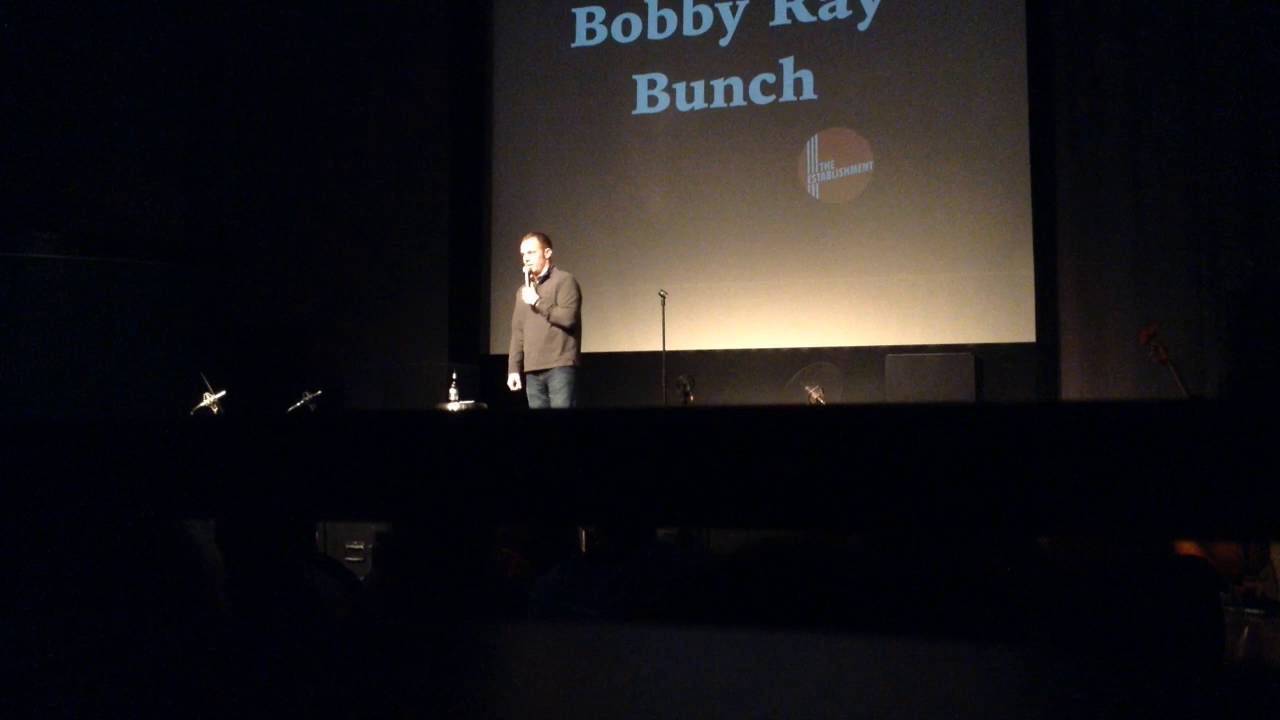 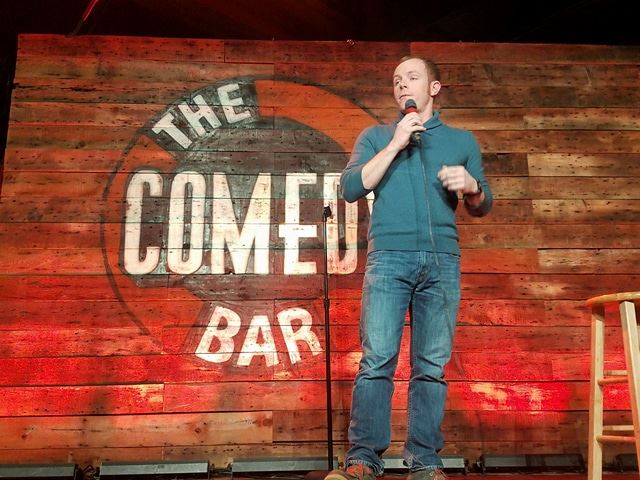 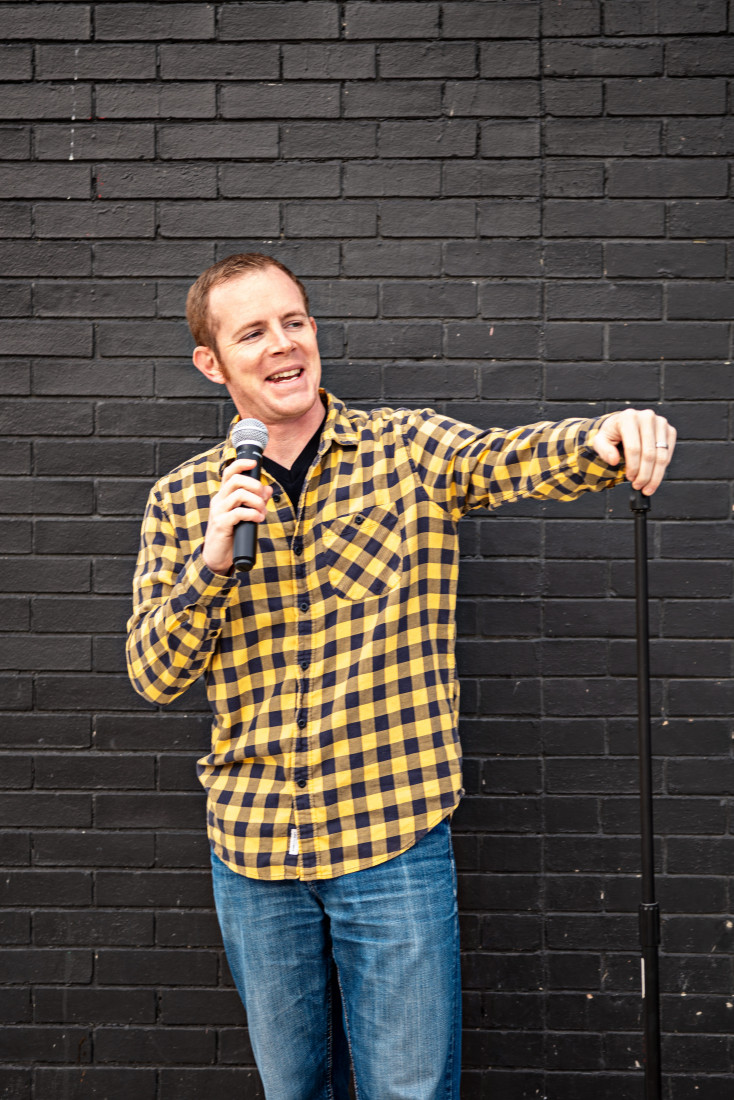 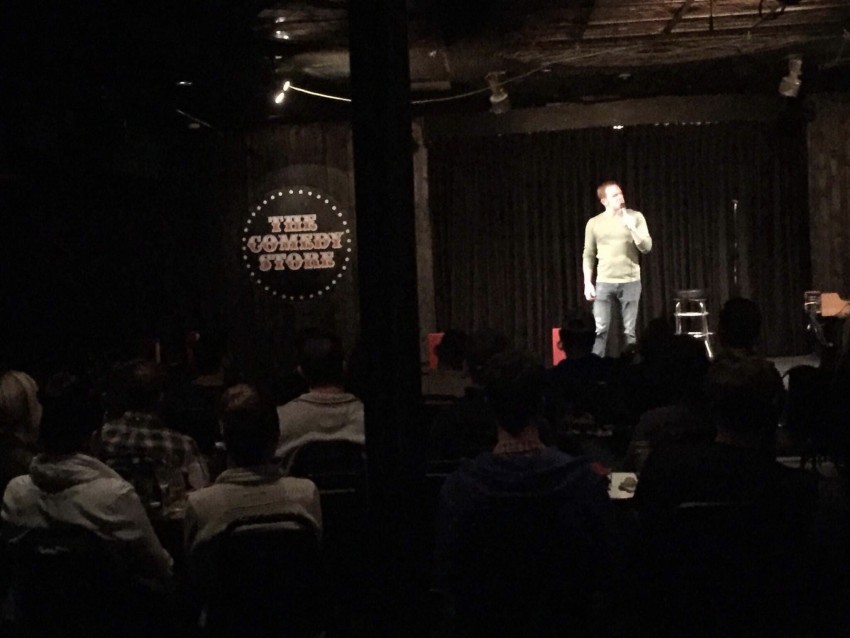 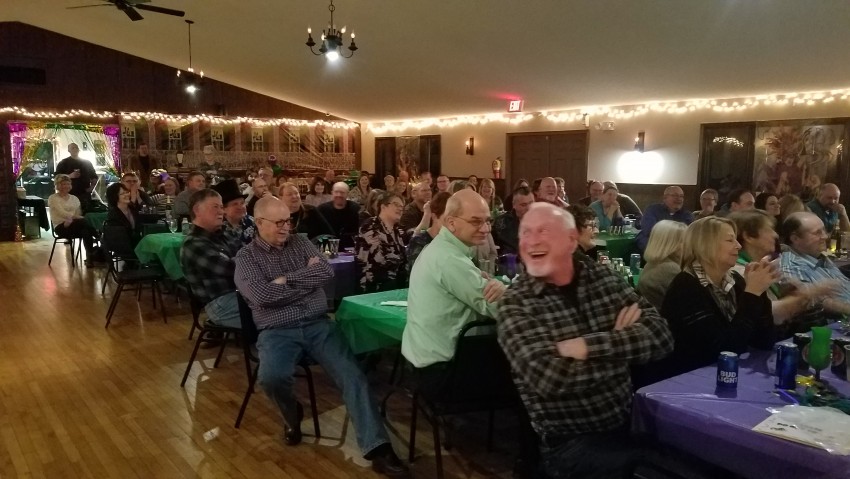 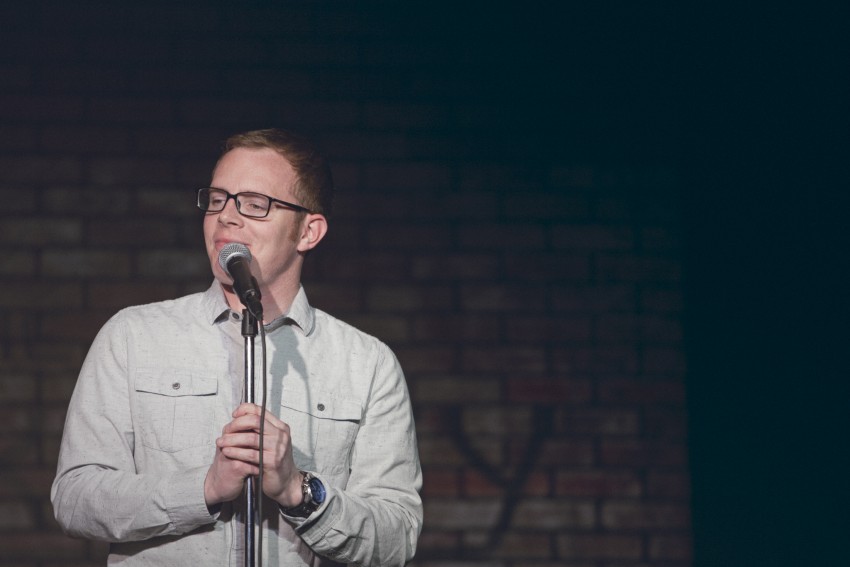 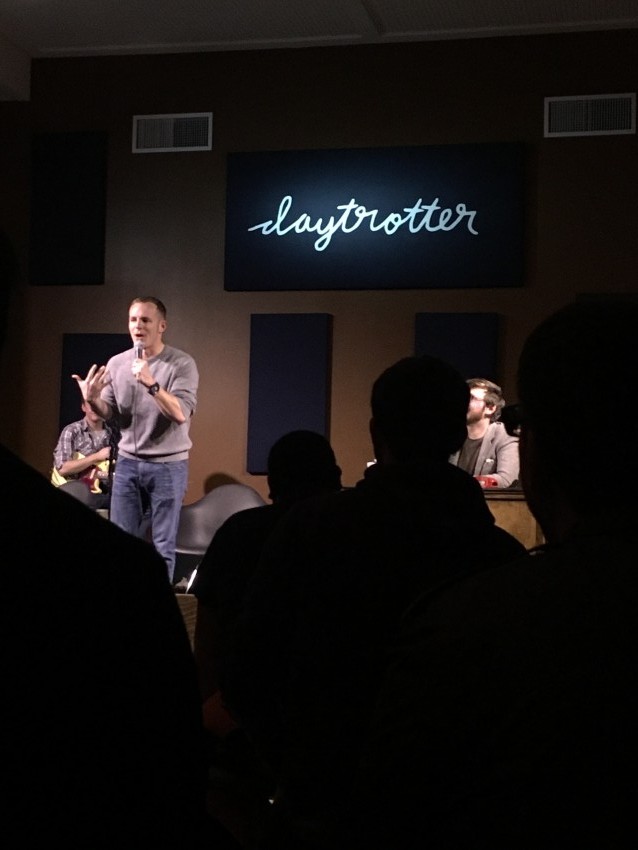 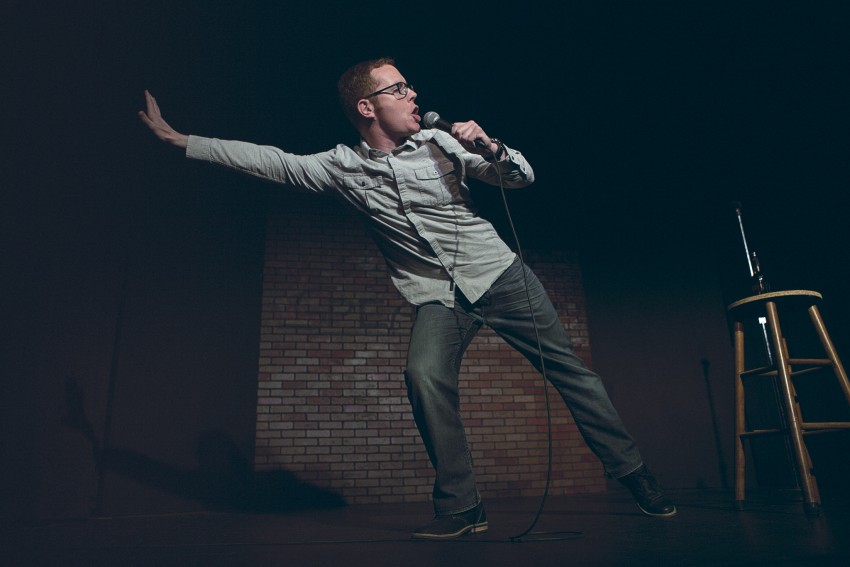 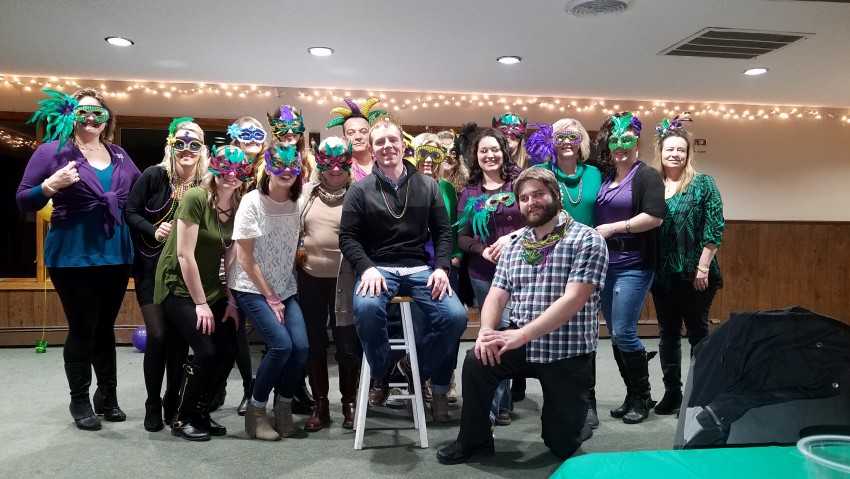 Posing with some of the crowd after a great corporate event outside of Marshalltown, IA

After proudly serving in the military, Bobby moved back to Iowa and found his way into comedy. Since 2010, Bobby has traveled the country as a professional stand-up comedian, performing at sold out theaters and clubs, casinos, corporate events and one time at a surprise baby shower (she was not surprised). His ability to adjust his comedy style and material to fit any audience makes him the perfect choice for your next event. His material revolves around his life, his time in the Air Force and everyday observations that leave crowds of all kinds laughing. He’s opened for acts such as Todd Barry (Comedy Central), Janeane Garafalo (HBO), Emmy Award winner Tig Notaro and ABC's Cristela Alonzo.

Bobby was amazing. Everyone was pleased with his performance. I have heard nothing but good comments from everyone. It was well worth the money spent. If we had to hire another comedian, I would be contacting him again. He was very polite and professional the whole time he was at our event.

Our company hired Bobby to do stand-up comedy at our corporate holiday party. Leading up to the event he communicated well and stayed in touch. He asked for ideas so that he could tailor material to our group. He was prompt and arrived on time to mingle with our group ahead of the show. He kept the material PG-13 for the corporate event and got a laugh out of everyone. If you are looking for an affordable, fun option for your next event I would strongly suggest you reach out to Bobby!

Bobby Ray Bunch was a hit at our party.
He showed up ahead of time and he communicated very well if I had questions.

Thank you Mark, Karen, Matt & Luke for having me! You were a pleasure to work with and best of luck with the upcoming racing season.

I had put this comedy act as a surprise for my wife's baby shower and Bobby went with the flow. He did not reveal anything till his act started...so my effort to surprise my wife turned out perfect!

Very professional artist. Arrived on time. Bobby also agreed to be an EMCEE and he did a great job by engaging the audience. Everyone in the audience were in splits towards the end, and had a great time. Bobby said this was the first baby shower where he performed, but he did a great job. I Highly Recommend Bobby for any stand up comedy opportunity. His rates are also very reasonable when compared to other quotes. In any case, you will probably not remember the money you paid...but you and your guests/friends will definitely remember the FUN you had...

Good Luck Bobby for all your future events!

Thank you! It was my pleasure to entertain your friends and family!

Bobby's ability to cater to any audience makes him a great fit for whatever your event may be. From fundraisers to award banquets to more intimate settings like luncheons and birthday parties, Bobby has seen it all. He works with his clients beforehand to ensure he brings the type of performance they are looking for. His act can be all-ages or just for the adults, that depends on you!

Bobby Ray Bunch tried stand up comedy for the first time at his high school talent show. He placed second in the competition, but fell in love with the thrill of stand-up comedy. After high school he joined the US Air Force where he served almost six years in Security Forces. He was stationed in England, Spain and worked for Air Force One in Maryland.

After Bobby completed his service to his country, he moved back to Iowa to pursue his college education. Immediately, he found his way on stage and never looked back. His grades suffered, but he didn't care. Eventually Bobby graduated with a degree in International Studies with a minor in Spanish.

While maintaining his presence in the comedy world, Bobby tried pretending he could have a normal job with normal people. Apparently, you can't just say whatever you want to whomever you want which led Bobby back on the road doing what he loves. He's been on stage at The Comedy Store, multiple comedy festivals, too many casinos and anywhere with a microphone. He's shared the stage with some of his favorite comedians such as Todd Barry, Tig Notaro, Janeane Garofalo, Cristela Alonzo and Josh Blue.

Bobby also performs as a solo acoustic musician, playing renditions of everyone's favorite songs like Wonderwall...and...well, that's the only song that matters. He's played all over the Midwest at places like the Anheuser-Busch brewery in St. Louis, MO, the main stage at TugFest (Google it) and at wineries, bars, restaurants and private events.

Bobby resides in LeClaire, IA with his girlfriend and their stupid dog.

The closer the tables and chairs are to the stage, the better for everyone! Lighting and sound can sometimes be out of your control, but is important to go over with Bobby before the event. He will work with you on making sure you have what you need for a great comedy performance at your event.

Jennifer G. said “Jeremy was very pleasant to work with, met every contractual agreement and offered above and beyond. Our audience age range was broad, children to adults,…”

Roberta G. said “We would like to extend our thanks to Tony for entertaining our employees at our annual Service Recognition Banquet. It was important to us that our entertainment…”

Joanne W. said “Our company hosts a monthly event at local restaurants. We selected Ryan as our Guest Speaker and his presentation was absolutely perfect. Our group is…”

MIKE FOUNTAIN here! I am a Comedian, Actor, Improviser, Friend! ready to make you laugh and entertain you. I want to Perform/Coach/ or EMCEE/HOST your event! Folks…