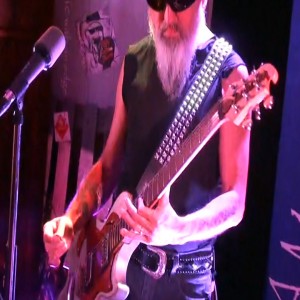 With quality sound and lighting equipment (including sound activated lights), as well as a stage background, Bruce brings a concert experience to your next event!

A Man Called Bruce plays original Roots, Rock and Blues (no covers). His music owes much to the rock influences of The Allman Brothers, The Beatles and other classic artists. But, you can’t deny comparisons to The Black Keys, Jack White, and Gary Clark, Jr... just to name a few.

Be the first to review A Man Called Bruce

A Man Called Bruce is a songwriter who performs his original music including Americana, rock, country and folk songs. His presence & appearance is unique. His songs are mostly story driven about love, loss, renewal and the human condition. The message of his songs is generally positive.

Bruce is not a dance hall performer. His concerts are similar to what you might experience with artists like Bob Dylan and other solo performing songwriters.

In 2012, Bruce embarked on a cross-country tour which saw him perform in places like Charlotte, NC; Nashville and Memphis, TN; Oklahoma City, OK; Albuquerque, NM; Phoenix, Tucson and Tempe, AZ; Seal Beach, CA; El Paso and Austin, TX. In 2011, he performed at CSA's first Songwriter's Festival, sharing the bill with nationally known hit songwriter Roger Alan Wade and Nashville hit-maker Steve Bogard, who wrote the song 'Every Mile A Memory' for Dierks Bentley, as well as hits for many others.

PA equipment suitable for small rooms up to appx 50 persons. This can also be used for "street performances" where no electricity is available.

If performance is in a room seating more than 50 persons, PA or sound system required. Lighting must be suitable for audience to see performance.