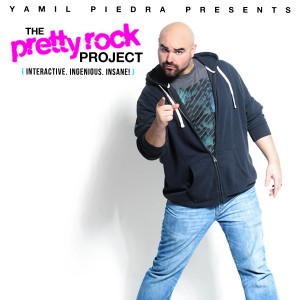 Looking for something cool and completely different for your next event? Want to get the audience up on stage as part of the action? Then look no further than "The Pretty Rock Project!" It's interactive. It's ingenious. It's insane! Recently awarded "Best Comedian" by the Miami New Times, Emmy Award winning comedian Yamil Piedra presents this interactive comedy show that allows the audience to not just sit and watch the show, but get up be part of the action!

We booked Yamil for a private event and were very glad we did. He was extremely funny and everyone came away laughing and talking about his comedy. I would highly reccomend him for any event large or small. Very good entertainer.

The entire audience gets a chance to be part of the show with Yamil's integration of social media. Using Twitter in a bit called "Up Close with Yamil Piedra," Yamil selects a lucky (or unlucky) audience member to interview using questions tweeted to him by the audience. Top this all off with hysterical short videos that Yamil uses in between bits and The Pretty Rock Project is unlike any comedy show you've ever witnessed. Having been named "Best Comedian" by the Miami New Times in 2013, Yamil is sure to make your next event an unforgettable one!

Standing at 6’4 & using his serious demeanor to great effect, Yamil has captivated audiences with his unique style of comedy since 1997. He has taken part in several stand up comedy showcases including Comedy Central’s Open Mic Fight, NBC’s Stand Up for Diversity, & Just for Laughs. His television credits include Boston Legal, Las Vegas, Burn Notice, Last Comic Standing, BET Comic View, Tosh.0, Last Call with Carson Daly, VH1's Money Hungry, & USA Network's Graceland. His online videos have acquired millions of hits & have been featured all over the internet.

Originally born in Havana, Cuba, Yamil arrived in Miami at the age of 2 by way of the Mariel boatlift in 1980. A graduate of Florida International University with a BA in Theatre, Yamil is currently bilingual & lacks the ability to bend his right thumb.

(Price varies according to type of show requested. Contact me for more information.)