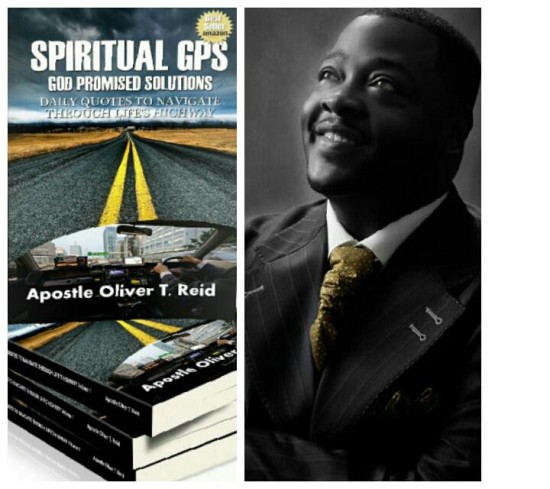 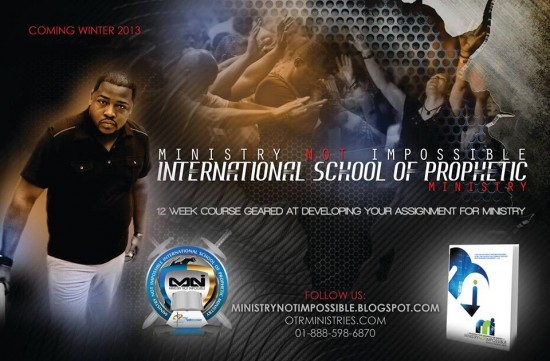 Oliver T. Reid is happily married and a proud father. Reid obtained Master’s Degree in Theology from Life Christian University. Reid has served in numerous capacities, among them, Campus Minister at Winston Salem State University from (link hidden)ated International Ministries, where he served as Senior Pastor. Reid launched Oneness Through Redemption Ministries International in 2009 to consolidate his multiple resource networks. Reid is a seasoned Ministry Coach, Author, Motivational Speaker, and Trainer. His Bestselling book Spiritual GPS, was released in 2013. Reid has developed a series of explosive empowerment workshops and conferences. Reid has over 20 years of ministerial experience.

Be the first to review The Solution Coach

Reid has developed a series of explosive empowerment workshops and conferences. These practicums and summits facilitated by Apostle Reid are specifically handcrafted to transcend cultural boundaries by heightening the spiritual, emotional, and mental well-being of its participant’s. Oliver T. Reid offers a variety of explosive workshops specifically handcrafted to transcend cultural boundaries, and heighten the spiritual, emotional, and mental well being of its participants. Workshops are designed with you in mind and can be tailored to the needs of your specific church, ministry, business, and organizational body.

We are a global outreach ministry with a holistic approach and viable entity of Seated International Ministries Incorporated. We are geared and aimed to evangelizing the secular and Christian circuits. O.T.R. Ministries International focuses on bringing individuals of all races, cultures, ages, and nations to the saving grace of our Lord and Savior Jesus Christ. Equipping and perfecting the Body of Christ through practical and fundamental networks inspired by the teachings of God's Word.
Apostle Oliver T. Reid, called into the ministry in his youth, is a powerfully anointed and dynamic man of God. Known to be a remnant preacher and a testament to these times, Apostle Reid flows with a global prophetic mandate with God’s signs and wonders following. A man of many gifts and talents, he walks in the office of Pastor, Prophet, Evangelist and Teacher, and most affectionately knows him as “Apostle.” As a trailblazer, stalwart, and international apostle Reid has a passion to see the body restored, sinner’s saved, and broken hearts mended.
Apostle Reid has served in numerous capacities, among them, Campus Minister at Winston Salem State University from 1996-1999. In 1996, Apostle Reid founded Youth with a Fire Ministries (YWAF) in North and South Carolina and in 2005 he established Seated International Ministries, where he served as Senior Pastor. Apostle Reid served as Assistant Pastor of Grace Tabernacle Deliverance Ministries Inc. for 10 years. Apostle Reid launched OTR Ministries International in 2009 to consolidate his multiple resource networks. Prophet Reid has over 20 years of extensive ministerial experience.

A native of Charlotte, North Carolina, Apostle Reid is happily married to Miatta Reid and a proud father. He is a graduate of Winston Salem State University with a BA/BS degree in History and Sociology. Apostle Reid obtained a Bachelors as well as a Master’s Degree in Theology from Life Christian University. He is presently in pursuit of his Doctor of Ministry in Theology degree from Life Christian University.

Apostle Reid has used God’s blessings and favor upon his life in the marketplace, as Founder of ECKLESIA Professional Development Center in 2001 and Founder of M.I.N.D. Consulting firm in 2007, providing mental health and consulting services. He is also a seasoned Consultant, Trainer, Motivational Speaker, Writer, and Poet. His first book, DON’T PRESS FAST FORWARD, was released in 2010. His next four widely anticipated books: Spiritual GPS, Your Ministry Is Not Impossible, Nine Keys To Keeping A Vision Fresh, and Words From The Low Place are due to be released in the near future. Using his God given passion to teach, Apostle Reid has developed a series of explosive empowerment workshops and conferences. These practicums and summits facilitated by Apostle Reid are specifically handcrafted to transcend cultural boundaries by heightening the spiritual, emotional, and mental well-being of its participant’s. Yielding to the tutelage of the Holy Spirit Apostle Reid established Dunatos International Training and Development Center in 2012. Dunatos is an international entity which houses prophetic schools ministering to masses of people on diverse forums. Influenced by his God given ability to endure and solve problems in life Apostle Reid founded I AM A SOLUTION BRANDING GOSPEL in 2012.

Apostle Reid continues to travel throughout the United States and around the world ministering under the apostolic and prophetic mandate of the Holy Spirit with signs and wonders following.

TRAVEL, HOTEL, AND MEALS
Travel:
The Host Ministry shall provide a minimum of two round-trip airfare tickets for Oliver T. Reid "The Solution Coach" and one assistant (non‐stop flights when possible) for most ministry types Oliver T. Reid flies out of Washington Dulles Airport (IAD); however, depending upon his schedule, he may depart from another location. When traveling alone Oliver T. Reid prefers to be picked up and transported by a male.
On occasion, O.T.R. Ministries International may elect to drive when destinations are within 5 hours or when Oliver T. Reid wishes to bring a larger ministry team without placing undue burden on the inviting ministry. In these instances, a traveling allowance is required based on vehicle rental, payment to driver, and gas receipts. When the latter is chosen, the Host Ministry shall immediately remit payment to O.T.R. Ministries International for travel costs. Please note that in every instance it is our desire to work with your organization to minimize travel expenses.
Please allow adequate time in finalizing all details to facilitate this.
Prophet Reid’s assistant/office must approve all travel schedules and hotel arrangements. Please provide written options of flight schedules.
Number of Tickets Provided (based on ministry request type): _____
Hotel:
The Host Ministry shall provide 1 to 2 non‐smoking hotel rooms with double beds for Prophet Reid and pre‐approved team members. We request that you consider appropriate hotel accommodations so that the ministry team has an environment that is conducive to proper rest. Please ensure that hotels chosen provide the following: elevator access, interior hotel room doors that do not lead directly to the outside, and a business center for copying and/or computer use.
Please provide all hotel information at least three weeks in advance. Hotel rooms should be guaranteed by our organization for room and tax. Please check rooms in prior to Prophet Reid’s arrival and deliver 2 keys or each room to Prophet Reid’ s assistant upon arrival at the hotel.
Meals:
The Host Ministry shall provide 1 lunch or dinner meal per day (at minimum) for Oliver T. Reid and attendant or a meal allowance of $50 per day for Prophet Reid and 1 assistant. Food preferences are as follows: fresh assorted fruits or salad, garden or chef salads, grilled or baked chicken, turkey, whole wheat breads, bottled water, Propel Water assorted, and coffee or tea sweeten with Splenda. Meal receipts can be provided upon request in lieu of a meal allowance; and should be reimbursed separate from honorarium at the conclusion of the ministry event.
PRODUCT SALES
Host Ministry agrees to provide one (1) or more 6 to 8 ft tables and (2) volunteers to oversee the sale of Oliver Reid’s "The Solution Coach" CD's both before and after each service, unless otherwise determined that O.T.R. Ministries International will provide staff to sell products. Each CD will be sold at $7.00, DVD at 10.00, and Books at $12.00 checks payable to Oliver T. Reid unless otherwise noted. Host Ministry will not charge O.T.R. Ministries International or take a % of the CD, DVD, and Book sales.
Host Ministry agrees to make announcements at each service as t o the availability and location of the products for sale.
Please list two (2) representatives from your ministry to assist in selling.
SOUND/VISUAL EQUIPMENT
When the host ministry engages Oliver T. Reid as a speaker appropriate amplification and speakers, a CD player, 1 cordless microphone, and a musician (minimum of a keyboard player is recommended. When the host ministry engages Oliver T. Reid as a workshop facilitator, the hosting ministry agrees to provide a mic stand, amplifier, and appropriate amplification and speakers; and 1‐2 additional microphones for use by the audience. As a workshop facilitator, it is further agreed that an LCD projector or other visual aid will be provided upon request.

RECORDING REQUIREMENTS
The host ministry acknowledges that (other than as set forth below) neither O.T.R. Ministries International nor any of heir representatives have granted the host ministry any rights with regard to utilizing any form of recordings of Minister’s singing, teaching, preaching, worship, or other service as contracted for in this Agreement.
Upon completion of Reid’s assignment, we request one (1) CD and one (1) DVD/beta copy of each event at which Prophet Reid ministers. Should these items not be available immediately, please mail a copy to O.T.R. Ministries International, 9616 Riverdale Pl. Manassas, VA 20110 within 7 days after the completion of the ministry assignment.
HOST MINISTRY UNDERSTANDS:
That recordings of services can be given away “free” or sold at a fixed or nominal fee to the attendees at the event; that O.T.R. Ministries International is the sole owner of any recordings made and maintains for itself the right to approve or disapprove of any prospective uses of such recordings; that any other contemplated uses for such recordings require the written (or e‐mailed) approval of Oliver T. Reid. Verbal authorizations or any other manner will not be accepted to request permission for recording uses.

The Solution Coach Motivational Speaking engagement primarily focuses on: verbally inspiring, provoking, encouraging, igniting, and affirming individuals on all levels to dream again. We motivate participants to not only to reach for the stars, but to grasp the opportunities that are right in front of them. Our services use the canvass of schools, colleges, churches, multimedia venues, businesses, and private organizations, to paint a detailed picture of hope for every listener. For corporate groups, Oliver Reid works within organizational pyrimidines that equip employees to both grow professional and increase their company's morale.

Our recent travels to various nations, has directly impacted the mission of The Solution Coach. Experiencing the glory of God across the globe, has inspired us to provide cutting edge global solutions to both clergy and laymen inside the Christian sectors.

Wireless or lapel or cordless microphone