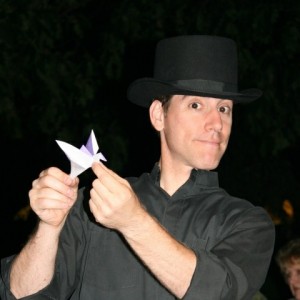 I have taught and folded traditional origami from traditional square paper and US currency, at corporate functions and trade shows, birthday parties, bar mitzvahs, and as a street performer for fifteen years. I can interact with many different kinds of people easily, from seven year old children to medical professionals at big conferences, and make people happy!

I can travel anywhere, and have been booked in shows across the country.

Andrew was absolutely fantastic to work with. He was responsive throughout the planning process and even more wonderful onsite with the guests. All the attendees loved Andrew's vibrant personality. He is so talented and showed off his many origami skills. I would highly recommend hiring Andrew and will definitely be using him again in the future for other events.

Andrew was great at our event. We had a corporate event to celebrate an awareness day internally at the offices - we had some tables set up and we asked Andrew to join us and teach our colleagues how to create origami shapes near the cafe in celebration of the day. Andrew was engaging and very inclusive, and was patient enough to tell us all how to do things properly. All feedback was very positive and it was a special day. He was also prompt and very practical helping us choose the correct paper, and supplied it for us. Thank you, Andrew.

Andrew was great, he was very entertaining and our students really enjoyed learning about, and practicing, origami.

Andrew was really flexible with a picky party that had a lot of moving parts. Very reliable and the guests were very happy.

It was very easy communicating with Andrew. He was responsive and professional. He was on time for the event and engaging with the students who visited his booth. He made special preparations for the event by learning some specific origami animal designs and provided a great experience. Would recommend.

Andrew aka The Origami Guy kept a group of seven year old girls and boys mesmerised for over an hour, just by having us all fold papers! My daughter absolutely loved it and so did her friends. He has a great sense of humour, a twinkle in his eyes, but also the natural authority to keep a group of little ones focused. And he is patient with mums who get the folding all wrong ....

Price Range: Varies, based on time and distance.

Insurance: $1,000,000 - Coverage is based on the performance; it is usually purchased on request.

If you need someone to attract people to a trade show booth, or if you need to entertain both children and adults at the same time, my performance is ideally suited for you - think of the classic Warner Brother's cartoons; funny on the kids level and funny on the adult level simultaneously.

For kids events and parties, this is an ideal medium - there is only paper, so the mess is only that - paper! Rather than have kids sit and and be merely entertained, I teach some very basic origami pieces, and they walk away from a party knowing something new. Part of my performance has them learn a very basic 'modular' piece of origami that they then use to create a single piece of large origami - a neat piece of amazing teamwork.

Origami (the Japanese word for paperfolding), as a combination of art, mathematics and engineering, and has always fascinated me. I have been folding since I was a kid, and began giving away origami in 1990 during a trip to Turkey. In 2001 I started street performing in Harvard Square (Cambridge, MA), and now perform at Waterfire (Providence, RI) as well as at scores of other places, both public and private.

I have come up with many original pieces, and am most proud of my "Candy Wrapper Dragon," created explicitly for the independent movie of the same name. I am a member of OrigamiUSA, the largest origami organization in the United States, and have taught at the yearly OrigamiUSA convention in New York. I have also taught at the Cambridge Center for Adult Education, the Arlington Center for the Arts and at countless other venues, from libraries to hospitals.

My staging is very easy. I can stroll around folding origami in the air for events where I perform (silently, or with patter), and for teaching, we only need a flat surface for students to fold.

My performance usually leans towards simple pieces of traditional origami; many of them (the grasshopper, the flapping bird, the windmill, the frog, the butterfly) are kinetic, and are really wow the audience.

For roving entertainment, none; for performance with teaching, a flat surface for each person who wants to learn.