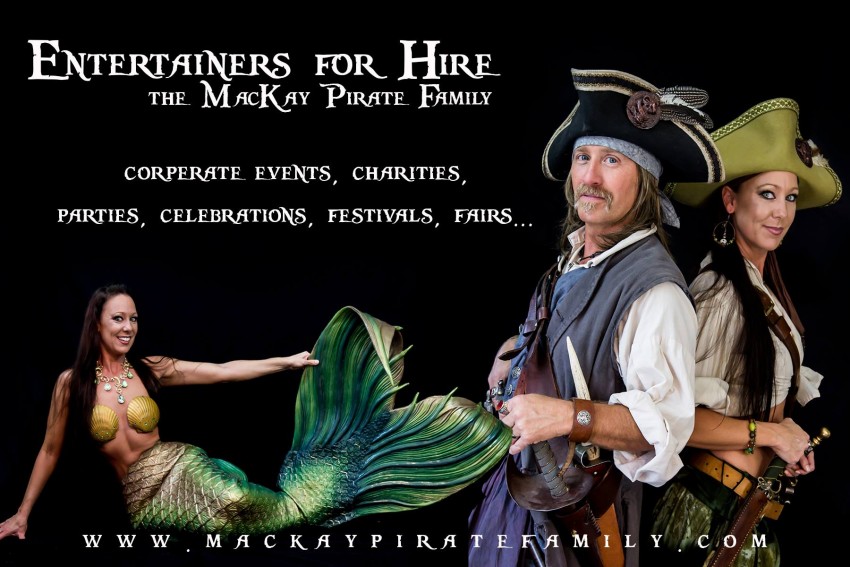 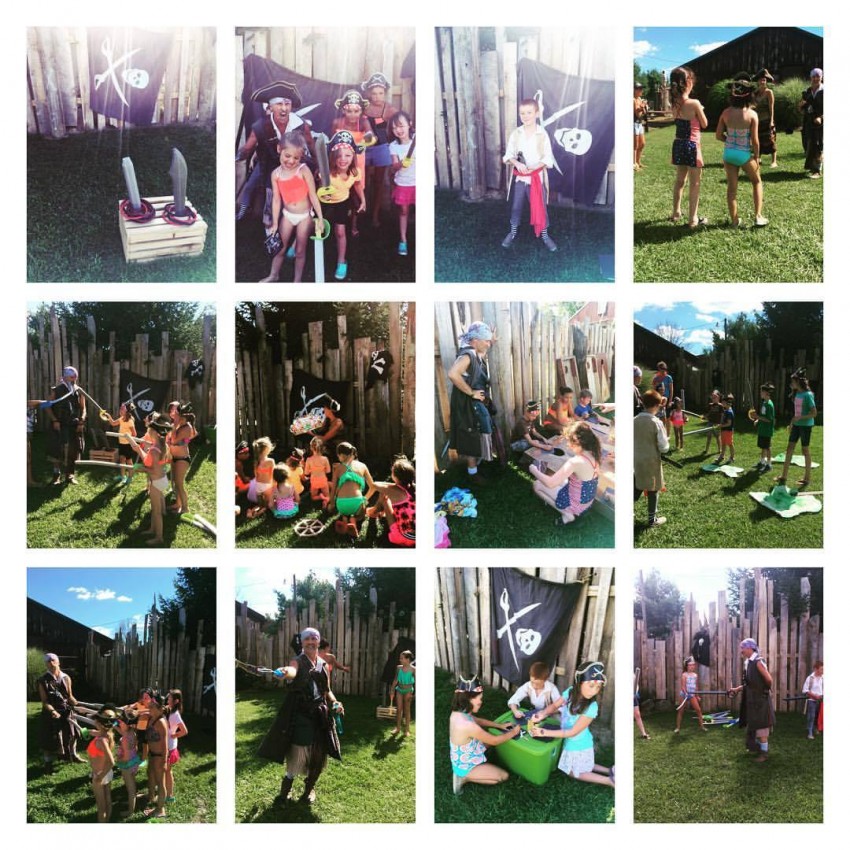 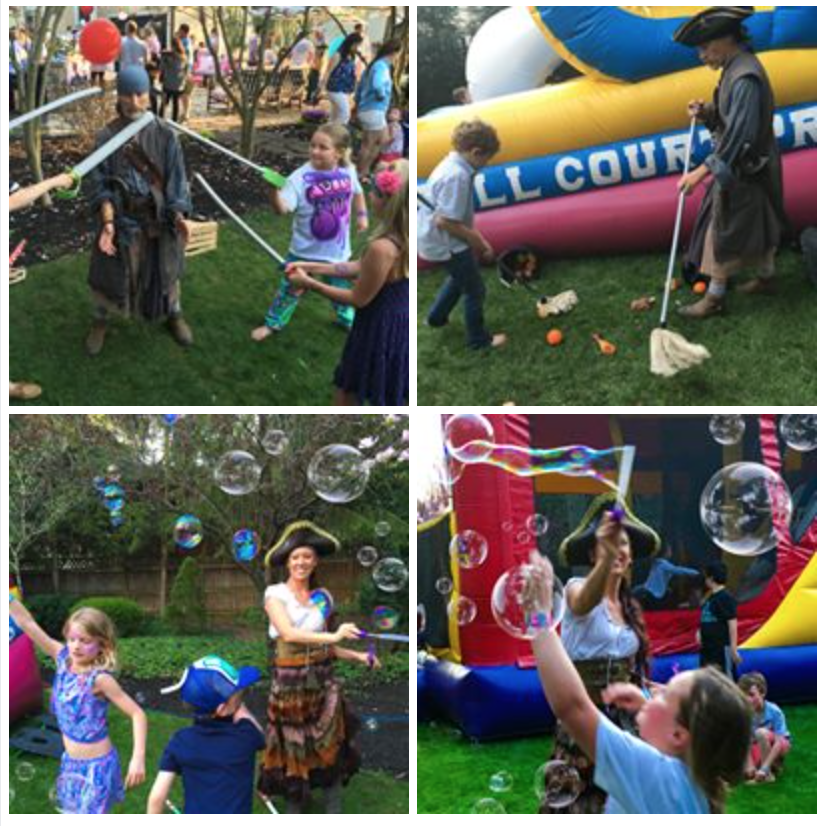 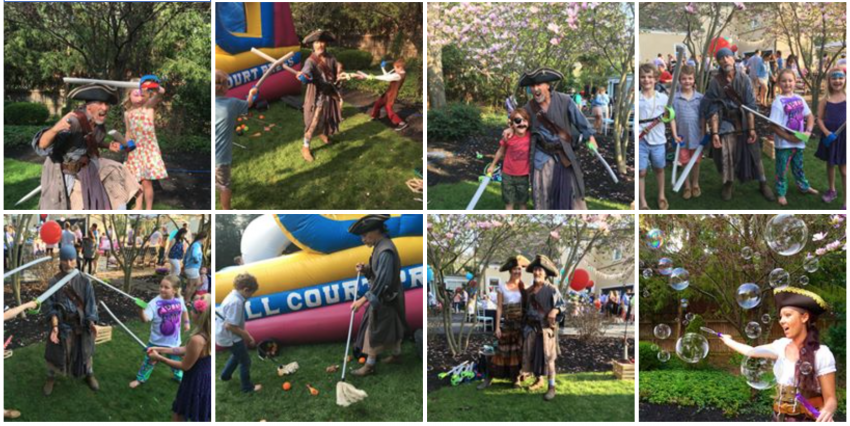 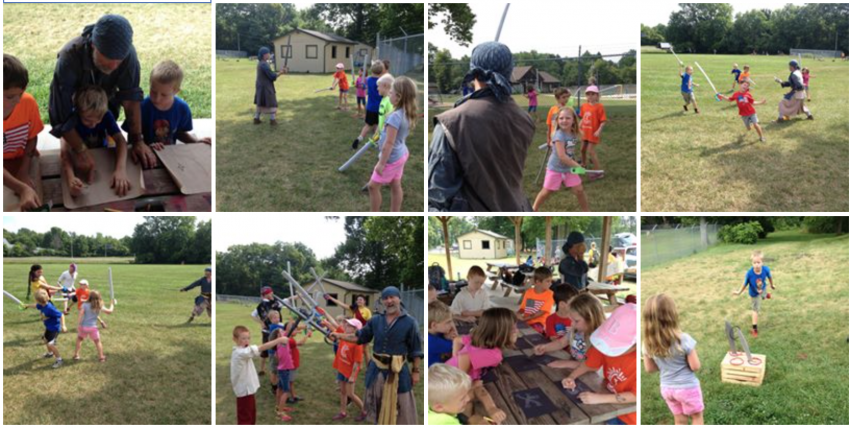 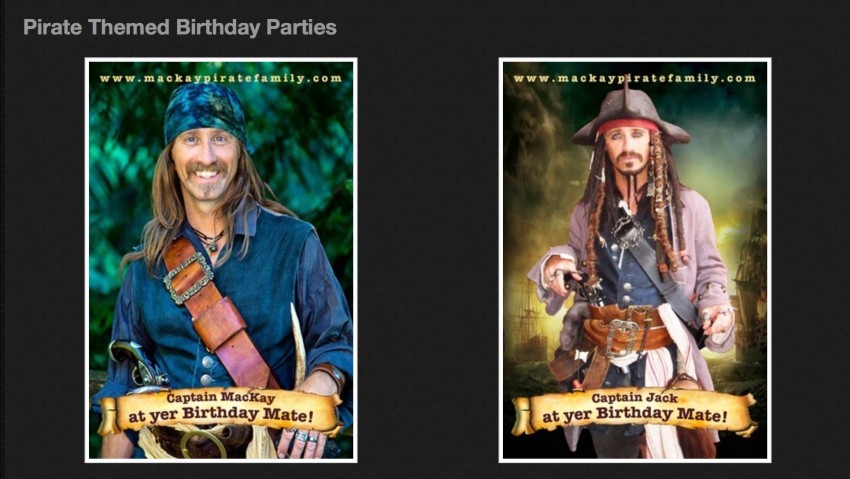 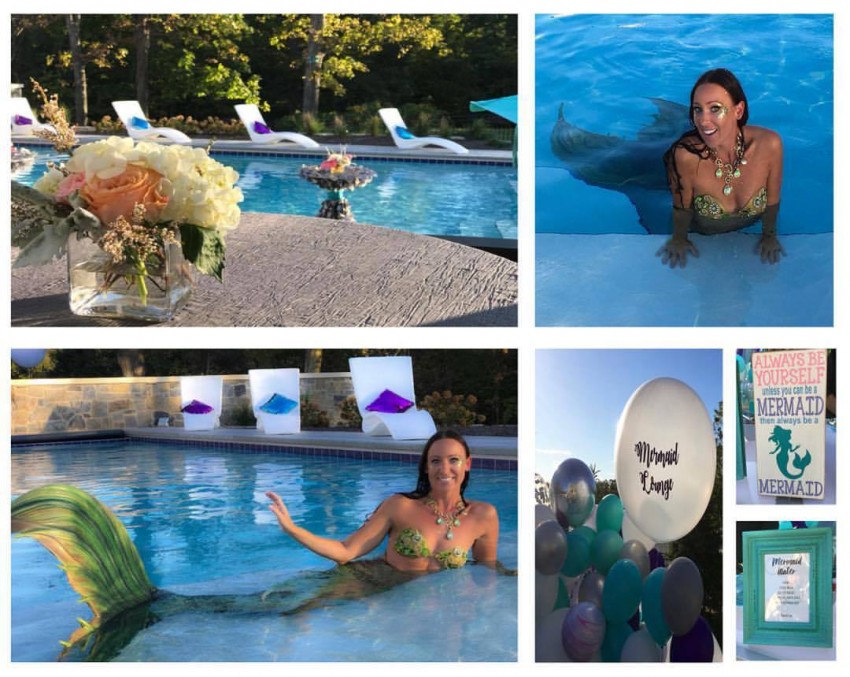 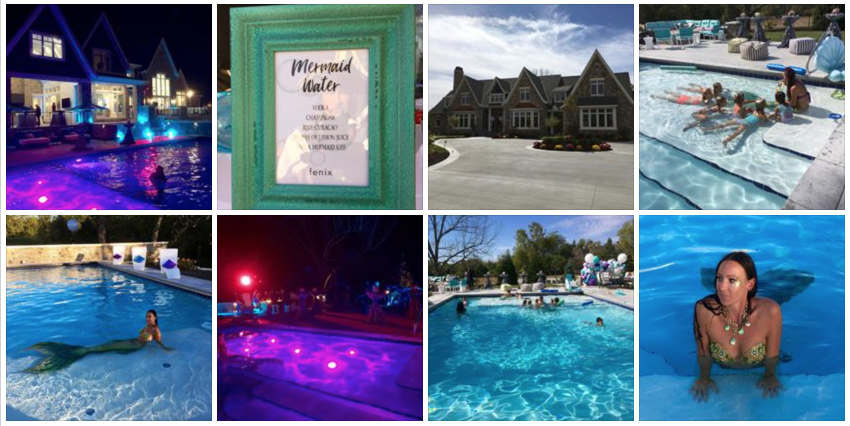 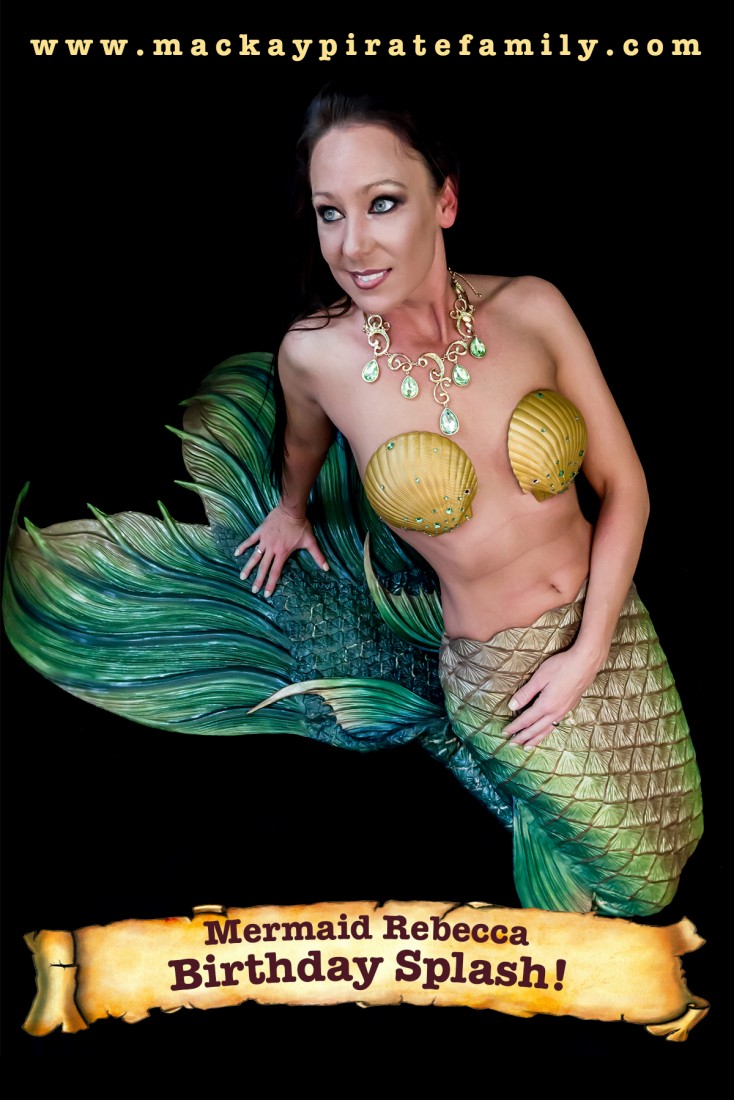 Pirate and Mermaid Entertainers for Hire!

The MacKay Pirate Family is available for your Pirate or Mermaid Event. Whether it’s your child’s Pirate or Mermaid Birthday, International Talk Like A Pirate Day, a charity or Corporate Event, The MacKay Pirate Family will bring their Pirattitude and add the ambiance to make your festivities truly amazing and memorable. From kid friendly activities to real black powder cannon shows, they are excited to work with you to customize their offerings to your special occasion.

The MacKay Pirate Family is awesome

We hired the MacKay Pirate Family for our son's 5th birthday party. These two were absolutely amazing and kept the kids attention well beyond anyone's imagination. All the kids were laughing and running. I would recommend this family to anyone wanting a pirate experience. They were very prompt in returning any message I sent them and definitely delivered above and beyond our expectations. Thank you so much for making a 5 year old boy so excited to have real pirate at his birthday party.

A real Pirate Captain and his First Mate will come to your child's birthday party and add pirate ambiance and swashbuckling fun.

This One hour Pirate Birthday Experience will include:

A real Pirate Captain and his First Mate will come to your child's birthday party and turn the party into a pirate school with swashbuckling pirate crew and Birthday Captain.

A real Mermaid and her Pirate Captain will come to your child's birthday party and turn the party into a splashing good time.

This One hour Under the Sea Birthday Experience will include:

-Meet and Greet with Professional Mermaid Rebecca or Character Mermaid Ariel.
-Photos with Mermaid (photography not included)
-Autographs
-Special Mermaid Gift from under the sea for the birthday Child.
$150.00

Under the Sea Package

A real Mermaid and her Pirate Captain will come to your child's birthday party and turn the party into a splashing good time.

This Two hour Under the Sea Birthday Experience will include:

-Meet and Greet with Professional Mermaid Rebecca or Character Mermaid Ariel.
-Photos with Mermaid (photography not included)
-Autographs
-Special Mermaid Gift from under the sea for the birthday Child.
-Sea Treasures for all the Children.
-Swimming with the Mermaid (water needed)
-Swimming Games
-Swim Like A Mermaid
-Swim through the hoop
-Diving for Treasure
$250.00

The MacKay Pirate Family can come to your school, Library, Camp or other children's activities and provide a wide array of entertainment and education.
Services are custom to each event and the needs and requirements of the participants.

Possible Activities Include but are not limited to the following:

Cooperate Events, Charities and Other Events:

The MacKays are 18th Century Pirates living in modern times. Pirate reenactors, who educate the public about the Golden Age of Piracy by living a pirate lifestyle and representing that at pirate gatherings in exotic locations around the world. Although they are living historians, the MacKays are also multi faceted artists, artisans, and performers who are always creating new adventures. Their exploits are entertaining and often the stuff of fantasy and legends. This dynamic Pirate Family is comprised of a Captain, his First Mate and their Cabin Boy. Lets meet each in turn…

Jeff MacKay:
A notorious pirate, even amongst the most prominent pirates in the community, Jeff MacKay truly lives the life of a Pirate in modern times. He is a dashing swashbuckler, his charming personality and dapper smile gives all who meet him a feeling of comfort and familiarity. It’s not until you get to looking about his person, that you notice he is never without an array of weapons: his Ranger ax and long Knife, cutlass, and flintlock pistols, you soon realize this is not for show. Jeff lives a pirate’s life.
In 2009 the pirate community elected Jeff as one of the Devil’s Dozen Pirates and he was inducted into the Order of Leviathan. A benevolent organization within the Pirate Community, where he served as the Grand Leviathan 2010-2014. It was Jeff’s great honor to hold such a prestigious title amongst his own and it is his great hope that he and his brethren do works of good for the pirate community, as well as the world at large.

Jeff enjoys the life of a freebooter often appearing at Pirate Festivals performing along side black powder crews such as B.O.O.M. and PDXYar, adding his pistols, blunderbuss, and swivel cannon to the cacophony of fire & smoke. When not in the firing line, Jeff can be found with his mates enjoying the festivities, throwing an ax or sharpening his weapons.

Jeff’s dedication to this alternative lifestyle does not end when he leaves a festival. Jeff is also a talented artist and Master Hatter. He brings the arts of the Golden Age to the present for all to enjoy, giving them the means to have the most period correct head ware, weapons and accessories.

He is the owner of Captain Jack’s Pirate Hats and The Pirate Trading Co. His craft well respected and his work highly sought after. He has been called the “Ralph Lauren of Pirate Haberdashery.”

In 2009 Jeff finished his first Screenplay “The Buccaneer”, which he has been marketing like a true pirate. He has been nurturing the project and building a grass roots fan base through social media.

Most recently Jeff served as Evermore Adventure Park's Pirate Captain, Props Director, and as Attraction Designer during the design and development of the park concept.

It is through entertainment and education that Jeff captivates those who have a heart for freedom, and through his trade that he gives them the tools needed to transform themselves into pirates of yesterday, allowing them to live of A Pirate’s Life.

Rebecca MacKay:
One of the most alluring pirates to cross your path at a Pirate Festival is Rebecca MacKay. She will entice you with her stunning green eyes and sultry smile.

Rebecca is a well known in the pirate community: from pirate reenactment and living history to charities and book readings, to being an entrepreneur & entertainer. She can be found leaving her mark on every facet of the pirate subculture. Rebecca was nominated to the Order of The Leviathan in both 2012 and 2014, and Inducted in 2014.

Rebecca travels to exotic locations around the world and educates Pirate Enthusiasts and Lubbers alike on the life of piracy, and to entertain them. She participates in sword fights, ax throwing, black powder shows and cannon battles.
A splash of salt water and this pirate loses her sea legs for a mermaids tail. Adorned with shells and a stunning tail Rebecca can be found swimming & splashing with her Pod, The Rouge Mermaids. She captivates pirates and fairgoers alike as she transforms fantasy into reality for all to enjoy. Rebecca is the co-founder of The Rogue Mermaids and The Northwest Mermaid Pod.

Rebecca has combined her passion for pirates and adventure, with her love for children and writing. She is the Author and Illustrator of a series of imaginative children’s books about the "Little Pirate". In addition, Rebecca also has her own column in Mutiny Magazine called “Mermaids in the Wild” where she travels and interviews beautiful sirens of the sea.

When not attending festivals as a pirate or swimming as a mermaid, Rebecca can be found designing and costuming for an assortment of events an productions. Most recently Rebecca served as the Director of Wardrobe, Interior Design, and Attraction Design for Evermore Adventure Park.

She can also be found aboard ship assisting her captain, Jeff MacKay, with their many piratical businesses: Captain Jack’s Pirate Hats, The Pirate Trading Co., Little Pirate Books & The Rogue Mermaids.

It is the client's responsibility to book the venue if needed, cover any venue fees, and check to see that the venue is Pirate friendly.

The Captain's weapons are authentic replicas. It is the clients responsibility to make sure they are permitted, particularly if firing of his flintlocks and cannon are required.

During Mermaid parties our mermaid needs a secure and private area to change so that children / guests do not see her in her human form (out of costume) and with legs.

The fee of the Pirate Captain (Mermaid Assistant) is covered in the cost of the performance. He is non-negotiable and must be there for the safety and mobility of the Mermaid.

It is the client's responsibility to book the venue if needed (pool, lake, etc.), cover any venue fees, and check to see that the venue is mermaid friendly.

Mermaid Rebecca is based out of Newark OH, however she is willing to travel. If the traveling distance is greater then 60 miles, the expense of traveling will be covered by the client.