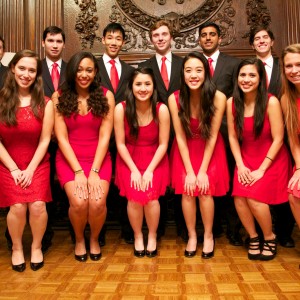 The Harvard Lowkeys are Harvard's premier co-ed contemporary a cappella group. From indie alternative to dubstep, our members arrange our music and we aren't afraid to test uncharted water.

We perform for a multitude of venues, including corporate events, weddings and personal gatherings. Contact us today for a quote!

Be the first to review The Harvard Lowkeys

The LowKeys were founded in 1999 by a group of ambitious students who felt there was a void that needed to be filled in the a cappella scene. Now, the Harvard LowKeys are a well-established group in the Harvard Community.

All songs performed by the LowKeys have been arranged by former or current LowKeys. The LowKeys encourage all of its group members to arrange songs. We, therefore, wind up with an eclectic collection of music, ranging from classic rock to top 40 to rap and everything in
between.

As a Sanders group, the LowKeys have the privilege of performing on Sanders stage twice per year - once in the fall and once in the spring. Our Sanders jams are our biggest performances of the year and we spend most of each semester preparing for them.

The LowKeys are the only Sanders group that is a part of the Public Service Network. It is very important to our group that we give back to the community, so we do charity performances in the Boston area as well as when we go on tour. In the past, we've performed at nursing homes, for disabled children, at schools with low budgets for art and music, at homeless shelters, and various other venues.

The LowKeys record once a year at a recording studio in Boston to create tracks for CDs. All members find the experience of recording in a real sound studio to be rewarding and a great opportunity for growth as singers.

At the end of J-term, the LowKeys go on tour to share our music with another community (and to have a fun vacation with friends!). Past destinations include, New Orleans, Miami, Atlanta, and San Francisco.