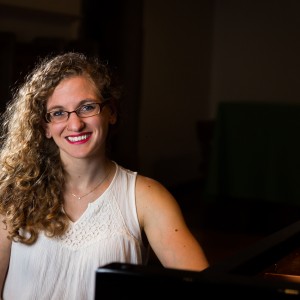 I play a variety of musical genres for your wedding ceremony, private party, or corporate event. Music is customized to meet individual needs, and I will work with you to create the perfect musical backdrop to your occasion!

Be the first to review Tasha George-Hinnant

On initial booking, you will get a phone consultation to discuss what kind of music is needed, and depending on the event, how many meetings (phone, in person or otherwise) will be scheduled to ensure satisfaction. On the day of the event, I will take care of everything - setup, breakdown, and of course music! All you need to do is enjoy.

Based in Ithaca, New York, Tasha N. George-Hinnant began piano study at the age of six, and also started cello lessons at sixteen. She began teaching and coaching peers and younger friends as a teenager, and decided at that point to pursue music professionally. Tasha has participated in a variety of masterclasses with pianists such as Thomas Rosenkranz and Andrey Pisarev. Community involvement is a great priority for her, and in addition to teaching, she accompanies soloists and ensembles in the area, has served as a church pianist, and was president of Nazareth College's chapter of the Music Teacher's National Association for two years. She has also participated in multiple chamber, orchestral and choral ensembles as a pianist, cellist, and vocalist. In addition to maintaining a private studio, Tasha served on the faculty of Aria's School of Music and Art in Greece, NY from 2009 to 2013, and on the staff of Hochstein School of Music and Dance in Rochester, NY from 2011 to 2013. Tasha received a Bachelor's Degree in Piano Performance with an Emphasis in Pedagogy in May 2011 from Nazareth College, and an Advanced Certificate in Piano Pedagogy in 2012, also from Nazareth. Tasha completed a Masters of Music in Piano Performance at Ithaca College in May 2015. Previous teachers have included Phiroze Mehta, Brian Preston, Michael Salmirs, Charis Dimaris, and Trudy Borden, among others, and cello with Kathleen Murphy Kemp and Christine Lowe-Diemecke. She is currently on the piano faculty at Community School of Music and Art in Ithaca.

I will need to know if there is a piano or digital keyboard on site. If there is not either, no worries, I will supply an instrument. If a digital keyboard is going to be used, I will need to setup in a place that is within reach of an electrical outlet. If the event is outside, I will also need a flat place to set up. (A large piece of plywood is acceptable). Please know that I will not perform in wet/cold (below 60 degrees) weather.

If I am using an electric instrument, I will need an extension cord and an electrical outlet.

If the event is outside, I will need a flat surface to set up on, such as a large piece of plywood.