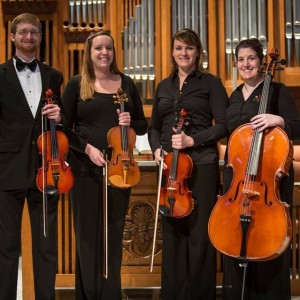 Classical, religious, and contemporary music for prelude, postlude, and during your wedding service.

SisQ for my daughter's wedding

They were great. We enjoyed having them for my daugter's wedding. I would definitely recommend them.

The String Quartet was on my wishlist for my daughter’s wedding. Your performance was added the elegance we were looking for and sounded flawless. Y’all did an amazing job! Thanks for adding an extra specialness to our day!

Thank you, Angela! We are so glad you enjoyed our music. We were honored to be part of Lakelynn & Justin's special day!

SisQ was amazing at my wedding. They were super easy to work with!! Highly recommend!!!

Thanks, Haley! You were a gorgeous bride! We were privileged to share your special day with you! Best wishes to you and Matt!

SisQ was the life of the party!

I can't say enough about the quality and professionalism of SISQ. We have already referred them to several attendees. They were the perfect touch for our wedding and reception. I have even been asked for there playlist. Amazing!

SISQ (Rob, Steve, Leslie, and Sarah) - Thank you so much for playing at our wedding this past July! You all are a talented bunch and we received numerous compliments on our choice in music. From learning the few songs that we requested to help make our day even more perfect to your smooth transitions when the pastor unexpectedly up and changed things mid ceremony, you all truly showed your dedication, professionalism and talent! We will definitely be recommending you to friends of ours getting married in southern Indiana in the future! Thank you again! Melissa and Michael Segal

You are most welcome! No worries about the mix-up with the pastor-- we always love a good challenge!

It's been our pleasure to make your wedding day even more perfect. Thanks for letting us know, and thank you as well for recommending us!

Our standard wedding package consists of a 15-minute prelude, music during throughout ceremony (processional through recessional) as requested, and postlude long enough for the guests to recess (or up to five minutes if they are not leaving).

For non-wedding events, we charge by the hour.

For those booking well in advance (6 months and more), the SISQ is often willing to learn new pieces, including pop music, within reason. Please note we may need to turn down such requests as mentioned under "Additional Notes & Technical Information".

The Southern Indiana String Quartet formed in May of 2011.

Rob Schnautz has played violin since 1997. He was forced into music in 4th grade, and forced to learn violin (instead of drums) in 5th grade. He gave up studying music in sixth grade, and, regretting this decision, retaught himself the basics just before entering 7th grade. In 8th grade, Schnautz was accepted into the EVSC Honors Orchestra and also began performing at St. Joseph Parish in St. Joseph near Evansville. In 2001, he played in Mater Dei High School's first (and last) orchestra class since 1960. He has performed in numerous classical, liturgical, theatrical, and jazz ensembles. Schnautz has studied violin with Rena Goss, Donald Travis, Sr. Rose Wildeman, Marianne Hummel, Daryl Nurrenburn, Mark Freeman, Sheryl Schuster, Carrie Cimildoro-Beem, Kristan Gilles, Kurt Weimer, David Rodenberg, and Dennis Noon, and he formed and directed both Jazz for Enrichment and the St. Joe Quartet prior to directing the SisQ. Today, Schnautz plays in the Wolfgang Orchestra and at St. Joseph Parish and now directs the SisQ. In his free time, Schnautz hunts for bugs, both outdoors and in software.

Leslie Baumgart (nee Brown) has played viola for 25 years. Like Schnautz, her first choice would have been drums, but after her mother told her to "choose something practical like the violin," she chose viola. She has just recently made the transition to violin for SisQ and is enjoying the challenge! She grew up in Cincinnati, OH and spent 9 years studying viola under the tutelage of Louis Proske, violinist in the Dayton Philharmonic, Dayton OH. Baumgart played in both regional and state orchestra, Cincinnati Symphony Youth Orchestra, and Blue Ash Youth Symphony Orchestra. She was also the principal violist and section leader of the Anderson High School Orchestra during her senior year. Brown studied music business at Belmont University in Nashville, TN where she expanded her horizons and played in a classical and jazz string quartet. Under the direction of Martin Norgaard, author of the Jazz Fiddle Wizard books, Belmont University Jazz String Quartet was invited to play at the International Association of Jazz Educators Conference in NYC. Baumgart also had the opportunity to attend a master class lead by Darol Anger of the Turtle Island String Quartet. While studying at Belmont, Baumgart took the role of principal violist and section leader for the Belmont University Orchestra. In addition to studying under the direction of Proske and Norgaard, Brown has studied with Dale Swisher, Chelsea Tipton, Monisa Angell, and Dr. Robert Gregg. Besides playing violin in SisQ, Brown plays viola in the Wolfgang Orchestra. She also works full-time at Evansville Philharmonic Orchestra as Sales Manager. In her free time, she enjoys reading, singing, biking, and dancing (ballet, Irish step dancing, and modern).

Sarah Land (nee Brown) has been playing the viola for nearly 20 years. Originally from Cincinnati, Ohio, she took private viola lessons with Mr. Louis Proske and played in her elementary, middle and high school orchestras. After competing in state contests, participating in honors orchestras, and joining the Blue Ash Youth Symphony Orchestra (BAYSO), she went on to play for the University of Evansville's University Orchestra while attending the University of Evansville. She most recently played with the Crossroads Christian Church Orchestra and is currently a member of the Wolfgang Orchestra. Land is experienced in playing for weddings, funerals and other special events. In early 2011, Land decided to move forward with her idea to start a southern Indiana based string quartet and founded what is now known as the Southern Indiana String Quartet (SisQ). She initially recruited her sister, Leslie Brown, and from there she found the talented Rob Schnautz and Matt Williams, the perfect additions to complete this ensemble. Professionally, Land is a Certified General Real Estate Appraiser, working full time out of the home so she may stay home with her children. She will obtain her MAI designation in the near future. Married to Randy Land, together they have a precious (already music-loving) 4 year old son, Stuart and a sweet baby girl, Samantha, born in October 2012.

Kris Miller has been playing the cello for 25 years. Originally from Niwot, Colorado, she starting playing the cello in elementary school, and started taking private lessons from Maggie Noble while in middle school. She participated in state contests, and was accepted through audition to the University of Northern Colorado Weekend for Strings all 4 years of high school, as well as All State Orchestra. She played in the Boulder Youth Symphony under the direction of Jurgen deLemos. She participated in the Colorado State University Summer Music Camp as well. She went to the University of Evansville and played in the Symphony Orchestra and Chamber Orchestra there, and took lessons while there. She continued playing with the Orchestra after graduation when they needed extra cellists. As an alumnae member of the music fraternity Sigma Alpha Iota, she has had the opportunity to perform at area nursing homes, and in recitals, including playing in a 12-piece cello choir. She is excited for this new opportunity to play in Sisq. She works full-time as a Certified Pharmacy Technician at Target Pharmacy. In her free time, she likes to play her cello, knit, read, and take her dog, Freckles, for walks or car rides.

A booking fee (and a travel fee, if applicable), are due up front in order to consider the event booked. Until this initial payment is made, we will not block off your event's date, and we may accept other events on that date if we deem you uncommitted to booking with us. Performance set lists will not be discussed until this payment is received.

If any incurred fees (including the performance fee) are not paid prior to the event, you agree to forfeit our services.

Due to licensing restrictions, most of our repertoire may be performed only at weddings and other invitation-only events. If your event is open-invitation, please let us know in advance. We are currently not licensed to play copyrighted music at open-invitation events.

We may decline your request to learn a new piece if we feel we cannot perform it, whether the reason be due to skill, legal complications, poor adaptability of the piece, budget, or heavy workloads. Please note that for open-invitation events, music may not be under copyright. Songs published before 1923 are in the public domain.

To better assist you in planning your wedding or event, we've listed several selections that we play. This list is certainly not comprehensive!

We cannot publicly advertise some selections due to licensing restrictions, but additional songs are available for weddings or other private gigs!

We have so many influences it would be impractical to list them all!

We strive to bring to life the classics of the great composers, including Bach and Vivaldi.

We love sharing our own interpretations of the hits of bands like the Beatles, Survivor, and OneRepublic.

We think cocktail tangos and waltzes are awesome, and we love to learn and play them.

We dream of someday going electric, as the mainstream rock quartets have, including Bond, the Vitamin String Quartet, and Escala.

But-- our greatest influence of all is our fanbase! The faith they have in us is amazing, and the smiles on their faces and continued compliments are what keep us playing!

We require an unobsructed space large enough to fit four string players in a semicircular arrangement facing the event guests.