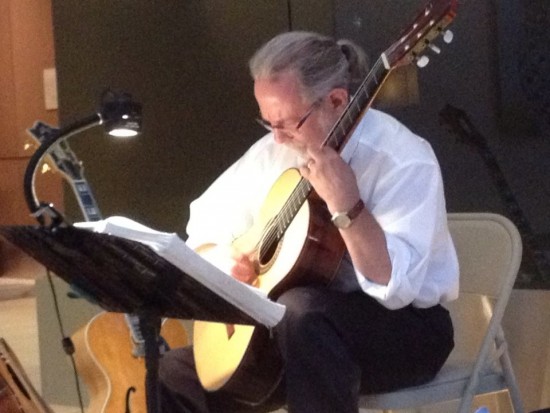 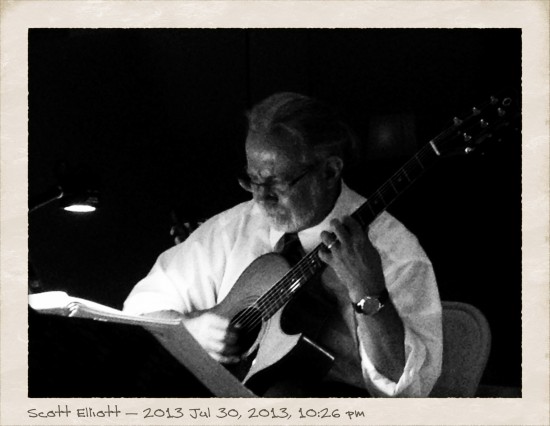 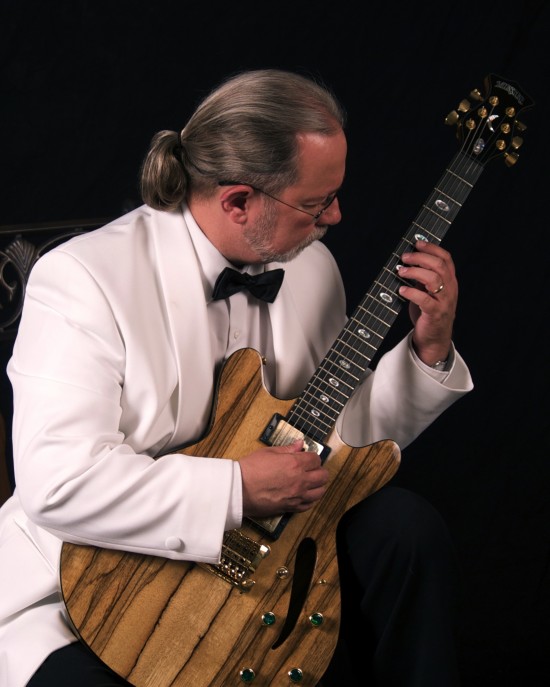 Ambient solo jazz/acoustic/classical guitar for an elegant, intimate atmosphere. One of the region's finest solo performers.

Member, American Federation of Musicians, Pgh Local #60-471 for many years.

Scott provided solo guitar music for a memorial service. He was a consummate professional; a great musician, easy to work with, accommodating, and has an incredibly kind personality. I would not hesitate to call him for any engagements in the future.

Perfect for our event!

Scott was perfect for our event. He was very professional and very personable and a very experienced musician. We only had 50 people at our client holiday luncheon, so we just needed some background holiday/seasonal music for the few hours we were there. I had many of my long time clients compliment us on Scott and I believe some of them actually told Scott themselves as they were leaving. I couldn't have asked for more for what we needed. I will definitely consider Scott again for my company and private events and I will definitely refer him to anybody looking for a professional guitarist for their event. Thanks again Scott!

Perfect touch to the evening!

Scott was amazing. He was concerned with details before the event and during the event. His music was the perfect addition to a wonderful evening.

Perfect Music for Our Dinner Party!

Scott is a consummate professional. Built a musical set to match our wants, kept in contact, was early to set up and sound check, etc. All of our guests commented at how great it was to have music for our event (a diner party for 16 at the Bourbon Prime Bar a the Marriott) and how excellent the music was. Even better, the party lasted longer and Scott had the flexibility to keep playing for us. His music selections were fun - classical to Beatles, to Clapton - all covers that didn't distract you but made you smile when you heard a chord progression and the lyrics and memories drifted into your mind. His guitar skills are incredible and his intuition about the mood of the party and his selections were perfect!

Great job at our fundraising gala

Was very professional and did a good job.

Scott was the perfect touch to our small wedding ceremony. The music was beautiful and Scott couldn't have been nicer. I would highly recommend him.

We could not have been more thrilled with Scott Elliott. He is truly a fantastic musician and has a great instinct about how to be a meaningful part of a private celebration without being intrusive at all. Scott went above and beyond for my mother’s birthday dinner; he arrived with three different guitars to achieve different sounds throughout the evening. He was considerate and polite - arriving well before our agreed start time. I hope to work with him again and again!

Mr. Elliott is a joy!

Gifted guitar player for our wedding. Don't bother asking anyone else! He made our day wonderful!

Scott was a very professional and kind person to work with -- not to mention he has an impressive musical resume. His guitar playing made an anniversary surprise very special for my husband and I. He is willing to travel to your location, and is willing to learn new music. He made sure to learn a few of our favorite songs for our event. We highly recommend him for especially intimate settings, and any very special occasion. Thank you Scott!

Our daughter got married outdoors at a lavender farm. Scott's music seemed very appropriate. He was happy to play any songs that she requested, and had some suggestions of his own. Scott was easy to work with, and made every effort to make our daughter's wedding special. Scott also played during the cocktail hour which was lovely.

This review is long overdue but I have been meaning to publicly praise Mr. Elliott for his performance at our wedding ceremony for a while. He was an absolute professional and worked with us to provide the experience that we wanted by taking song requests and turning them into beautiful pieces of art like I had never heard them before. I would hire Mr. Elliott again for any event in the future should a situation arise.

Perfect for our event!

First and foremost, he is very talented. Scott did an amazing job of accommodating all of our song requests, as varied as they were. He is an accomplished musician and obviously can adapt to many circumstances.

My husband and I had recently engaged Mr. Elliott for our son and daughter-in-law's post wedding day party in Pittsburgh. We had a formal sit down dinner for over 200 guests (many who were from out of town) and Scott performed solo guitar at simply a world class level. We, along with many of our guests who commented, were just captivated by his performance and it was, by far, the most enchanting memory of the evening! We are so grateful for his professionalism throughout the booking and scheduling process, his attention to our needs and requests, and then, finally, over-delivering with such a moving and beautiful performance. Thank you, Scott! We can't wait for another opportunity to hear you play again!

Scott played the cocktail hour and the ceremony for my wedding. He executed the requested pieces with the exact style that I was looking for. It was beautiful. I have a college degree in piano performance - from one musician to another, I can tell you that this guy is good. Hire him.

You can trust me to do a professional and artistic performance at your private function. The music is transparent -- no vocals, no drum machines, no tapes or "looping" that might be intrusive to conversation. I'm available for weddings, receptions, cocktails, corporate events, rehearsal dinners, house parties, holiday gatherings, etc., etc., etc. . . anything that might benefit from the added touch of live ambient background music. I'm comfortable performing for an intimate dinner for two, or a reception of several hundred. Repertoire ranges from Cole Porter to Eric Clapton, Disney to J.S. Bach.

Are you planning an event that may benefit from the elegant, intimate atmosphere of an acoustic solo guitarist? If you think this might be the added touch of class your event might require, please contact me.

You can trust me to do a professional and artistic performance at your private function. The music is transparent -- no vocals, no drum machines, no tapes or "looping" that might be intrusive to conversation. I'm available for weddings, receptions, cocktails, corporate events, rehearsal dinners, house parties, holiday gatherings, wine tastings, brunches, etc., etc., etc. . . anything that might benefit from the added touch of live ambient background music. I'm comfortable performing for an intimate dinner for two, or a reception of several hundred. Repertoire ranges from Cole Porter to Eric Clapton, Disney to J.S. Bach.

I've been a professional full-time musician since 1979, and a member of the Pgh Musician's Union (American Federation of Musicians, Pgh Local # 60-471) for many years. My fees are very reasonable.

We just want to again thank you for playing at our wedding on Sept 2nd. The music was exactly what we hoped for. We received many compliments on it & you certainly helped to complete our day.

"Scott Elliott is a superb guitarist. I was truely lucky to have run across his web site when I searched acoustic guitarist. He is professional and gracious from the start. I never met with Scott in person prior to the wedding, just phone calls and emails, as he helped me plan out the music. Our special day was made even more special by Scott as all my guests praised his playing as I visited each table."

"It was great meeting you and I am sure we will talk again! We had nothing but positive feedback about the music!"

I was not there but heard WONDERFUL things about the quality of your performance! Bravo! Well done! I was told that you "really classed up the joint" and many said it was the best political event they have ever been to, in large part due to your music. Thanks again for your tremendous effort. I'm sure you will be gearing from me again!"

Must be seated near a 3-pin grounded electrical outlet - I do not use portable generator power for outdoor events. Please also provide an armless chair (folding style in OK).