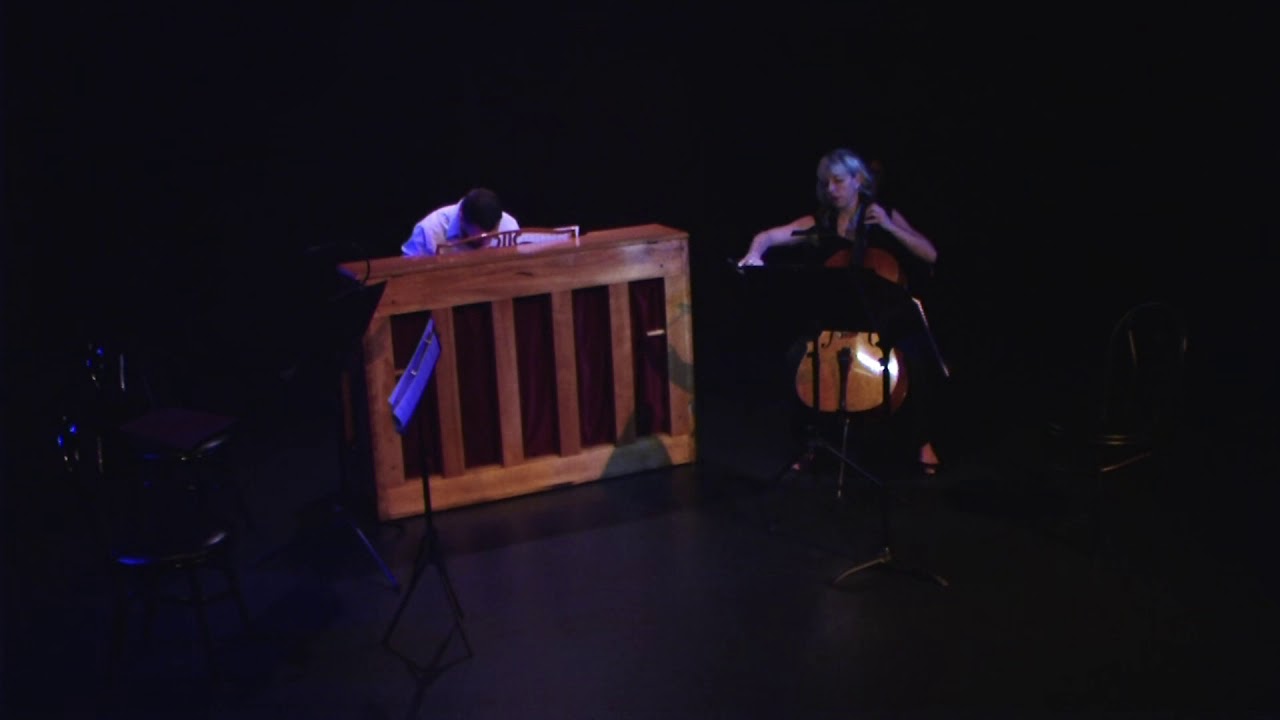 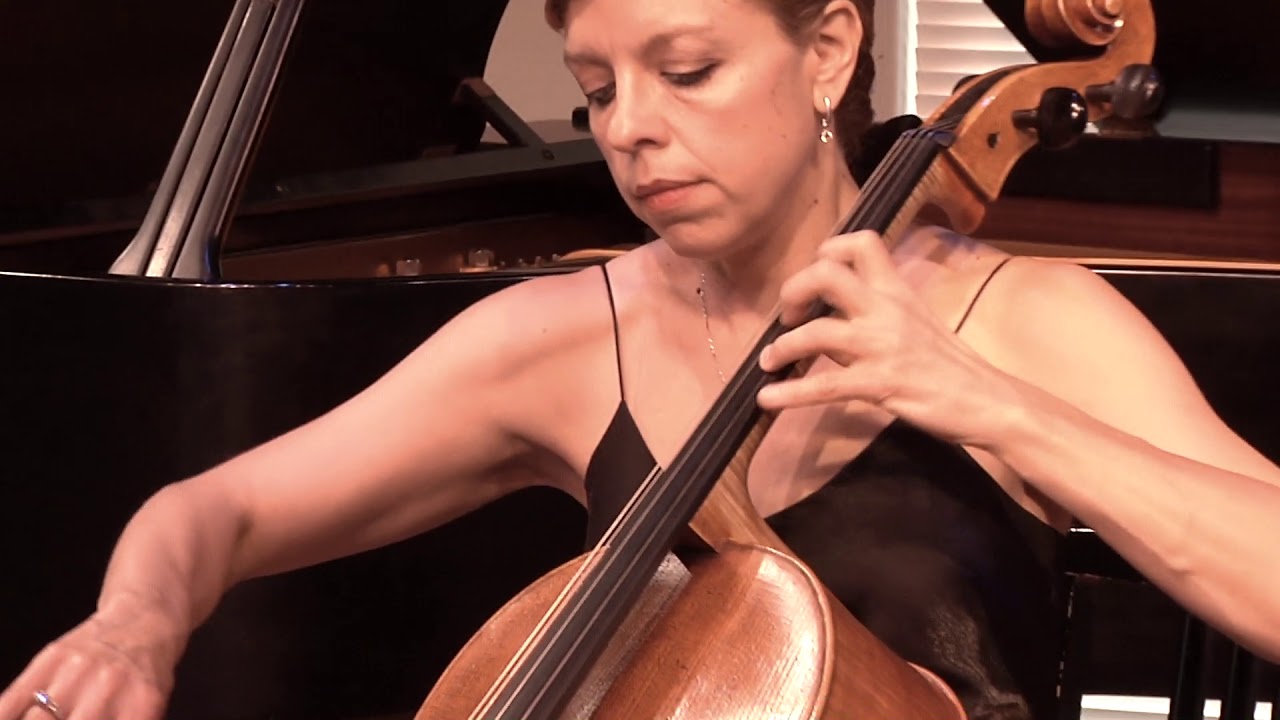 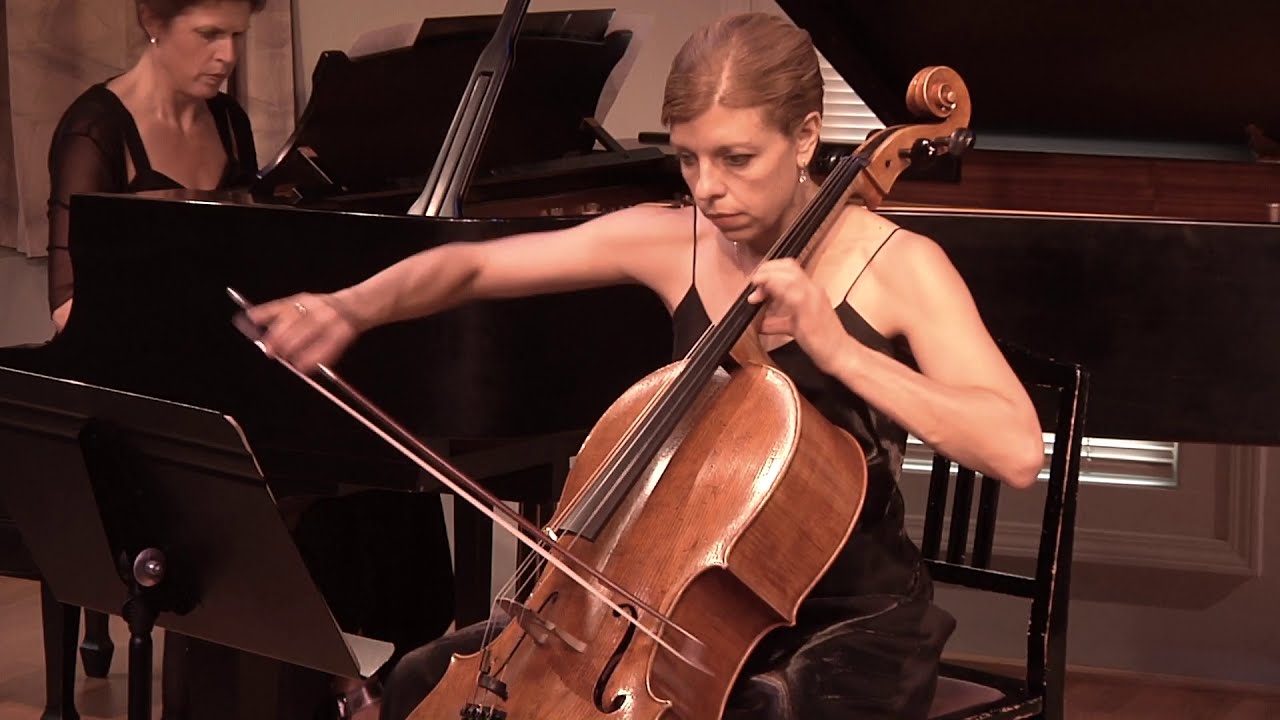 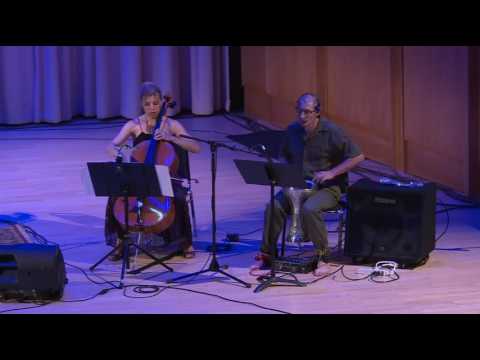 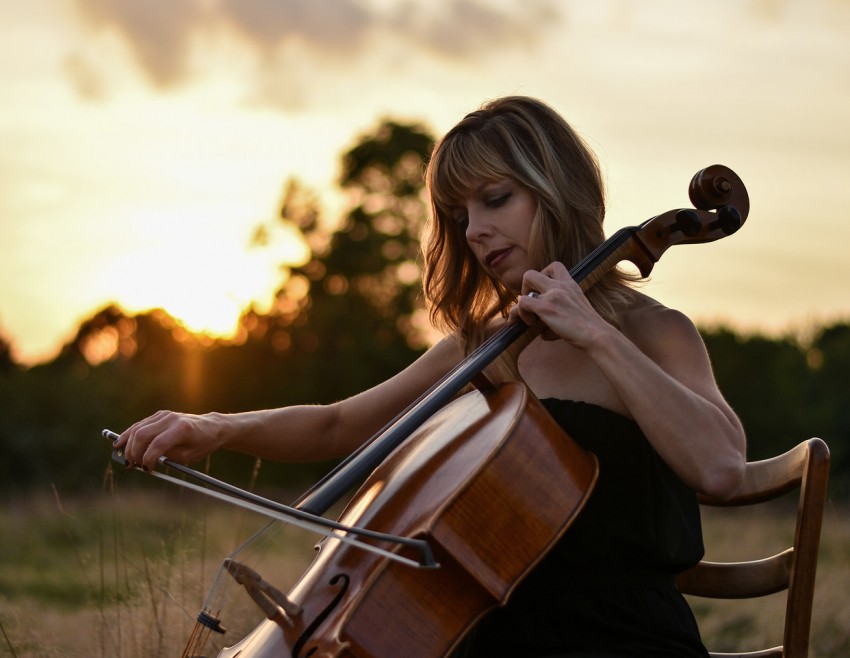 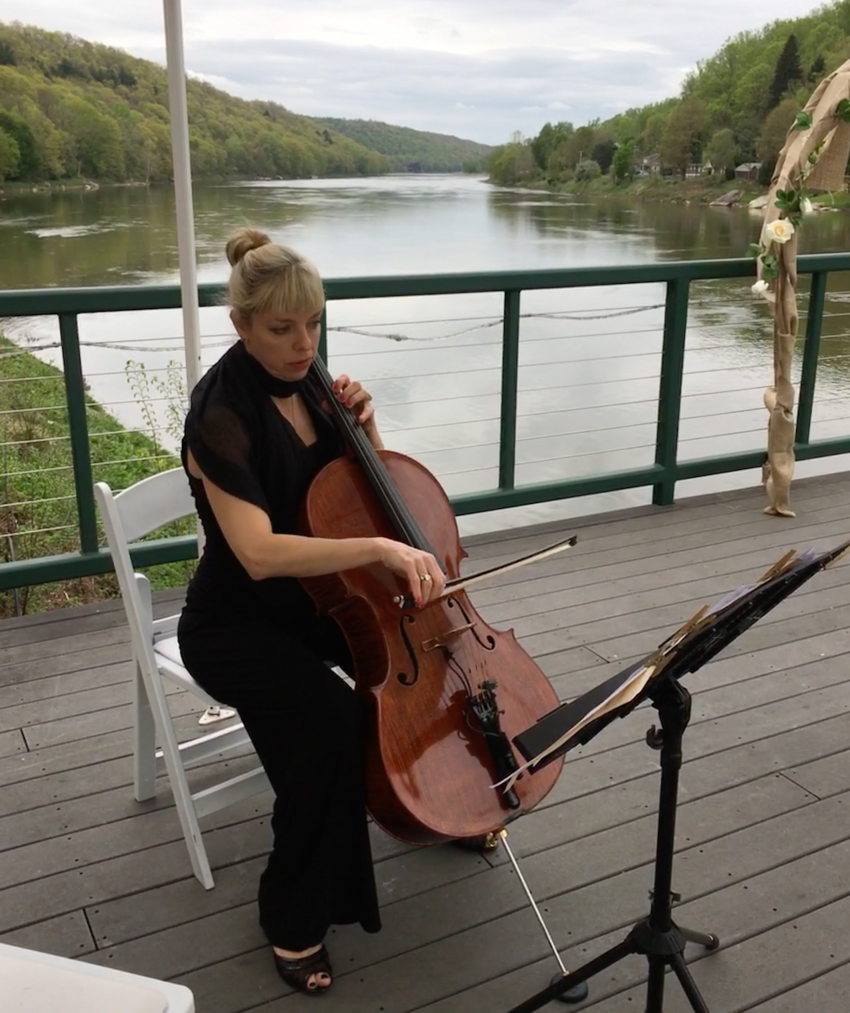 A beautiful ceremony setting at the Foxburg Inn 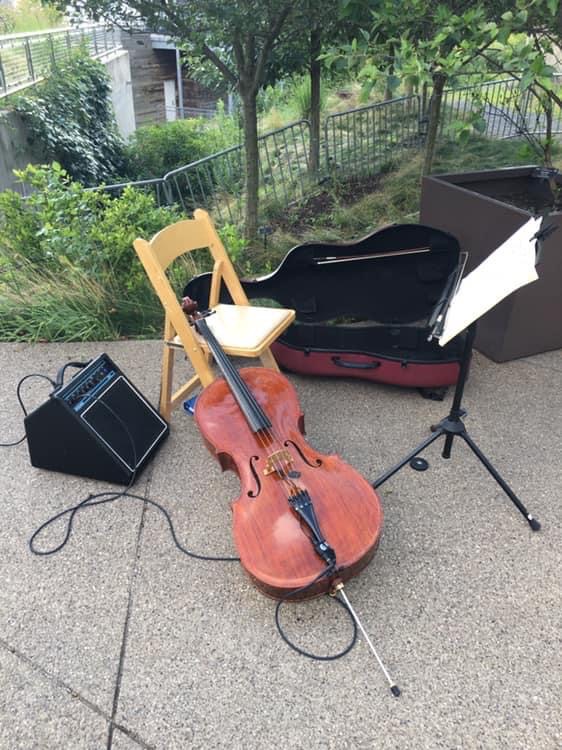 My sound set-up on a beautiful wedding day at Phipps Conservatory, Pittsburgh, Pennsylvania 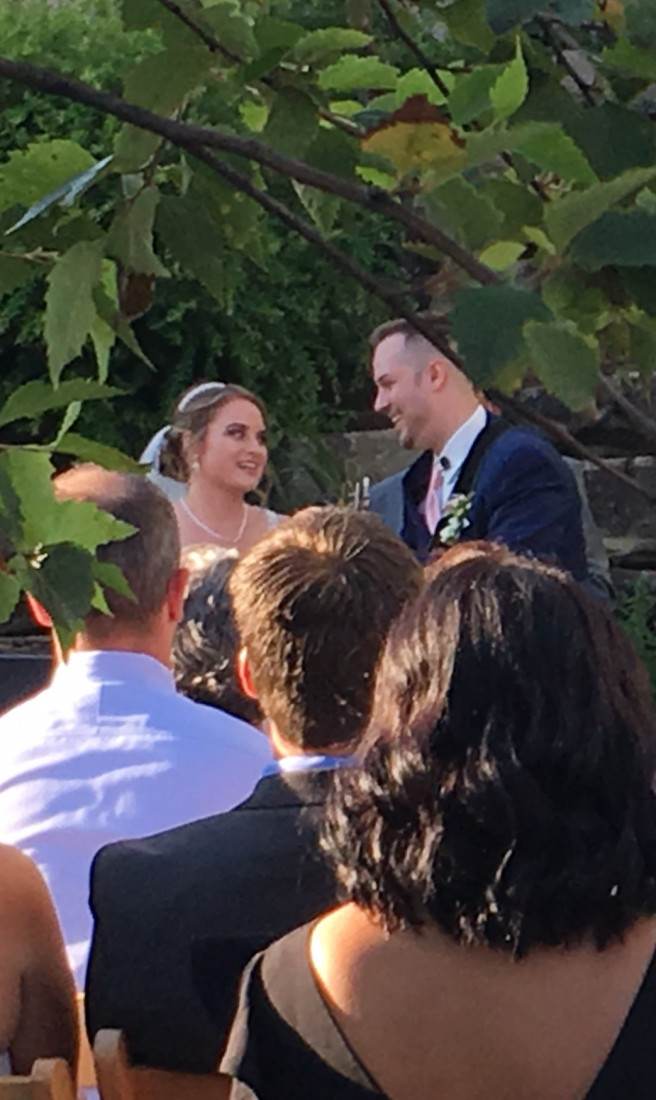 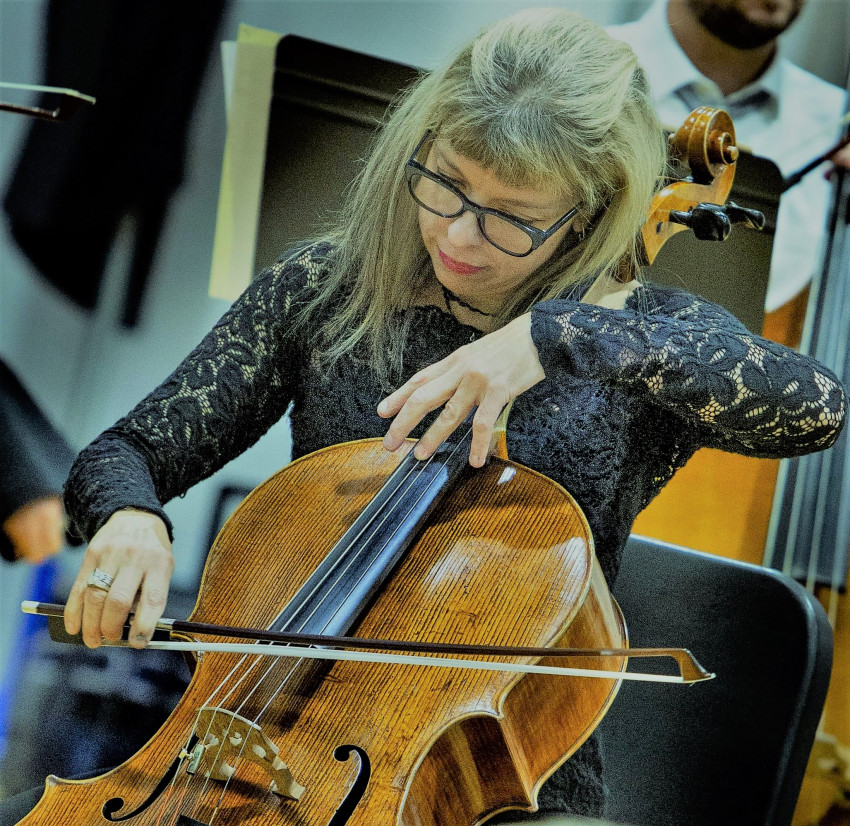 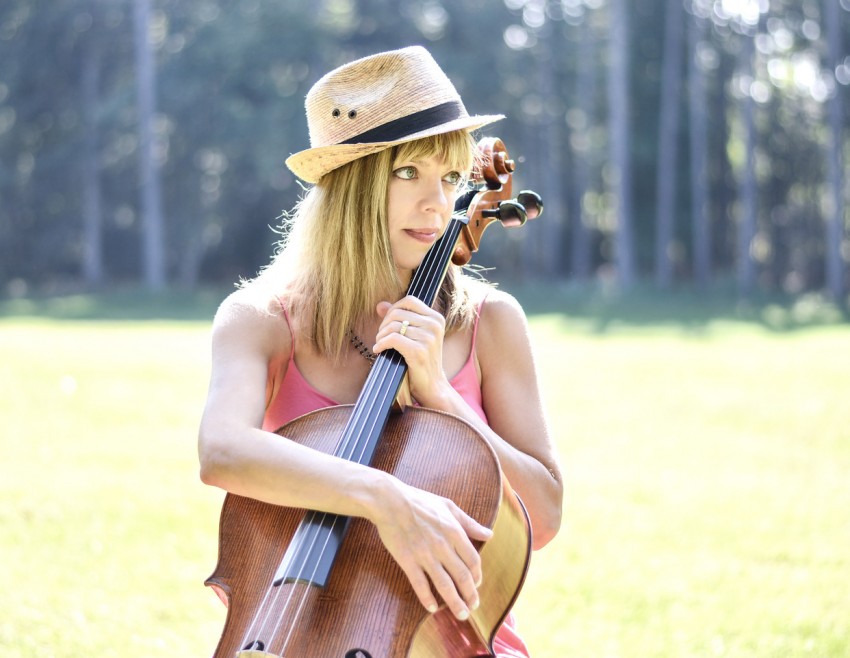 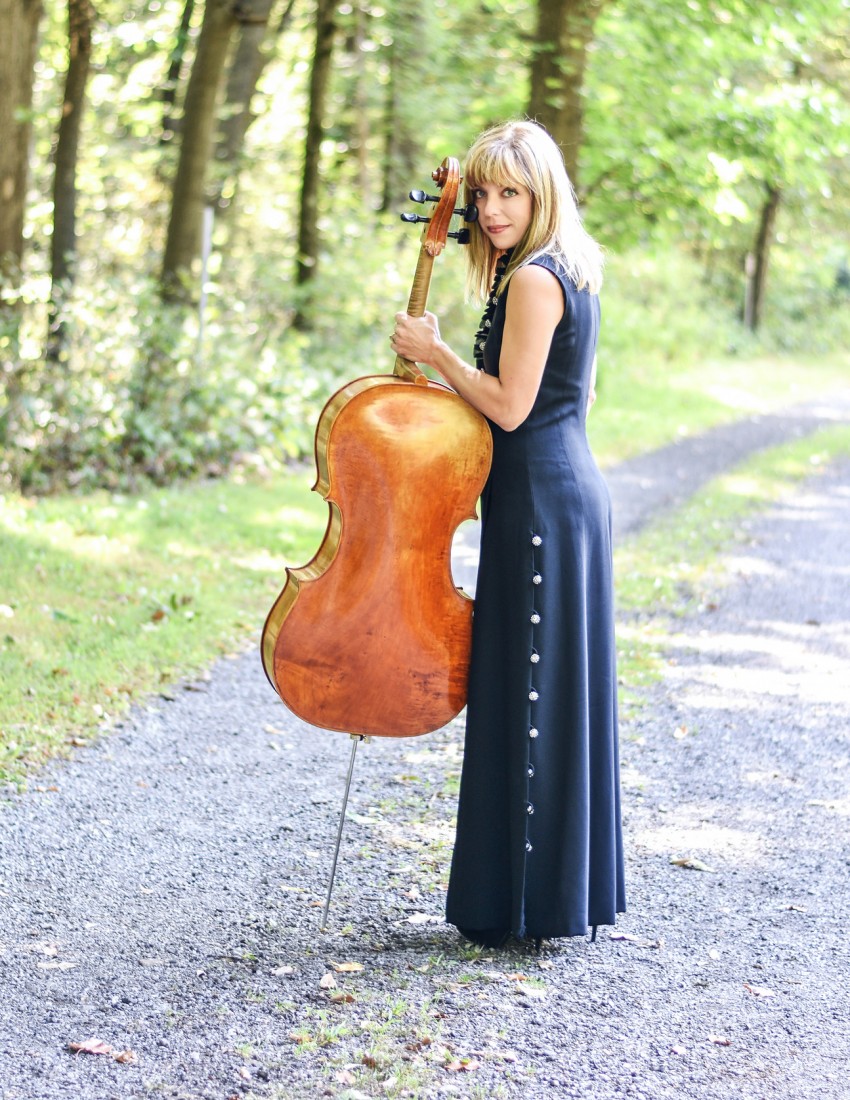 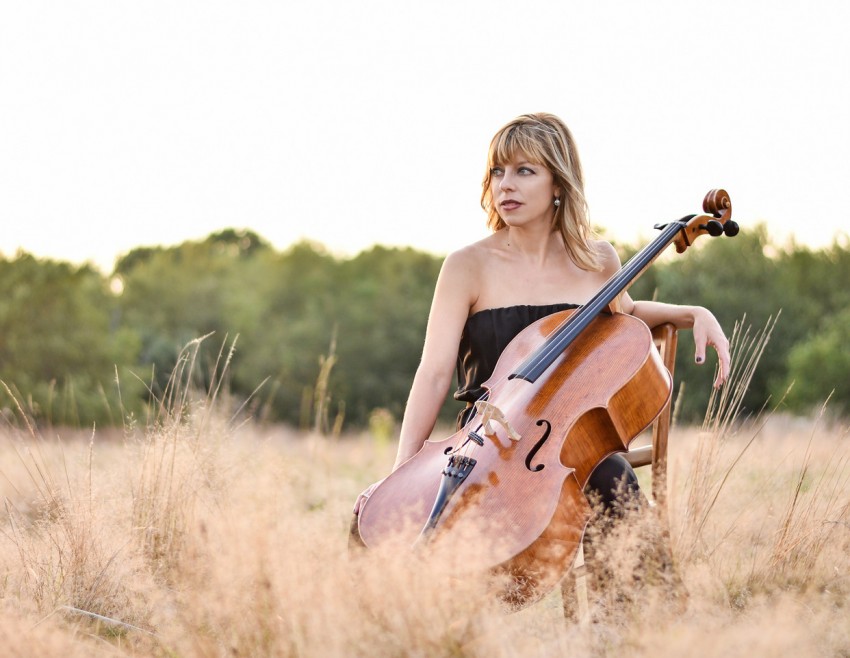 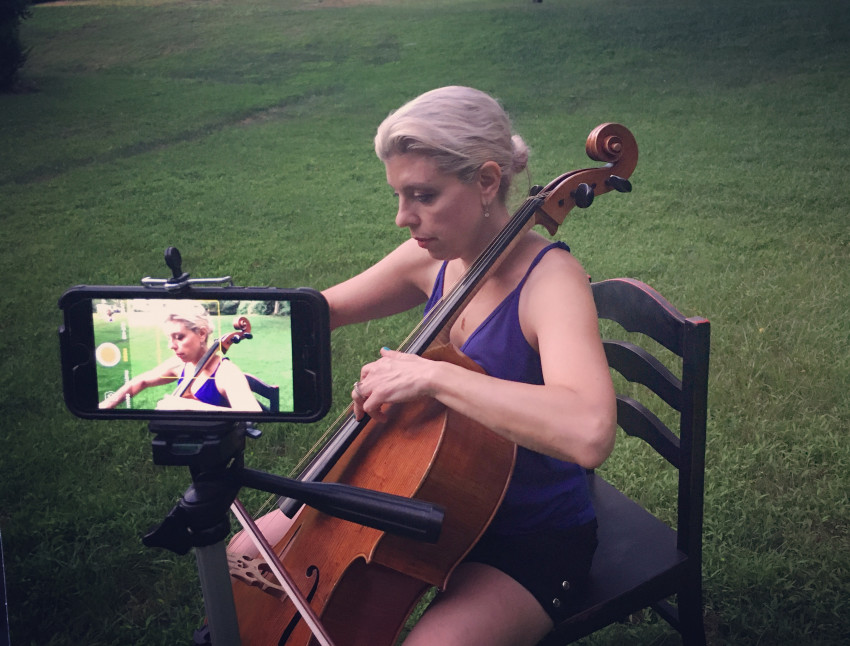 Taking advantage of the lovely weather to do some outdoor playing

Robin Hasenpflug is a seasoned performer providing music for weddings, parties and corporate events. She brings a fresh, exciting style that can be easily tailored to your taste because Robin performs virtually any style of music. Her performing spans many genres, from chamber and symphonic music to sharing the stage with the Trans-Siberian Orchestra, Michael Bublé, and Josh Groban. Whatever the occasion, Robin's solo cello music will add just the right touch.

Ask Robin about her Boutique Packaging that sets the tone for an ultra-luxe musical experience. Enjoy private concerts for a more intimate experience in person or livestreamed.

Robin did an awesome job and couldn't more be please with her performance. Thank you Robin

Congratualtions, Jeff and Lelah!
Thank you so much for your kind words. It was my honor to perform for your ceremony and I am so happy you enjoyed my music.
All the best to you both!

Thank you, Bill! It was my pleasure to perform at your ceremony!
Best wishes to you both :)

Great Cellist and Easy To Work With!

Robin did a great job performing at our wedding! The cello was a nice elegant touch to the ceremony and it was a fair price and Robin was easy to work with!

Great time was enjoyed by all.

We had a great time. We really enjoyed it. Robin made it very comfortable for our family.

Thank you so much for having me perform at the anniversary party! It was such a gorgeous day and you all made me feel right at home. Glad you enjoyed the music!

Nothing short of wonderful!

Robin was wonderful to work with. We had a bit of a nontraditional, semi-elopement style wedding. When our day-of schedule changed at the last minute due to unforeseeable circumstances, Robin gave us several different options for how we could proceed. Robin also went above and beyond and learned some songs that were special to us — one of which didn’t even have sheet music so she wrote it out herself! Although we ended up missing much of Robin’s set, all of our guests commented on how lovely the music was, and my new husband (also a cellist) was so impressed! Thank you, thank you for helping to make our evening so special.

Thank you so much for having me perform at your wedding dinner! It was such a beautiful setting. I was so relieved we could find a way to add my music in spite of the last-minute changes. All the best to you both!

Robin was amazing and really added to the atmosphere of the night!!

Thank you so much for having me perform at Phipp’s. I was happy to be a part of the celebration and thrilled that everyone enjoyed my music!

Robin showed up promptly with her partner and performed beautifully! She was easy to work with and provided suggestions. She was very accommodating and even played a new song I specifically requested! Excellent experience.

I work closely with my clients to curate the exact tone they would like for their events. I am available to discuss not only the main music themes, but also any changes in mood that may be desired. For example, I am happy to perform a wedding prelude of classical favorites and then add some of the clients' favorite contemporary songs within the prelude, ceremony or postlude. We can then transition to more festive music during cocktails, revving guests up for dancing at the reception. I am a multi-genre musician who can help you set just the right mood, whatever the moment or occasion.

Cellist Robin Hasenpflug performs as a soloist, chamber musician and orchestral player throughout the U.S., Canada and Europe. She is a roster artist with Magisterra Soloists, performing chamber music concerts in London and Toronto, Ontario. As a member of the Holter Music Festival, she performed in a concert tour of Italy to audiences in Sacile, Pordenone and Trieste. Earlier in her career, Robin concertized in Kaisersalutern, Germany, the same region where she played with the Pfalztheater Opera Orchestra. In the U.S., Robin serves as assistant to the principal of the Wisconsin Chamber Orchestra in Madison, and appears as principal on their two most recent recordings, Momentum and Mozart: the Early Concerti. She continues her post as principal cellist of the Butler County Symphony Orchestra as well as performing with the Erie Philharmonic and Wheeling Symphony.

Robin’s exploration and broad musical experience has enabled her to share the stage with some of today’s most popular artists. She performs regularly with the Trans-Siberian Orchestra and has played concerts with Evanescence, Disturbed, Josh Groban and Michael Bublé.

A native of Western New York, Robin‘s early studies included lessons with Robert Hausmann of the Buffalo Philharmonic and Bruce Cramer. She received a Bachelor of Music degree in Performance from the Baldwin-Wallace Conservatory of Music where she studied with renowned soloist, Regina Mushabac. From there she went on to earn a Master of Music degree in Performance from the University of Cincinnati College-Conservatory of Music under the tutelage of LaSalle String Quartet cellist, Lee Fiser. An avid life learner, Robin continued seeking inspiration throughout her career in the studios of Eric Kim, Hans Christian Schweiker, Richard Hirschl, Ann Martindale-Williams and David Premo. In addition, she was a participant in festivals worldwide including the Aspen Music Festival, The American Institute of Musical Studies in Graz, Austria, The National Orchestral Institute and the Summertrios Festival in Bethlehem, Pennsylvania.

Ms. Hasenpflug is currently living in Pittsburgh, Pennsylvania where she maintains a private teaching studio and serves as the adjunct cello professor at Westminster College.

Whatever the size of venue or number of attendees, I will craft the right sound for your event. I consult with my clients about sound projection and if amplification is necessary. I will provide my own sound system or work with your D.J. to assure appropriate volume and projection.

My strongest influence today is the cellist, Yo-yo Ma. Not only is he a master cellist, but a very kind and inspiring human. I love his sound and I love his enthusiasm! My favorite composers are Bach, Beethoven and Brahms...the 3 Bs are the best!

I grew up listening to many kinds of music. Besides classical, I listened to the 50s jazz, rock and Indie music. My exposure to all kinds of music has opened doors to my performing with many big names in music today. My clients love that they can request multiple genres within one event.

One armless chair per musician and enough space for each of us to perform (or enough room for myself if solo).