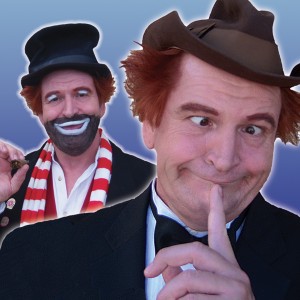 Brian Hoffman as Red Skelton is available for meet and greet, photo opps and can do up to a ninety minute show paying tribute to Red Skelton. The show inccorporates Red's characters, jokes and routines including the Pledge of Allegiance. Show can be customized to fit into any time frame.

Some of Red's characters are Gertrude and Heathcliffe, the two seagulls,
Freddy the Freeloader, the Hobo who lived in the city dump.
Clem Kadiddlehopper, the dim-witted country bumpkin.

This is the best show ever. My husband and I both laughed until we cried. Brian Hoffman's Remembering Red Skelton was one of the best shows we have been to in Pigeon Forge. It was clean comedy and a very moving tribute to Red Skelton. We highly recommend this to anyone who loved the Red Skelton show to see this Tribute. I would give at least a 10 star rating if it were available.

Hello Cleta, Thank you so much for this review and the "highly recommend" seeing this show. Nice to know how much you enjoyed. Till we meet again,..."May God Bless"

Red Skelton (Brian) was wonderful! He was funny, entertaining, no vulgarity, a perfect night with the perfect entertainer. He was a 12 out of a possible 10. Not only does he look like Red Skelton, he sounds and has the same mannerisms! If you need great entertainment, this is the best choice!

Thank you so much for this review. I had so much fun. Loved the atmosphere of your venue. Thanks again for allowing me to entertain you.
Brian Hoffman ~ Red Skelton Tribute artist

Insurance: up to 3 million - will send copy if needed

You will enjoy laughter without the use of profanity. Many of the guests that have attended the show have voiced their opinions about the joy and wonderful memories seeing this show has brought to them. They feel like a kid again sitting in front of their TV as a family and enjoying each others company.

This show will bring a smile to your face and a chuckle to your heart.

Remembering Red - A Tribute to Red Skelton is a fun filled trip down memory lane with Brian Hoffman performing the jokes and routines that Red Skelton made famous. This tribute is a trip down memory lane. The routines include jokes with Gertrude and Heathcliffe, the two seagulls. Wisdom and fool hearted wit from Clem Kadiddlehopper. Plus a couple three pantomimes and the insight as to who Freddie the Freeloader, the hobo who lived in the city dump, really is.

The show is customizable for any event and can fit into any time frame up to 90 minutes.

Brian is available as Red Skelton or his characters before and or after the show and will be made available for meet & greet and photo opps.

Brian Hoffman started his stand up comedy career in 1995 in Ohio. He performed in clubs and private engagements for several years as people insisted that he reminded them of the late great comedian and actor Red Skelton.

Several years of studying and reviewing as many Red Skelton shows as he could get his hands on has resulted into a career of headlining in Las Vegas.

The show is very low maintenance as far as lighting, sound and ques for the sound tracks that are used for the pantomimes and other acts that are performed during the show.

Need to have a microphone on a mic stand. Prefer corded

Lighting is simple, all that is required is a follow spot. a dimly lit room and small stage.
Need a CD player and someone to do sound ques. Easy to do and if set up correctly, the follow spot person could do it.

Need a couple of small tables,( approximately 24" square or round)

I do comedy so I don't have a set list.
Will provide a rough list of routines if you request

corded mic on a mic stand