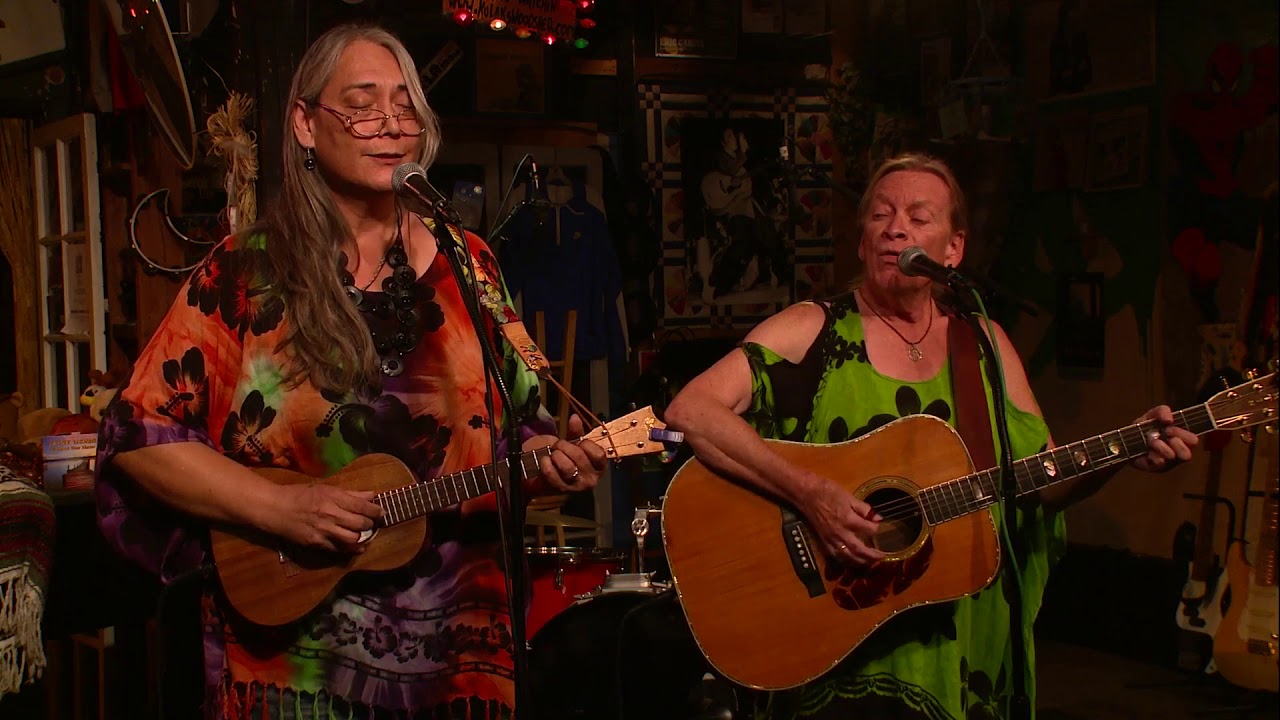 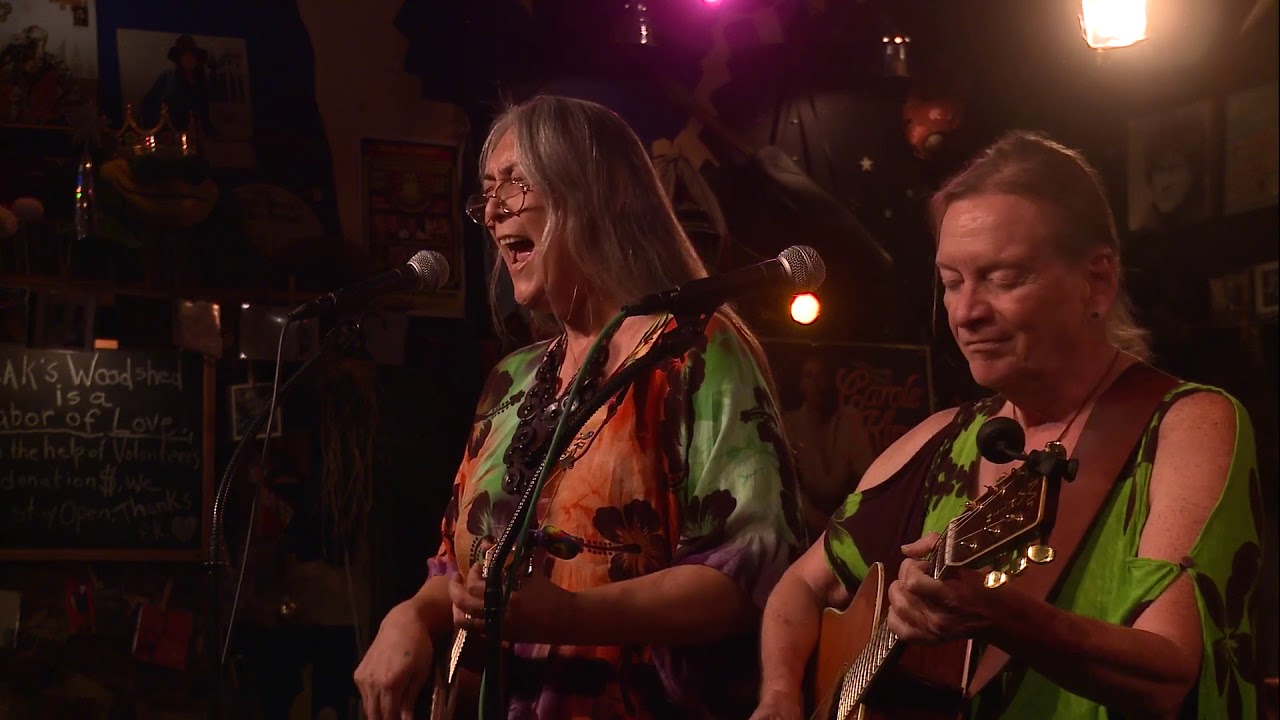 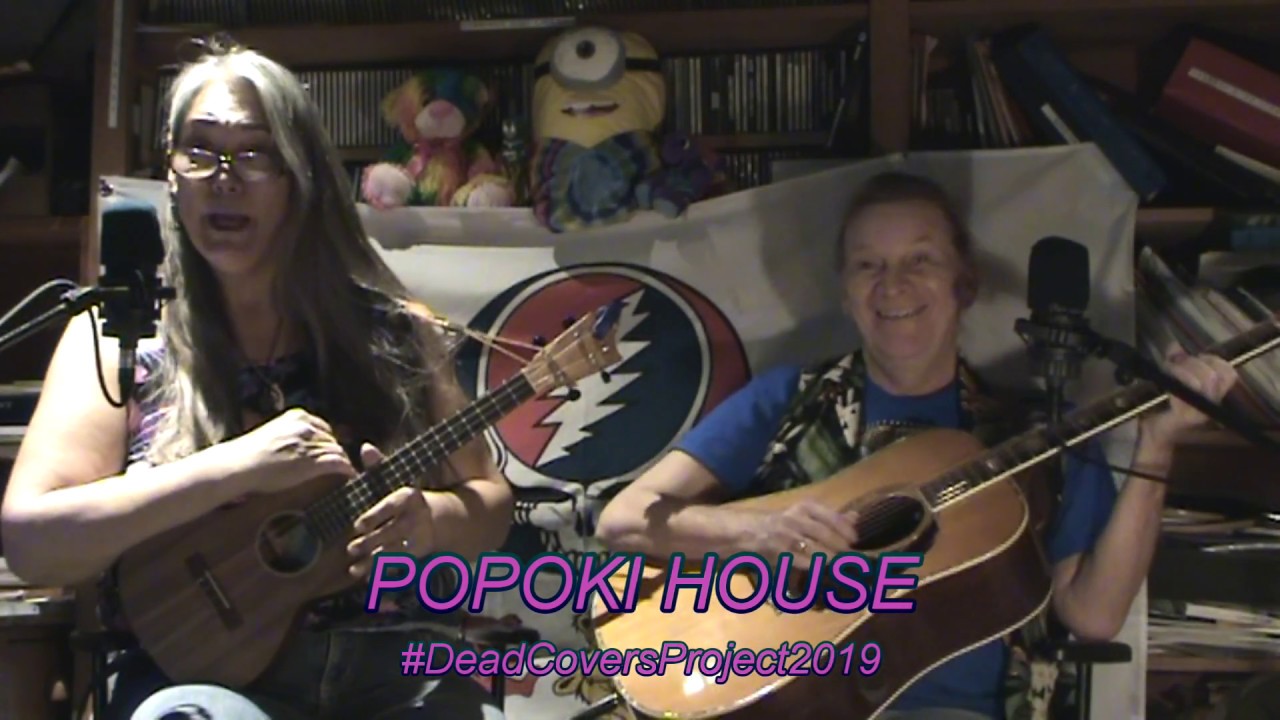 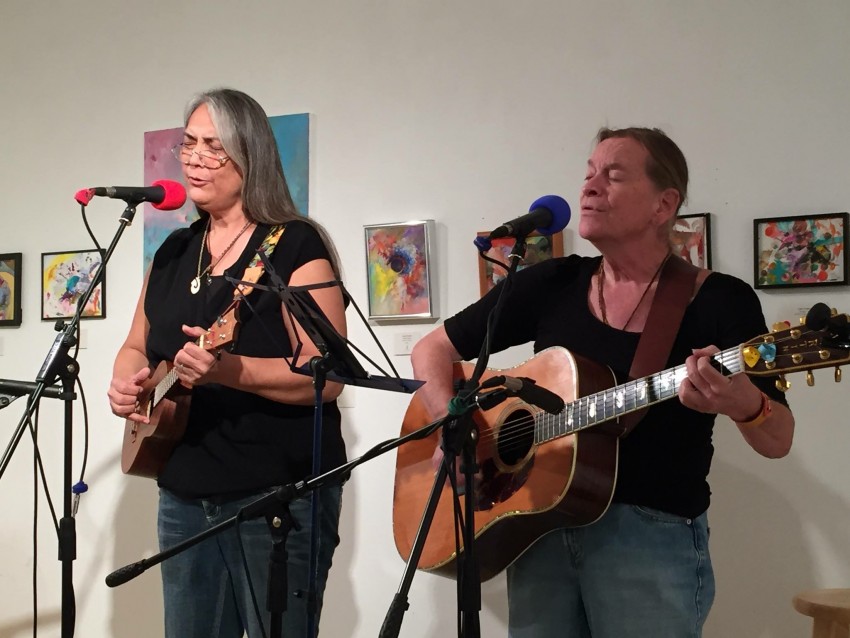 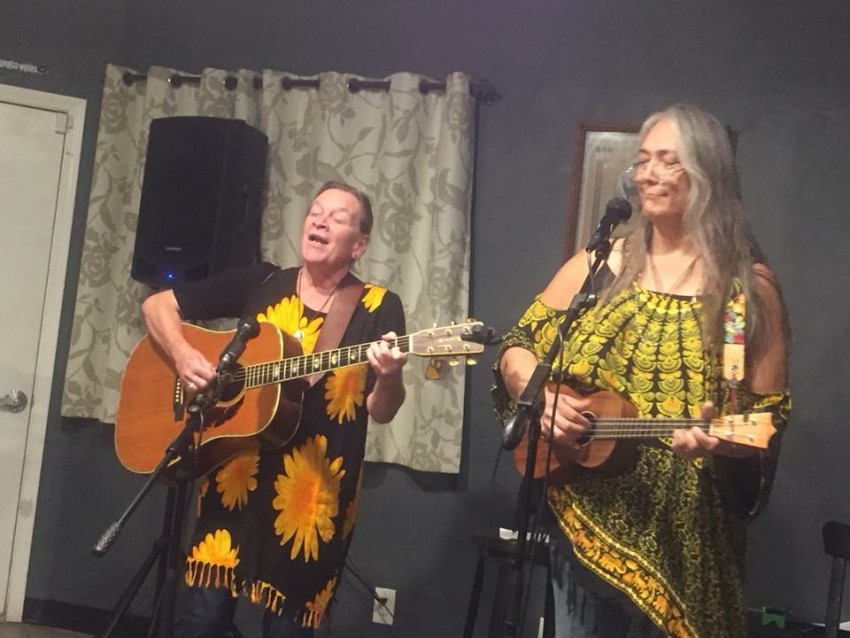 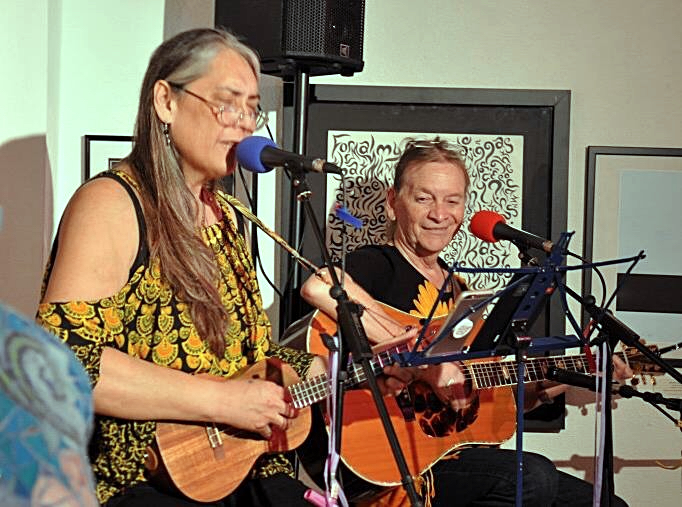 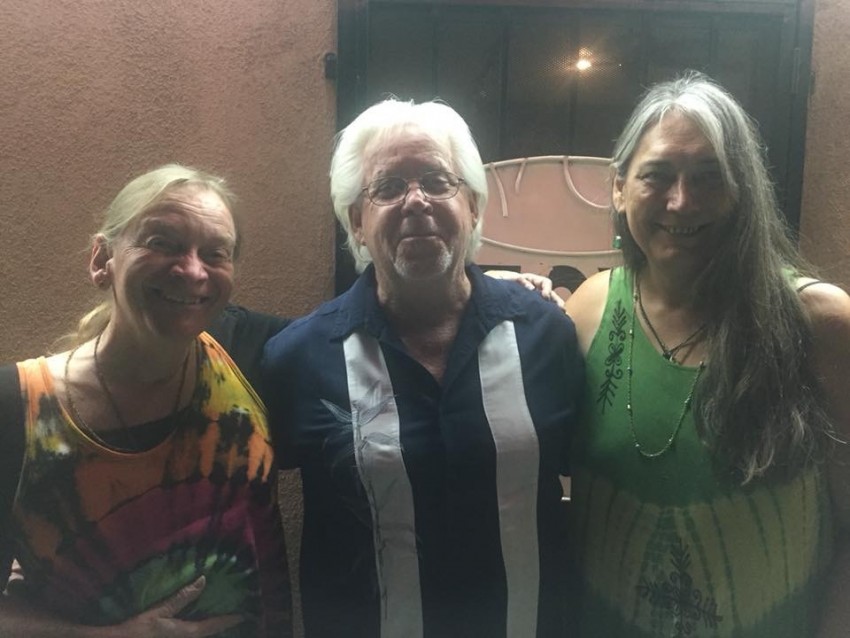 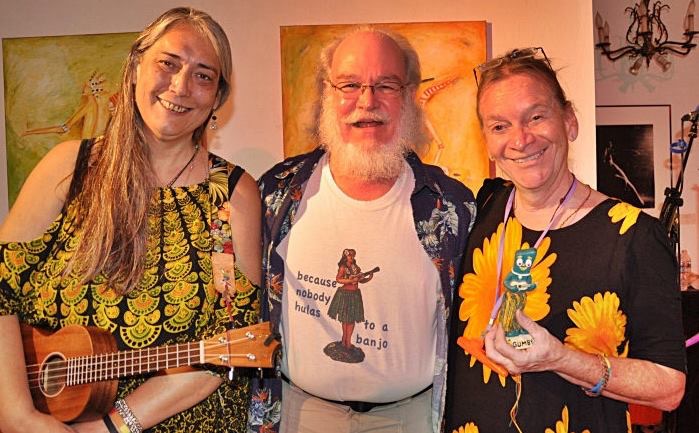 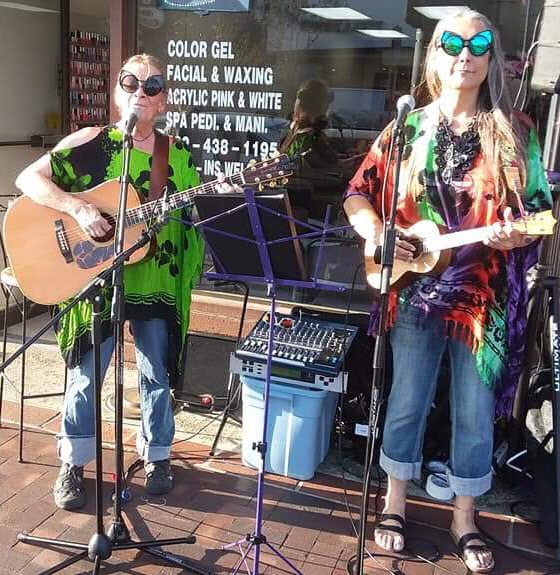 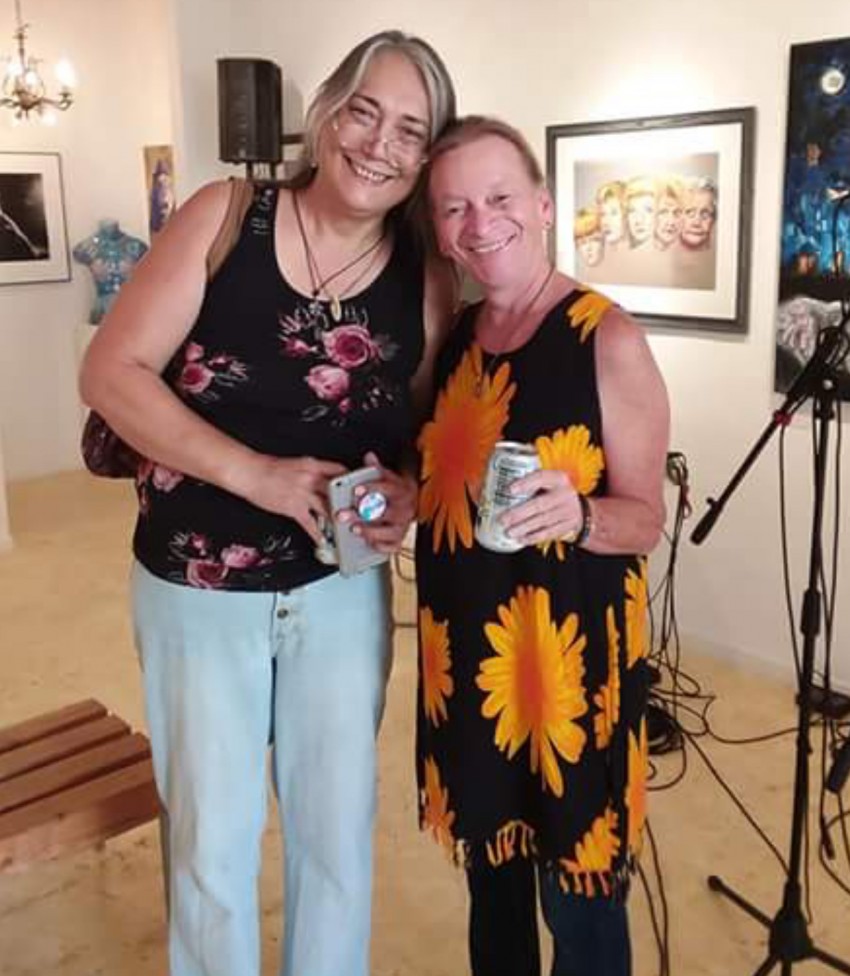 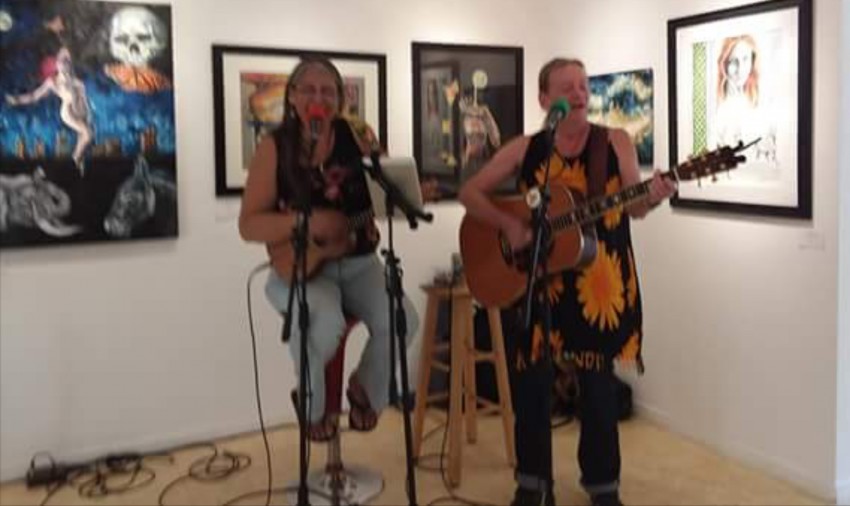 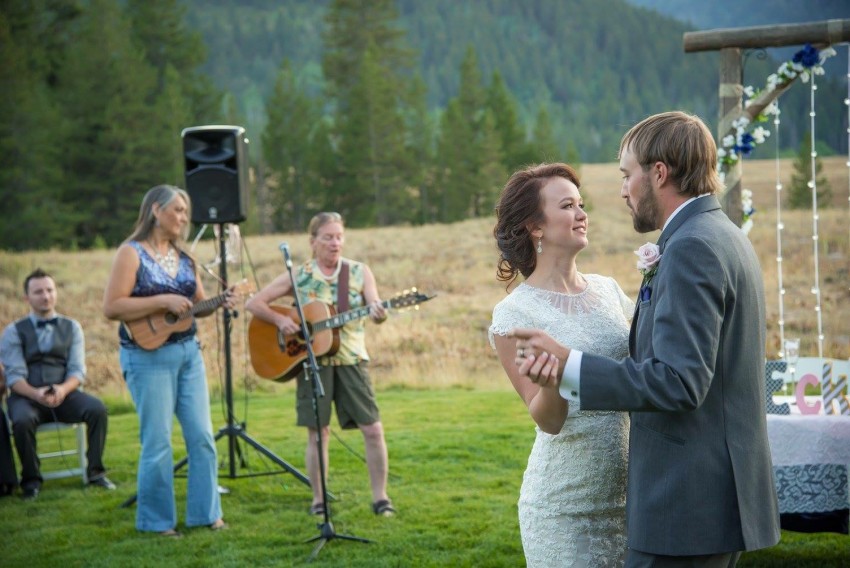 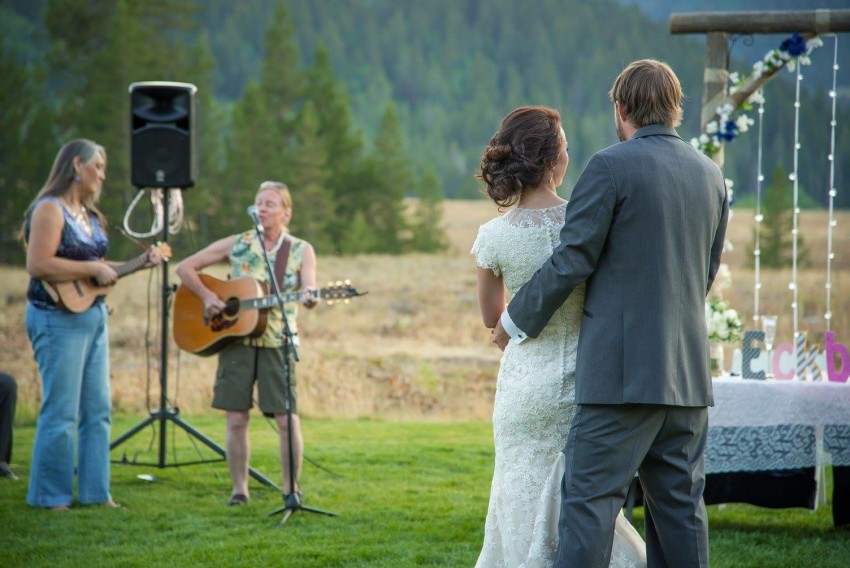 Popoki House is the guitar and ukulele duo made up of two crazy cat ladies who thoroughly enjoy entertaining their fans in Southern California with their unique and skillful blend of Americana, folk, blues, jazz, country, and Hawaiian music they call Hawai'icana, a kind of Island Americana hybrid.

It only takes ten strings and two hearts (and a couple of crazy cat ladies!) to create beautiful Hawai’icana music!

Popoki House is LGBTQ-affirming, socially-conscious, and welcoming of all people no matter where they come from, and we love performing as much for our community as we do any other! Let us set the tone for your special event!

Popoki House Performance at Back Home in Lahaina

Katie (guitar) and Taeri (Ukulele) are two multi-talented seasoned musicians and singers. They rocked the house with a variety of great acoustic music from Over the Rainbow to Fat Bottomed Girls and more. Although a duo, their melodic vocal harmonies made them sound like more. They not only sounded good but they looked good with colorful outfits. I would recommend them to liven up any party or performance.

I have booked these ladies for three different gigs, and never been disappointed. You will hear nice vocal harmonies over tight instrumental arrangements. They perform a range of Americana and Hawaiian songs, all with their unique twist. The audience loves them.

From classic covers to folksy originals, Popoki House's lush harmonies and brilliant instrumental work creates a rich tapestry within dynamic arrangements that remind listeners of a cross between the Indigo Girls and the Grateful Dead, harkening back to folk singers and songwriters of the '60s.
Popoki House — using ten strings and two hearts to make beautiful music!

KATIE BLANCHARD
Born into a family of musicians, singer-songwriter Katie Blanchard’s relationship with song began with the vinyl records that were played by her family to pass the time as they waited for prematurely-born Katie to grow well enough to leave the hospital. Her mother loved musicals and jazz, while her father preferred country music, and her brothers playing those albums in the hospital helped to settle the crying baby enough that she was soon healthy enough to go home.
By age three, Katie was singing pop songs from memory, and performed at school functions, choirs, and her brothers’ garage band rehearsals, where she was further introduced to a wide range of influences including The Beatles, Nat King Cole and Roger Miller. For her fifteenth birthday, Katie was presented with a guitar. “Never forget, your guitar is a drum,” her brothers reminded. The rest, as they say, is history.
Katie has performed in venues ranging from road houses to concert halls. She has studied opera and classical voice technique, with her vocals described as, “soaring, with an Ann Wilson quality.” Katie’s guitar playing reflects the eclectic nature of her family’s musical tastes while developing her own style of performing. Her dreadnought acts as her second voice, thundering and roaring, moaning and singing while pounding out the groove and exploring her unusual interpretations of melody, riffs and chord inversions. Think Brian Setzer meets Ricky Skaggs, with Bonnie Raitt and Indigo Girls as the opening act.
In her other life Katie is an accomplished concert, theater, and nightclub audio engineer and sound designer who has worked with everyone from Debbie Reynolds to Ann Margaret; from Jake Shimabukuro to Albert Lee.

TAERI SCHIFFMAN
Singer-songwriter Taeri Schiffman is what happens when a classically trained, queer deadhead musician rediscovers her Hawaiian roots. Born on O’ahu but raised in the homeland of Napoleon Dynamite — the wilds of Cache Valley, Utah and environs — Taeri applied her skills as a multi-instrumental band and musical theater geek to her Native ukulele. “I was horrified at the prospect of playing one note at a time on a horn the rest of my life! And the spit! Ugh! With the ukulele I get actual CHORDS! Imagine, four notes - at the same time - with no spit! Six strings seems extravagant, and since I’ve got four fingers...”
Not content with playing to a cliche’ — a Hawaiian woman strumming her uke — Taeri brings her training as a sight reading devotée of music theory to bear, covering multiple styles including jazz, folk, blues and rock. Her voice is a lush lyrical contralto whose influences range from Amy Winehouse and Billie Holliday to Indigo Girls. Taeri delivers cover songs and original compositions with equal passion and a sincere depth born of her devotion to the art form.
Whether performing a bluesy Grateful Dead jam or adding a touch of jazz to Americana roots music, Taeri joyfully uses her decades of experience to bring her love of music to appreciative audiences.
Taeri’s eclectically diverse musical influences range from the Grateful Dead, Israel Kamakawiwo’ole, Weird Al, Tom Lehrer, John Prine, Robert Hunter, John Perry Barlow, Sting, George Harrison, ELO, the Indigo Girls, Doobie Brothers, Sister Rosetta Tharpe, Billie Holiday, as well as Bach, Beethoven, and Tchaikovsky.
In addition, Taeri earned her bachelors degree in psychology from Cal Poly-SLO, and her masters degree in social work from USC (Fight on!). Today she chooses to devote herself to music full time, following her bliss and utilizing her experiences as both a social worker and student of human behavior to influence her songwriting writing and performing.

Popoki House is an acoustic duo consisting of two vocalists playing ukulele and guitar. Two vocal microphones, and two direct inputs are all we need. One monitor mix is our minimum requirement for foldback.

Katie approaches music from her position as a long-time country-bar band guitarist and vocalist who has been performing in bands since a young age and is influenced by musicians such as the Rolling Stones and Ricky Skaggs, while Taeri's approach to music comes from years of classical training as a young cello and symphonic brass player, including euphonium, French horn, and tuba, and is influenced as much by ELO and the Beatles as Tchaikovsky and Beethoven.

Put it all together and they create the Popoki House sound we call "Hawai'icana!"