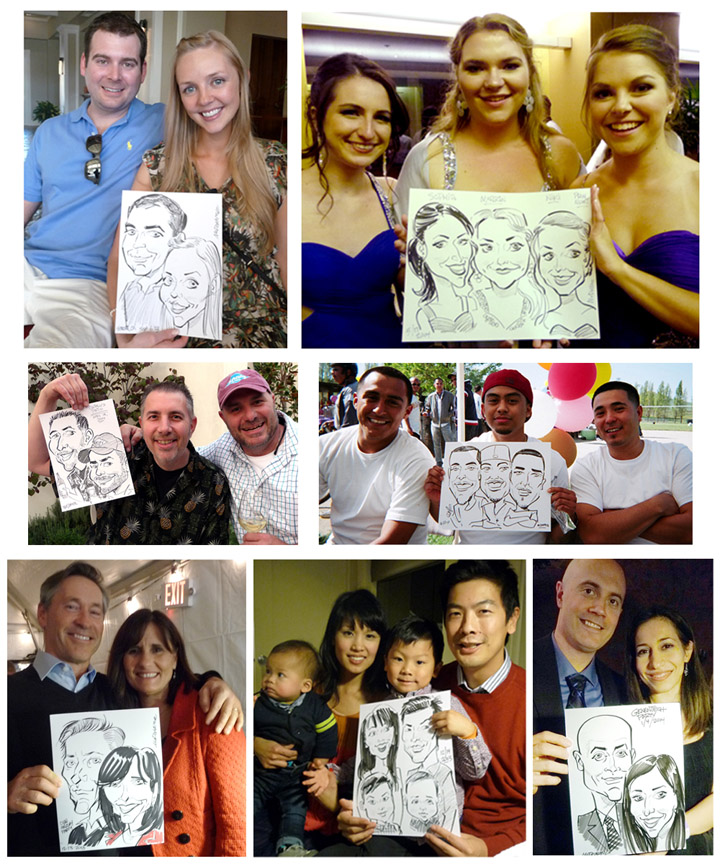 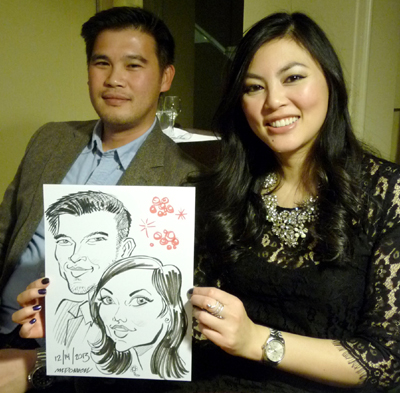 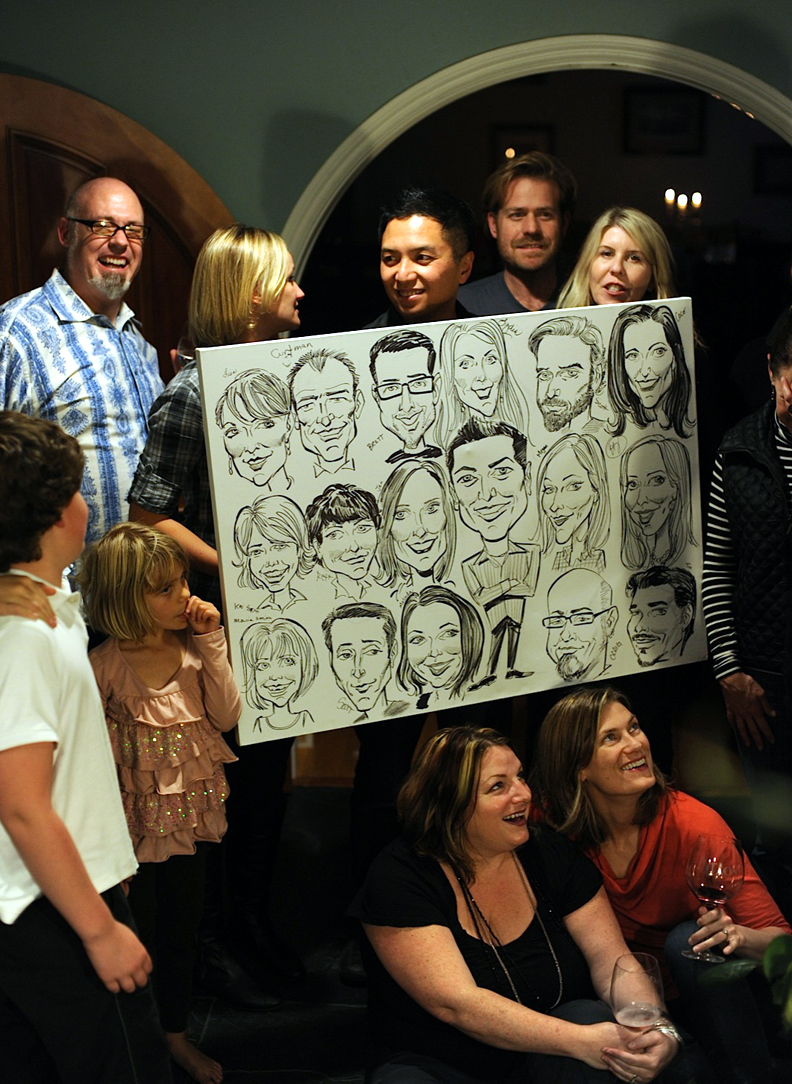 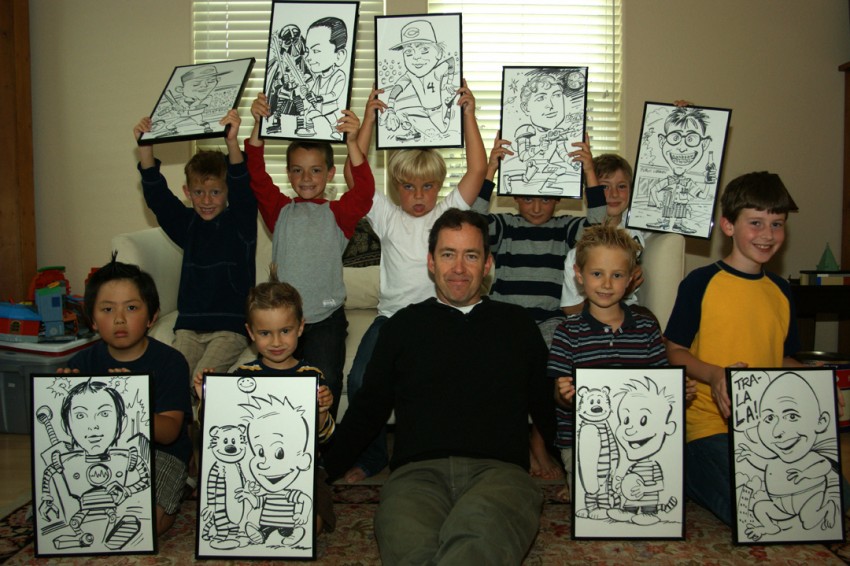 The Kids are Alright! 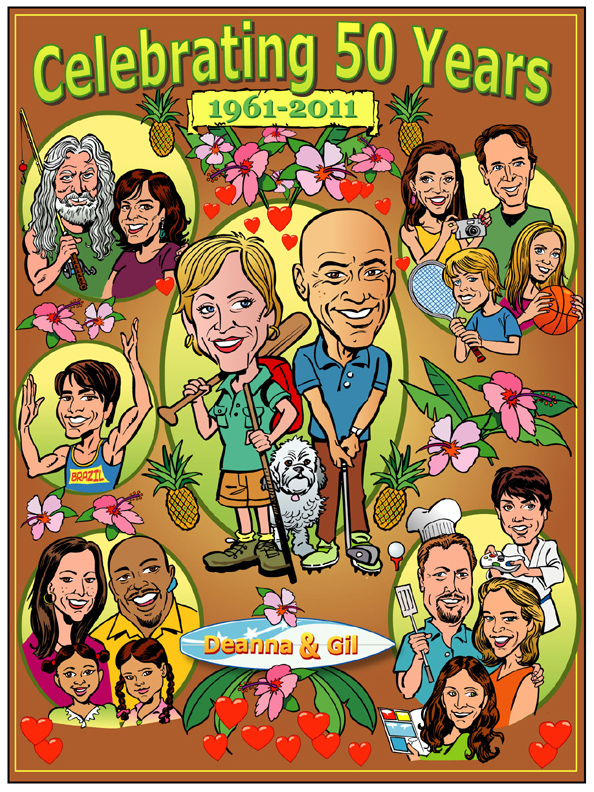 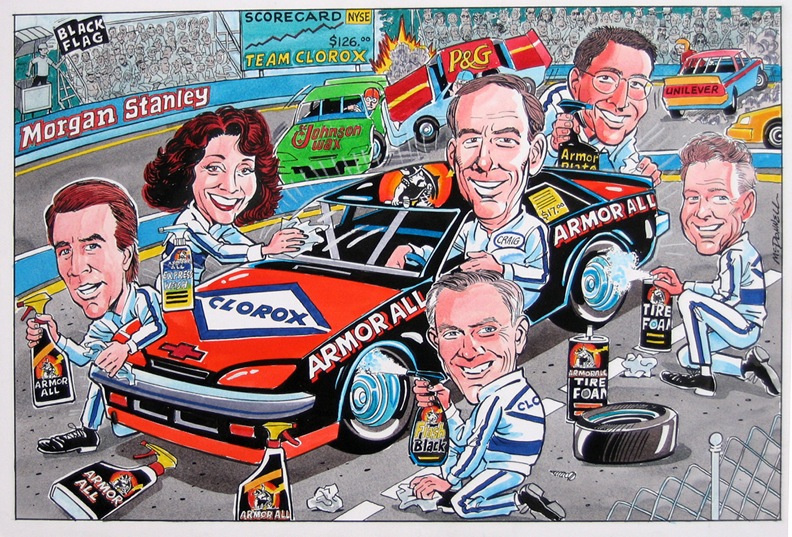 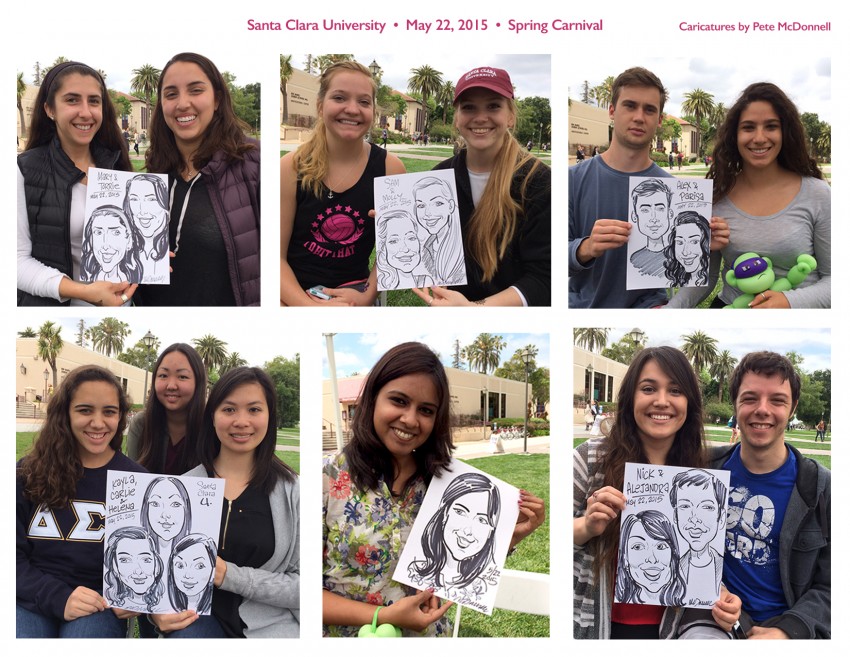 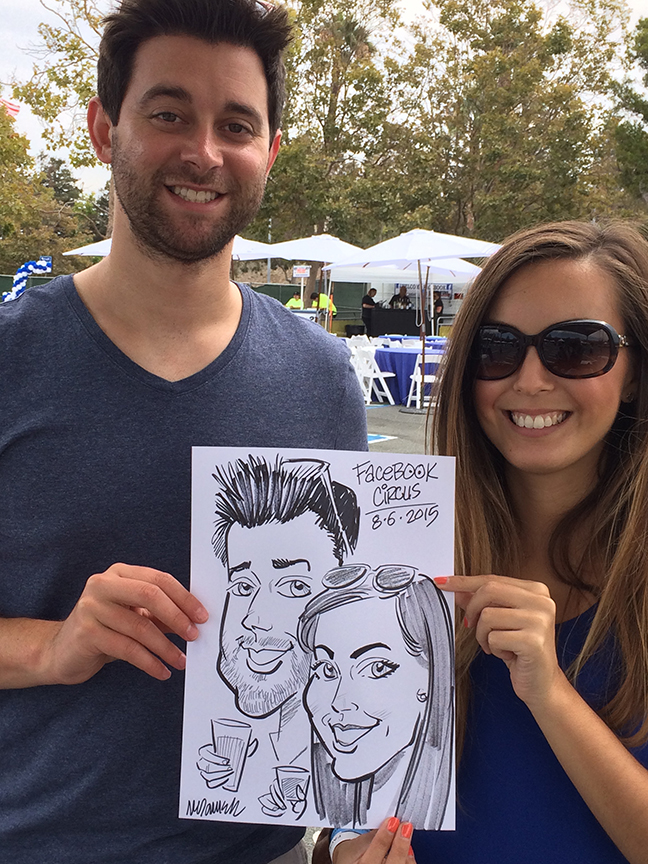 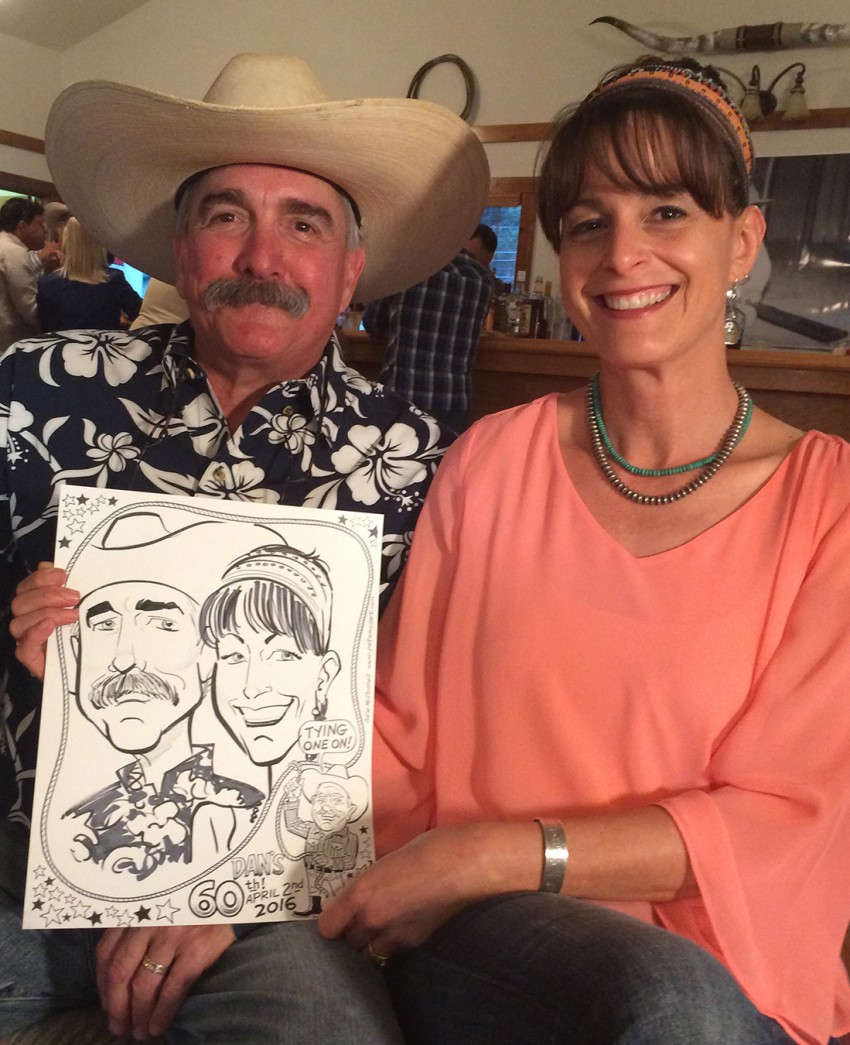 Birthday at the Novato Horsemen's Club 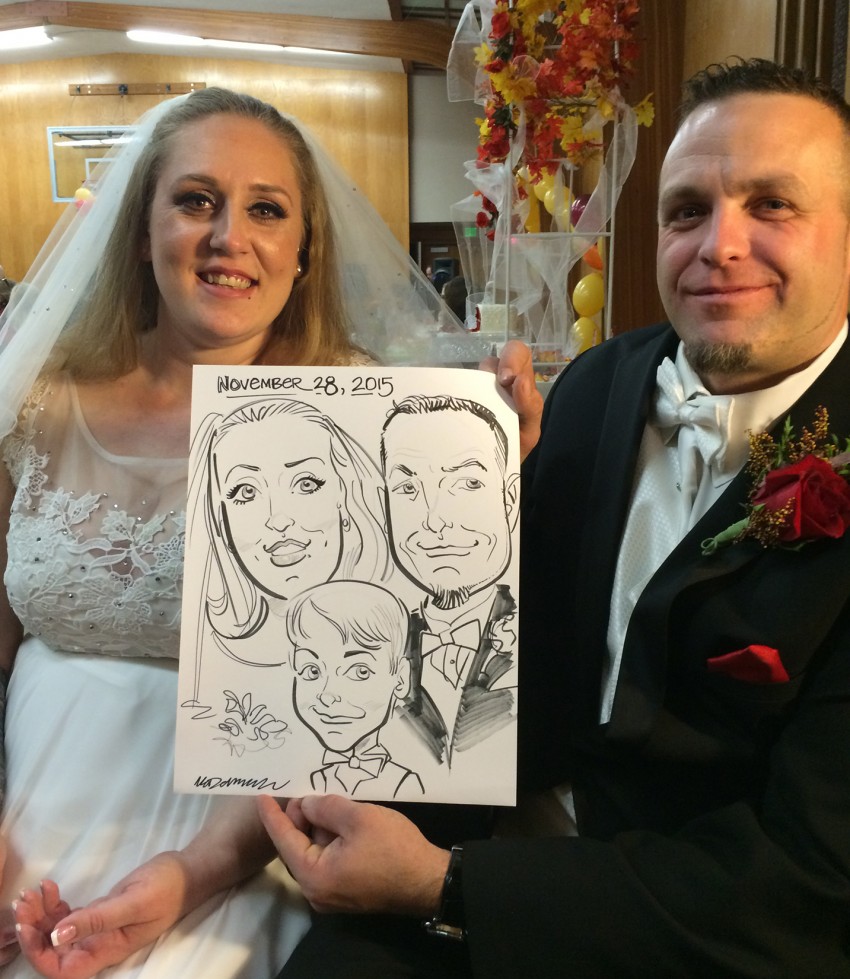 A wedding portrait of the happy couple.

I draw fun, fast and amazing caricatures for every sort of party & event. My caricatures are humorous, but accurate. The usual sort of comment I get is, "That really looks good, but it looks just like them too!"; I try to get a good likeness, but in a cartoony fashion, with attention to detail. I don't just do the typical tourist-trap kind of drawing, but something more suitable for framing. My primary profession is as an illustrator for commercial art clients, so my work is generally a cut above what you get with some other artists. If you're interested in hiring a caricaturist for your next event, I hope you'll consider me.

Great addition to our company party!

Pete was very professional and the attendees had a blast! I would highly recommend Pete for his caricature services to everyone

Thanks Kat, I had fun drawing at your company party..!

Pete was an amazing addition to our farewell party. He was kind and patient and incredibly creative. Our guests were blown away. I would highly recommend Pete to anyone!

Thank you for the nice words Beth! I enjoyed drawing at your event yesterday...a nice group of people!

Pete was the perfect addition to my event. He was on time, easy to work with and provided guests with beautiful drawings! He was detailed in his work but still fast and efficient. We had over 300 people attend our event and he managed to get the job done! Thank you Pete! Hopefully we will get to work with you again soon.

I appreciate your review, McKenzie, thank you! It was a busy evening and a fun event. I'm looking forward to working together again.

Pete was worth every cent!! His work is amazing, all of our guests were so excited and pleased with the likeness of their drawings! We recommend, no... we HIGHLY recommend his services! Thank you for your time, you are such a talented artist. Thank you for capturing so many smiles, until our next event, bless you!

I am very glad that you were happy with my work Melanie! Thanks for the great review!

We were thrilled with his work. Kids loved it and so did the parents. Highly recommend

Thank you Tara! I had fun drawing the kids, and I'm glad you were happy with my work.

I've had the pleasure of booking Pete for a few years now at our company picnic, upwards of 1400 guests. He is a pleasure to deal with, reasonablyou priced and very professional. Would not hesitate to invite him back.

Thanks Tami. I appreciate your kind words...looking forward to the next Medtronic picnic!

I am a caricature artist who works well with people, from the littlest kids to the grandparents. I'll even draw babies (they never complain about their likenesses)! I have drawn caricatures at superhero-themed birthday parties (I draw every kid as their favorite character), a Bar Mitzvah at At&T Park, on the Hornblower yachts, at Twitter headquarters, at Facebook's annual picnic/company party, at dozens of high school grad night parties, in Golden Gate Park, at wineries, private homes, corporate events, you name it. I draw likenesses that capture a person's better features in a humorous but accurate style. I sometimes add color, but that is generally slower to do. I will also create an illustrated pre-printed design on the paper if requested (for an additional fee).

I am a free-lance cartoonist/illustrator/caricature artist; I have been a self-employed artist for almost 30 years. I studied illustration, painting, drawing and animation first at the California College of Arts in Oakland, CA., then at the Academy of Art in San Francisco, CA. I have drawn comic books for Marvel, Dark Horse & Hero Comics. I was hired by BGP to draw a comic book for the Rolling Stones concert at Candlestick Park on their "Tattoo You" tour, I drew a comic strip series for National Geographic's Kids magazine, and I have been published by the Wall Street Journal, Popular Science magazine, CRACKED magazine, and many others. Illustration & storyboard clients have included Neiman Marcus, Microsoft, Disney, Green Giant, Seagram's, Nestle's, A&E's The History Channel, Southwest Airlines, EMC and Cisco Systems. I've drawn caricatures at many events for companies like Facebook, Sony Playstation, eBay, Twitter, as well as dozens of winery, grad night, and private events. My work is professional looking and I have provided thousands of caricatures for hundreds of satisfies clients.

I don't require anything more than a couple of chairs. If it's outdoors, I prefer to have a shady spot. If it's at night, I would need an electrical outlet nearby to plug my lights into.

As a caricature artist, I enjoy the work of artists like Al Hirschfeld, Mort Drucker, David Levine and Ronald Searle.