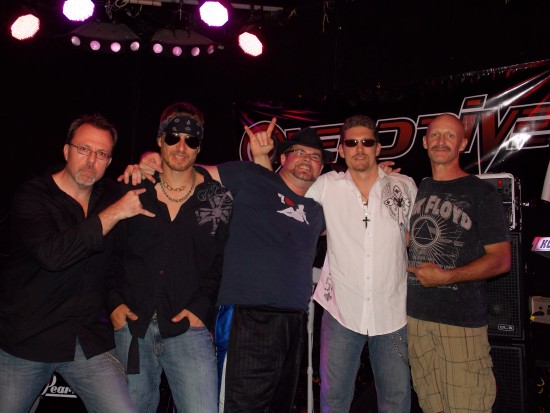 Members of the Band 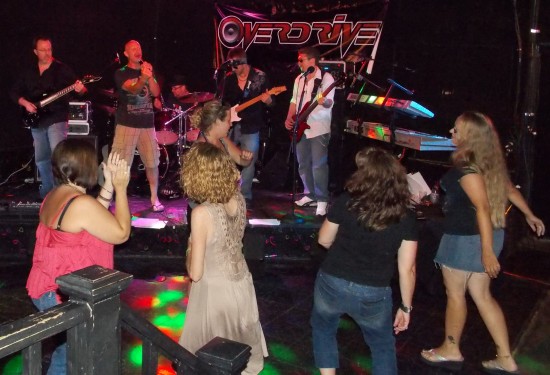 Rock'n with the Fans 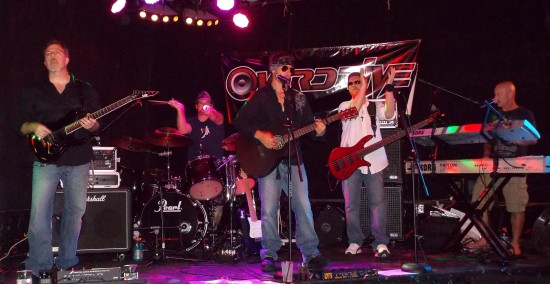 I've seen this band play several times at various local bars. They are always great! I can help but to sing, get up and dance as the rock out songs that everyone knows and loves!

Whether it was on the radio of your dad's borrowed car while cruising the main drag in your old hometown, or live on the stage in the arena that you heard some of these great tunes for the first time...we're taking you back there and it's gonna be a party! For high octane rock & roll that spans the great hair bands of the 80's to the revitalized rock sounds of today, OverDrive is your show. Come see for yourself!!

BRIAN: Originally from northern California, he moved to Kansas City about 3 three years ago and has always had a passion for music. As a child he took piano lessons and then moved on to drums in high school. He traveled with the high school audition choir and played in a few different garage bands. He enjoys a wide range of musical influence, including Def Leppard, Van Halen, Dave Matthews and Chevelle.

LAMAR: Grew up in South Kansas City and started playing the violin at age 6, then switching to guitar at 13 years old. His first influence was Ozzy Osbourne, and from there it became guitar greats like Eddie Van Halen, Steve Vai and Yngwie Malmsteen. The list just keeps on growing and once you hear this guy play you'll understand why he's called "Guitar Lamar."

NICK: Born an Okie from Muskogee, transplanted to St. Joseph, Mo. and now rooted in Kansas City. Nick started playing in bands in the early 80's and into 1990...and has always been involved in bands, no matter the decade! He also does a lot of his own writing and home recording. When asked who his influences are he states, "My list starts with Rick Wakeman from YES, and ends with Steve Walsh of KANSAS.

SCOTT: Born and raised in the K.C. area, he was influenced by music from a very early age because of the extensive record collection owned by his parents. He tinkered with both the guitar, and the piano, that his family owned. He played trumpet and violin durning early school years and eventually moved to bass. Playing in band and orchestra he admired Bach, Mozart, and jazz greats Rufus Reid and Jaco Pastorious. Later, he would grow to admire bassists Geddy Lee, Cliff Burton, and Billy Sheehan.

RYAN:grew up in Olathe Kansas & started drumming @ age 7. He grew up listening to Deep Purple, Van Halen, Kiss, Led Zeppelin, Black Sabbath, Clutch & Slayer & moved to Independence in 2005. His passion for drumming bores people to sleep, tears & even death. . . .Best to not get him started! Ryan has been featured playing with MANGRY SKWAK, & JOHNNY ROKKER'S "METAL MERCENARIES" & The "POPCORN NINJA (THE KERNEL) " with POPULATION NOT. RECENTLY KICKING IT INTO "OVERDRIVE"

We have full professional sound reinforcement and stage lighting. Our goal is to deliver a concert quality show.