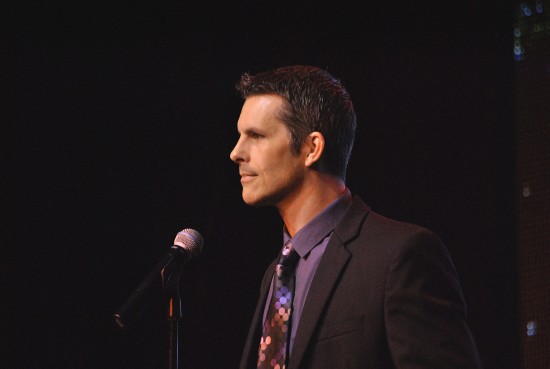 Nathan has a over a decade's worth of solid comedic material that he chooses from to create a show featuring the most appropriate material for your audience. He can craft a performance for adults ages 18 and up that ranges from a PG rating to an R-rated show.

Nathan has performed for audiences of all kinds, including blue-collar sanitation workers, white-collar professionals, nursing home employees, parents of high schoolers, military vets, and hundreds of active duty military members stationed in Iraq, Afghanistan, and elsewhere around the world. He's able to travel far and wide to meet your comedy needs.

Testimonials aplenty can be provided upon request.

Nathan Timmel was entertaining! All attendees said they enjoyed him and it went fast. They wanted more.
He told us when timer was done however we weren’t positive when he started it, as it did seem shorter than planned. We would hire again and consider longer time.
Recommend him

Did a great job relating to the audience. Very funny.

Nathan was easy to work with, friendly & very funny!

Nathan was prompt in communicating before the event and performed a great show !

Hope was a pleasure to work with, and made the evening flow wonderfully.

When other comedians say "you have to book Nathan Timmel", I listen. I'm so glad I did. From the painless process of booking, to his professional demeanor and first-rate, non-stop-laugh performance, Nathan Timmel delivers. The crowd at our show at The State Room in Quincy, IL, couldn't get enough. Nathan's shows flow smoothly from one hilarious story to the next. An excellent story teller, you'll relate to his views on life as a single guy to married life. Throw kids into the mix and you've got comedy gold that everyone can relate to. If you ever get the chance to see one of his shows or, better yet, book him for an event, by all means do it! You will not be disappointed.

“If you have not heard Nathan Timmel, you are missing a GREAT show. Nathan put together a fundraiser for us (English River Outfitters …. Veterans Reaching Out to Veterans) and it was HUGE success. Nathan is a 100% patriot and really supports our troops/veterans. Thank You Nathan for a truly hilarious show…I can’t express enough what it means to us; I can’t wait to work with you on another fundraiser."
– Chuck Geertz, Owner English River Outfitters

“Nathan is a tremendous talent who never fails to show a crowd a great time. He uses witty banter and insightful quibs to keep those in the seats ready and waiting for more. Requests by the audience for Nathans return came no sooner than the close of each of his show.”
– Adam Webber, Owner/Booker Laugh, Bloomington IL

“You had the bartenders laughing so hard they stopped serving people.”
– Kat Jackson, Volunteer, Comedy for Charity St. Baldrick’s Event

“You were absolutely fantastic. After the show everyone was coming up and asking who you were. Definitely got the entire crowd going, not just a few. From start to finish it was like boom, boom, boom. No question we are going to want you back. Next time we’ll even provide the crates and microphone.”
– Jason Reinke, Owner Reinke Entertainment/Back Alley Comedy

“For our Christmas party, we wanted to do something different than the usual meal and gift exchange. A friend suggested comedian Nathan Timmel–what a great evening! Nathan had a way of talking to the crowd as if he knew us personally (sometimes very personally :) and had people roaring with laughter most of the time. We had great comments from our team members and true appreciation for giving them a fun night out. Hope we can do it again next year!”
– Chris Marshall – Executive Director, Wesley Halcyon House

“When I saw you perform at The Funny Bone, I knew you’d be perfect for our fundraiser. ‘Outstanding!‘ ‘A great storyteller,‘ and ‘two thumbs up!‘ are just some of the raves I‘ve heard about your show so far, and I keep getting major kudos for bringing you here.”
– Beth Davis, Chair – Appanoose County Heart Committee, Centerville, IA

“Nathan Timmel brings an original twist to common experiences and thoughts. You’re often caught off-guard when he seems to hit below the belt on various topics. Then, you realize he makes a point as he makes you laugh. He’s refreshingly unpredictable!”
– Samara B. Palubiski, Booking Agent The Comedy Cafe Milwaukee

“Regardless of age, race, or gender, Nathan Timmel’s show is not to be missed. His common sense look at our world is almost as eye opening as it is hilarious."
– Mark Klampe, Owner, Goonie’s Comedy Club, Rochester, MN

When but six years old, Nathan conned his sweet little grandmother into buying him a record album. The cover pictured a man picking his nose, and what’s funnier to a six-year-old than boogers? That album was George Carlin’s “Class Clown,” and soon Nathan was the only child running around the playground shouting the “Seven Dirty Words You Can’t Say On Television.” Thus began Nathan’s descent into a career in stand up comedy.

Since those auspicious beginnings, Nathan has: performed at comedy clubs across the country, recorded several comedy CD’s—two of which receive regular airplay on Sirius/XM Satellite Radio—thrice visited the nationally syndicated Bob & Tom Show, been overseas for American Troops eight times—hotspots such as Iraq and Afghanistan included—and performed for international audiences in locations such as Seoul, South Korea. In 2009, nine newspapers wrote promotional articles about Nathan, and on two occasions he was the sole guest on Iowa Public Radio’s “The Exchange.”

To his mother’s delight, Nathan put his degree in English into use by writing of his exploits as a comedian. He has been lucky enough to find his musings published most prominently in the worldwide military newspaper Stars & Stripes. He currently writes for Rooftop Comedy, posting a mix of original work and interviews with comedic celebrities such as Rob Corddry and Margaret Cho.

Cutting past partisan politics and getting down to matters we all agree on is one of Nathan’s many skills as a wordsmith; though the media may try to separate us as a people, Nathan is here to unite all using one weapon: the sound of laughter.

A storyteller with the ability to hit with one liners, Nathan sticks close to home when it comes to material. He talks of his tours overseas, his daughter’s poopy diapers, and his experiences in getting his wife pregnant (which is material she doesn’t always appreciate).

Nathan currently lives near Iowa City, Iowa, with his wife, daughter, one cat, and a puppy named “Kitty.”

Lighting and a stage always helps a performance, but is not an all out demand.

Nathan's set is a mix of stories and one liners. Life experiences from performing for U.S. troops stationed in war zones and the fun of infertility experienced with his wife.